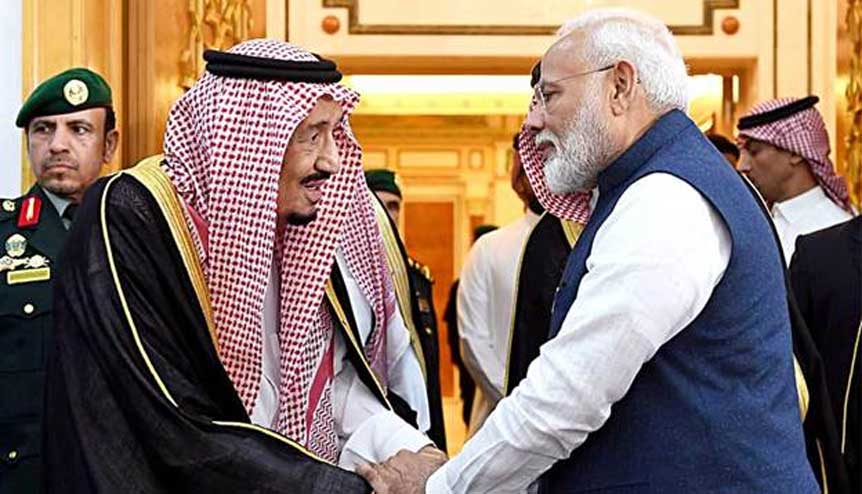 Indian prime minister Narendra Modi’s outreach towards the UAE and Saudi Arabia have been viewed as a tremendous diplomatic success. These positive engagements are turning into an oasis of economic and geopolitical opportunities. We examine India’s efforts to gain influence across multiple platforms in the GCC region in a series of analytical commentaries titled the India-GCC Special Series. 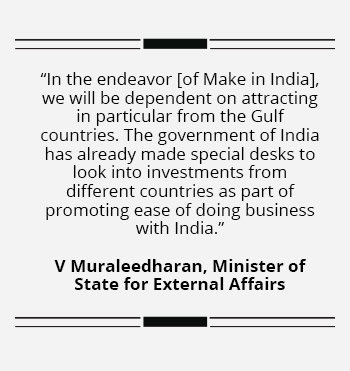 Narendra Modi created history in the Middle East in 2016, when he became the first Indian Prime Minister to visit the UAE in 34 years.

That marked the beginning of a bold new era in India’s West Asia outreach that took PM Modi also to Saudi Arabia, Iran, Qatar, Jordan and Ramallah, as well as back to the UAE in 2018.

While these visits certainly cemented a revitalized outlook for India towards the Middle East – or West Asia in Indian foreign policy parlance – often lost in that milestone moment is the fact that Modi was also the first Indian Prime Minister to visit Israel in 2016.

With the UAE and Bahrain normalizing their relations with Israel through the historic Abraham Accords this year, things have come a full circle for diplomacy and geopolitics in the region, as it moves beyond the binary of the Israel-Palestine peace process and the development of Arab economies. 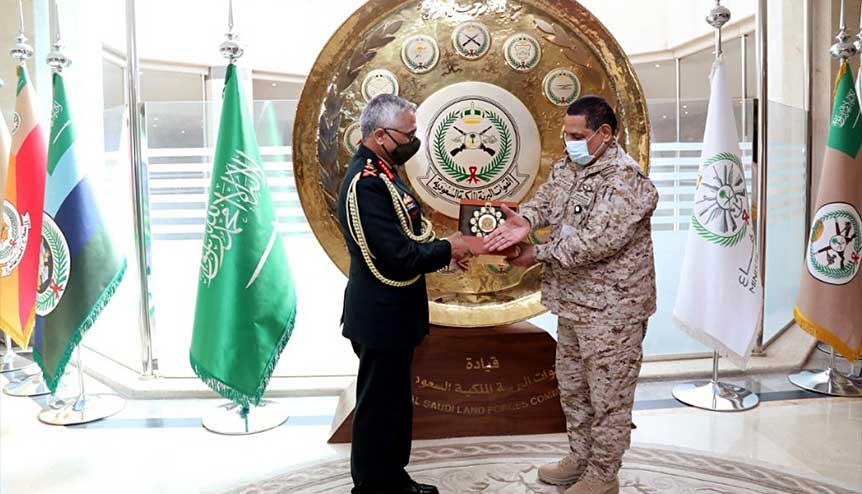 The evolving geopolitical equation of the Gulf region and its strategic relation with India can be gauged from the ongoing visit of Indian Army Chief General MM Naravane to Saudi Arabia, following his visit to the UAE last week.

According to the Indian Army, it is the first time that an Indian Army Chief is visiting the UAE and Saudi Arabia. “Chief of Army Staff General MM Naravane visited the Ministry of Defence in Riyadh and called on General Fayyad bin Hamid Ruwaili, Chief of General Staff CGS. He discussed issues of mutual interest and defence cooperation,” the Indian Army tweeted Sunday.

Last week, Gen Naravane met the commander of the UAE’s Land Forces and Staff Major General Saleh Mohammed Saleh Al Ameri for a similar discussion on mutual issues and defence cooperation. During his visit, Gen Naravane not only received a Guard of Honour at the headquarters of the UAE’s Armed Forces, but also laid a wreath at the Martyr’s Memorial of UAE soldiers who have died in action in Yemen and elsewhere.

The general’s visit is thus being seen by analysts and officials as the strongest reflection yet of India’s growing strategic clout with the Gulf Arab countries and is expected to further open up new avenues for cooperation in the defence and security sphere. 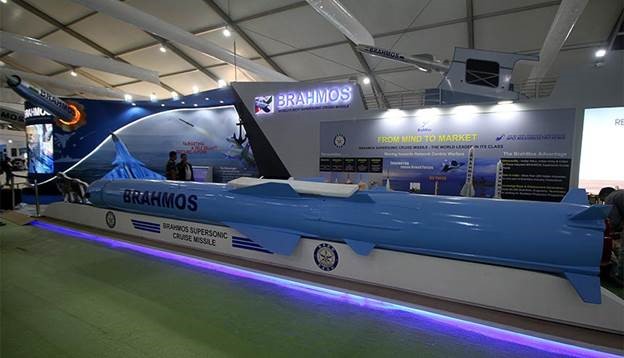 The Indian made Brahmos missile on display. The possibility of joint production of defence equipment has often been raised, while the UAE and Saudi Arabia have reportedly expressed interest in India’s BrahMos missiles.

The potential is, of course, immense.

With the limited but rapidly expanding defence cooperation between the Gulf states and India, Gen Navarane could discuss the possibility of separate, but regular joint military exercises with the UAE and Saudi Arabia.

In March 2018, India and the UAE conducted their maiden naval exercise “Gulf Star 1,” while in 2019, India and Saudi Arabia announced their first joint naval drills. Gen Naravane could use the meetings to bring those drills back on track after the forced hiatus due to the coronavirus pandemic.

The possibility of joint production of defence equipment has often been raised, while both the UAE and Saudi Arabia have reportedly expressed interest in India’s BrahMos missiles. That last prospect, according to Indian Express, is highly likely as per Indian defence sources, who told the newspaper that Gulf countries including the UAE and Saudi Arabia “have expressed interest in buying the Indo-Russian BrahMos Missile, and the talks are still in the early stages but further discussions were put on hold due to the global lockdown following the COVID-19 outbreak.”

Examples of defence collaboration between the Gulf and India have been growing in recent years. The UAE, for instance, has already said it was interested in the `Made in India’ Akash surface-to-air missile system, along with the indigenous Astra 70-km range air-to-air missile. 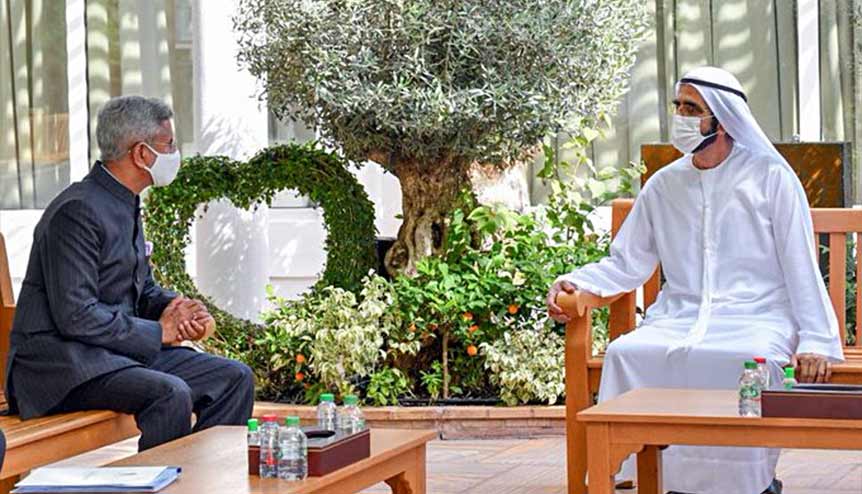 But security and defence are not the only glue bringing the Gulf closer to the Indian strategic sphere.

Gen Navarane’s trip itself follows a flurry of trips by Indian External Affairs Minister Dr S Jaishankar – who visited Bahrain and the UAE earlier this month, and further visits by top Indian officials to Qatar, Oman and Kuwait are to be undertaken soon.

Against the backdrop of India’s proactive outreach to Gulf states during the coronavirus pandemic and dispatch of rapid medical response teams to Kuwait and emergency nurses to UAE, the roll out of Covid-19 vaccines is being seen as an opportune moment for both India and its Gulf partners to recalibrate and reinvigorate their relationship.

It is also a moment where India’s central role with regards to the economic and geopolitical thinking of Asia and global economics has become very apparent.

India is looking west: Relations between New Delhi and the Gulf nations have undergone a fundamental reset –
Insightful piece by my Ministerial colleague @dpradhanbjp https://t.co/YVyScoZvMc 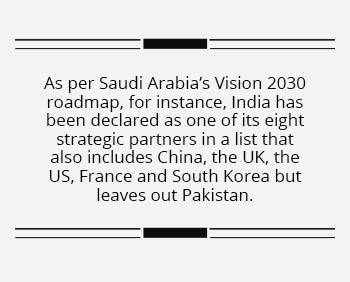 As per Saudi Arabia’s Vision 2030 roadmap, for instance, India has been declared as one of its eight strategic partners in a list that also includes China, the UK, the US, France and South Korea but leaves out Pakistan. The roadmap is the Saudi blueprint to diversify the country’s economy for its sustainability – although oil and gas are essential pillars of the Saudi economy, the government has begun diversifying the country’s investments into additional sectors domestically and abroad.

The ambitious economic diversification programmes of Gulf states such as Saudi Arabia and the UAE have provided India with timely opportunities to deepen cooperation in sectors such as space projects, healthcare, trade cooperation, food security and agritech as well as tourism. 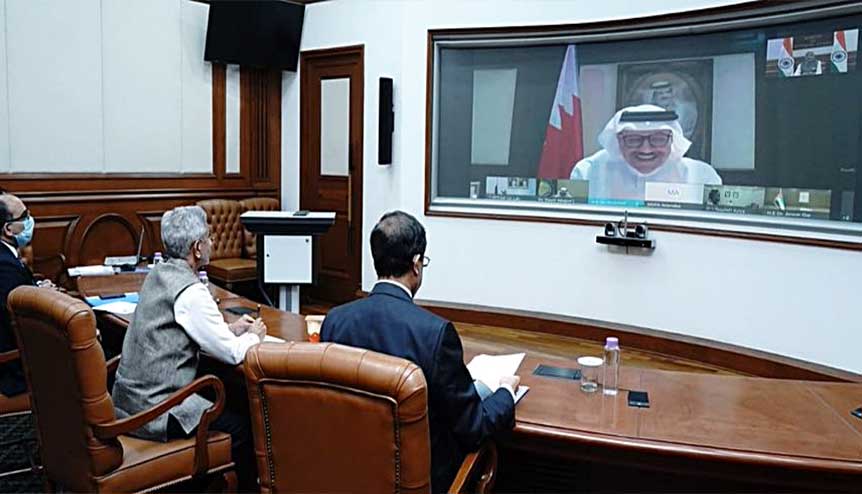 According to the Indian Minister of State for External Affairs, V Muraleedharan, the government has identified “sunrise sectors” for investors in the Gulf with the thrust on joint ventures in infrastructure and manufacturing, integrating into supply chains and tapping sovereign wealth funds. These sectors include food products, solar energy, electronic products, auto components, pharmaceuticals and telecom.

“In the endeavor [of Make in India], we will be dependent on attracting in particular from the Gulf countries. The government of India has already made special desks to look into investments from different countries as part of promoting ease of doing business with India,” the minister said.

Had excellent discussions on opportunities in Oil &Gas, #RenewableEnergy, #FDI and emerging technologies; and the need for institutional arrangements for skill recognition & upskilling our workforce.@narendramodi @DrSJaishankar @MEAIndia pic.twitter.com/ImeUCdOFhj

A relatively new area of partnership with the Gulf is in jointly exploring untapped markets in Africa and Central Asia. “Gulf countries with their surplus capital, open economies and connections with different regions of the world such as Africa, Central Asia and Europe are well placed to partner with India in this quest. This is a win-win proposition for both India and Gulf,” Muraleedharan added.

Whether in the field of defence, energy, food or medicine, India and the Gulf region are thus poised to transform their relations into the next great era of mutual progress and prosperity.