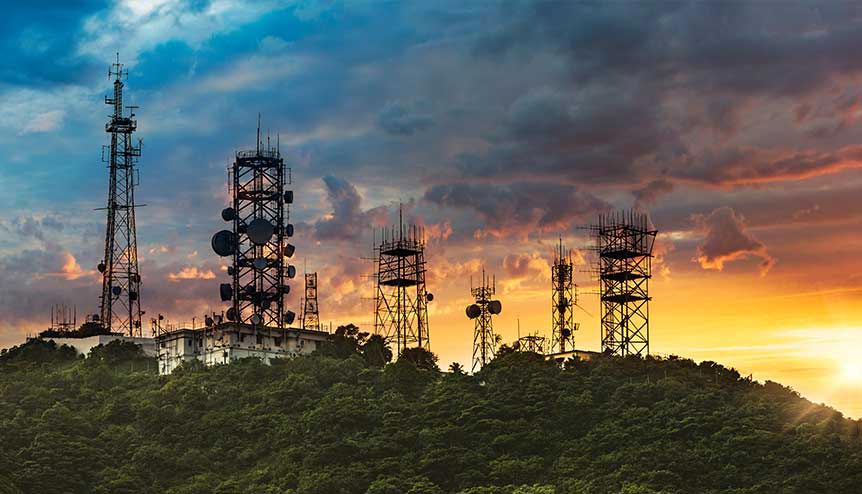 Falling debt levels and an expected doubling of earnings in the coming year are expected to improve the health of the Indian telecom sector. But legacy issues such as the payment of AGR dues and the exorbitant cost of 5G spectrum will have to be resolved for the sector to once again become one of the engines of India’s growth.

Indian telecom tariffs, the world’s lowest, could rise by up to 25 per cent over the next year. This will help the sector achieve sustainability and provide it the wherewithal to undertake the massive investments needed to upgrade their existing 2G-4G networks and roll out 5G systems that can revolutionise several other sectors and have a multiplier effect on the Indian economy.

Start-ups in the times of the coronavirus

Start-ups keep businesses rolling in India during a pandemic 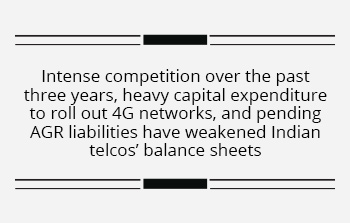 A recent report by Crisil, the Indian arm of global ratings agency Standard & Poor’s says: “Though operators did go for a significant tariff hike in December 2019, intense competition over the past three years, heavy capital expenditure (capex) to roll out 4G networks, and pending AGR liabilities have weakened their balance sheets. Therefore, increase in average revenues per user (ARPU) will be essential to strengthen credit profiles. Tariff hikes, rising 4G adoption and increasing data consumption by adopting content-led bundled pricing strategies could help boost ARPU growth. That could, in turn, beam up profitability, which will also help telcos invest in 5G networks over the medium term.”

That will be good news to every Indian operator, including Vodafone-Idea and Bharti Airtel, which are reeling from the blow of the Supreme Court order on the adjusted gross revenue case. In the case of the already profitable market leader Reliance Jio, an increase in ARPU will add straight to its bottom line.

Under the final order of the Supreme Court, Vodafone Idea and Bharti Airtel have to pay about $17 billion in AGR dues over a 10-year period.

The genesis of the AGR case

The Atal Bihari Vajpayee government had allowed the then fledgling private mobile telephony companies to migrate to a revenue sharing model wherein license holders would have to pay the government a percentage of their AGR in lieu of their fixed license fees and spectrum usage charges. 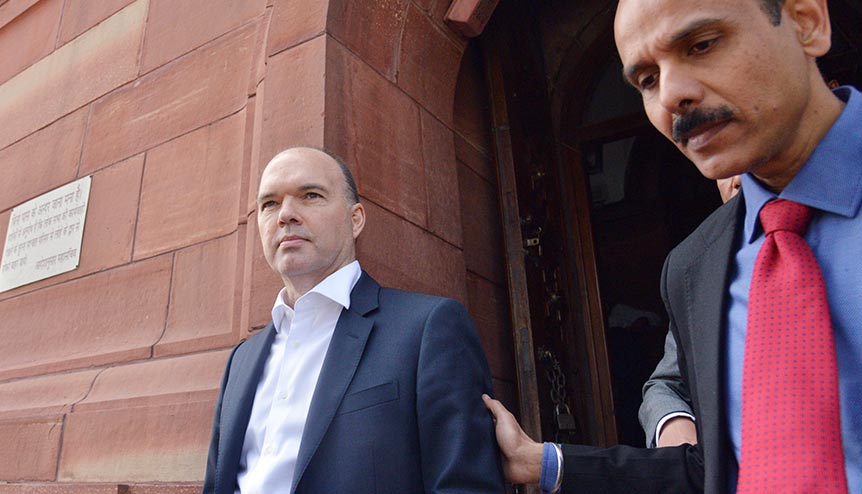 This judgment placed a massive financial burden on the telecom sector, especially on the second and third-largest players – Vodafone-Idea and Bharti Airtel. There were very real fears that this could kill Vodafone-Idea, cripple Bharti Airtel and reduce the booming Indian mobile telecom sector to an effective duopoly dominated by current market leader Reliance Jio. This would have hurt the prospects of an early 5G rollout, seriously impacted the quality of services and left a significant chunk of India’s 900 million telecom subscribers in the lurch.

But the 10-year payment period has provided the beleaguered telecom sector some breathing space. Both Vodafone-Idea and Bharti Airtel have said they will honour the judgment. Analysts, who had been writing off the former, now feel the sector can turn the corner and get back on the growth track over the medium term.

ARPUs set to rise next year The Covid-induced lockdown and the increasing acceptance of work from home (WFH) in a growing number of industries is proving to be a shot in the arm for the Indian telecom sector.

“Our base case assumes monthly ARPU reaching Rs 175-180 (about $2.50) by next fiscal from about Rs 140 ($1.95) in the first half of the current fiscal so as to generate a sustainable RoCE of about 10 per cent. Of course, this will depend on competitive intensity, but it can crank up industry revenue to over Rs 2 lakh crore ($28 billion) next fiscal, or a third more than the Rs 1.5 lakh crore ($20 billion) seen in fiscal 2020, despite muted subscriber growth,” the report quoted Sachin Gupta, Senior Director, Crisil Ratings, as saying. 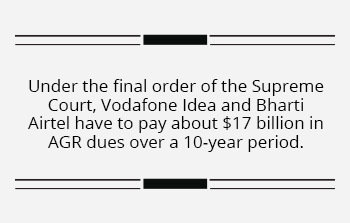 The Covid-induced lockdown and the increasing acceptance of work from home (WFH) in a growing number of industries is proving to be a shot in the arm for the Indian telecom sector. With increasing use of apps such as Zoom, Microsoft Teams, Skype, House Party, etc., both for work and family meetings and with the rising popularity of streaming platforms like Netflix, Amazon Prime and others, data usage is on the rise and this is helping shore up the top and bottom lines of Indian telcos.

This is expected to lead to a 28-30 per cent increase in data usage per subscriber to about 15 GB by March 31, 2021. Analysts, however, will be keeping a close eye on whether this spike in data usage will be sustained once the Covid pandemic blows over and the situation returns to normal. 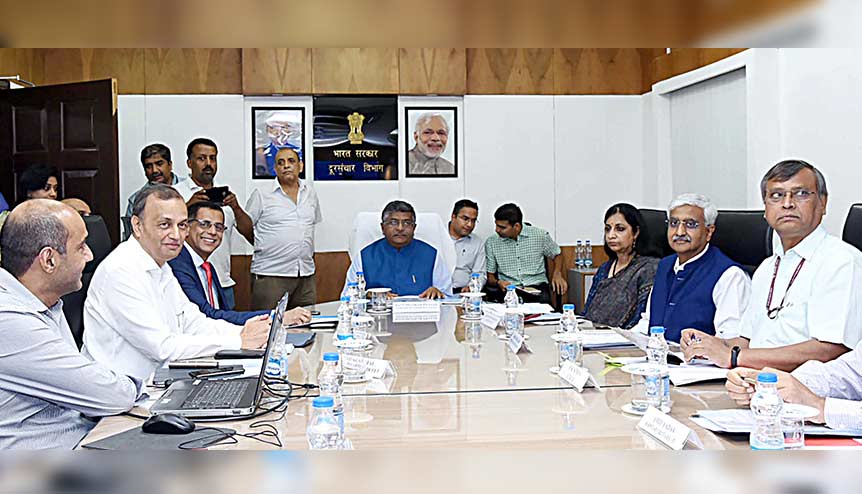 Union Minister for Law & Justice, Communications and Electronics & Information Technology Ravi Shankar Prasad in a meeting with the CEOs of Telecom companies. The rise in tariffs will help bring in revenue and strengthen credit profiles.

Despite improving operating metrics, the debt levels of telcos will continue to be a constraining factor. Improvement in profitability, coupled with sizeable equity infusion of about $23 billion in fiscal 2020 had helped reduce the debt level from about $47 billion a year ago to a much more manageable $38 billion now.

EBIDTA will double in the coming year

Crisil estimates that the growth in ARPU, the reduction in debt and its servicing obligations and a general improvement in the operating environment will increase the sector’s EBITDA $11 billion this year from half that amount last year.

“The debt-to-Ebidta ratio will remain high at above four times in fiscal 2021 as the sizeable AGR liabilities will continue to weigh on the credit profiles of telcos. But, it is pertinent to note that despite getting relief in AGR payment terms, at this juncture, sponsor support, sizeable tariff hikes, and prudent capex would remain crucial to support the credit profile of telcos,” said Nitesh Jain, Director, CRISIL Ratings.

Not yet out of the woods 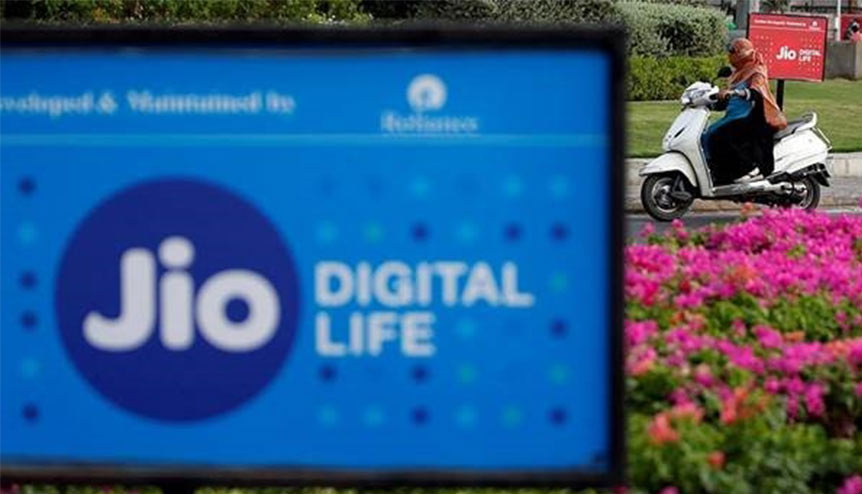 There’s a huge question mark over the high reserve price set by the Indian government for the auction of 5G spectrum, which all the telcos have said is “exorbitant.

This is not to suggest that the Indian telecom sector is completely out of the woods. Considerable challenges remain. It will have to raise more than $30 billion to fund the 5G rollout that is crucial to India’s ambitions of remaining at the cutting edge of global innovation.

Then, it will have to contend with the expected curbs on sourcing technology and equipment from Chinese vendors, which will increase the cost of both the 5G rollout and regular network maintenance and upgrades by an expected 20-25 per cent. 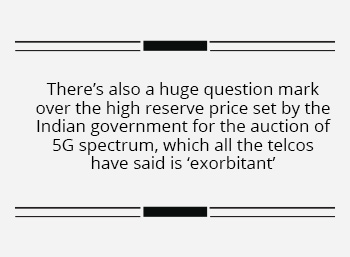 There’s also a huge question mark over the high reserve price set by the Indian government for the auction of 5G spectrum, which all the telcos have said is “exorbitant”. This issue will have to be resolved to the satisfaction of all stakeholders – the government, the telcos, consumers and the regulator – as a quick and seamless 5G rollout is critical for the rapid growth of the Indian economy.

But these are issues that the industry will have to tackle in future. For now, there’s light at the end of the tunnel. For an industry, whose very existence seemed at stake a few months ago, that itself is a huge positive.