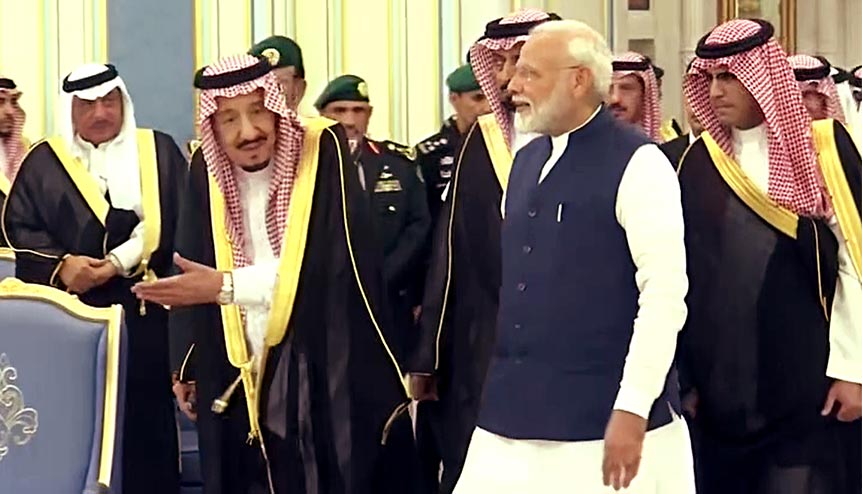 With significant headroom in various sectors of the Indian economy and spurred by the Modi government’s consistent courtship, trade between Gulf states and India aims for a new high. 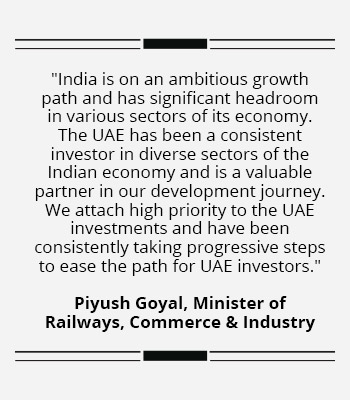 While India and the six countries that make up the Gulf Cooperation Council (GCC) states have shared trade links and commodity barters through the centuries, the real impetus for strategic commercial relations began in the 1990s, when Dubai started positioning itself as a regional trading hub and a connector of freight and passengers from around the world.

That was the time when India, discovering its feet after the sudden liberalization of the economy in 1991, had also started opening up to trade in the Gulf states that went beyond the traditional staple of dates, pearl, fishes and downstream products.

Nearly three decades later, that new impetus is back in business between India and the Gulf – backed by new age capital and investments in sectors such as renewable energy, healthcare, agritech and space science. Of that, the UAE continues to form the backbone of India’s commercial partnership with the Gulf, comprising nearly 80% of the total trade. 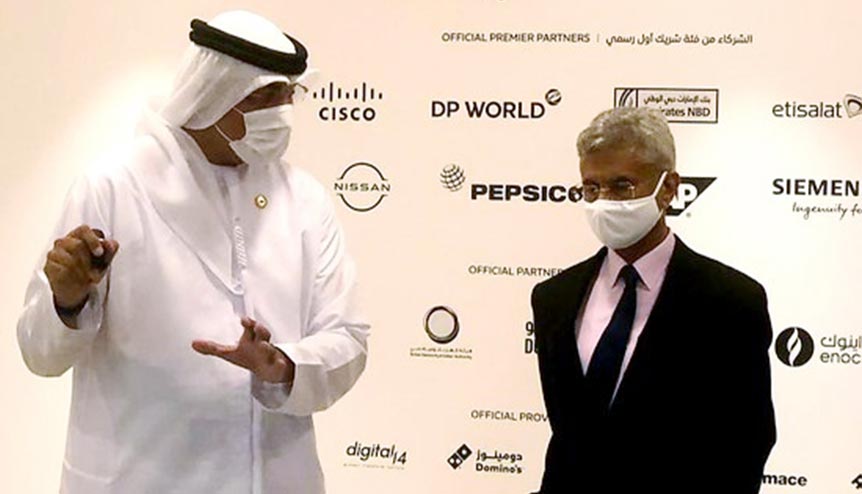 Indian External Affairs Minister of India Dr. S Jaishankar at the India pavilion at Expo 2020 site. Trade between the two countries – which currently stands at $60 billion a year – could be expected to grow further in the future.

From its humble days of bilateral trade valued at $180 million per annum in the 1970s, India and the UAE today conduct business worth nearly $60 billion every year – making UAE India’s third largest trading partner for 2019-20 after China and the US. Moreover, the UAE is the second largest export destination of India after the USA, worth nearly $30 billion for 2019-20. For the UAE, India is the second largest trading partner for 2019 with transactions worth $42 billion in non-oil trade.

The trade and commercial relations have not only contributed to the stability of the deepening bilateral relationship between India and the UAE, but have also brought the wider ambit of the Gulf’s strategic investments into play as long-term stakeholders in the development of New India and vice versa.

UAE-India partnership in this sector can make healthcare delivery more affordable and sustainable by making world class pharma products available to a larger population in the GCC region @IndembAbuDhabi https://t.co/WuzspmjB5F

“The pattern of Gulf investment in India has three notable characteristics. First, over the past decade, the aggregate value has risen dramatically. Second, the United Arab Emirates has emerged as the most important source by far of Gulf FDI. Third, the surge in UAE investments in India is illustrative of the broader trend in Gulf FDI, namely that it has targeted those sectors of the economy that Indian authorities have designated as their highest priorities and that it is marked by a proliferation of entities investing in an ever-widening array of projects,” said Biswajit Nag and Mohit Gupta in a policy paper for the Middle East Institute. 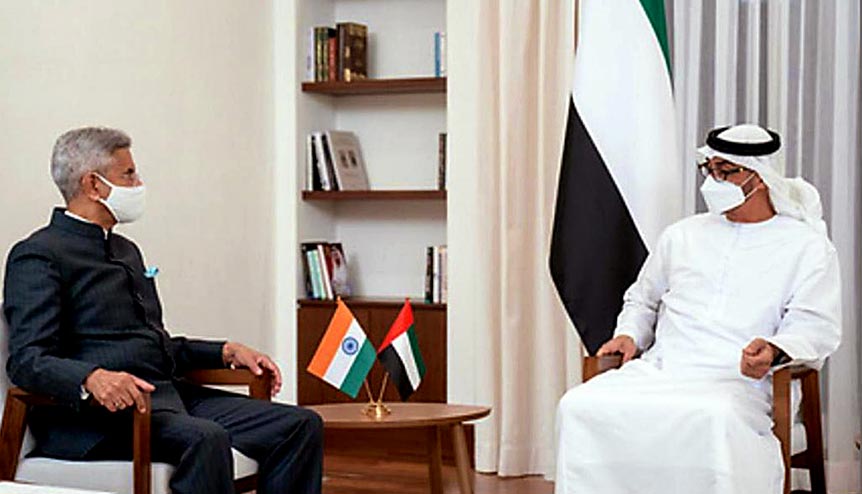 One reflection of that is in the range of recent incentives offered by the Indian government to investors from the Gulf. Beginning in 2021, for instance, India will grant tax exemptions for UAE institutions seeking to invest in infrastructure, with other sectors to be granted similar privileges in the future.

While several UAE companies have already invested in Indian airports and the energy sector, in light of the UAE’s normalization of relations with Israel, Gulf states may now be more politically in line with Indian interests. With the friendly relation between Indian Prime Minister Narendra Modi and Israel’s Benjamin Netanyahu on the one hand, and Modi’s assiduously-built bonhomie with Gulf leaders such as Abu Dhabi Crown Prince HH Sheikh Mohammed Bin Zayed Al Nahyan and Saudi Crown Prince Mohammed bin Salman, New Delhi stands to benefit immensely from its deepening ties with the Gulf and Israel. 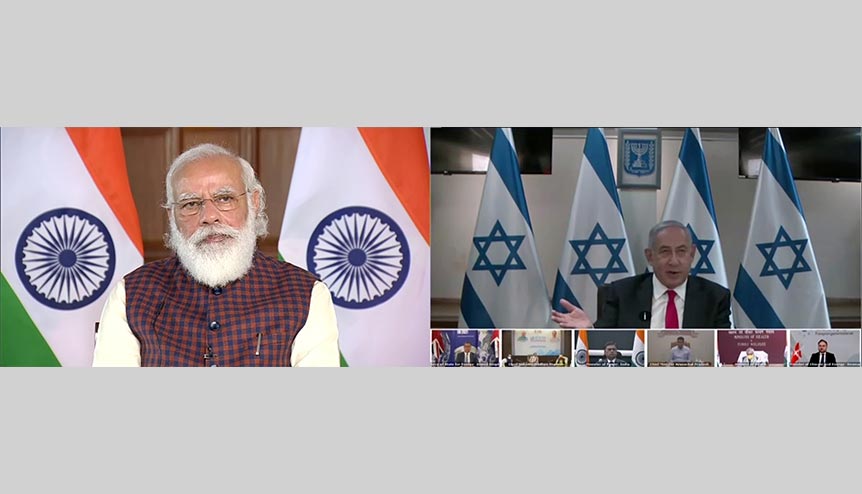 Indian PM Narendra Modi with his Israeli counterpart Benjamin Netanyahu. In light of the UAE’s normalization of relations with Israel, Gulf states may now be more politically in line with Indian interests.

“India’s geopolitical interests are in close alignment with those in the moderate Arab Centre – including Egypt, Jordan, Saudi Arabia, the UAE and Oman,” said C. Raja Mohan, director of the Institute of South Asian Studies at the National University of Singapore. “Opposing the forces of regional destabilization must be at the very heart of India’s new engagement with the Middle East,” he wrote.

Evidence of that was in ample display at the eighth meeting of the UAE-India High Level Joint Task Force on Investments, hosted by India last month in a virtual format due to the COVID-19 pandemic.

Created in 2012 to strengthen economic relations between the UAE and India, the mechanism has assumed greater importance as the two countries entrench the Comprehensive Strategic Partnership Agreement signed in 2017.

🔹”Coordination between the two countries during the peak of #COVID19 minimised disruption in the supply chain.”

From setting up a UAE special desk called UAE Plus to the Fast Track Mechanism created in 2018 to facilitate investments and resolve any challenges experienced by UAE investors in India, to prioritising civil aviation cooperation and new opportunities for potential investments in key sectors in India such as healthcare and pharma industry, logistics, agriculture and energy, the latest session of the task force provided an insight into the ever-deepening trade ties and the rapid deployment of what has come to be known as Khaleeji (Gulf) capital into India.

“This Joint Task Force is an integral component of our comprehensive strategic partnership with the UAE. India is on an ambitious growth path and has significant headroom in various sectors of its economy. The UAE has been a consistent investor in diverse sectors of the Indian economy and is a valuable partner in our development journey. We attach high priority to the UAE investments and have been consistently taking progressive steps to ease the path for UAE investors,” said Piyush Goyal, Indian Minister of Railways and Commerce & Industry.

The Ambassador @drausaf met H.E. Bandar Ibrahim Alkhorayef @bAlkhorayef, Saudi Minister of Industry and Mineral Resources. They discussed about areas of industrial collaboration and post pandemic cooperation to boost both the economies along with other topics of mutual interests. pic.twitter.com/6OOz5lGxtJ 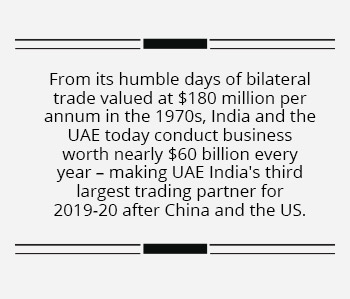 The ultimate testament to India’s dynamic commitment in boosting trade relations with the Gulf and resilience in facing any challenges, however, came from the managing director of one of world’s largest sovereign wealth funds. “The past decade has witnessed a positive transformation in the economic relationship between the UAE and India. I believe that the commitment of this Task Force over the past eight years has been central to that success,” said Sheikh Hamed bin Zayed Al Nahyan, the MD of Abu Dhabi Investment Authority.

“Although recent months have been difficult for us all, we have today set out an ambitious agenda for the next stage of our economic co-operation. I am convinced that we can return to significant growth in our bilateral trade and investment in the years ahead,” he said.