India and the Gulf: Centuries of building strategic partnerships

India and the Gulf: Centuries of building strategic partnerships 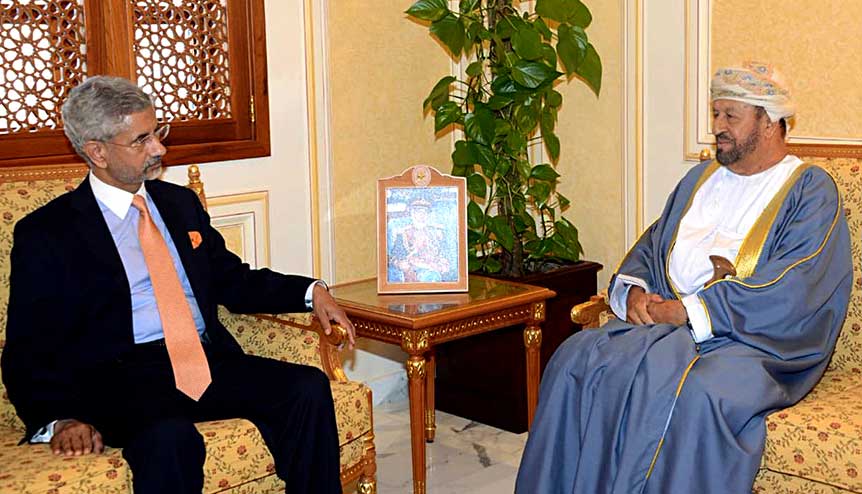 India’s long history of relations with the Arabian peninsula has emerged as the X-factor in robust trade and commercial ties, some of which have withstood for centuries. A fresh, sustainable path which is full of expectation and promise is now being created to usher in a new era of bonding. 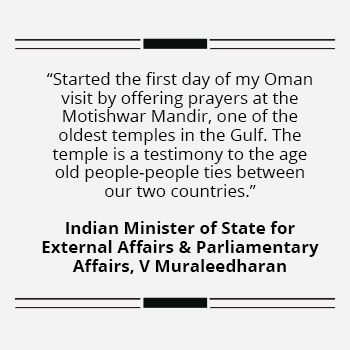 When Indian Minister of State for External Affairs & Parliamentary Affairs, V Muraleedharan, started his visit to the Gulf sultanate of Oman this week, his first place of call on Wednesday morning was the Motishwar Mandir – a century-old Shiva temple in the heart of Muscat.

“Started the first day of my Oman visit by offering prayers at the Motishwar Mandir, one of the oldest temples in the Gulf. The temple is a testimony to the age-old people-people ties between our two countries,” the minister tweeted shortly thereafter on Wednesday. The temple – believed to have been constructed around 125 years ago by the Gujarati merchant community in Oman, is indeed an enduring symbol of the centuries-old ties that bind India and Indians with the Arabian peninsula. The Bhatia merchant community – which built the temple in Oman – first migrated from Kutch in Gujarat to settle in and around Muscat way back in 1507 and has been a pillar of the Indian merchant community in the Gulf ever since.

But people-to-people contacts between the Indian sub-continent and the wider Arabian peninsula flourished centuries before that – and the annals of history are full of records of the same.

🇮🇳|🇴🇲 Started the first day of my Oman visit by offering prayers at the Motishwar Mandir, one of the oldest temples in the Gulf. The temple is a testimony to the age old people-people ties between our two countries. @narendramodi @DrSJaishankar @MEAIndia @Indemb_Muscat pic.twitter.com/Q6eRqlXe5g

The civilization of Dilmun, which was located on the Gulf island of Bahrain and the adjacent shore of Saudi Arabia, acquired a monopoly on trade between the Indian subcontinent and Mesopotamia, with historical artifacts demonstrating that traders from the region stayed for extended periods in South Asia in search of commodities elusive to the area – mainly cotton and spices. Their quest was also reciprocated by Indian merchants – who would frequent the region with their precious supplies. 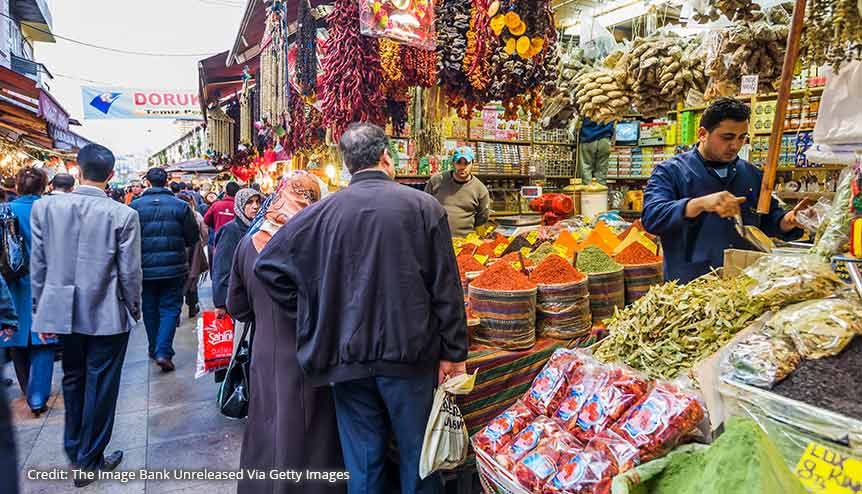 Trade relations between India and the wider Arabian peninsula go back centuries when Arab traders from Yemen and Oman sourced in demand goods like frankincense, cotton and spices from India.

In the later centuries, trade between India and the Arabian peninsula came to be mostly dominated by Arab traders from Yemen and Oman, with Yemen becoming a trading hub for frankincense and myrrh. The Gulf – and especially Oman – became natural connectors of trade on the Indian Ocean between India, the Middle East and East Africa, so much so that by the end of the first millennium CE, trade between India and Arabia became the economic backbone of the Arabian peninsula.

Interestingly, nearly a thousand years ago, most of the commodities being traded flowed from India toward the Arabian peninsula – while cash and cash-equivalent barters flowed from Arabia to India. After the intervening centuries marked by the rise of the pearl industry, the British colonial history of both India and the so-called Trucial States and the discovery of oil in the Gulf, trade between India and the Gulf has once again picked up the same momentum – with the Gulf Cooperation Council (GCC) states becoming a formidable bloc of trading partners for India. 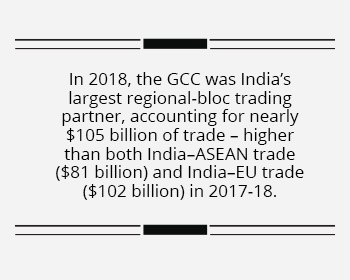 In 2018, the GCC was India’s largest regional-bloc trading partner, accounting for nearly $105 billion of trade – higher than both India–ASEAN trade ($81 billion) and India–EU trade ($102 billion) in 2017-18. Traditionally, the GCC has also provided between $35 billion to $40 billion in foreign-exchange remittances from Indian expatriates every year, accounting for more than half of India’s total.

The UAE – which was the first Gulf country Indian Prime Minister Narendra Modi visited in August 2015 during his first term – has elevated its relations with New Delhi to the level of a Comprehensive Strategic Partnership and aims to increase bilateral trade by 60 per cent, setting a target of $75 billion in investments into India’s infrastructure development, spanning ports, airports, highways and construction, as well as petrochemical projects.

But well beyond trade, India’s increasing political and economic stature on the global arena – combined with sweeping political reforms and liberalisation of trade and energy policies in the Gulf – have dramatically elevated the strategic dimension of New Delhi’s relationship with the Gulf. The increase in bilateral trade has given new impetus for cooperation with the strategically located Gulf states, while India’s historical relations with the region have motivated leaders from both sides to strengthen ties. 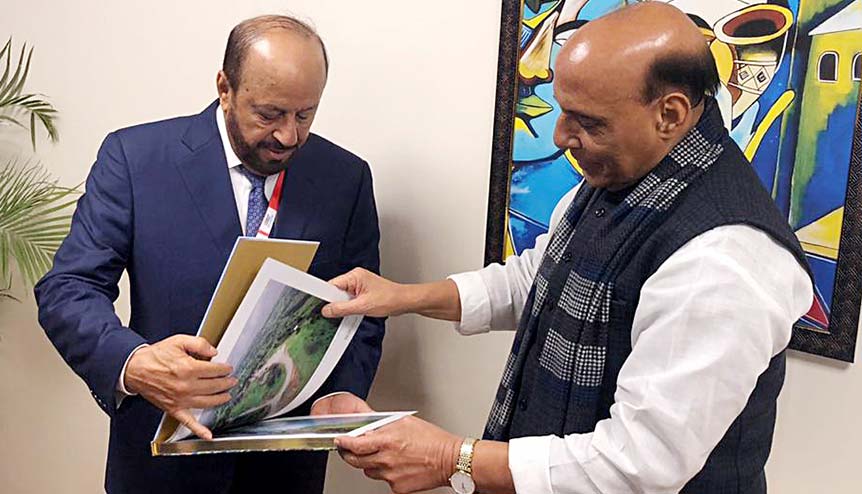 Significantly, while India’s engagement with Arab and Gulf states has become deeper since Prime Minister Modi came to power in 2014, the past six years have also coincided with a significant deterioration of Pakistan’s relations with the region, especially with the UAE and Saudi Arabia. “The geopolitical realignment in the Middle East, marked by the agreement on the normalisation of relations between the United Arab Emirates and Israel, intersects with the equally significant reorientation of the Subcontinent’s relationship with the region. As Pakistan rediscovers its tradition of aligning with non-Arab powers, India must renew its defence of Arab sovereignty,” said C Raja Mohan, Director, Institute of South Asian Studies, National University of Singapore. “Standing up for Arab sovereignty and opposing the forces of regional destabilisation must be at the very heart of India’s new engagement with the Middle East,” he said in a column for Indian Express.

India’s post-pandemic overtures and flurry of diplomatic visits to the Gulf all point to the same direction adopted by the government. And from the centuries-old temples of Oman to the glistening BAPS temple being constructed in Abu Dhabi, these enduring symbols of friendship and prosperity have only worked to highlight the strategic depth of India’s historic trade and commerce ties with the Arabian Gulf.