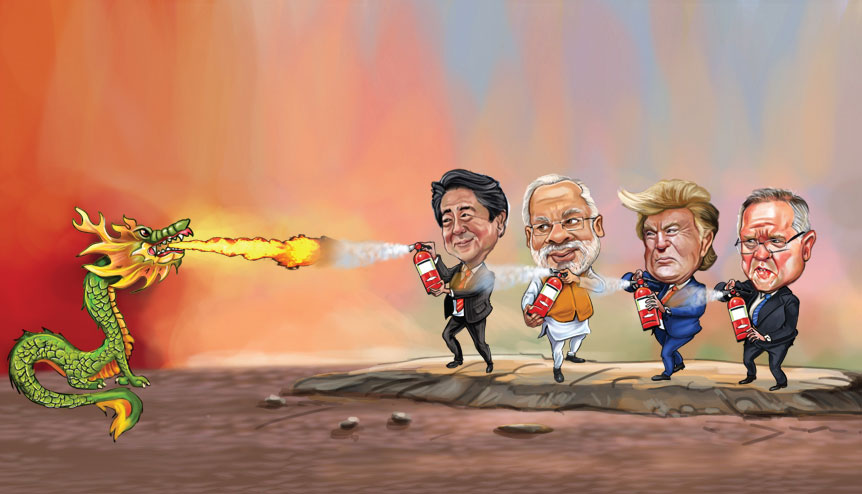 A battle-hardened military, decades-long experience in high altitude warfare together with India’s recent elevation to the Chair of the WHO Executive Board, its election to the UNSC and its close diplomatic ties with like-minded democracies such as the US, Japan, France, Israel, the UK and others will help it counter Beijing’s aggression.

As Indian soldiers face an aggressive and expansionist China in Ladakh, many foreign policy and defence analysts are of the view that New Delhi must adopt a multifaceted approach – encompassing defence preparedness, cyber security, multilateral pressure, diplomacy and providing friendly countries with a viable alternative to the highly exploitative and neo-colonial Belt and Road Initiative – to counter the Chinese threat.

Related stories: India holds the key to the success of Quad 2.0

India has a military edge 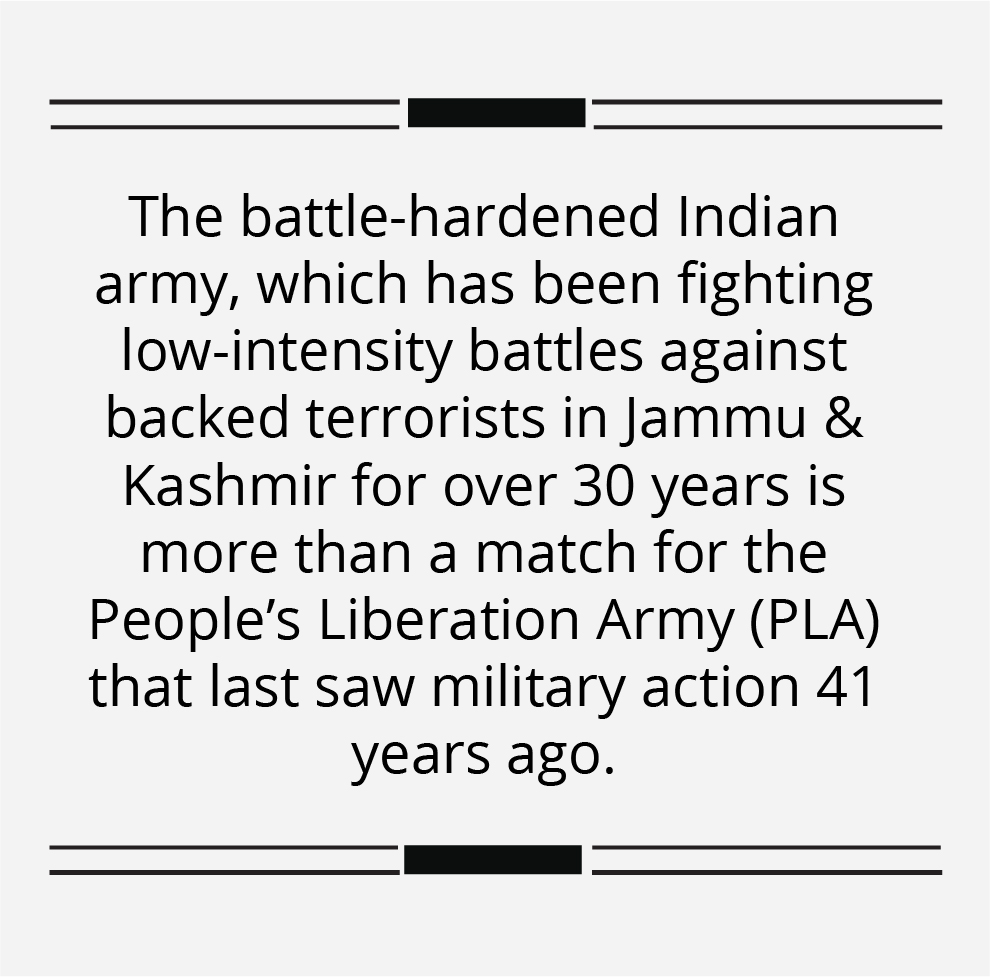 A June 2020 study by the Center for a New American Society (CNAS), Washington, and the Robert and Renee Belfer Center for Science and International Affairs at the John F Kennedy School of Government in Harvard University, says the battle-hardened Indian army, which has been fighting low-intensity battles against Pakistan-backed terrorists in Jammu & Kashmir and several insurgencies in its North East for over 30 years is more than a match for the People’s Liberation Army (PLA) that last saw military action in 1979, or 41 years ago, when the much smaller Vietnamese army gave it a bloody nose.

China overwhelming overall superiority – man to man as well as machine to machine – over India counts for little, as the Belfer Center estimates that India has 225,000 troops in the potential conflict zone facing about 200,000 to 230,000 Chinese soldiers, which include battalions whose main job is enforcing internal security in Xinjiang and Tibet. So, the actual number of Chinese soldiers available to fight Indian forces could be lower. 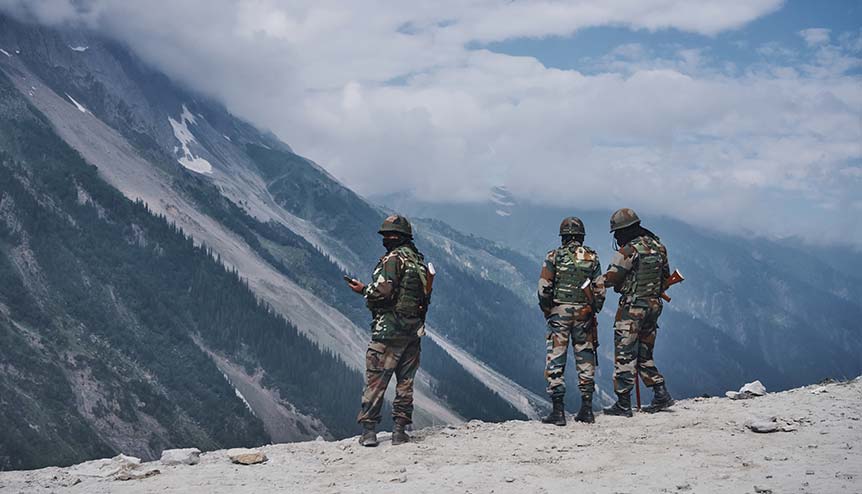 Indian army soldiers in Kashmir. The Indian military’s familiarity with high altitude mountain warfare will give it an advantage over Chinese forces, who have no such experience.

Then, the Indian Army has experience of over three-and-a-half decades of fighting in the Siachen Glacier, the world’s highest battlefield. Conducting a battle at high altitudes is very different from fighting at lower heights. And here, the Indian military’s familiarity with high altitude mountain warfare will give it an advantage over Chinese forces, who have no such experience.

Indian Air Force enjoys an advantage on this terrain

In March this year, the Belfer Center published a study in which it estimated that India could bring 270 fighters and 68 ground attack jets to an air conflict with China. Beijing, on the other hand, has 157 fighter jets and an unspecified number of ground attack drones stationed in the potential theatre of conflict.

Though the PLA Air Force has about two-and-half times India’s 550-odd combat aircraft, they are widely dispersed across China’s many potential zones of conflict – against the US, Taiwan, Japan, Vietnam, Russia and India.

“The high altitude of Chinese air bases in Tibet and Xinjiang, plus the generally difficult geographic and weather conditions of the region, means that Chinese fighters are limited to carrying around half their design payload and fuel,” says the study.

Thus, India enjoys a clear advantage both on the ground and in the air.

The battle in cyberspace 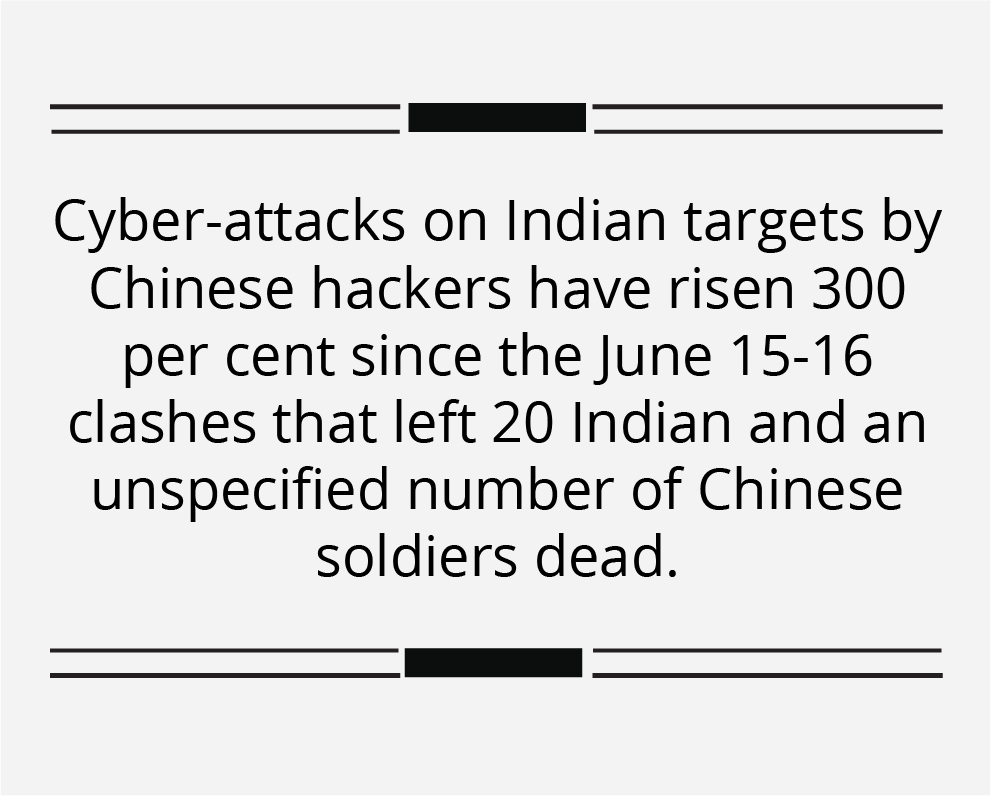 Away from the arc lights, China has opened another large front against India – in cyberspace. China is widely acknowledged as having among the most sophisticated cyber warfare capabilities in the world.

According to Singapore-based cyber research firm Cyfirma, cyber-attacks on Indian targets by Chinese hackers have risen 300 per cent since the June 15-16 clashes that left 20 Indian and an unspecified number of Chinese soldiers dead. The firm has shared its findings with the Computer Emergency Response Team (CERT-In), the nodal Indian agency dealing with this issue.

The latest such attack took place on the National Highway Authority of India (NHAI). This comes amidst reports that India is likely to bar Chinese companies from the country’s multi-billion-dollar highway construction contracts. However, the security breach was detected in time and no data was lost. 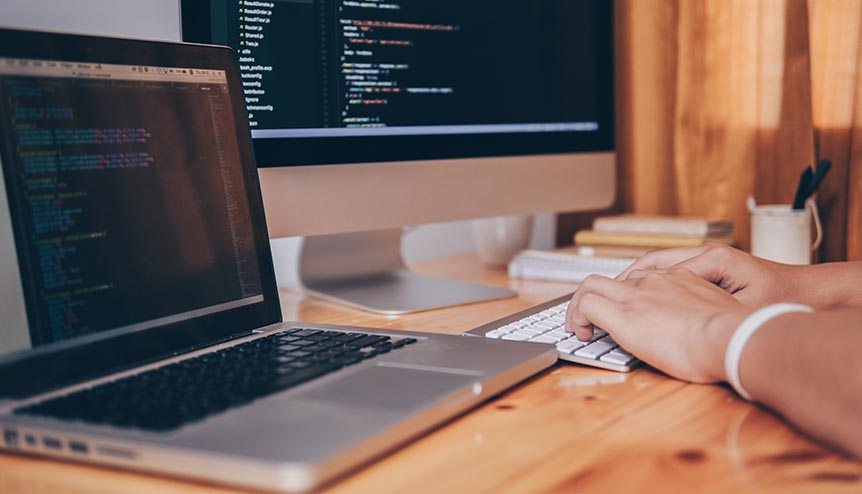 China has opened attack on another front against India in cyberspace with cyberattacks increasing 300 per cent after the Galwan Valley face-off.

Historically, India has neglected cyber security and so, has to quickly ramp up its cyber warfare capacity commensurate with its economic heft and military standing. It was only after Narendra Modi came to power in 2014 that Indian planners began looking at this critical area of modern warfare more holistically. Since then, India has signed agreements on cyber security with Israel, which is considered a world leader in this space, France, the US, the UK and Germany.

Indian and Israeli intelligence agencies and military have a high level of cooperation in this area. Some for agencies like the National Technical Research Organisation, Israel is by far India’s most important foreign collaborator in this sector.

But India is making up for lost time by leveraging its world-beating IT capabilities to ramp up its cyber security and warfare capabilities. However, as a result of historical neglect, this is one area in which India lags behind China by a wide margin. 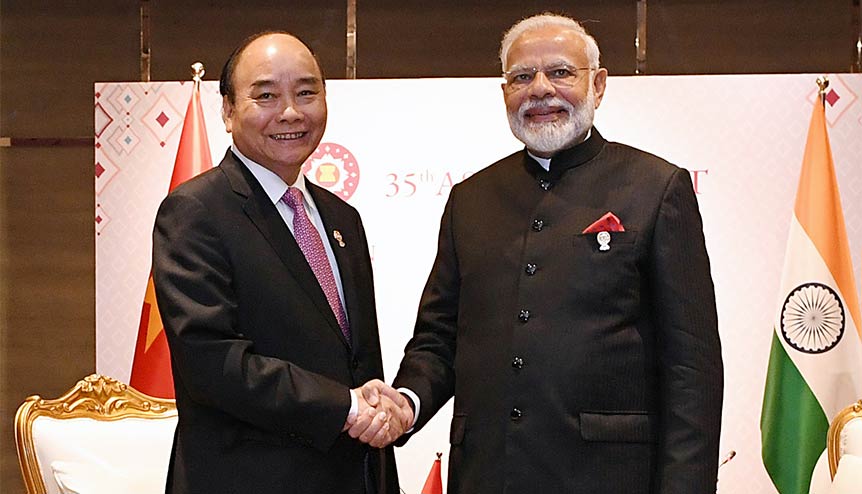 Indian Prime Minister Narendra Modi with Vietnamese Prime Minister Nguyen Xuan Phuc on the sidelines of 16th India-ASEAN Summit, 2019. India’s proactive diplomacy over the past six years has ensured that India has excellent relations with most countries, including those that China has ongoing disputes with.

China has ongoing territorial and/or trade disputes with the US, Japan, Australia, Vietnam, Indonesia, the Philippines and Taiwan. Indian Prime Minister Narendra Modi’s proactive diplomacy over the past six years has ensured that India has excellent relations with all these countries.

The multilateral goodwill that India enjoys is evident from the enhanced military support that India is receiving from its allies. France, Israel, the US and Russia have all committed to supplying India with additional fighter jets, air defence systems, precision guided ammunition for howitzers and real-time intelligence to help New Delhi face up to the imminent Chinese threat. In this context, the scope of the Quad, comprising India, the US, Japan and Australia, can be expanded, as many strategic experts envisage, into a more concrete grouping that could ensure the security and freedom of Asia – on the lines of NATO. 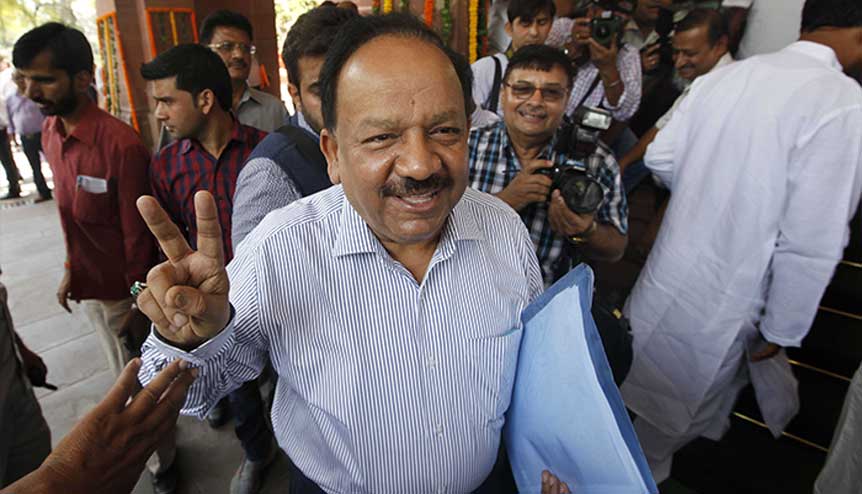 India’s Health Minister, Dr Harsh Vardhan, also the Chair of the Executive Board of WHO, can play a leading role in ensuring a fair, impartial and independent probe into WHO’s response to the Covid-19 outbreak.

Unravelling the truth behind Covid-19 outbreak

India’s Health Minister, Dr Harsh Vardhan, was recently elected Chair of the Executive Board of the World Health Organization (WHO). This comes at a time when the organisation has been accused of covering up Chinese complicity in the spread of the global pandemic.

In this position, India can play a leading role in ensuring a fair, impartial and independent probe into WHO’s response to the Covid-19 outbreak. It may be recalled that WHO had gone out of its way to praise China for providing information on the virus even though its own officials were struggling to elicit anything useful on the pandemic from Chinese officials.

This investigation, which is backed by 62 nations, including the European Union, Australia and India, can help unravel the truth behind the game of smoke and mirrors that China has allegedly indulged in.

India’s return to the United Nations Security Council as a non-permanent member for a two-year term demonstrated the goodwill and diplomatic clout the Modi government enjoys in the comity of nations. India has said it will use this position to fight terrorism, and help the world find a multilateral solution to the Covid-19 pandemic.

This position will also help New Delhi counter Chinese pressure on the border as bolster efforts to ensure a peaceful and free Asia. 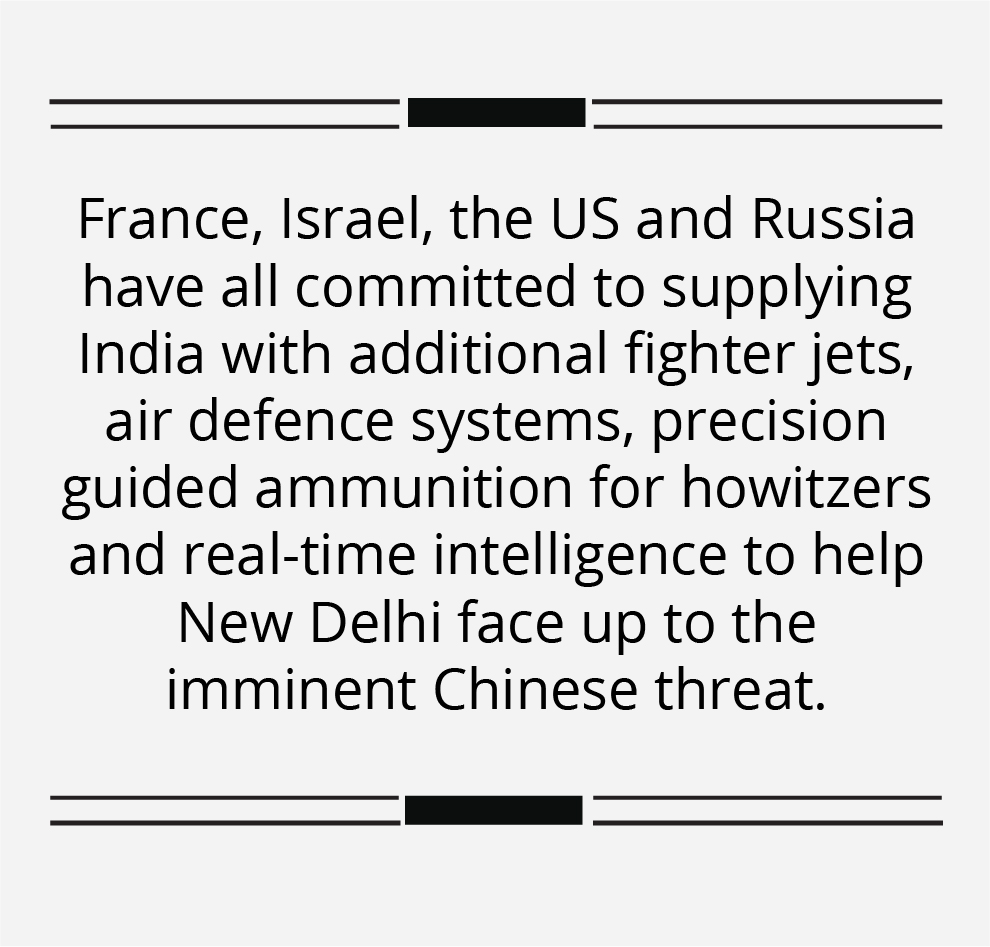 India has refused to be part of the Belt and Road Initiative (BRI) because it is a thinly veiled attempt by China to establish itself as the new Asian hegemon. Japan and the US also share similar misgivings about this project, which envisages building an international network of roads, railway lines, ports, pipelines and other infrastructure spanning Asia, Europe and Africa that will place China at the centre of the global economic and political matrix.

To counter this, India and Japan have agreed to jointly develop infrastructure in countries such as Sri Lanka, Bangladesh, Nepal, Myanmar, other parts of South East Asia and Africa.

However, the pace of progress has been relatively slow. The two countries need to hasten the pace of infrastructure development in these countries in order to prevent China from co-opting them into its own sphere of influence.