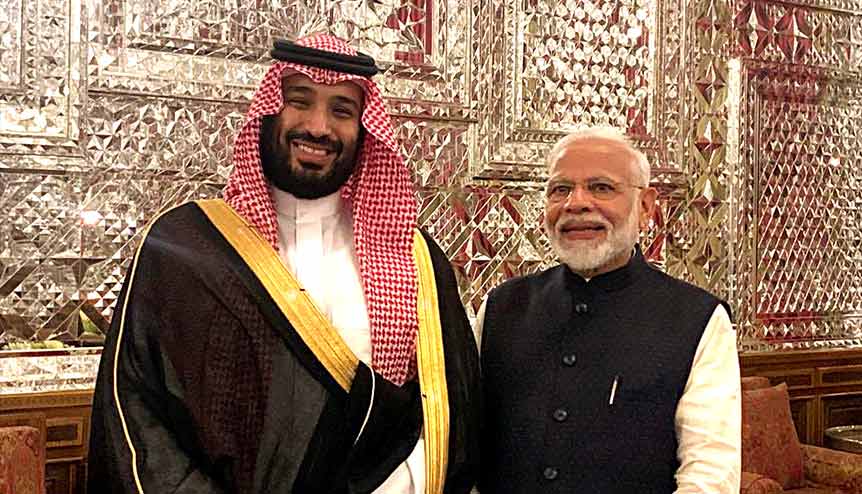 Beyond the mutual trade of $120 billion, a free trade pact will be a gamechanger for New Delhi and Gulf capitals. 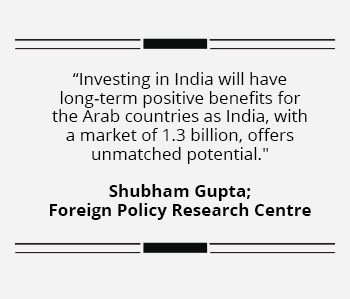 It is a partnership that has brought stability to global oil prices, collaborated over a wide diversity of sectors ranging from space science and AI to healthcare and food security, and helped boost the inflow of foreign direct investment (FDI) into each other’s territories even amid a general decline in investments.

Yet, India’s rapidly growing trade with the bloc of Gulf Cooperation Council (GCC) states has gained a salience that is beyond its headline-grabbing value of $120 billion, looking forward to a much-expected free trade agreement (FTA) that has been in the works for some time. 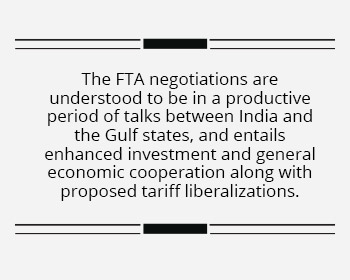 “India, which is a maritime neighbour, with its $2.6-trillion economy, massive consumption of energy resources and a robust defence apparatus, fits into the Gulf countries’ notions of a strategic partner. Economically, India and the Gulf are more connected today than ever before. The United Arab Emirates (UAE) and Saudi Arabia are India’s third and fourth-largest trading partners respectively and the total bilateral trade of the GCC countries with India for the year 2018-19 stood at $121.34 billion. UAE also features in the top 10 sources of FDI inflows into India,” said Mohit Musaddi, a Research Associate at the Delhi Policy Group.

Investments from UAE and Saudi Arabia 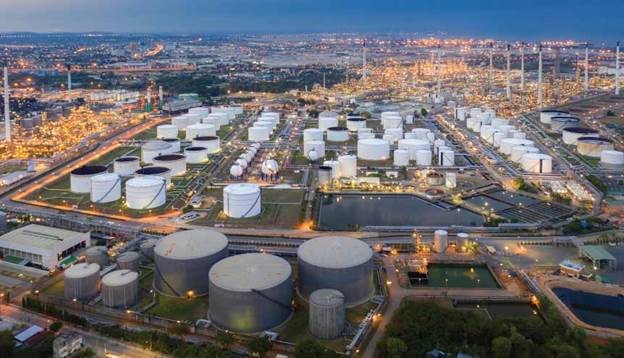 Among the GCC countries, the UAE and Saudi Arabia are the two key trade partners of India with annual bilateral trade of $60 billion and $34 billion, respectively.

While India’s bilateral trade with the UAE has steadily grown over the past years – it now features in the top sources of FDI inflows into India – it is New Delhi’s ramping up of commercial engagements with Riyadh that has dramatically boosted the trade prospects with GCC.

Among the GCC countries, the UAE and Saudi Arabia are the two key trade partners of India with annual bilateral trade of $60 billion and $34 billion, respectively. 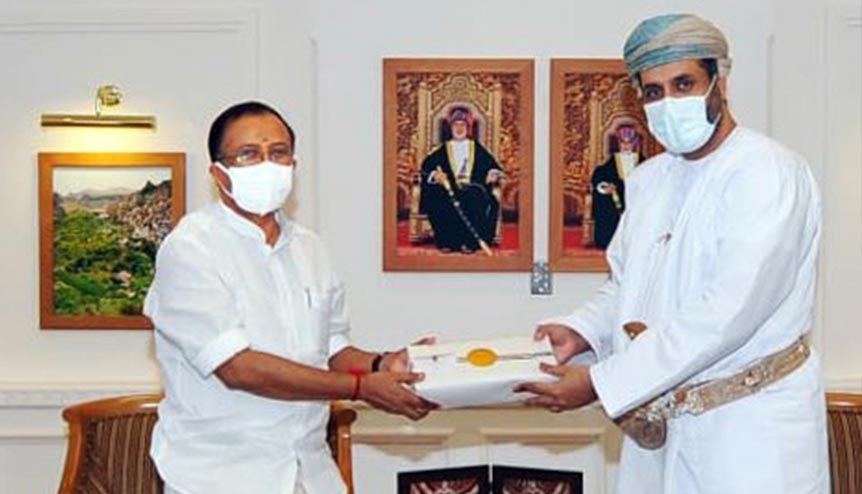 Minister of State for External Affairs V. Muraleedharan presents a memento to Oman’s Labour Min Prof. Mahad Baawain. An Indo-Oman joint venture – Sebacic Oman – has rolled out a $1.2 billion project to set up the largest sebacic acid plant in the Middle East.

A potential investment of $100 billion in the areas of energy, refining, petrochemicals, infrastructure, agriculture, minerals and mining by Riyadh, the $44 billion deal between India, Saudi’s Aramco and Abu Dhabi’s national oil company (ADNOC) to build a mega refinery in Maharashtra’s Ratnagiri and Saudi Aramco’s planned purchase of a 20 percent stake in India’s Reliance Industries stand out in this regard.

In a turbulent competitive oil market, by establishing a long-term stake in India’s energy sector, the UAE and Saudi Arabia have not only secured their spots in a market where they have competed with Iran and Russia, but also brought much-needed stability to global oil prices through trilateral energy cooperation.

#DrSultanAlJaber: This strategic partnership with @ONGC_, and the other members of the consortium, will help #India meet its growing demand for energy and refined products, and create opportunities for @AdnocGroup to increase its market share in a key growth market pic.twitter.com/nyq8MCP019 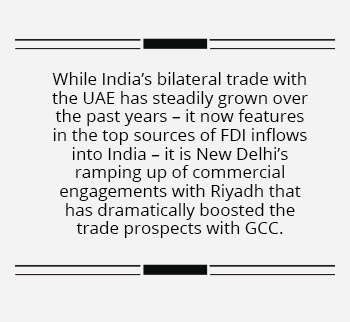 While India’s ONGC Videsh has acquired a 10 per cent stake in an offshore oil concession in Abu Dhabi for $600 million, an Indo-Oman joint venture – Sebacic Oman – has rolled out a $1.2 billion project to set up the largest sebacic acid plant in the Middle East.

“There is also a significant hunger for investment in infrastructure in India which Arab countries can tap into through collaboration with Indian firms for long-term gains. Arab capital and Indian technology have the wherewithal to evolve into a formidable coalition. Investing in India will have long-term positive benefits for the Arab countries as India, with a market of 1.3 billion offers unmatched potential,” said Shubham Gupta of the Foreign Policy Research Centre. 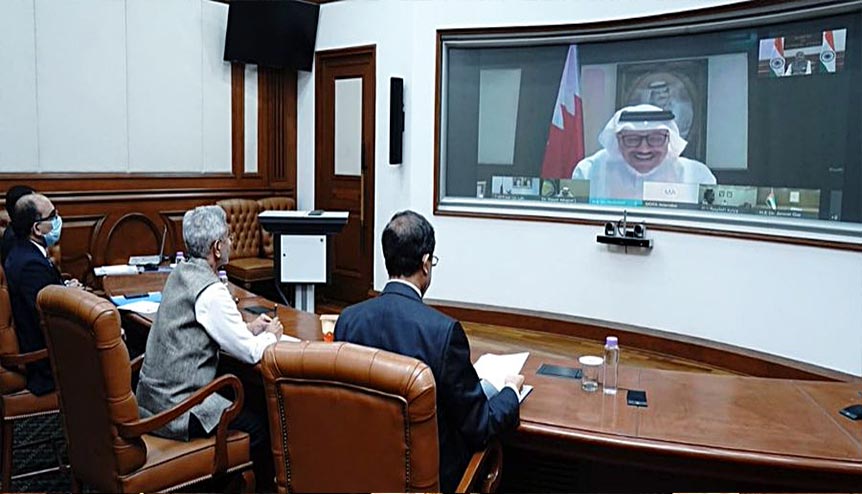 In the latest round of ministerial meeting between the Gulf states and India held last month, Dr Anwar bin Mohammed Gargash, UAE Minister of State for Foreign Affairs and the meeting chair, underscored the historical importance of India for the countries of the region and the need for strengthening them in various ways: economic, investment, tourism, cultural, as well as in education, scientific research and industrial, artificial intelligence, environment, health, and space. ‏He clarified that the UAE and GCC countries are keen on “more coordination and cooperation in various fields and at all levels.” Praising the relentless efforts of Dr S Jaishankar, Indian Minister of External Affairs, to develop relations with the GCC, Dr Gargash also highlighted Indian support for GCC efforts to reduce tension in the region, its positions in support of peaceful solutions, its positive stance towards the Abraham Accords, and its support for peace, coexistence, and stability in the Middle East to open a new chapter in the region.

Preparing the ground for FTA 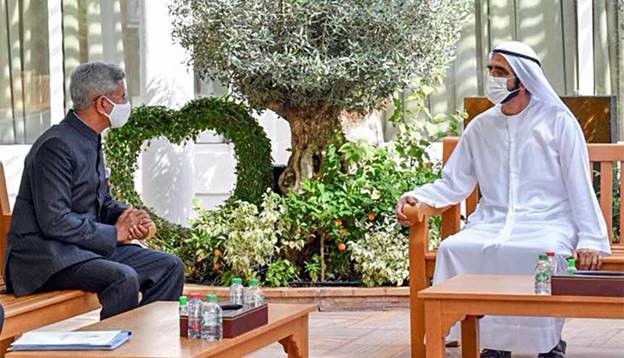 Indian foreign minister Dr. S Jaishankar in discussion with Sheikh Mohammed Bin Rashid Al Maktoum, Vice-President, PM of the UAE and Ruler of Dubai. There is the potential for India and the GCC states to ink an FTA to maximise the $120 billion trade exchange.

While trade exchange between India and the Gulf states has increased from a humble $13 billion in 2001 to approximately $120 billion in 2019, Dr Gargash outlined efforts for strengthening Gulf-Indian cooperation in the economic, commercial, and investment fields with the aim of doubling it with the forthcoming FTA between the two sides. The FTA negotiations – which originally started with the signing of a framework agreement on economic cooperation between the two parties on August 25, 2004 – are understood to be in a productive period of talks between India and the Gulf states, and entails enhanced investment and general economic cooperation along with proposed tariff liberalizations.

With the robust growth and momentum in trade even during the pandemic and the looming prospect of the FTA, the future of India-GCC trade is thus full of immense potential.