The second edition of  100 ‘Most Influential in UK India Relations’

The ‘100 Most Influential in UK-India Relations’ is an exclusive list of key influencers that enrich and help strengthen the UK-India relationship. The list is compiled after painstaking research by India Inc.’s expert editorial team and includes influential people within business, politics, diplomacy, media, arts and culture.

This year, the second edition of 100 Most Influential in UK-India Relations will be released at a special reception, marking the launch of UK-India Week 2018. 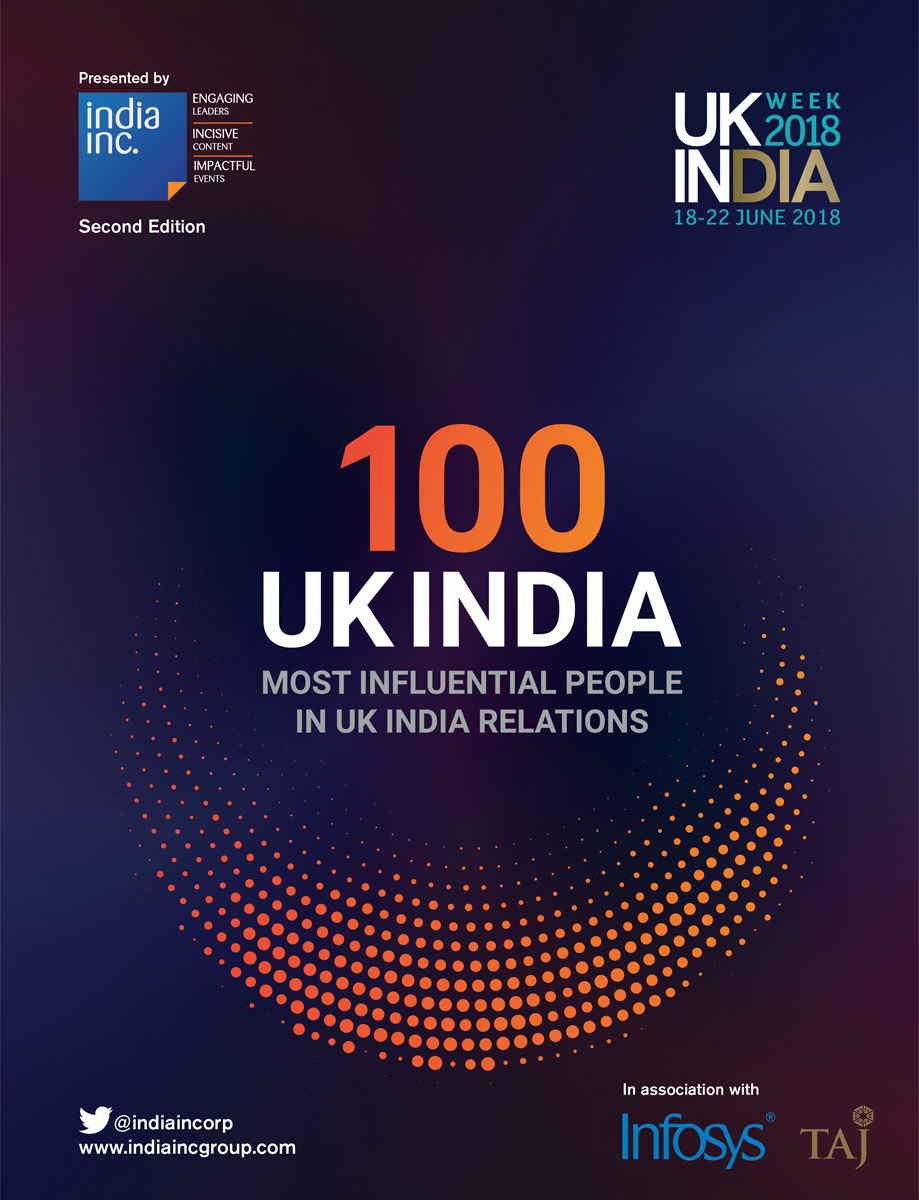 Despite a growing wave of protectionism across the world and local resistance, the largest natural resource producer in India remains bullish on the market. Known for his astute business acumen, the London-based metals and mining tycoon is also a significant contributor to a variety of philanthropic causes in the UK and India. His widespread business interests and deep connect with India continue to make him a force to be reckoned with.

This multi-faceted entrepreneur has spearheaded several companies, including Lulu Exchange Holdings, Twenty14 Holdings and Tablez. He is credited with taking the Lulu Group conglomerate into new areas and growing the Lulu Financial Group into one of the largest worldwide remittance and foreign exchange service providers. With the acquisition of Great Scotland Yard, the former police HQ in London, and the historic Caledonian Hotel in Edinburgh, ably led by Adeeb, the eyes of the hospitality arm of the company are now firmly set on the UK.

Percy heads the New Delhi office of top-tier Indian law firm Cyril Amarchand Mangaldas and is the National Chair of Disputes, Regulatory, Advocacy and Policy. He specialises in legal services to global companies doing business in India. His expertise includes commercial and anti-trust litigation. Percy is known for his nuanced and clear-headed counsel on very complex issues. In recent years, he has developed a strong UK corporate following advising on landmark cases.

The British construction giant’s Mr India is known for his straight-talking and sharp-shooting. He is nothing short of evangelical when it comes to spreading the word about JCB’s amazing ‘Make in India, Export Globally’ growth story. An active member within the trade promotion landscape of the UK and India, Bouverat is also a great asset on the board of the Commonwealth Enterprise and Investment Council (CWEIC).

As the UK head of India’s largest bank, Sanjiv is the most influential Indian banker in London. He sits on the board of the India Infrastructure Finance Corporation UK (IIFC-UK) and chairs the Association of Indian Banks in the UK. Dubbed the elder statesman of Indian banking in Britain, Sanjiv oversaw the bank’s smooth transformation from a branch to a subsidiary in the UK this year, winning him accolades from regulators and fellow banking professionals

He is a seasoned hand in UK-India affairs and a curator of the relationship over the years at Grant Thornton. Anuj is among the drivers of the early listings boom for Indian companies on the London Stock Exchange and has been tracking their growth trajectory as part of the annual ‘Britain Meets India Tracker’ for five years now. Some high-profile transactions he has been involved with include Tata Motors’ acquisition of Jaguar Land Rover (JLR) and re-entry plans for Pizza Express into India.

Ben is responsible for the CBI’s work on trade and investment, managing offices in India, China, and the US. He also represents the CBI on the Group Board of the UK India Business Council (UKIBC). In recent years, the CBI has upped its game on India, and Ben and his colleague in India, Shehla Hasan, should take much of the credit.

Sudhir has steered India’s largest private bank in the UK ably through some tough times. ICICI had launched with a big bang in Britain but shifted into a cautious mode to tide over the financial crisis. However, under Sudhir’s capable leadership, the bank remains fully engaged and keen to play a pivotal role in many UK-India deals.

What are the various events for the UK-India Week 2018?

Can I transfer my invite/ticket to another colleague?

All event invites for the UK-India Week 2018 are non-transferable. Please let us know if any of your guests or you are unable to attend the event.

Is there an age limit to attend the UK-India Week 2018 events?

Kindly note that the all events of the UK-India Week 2018 are only for guests over the age of 16.

Who are the organisers of the UK-India Week 2018?