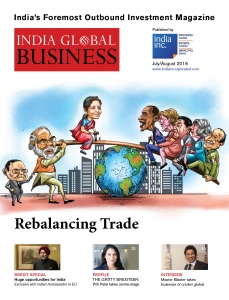 Priti Patel has taken over as Secretary of State for International Development in the Theresa May led post-Brexit British government. A significant promotion within the UK political establishment for this Gujarati-origin Conservative party MP is expected to bring some good news for India.

The fact that Priti Patel became a key voice of the pro-Brexit camp in the lead up to the June 23 referendum in Britain may have seemed like a political risk at one level but it was a very natural choice at a personal level.

Manjeev Singh Puri as the Ambassador of India to the European Union (EU), Belgium and Luxembourg has a unique vantage [...]

Sachin Tendulkar, well known for his big hits on the cricket pitch, has struck a unique off-field investment in an Australian headquartered firm to provide an edge to Indian sports’ brand image. ‘India Global Business’ caught up with him during the launch in London recently to see what the Little Master has in store for cricket this time.

India has resisted pressure on opening up certain areas while the US and Europe are not equally forthcoming, with reciprocity being its mantra on global dealings.

Consider this: An Indian company operating in the US will have to pay additional visa fees of $4,000-4,500 for some H1B and L1 visa applications, according to the Consolidated Appropriations Act 2016 that was signed into law by President Barrack Obama in December last year.

This edition of ‘India Global Business’ throws the spotlight on India’s trade dealings with the world. As the fastest growing economy of the world, it is only right that India seek a rebalance in trade that reflects its growing global clout. Besides this central focus, there are the usual exclusive interviews and columns on offer, including a business focus on Brazil – the host country for the Olympic Games.

In February this year something very uncommon, if not unprecedented, happened in the Indian automotive industry. The country’s largest car maker, Maruti Suzuki India Ltd, exported a batch of 1,800 units of its latest premium compact car Baleno to its home market Japan. Export of cars from India have gained significant volumes and are growing fast but even then this tranche was of special relevance. It was the first time ever that Maruti, where Suzuki owns a majority 54 per cent, was exporting a model from its factories in India to parent Suzuki’s home country. Over the last decade...

A leading Osteopath and Art of Living exponent delves into how yoga can positively impact our day-to-day working lives.

What is the Trump card that woos Indian Americans?

It is one of the many perplexities of modern day politics that a politician who has such extreme views on India and Indians can find favour among the Indian diaspora in the US.

Republican presidential nominee Donald Trump has strong and, often offensive, views on just about anything. From wanting to build a wall to block out Mexicans to denying entry to Muslims into the US, he has gone on record with some of the most outrageous statements from any modern day politician.

Brexit may not be all bad news for India

The frayed nerves have calmed; the markets have stabilised; and investor attention has turned from the fallout of Brexit to the flight path of the Monsoon clouds over India and the fairly good probability of the long awaited GST Bill finally going through the Rajya Sabha and becoming law.

More than a month after the unexpected vote in favour of Brexit, economists, analysts and policy planners are unanimous that that Britain’s shock decision to exit from the European Union (EU) is unlikely to cause any major long-term damage to the Indian economy as it is still very dependent on domestic consumption, which is mostly insulated from global even.

UK and India: Forging partnerships for the future

The India-UK economic relationship is an important one, and would continue to go from strength to strength as the UK exits from the EU, according to the Confederation of Indian Industry (CII).

CII reaffirms its commitment to building trade and investment ties and positively enhancing business linkages with the UK. There is an increasing level of Indian investment into the UK, and many of these Indian businesses are doing extremely well. A recent Grant Thornton/CII ‘India Meets Britain’ report noted that the number of Indian companies growing at over 10 per cent per year in the UK has jumped to 62 from 36 in the previous year. Telecom and technology companies have achieved phenomenal growth, for example HCL Technologies recorded a growth of 728 per cent.

As India takes its place as the fastest growing economy within the global economic order, it is about time the government looked at appointing a dedicated “Indian Trade Representative”, argues India Inc. CEO.

Does India need a dedicated office of a Trade Representative (TR) akin to the United States Trade Representative (USTR)? India has ongoing bilateral and multilateral trade negotiations with the European Union, Thailand, Asean and the Gulf Cooperation Council, among more than a dozen countries and blocs. Then, it has, at last count, at least 45 trade disputes with...

The seaside town of Rio de Janeiro in Brazil will play host to the Olympics in August 2016. As all eyes are currently on this city famed for its carnivals, ‘India Global Business’ prepares a handy guide for those planning to make the most of the business opportunities the city has to offer against the backdrop of this great sporting event.

Post-Brexit Britain: Something will have to give

To say that the UK’s vote to leave the EU has ushered in a period of “uncertainty” would be something of an under-statement.

Even though the UK voted decisively to leave the EU, there is no consensus on what Brexit means in practice. On the one hand, a few politicians, along with much of the press, are celebrating the UK’s new freedom to pursue trade deals with fast-growing emerging economies such as China and India, for now this freedom is...

Ashok Amritraj is famous as one of the Indians who made a mark on international professional tennis back in the 1970s, alongside brother Vijay. The 60-year-old is today best known as a Hollywood producer with over 100 films grossing over $2 billion on the box-office worldwide. The Chennai-born filmmaker is based in Los Angeles but truly embodies the Global Indian tag, making regular trips to India as well as the UK.

‘India Global Business’ caught up with the chairman and CEO of Hyde Park Entertainment during a recent visit to London to delve into the business of cinema, breaking the race divide in Hollywood to pave the way for future generations and China beating India in the box-office race.

Brazil: The B in BRICS has much to offer India

As Brazil puts the finishing touches to its preparations for the Olympic Games at Rio de Janeiro in August 2016, ‘India Global Business’ takes a wider look at what this BRICS partner has on offer for India’s global ambitions.

A free trade agreement between India and the European Union (EU) has already been nine years in the making and the pro-Brexit vote in the UK to exit the economic bloc is unlikely to come as a fillip.

Negotiations for a free trade agreement (FTA) between India and the European Union (EU) have been in the works since 2007. Neither side has been willing to give up on key concerns. For India, these include easier access for its ...

Indian companies are net job creators in the US

Indian companies, far from being job destroyers in the US, are actually net employment generators, writes India Inc. Consulting Editor.

Republican Party presidential nominee Donald Trump’s flip flops over H1B visas, which allow Indian IT pros to work in the US, show that large sections of the US are increasingly viewing protectionism as a panacea for its domestic economic problems, including joblessness, even as saner voices point to the positive contributions made by skilled migrants like Indian geeks.

The Indian Prime Minister sought to set the tone right and put India-Africa relations on a fast track with his recent African safari.

Narendra Modi’s five day four nation visit to Africa in July was his 51st visit to a foreign country since taking over and 11th this year. While his trips to US, Europe or China generate more newsprint and airwaves, his African safari is anything but less significant. The continent has for long being seen as a potential bright spot in the world economy that will manifest itself after emerging markets like Russia, India, Brazil and China have exhausted themselves. When that happens, the country that has the most solid and traditional foundation and footprint...

Global trade slowdown is far worse than projected and the trend is leading to greater protectionism, writes FICCI president.

If you are concerned with slowdown in world trade, think again. It is indeed far worse than what we commonly believe. As the July-report of ‘Global Trade Alert’ pointed out, world trade is not just slowing down – the fact is it has not grown at all since January 2015. Such a prolonged phase of ‘no growth’ in global trade is worrisome and expectedly, it is accompanied by a spurt in protectionism.

As the shine begins to wear off PM Modi’s much-talked-about US visit in June 2016, a foreign policy expert from the Washington DC based Centre for Strategic & International Studies analyses the scenario beyond small but important goals achieved so far.

Brexit or no Brexit: London is open for Indian business

The CEO of London’s economic development agency, London & Partners, flags up the British capital’s many positives in an attempt to convince Indian companies not to be put off by the recent referendum in favour of Britain’s exit from the European Union.

Last year, London’s economic development company, London & Partners, ran a programme to discover those Indian start-up businesses which are most likely to go global. We flew the most exciting companies in adtech, cyber security, artificial intelligence, ecommerce, analytics and other sectors to London to participate in an acceleration bootcamp programme.

Our aim was to strengthen the economic ties between UK and Indian entrepreneurs and investors, and to show them that London was a great place from which to go global.