Vajpayee did not get credit for cementing India’s global position 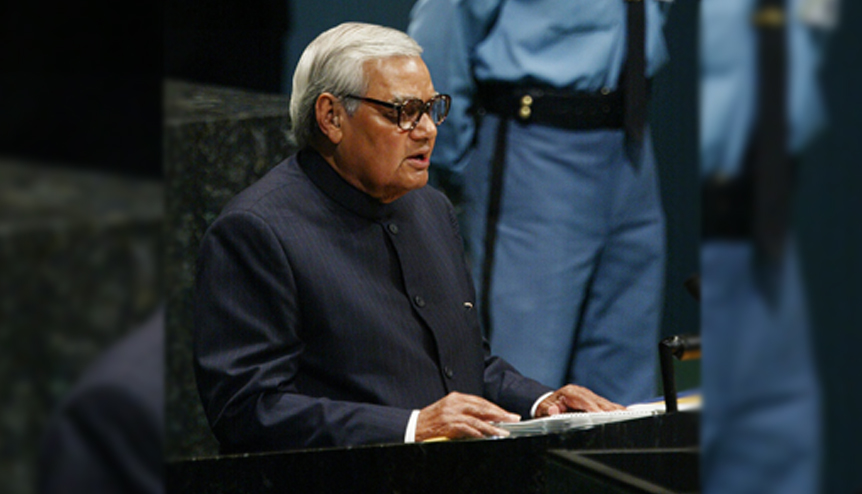 India’s coveted standing on the world stage has its roots in the era of former Prime Minister Atal Bihari Vajpayee.

Former Indian Prime Minister Atal Bihari Vajpayee, who passed away last Thursday, was a poet, politician and a genuine leader of the masses. But ‘India Global Business’ strongly feels he did not get the full credit for his achievements.

Today, India is the toast of the world – both as a golden investment destination and as a much sought after strategic partner. Ironically, this coveted global position has its roots in Vajpayee’s decision to gatecrash into the closed and very exclusive club of declared N-powers, in 1998.

The US, the UK and several European countries imposed stiff sanctions. India was isolated globally but the world had not reckoned with Vajpayee’s acumen at playing a high stakes game of global poker.

He could have gone down the populist path and indulged in anti-US, anti-West rhetoric as many of Vajpayee’s predecessors had done. Instead, his Foreign Minister, Jaswant Singh, held a series of meetings with then US Deputy Secretary of State Strobe Talbot that led to the signing of a document titled ‘A Vision for the 21st Century’ by then President Bill Clinton, who visited India barely two years after he had imposed sanctions.

Former Prime Minister Manmohan Singh is widely credited with signing the 2008 nuclear deal with the US, which formally ended the nuclear apartheid regime that India had been subjected to since 1974. But not enough attention has been focused on the fact that it was Vajpayee who paved the way for this deal.

In his book called ‘Choices’, former UPA-era National Security Advisor Shiv Shankar Menon admits that “Vajpayee single-handedly used his powers of persuasion to make the idea of the United States as an ally acceptable in India.”

It was said before Vajpayee became Prime Minister that Indian leaders were reluctant reformers. Vajpayee was different in that he pursued reforms because he genuinely believed they were good for the country.

In 1999, soon after being sworn in as Prime Minister for the third time, Vajpayee unveiled his plan to build the Golden Quadrilateral, a network of highways connecting the North, East, South and West India, in place of the narrow potholed roads that masqueraded as highways till then.

Alongside this, he also launched the Pradhan Mantri Gram Sadak Yojana (PMGSY) to ensure all-weather connectivity across rural India, which had, till then, been completely neglected by the authorities and planners in Delhi.

Describing his brain child, Vajpayee, the poet-Prime Minister, said: “The highways we are building are the bhagyarekha (lines of destiny) on the palm of the nation. With these highways, we are writing a new destiny for India.”

India had allowed the private sector into mobile and fixed line telephony some years before Vajpayee came to power, but sky high tariffs precluded mass adoption. Telecom companies were on the brink, bogged down by potentially bad loans. Vajpayee, overruling objections of his finance ministry, allowed telecom service providers to migrate from a high license fee regime to a revenue sharing model.

The Opposition, expectedly, raised a stink calling it a scam, but Vajpayee stuck to his guns. The Supreme Court, which scrapped telecom licenses issued by the successor Congress-led UPA-I regime for causing massive losses to the exchequer, upheld the Vajpayee government’s decision. The rest is history. India today has almost a billion subscribers and every mobile phone company in the world, including Apple and Samsung are fighting tooth and nail with a host of Chinese and local companies for a share of this pie.

The way he handled the easing of norms in the telecom sector, the award of contracts for building roads and the manner in which he successfully pushed disinvestment without any hint of a scam, is a pointer to the high governance standards that marked Vajpayee’s premiership.

Unfortunately, Vajpayee did not get his due from the electorate. The seeds sown by him between 1998 and 2004 blossomed into life during the tenure of the successor Manmohan Singh regime, enabling the Congress-led dispensation to claim credit and win a second term in 2009.