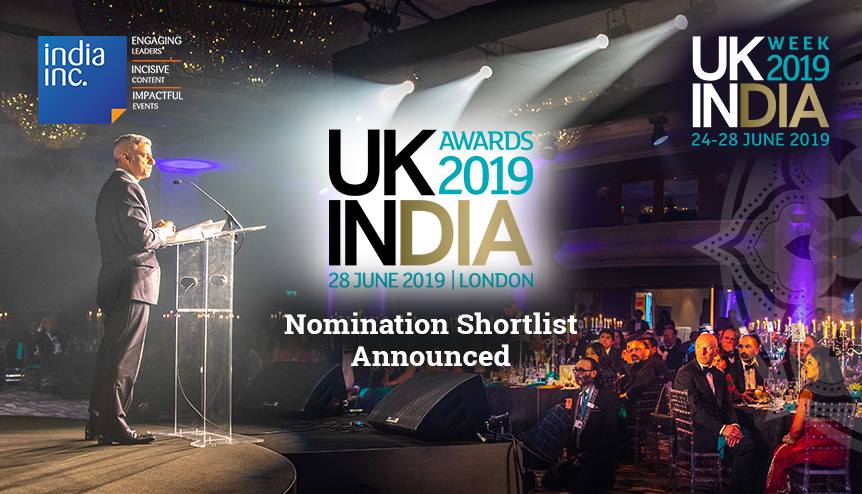 The UK-India Awards shortlist highlights the outstanding examples of UK-India partnership in the realms of business, tech, trade, and social impact.

A key highlight of UK-India Week (24 – 28 June 2019), the UK-India Awards brings together and celebrates the innovative and trailblazing individuals and organisations that are making a significant contribution to the strong global partnership between the UK and India.

The Awards announcement comes at a time when there are 842 Indian companies operating in the UK, with combined revenues of over £48 billion – an increase from £46.4 billion in 2018 [source: Grant Thornton India Meets Britain Tracker 2019]. Last year investment from India increased an incredible 321% over the previous year [source: ONS] and London sits at the very epicentre of this prosperity, attracting more investment projects from India than any other major European city [source: London & Partners]. Sending a clear message, that Brexit or no Brexit, India is committed to building winning partnerships with the UK.

This year’s UK-India Awards will be judged by an all-women panel of leading figures in business, technology, media, and politics:

This year, thirty-five organisations have been shortlisted, including:

A full list of the organisations shortlisted can be found here.

This year, British Asian Trust working with Childline are the Social Impact Partner for the UK-India Awards 2019.

“The UK-India Awards recognise people and organisations who work to build the bridge between the UK and India. They bring a wealth of innovation and creativity to this rich and winning partnership.

“This year’s nominations are no different – they are companies and individuals that recognise the importance of the UK-India relationship and the global role the countries must fulfil. In addition to this, the UK-India Awards will also celebrate the organisations and individuals contributing to the UK-India partnership’s leading, transformational impact on the world as a whole. They are working to bring new opportunities to this rich partnership.”

The winners of the UK-India Awards will be announced at a glittering ceremony in London taking place on 28th June 2019.

In its third year, the Awards ceremony takes place during the inaugural UK-India Week, running 24th-28th June. UK-India Week celebrates the strong partnership between the UK and India and is a catalyst for promoting opportunities for future collaboration.

UK-India Week (24-28 June) celebrates the strong partnership between the UK and India and is a catalyst for promoting opportunities for future collaboration.

UK-India Week sets the pace for the two global nations’ bold, winning partnership, showcasing the potential for collaboration between the two countries.

This year, UK-India Week launches with ‘India Day’, a day of broad discussion and valuable debate tackling issues central to the future of the global partnership. UK-India Week’s cornerstone event is the India Inc. Leaders’ Summit, a two-day exchange of enterprise, innovation and opportunity which convenes international business leaders, change-makers and entrepreneurs to enhance collaboration.

It concludes with the UK-India Awards, a star-studded show celebrating people and organisations who, with their worldwide influence, are creating new frontiers for the UK-India partnership.