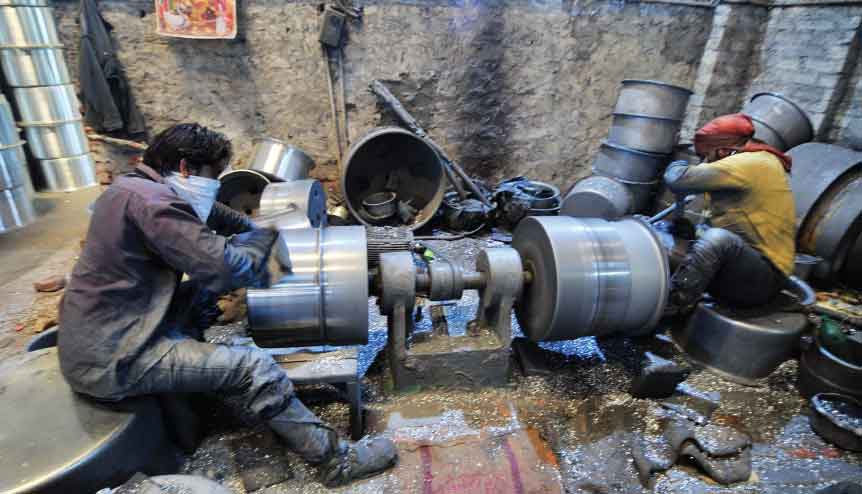 In a largely domestic-focused set of reforms, the Indian Finance Minister announces a new policy for public enterprises, decriminalises violations of the Companies Act, allows companies to list overseas, directly makes life a lot easier for businesses and people working in them.

Indian Finance Minister Nirmala Sitharaman announced eight measures in the fifth and final tranche of measures to make India self-reliant and lift the country out of the Covid-induced economic slowdown. She said the private sector would be allowed to enter all sectors of the economy, violations under the Companies Act will be decriminalised, companies will be allowed to list directly in foreign stock exchanges and Covid-related debt would be exempted from being included from the definition of default. She also announced a four other measures on education, health, the Mahatma Gandhi National Rural Employment Guarantee Scheme and state finances.

The first four measures listed above will considerably improve the ease of doing business in India and help Indian companies bounce back faster.

The Finance Minister announced a new public sector policy under which the PSUs will play a role in some defined sectors, but all sectors will be open for private companies to invest in. This means India is shedding the last vestiges of its socialist hangover and making a 180-degree turn from the Nehruvian policy of giving the public sector the commanding heights of the economy. However, it is not yet clear whether the Indian private sector will be interested in entering sectors like nuclear power generation, which is now reserved for state-owned companies.

Under this policy, the government will retain control of at least one public sector company in certain defined sectors but privatise PSUs in other sectors. Does this mean the government will sell its stakes in public sector banks after completing the planned mergers and amalgamations to create fewer, larger state-owned banks? A plan reading of the announcement would seem to suggest it could but this will depend on a variety of economic and political factors. 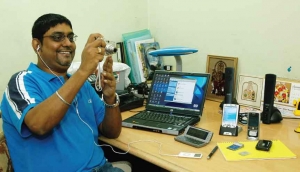 Currently many provisions under the Companies Act carry a criminal liability in case of violations. This places additional and unnecessary compliance burdens on Indian companies, increase their cost of operations and in many cases also deny them access to the talent, expertise and experience of some independent directors.

The government now proposes to decriminalise these violations by dropping seven compoundable offenses under the Act. In the case of five other offences, an alternative framework will be used to deal with them. This will free up the time spent by top management of companies in dealing with these so-called offences. It will also reduce the number of cases being filed in courts and help de-clog the Indian judicial system, which is burdened down by a backlog of millions of pending cases, 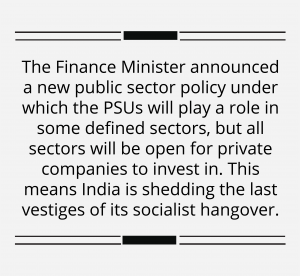 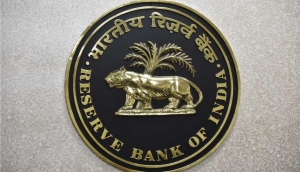 The Reserve Bank of India (RBI) has very strict rules governing the recognition of defaults by Indian banks. Under this, lenders have very limited headroom for discretion on dragging defaulters to the bankruptcy court under the Insolvency and Bankruptcy Code (IBC), which mandates a time-bound resolution of the default or, in case of a failure to reach a resolution, provides for compulsory liquidation of the defaulting company. Many big names of Indian industry have seen the control of their flagship companies and crown jewels wrested from them under this law.

But recognising that the Covid-19 pandemic has brought economic activity to a halt in the country for close to two months, leaving many companies with zero revenues with which to service their liabilities, and also considering that the medical crisis will lead to a temporary and massive contraction in economic activity that will adversely affect several businesses, the government will amend the law to exclude Covid-related debts from the definition of default under the IBC.

In more relief to businesses, no fresh insolvency proceedings will be allowed for one year. This will give businesses a one-year window to recover from Covid-related stress and put their affairs back in order. Further, the threshold for initiating insolvency proceedings has also been raised 100 times, from $1,400 at present to $140,000. This will ensure that businesses cannot be harassed and threatened with liquidation for defaulting on minor sums of money.

The Finance Minister announced four other measures to address the Covid-related crisis. These include increasing the allocation for the Mahatma Gandhi National Rural Employment Guarantee Scheme (MNREGS) to $14 billion an increase of $6 billion from the $8 billion allocated for it earlier. This is to ensure work, incomes and livelihoods for the millions of migrant workers who have returned home to their villages in the wake of the coronavirus outbreak. 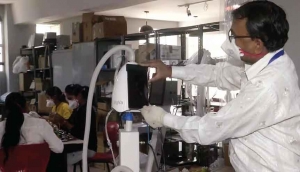 The government will set up infectious disease hospitals in all the 739 districts across India’s 28 states and eight Union Territories to deal with the Covid-19 and other similar crisis in future. The government also plans to set up public health laboratories in all these districts. At present, these facilities are available only in the big urban centres.

Online education gets a boost

The Finance Minister announced that the government will launch a scheme immediately to equip all classrooms at the school and high school level with a TV channel to broadcast special educational programmes, adding that the Top 100 universities can start online programmes by the end of May this year.

The Covid-19 pandemic has hit the revenues of both India’s federal government as well as that of the states. To help the states meet their obligation, the federal government will raise their borrowing limit from 3 per cent to 3.5 per cent, thus, giving them access to about $60 billion of additional resources, subject to them initiating a set of reforms.