Skip to content
Shrewd Modi scores a fine goal, whilst Rahul scores an own goal

Shrewd Modi scores a fine goal, whilst Rahul scores an own goal 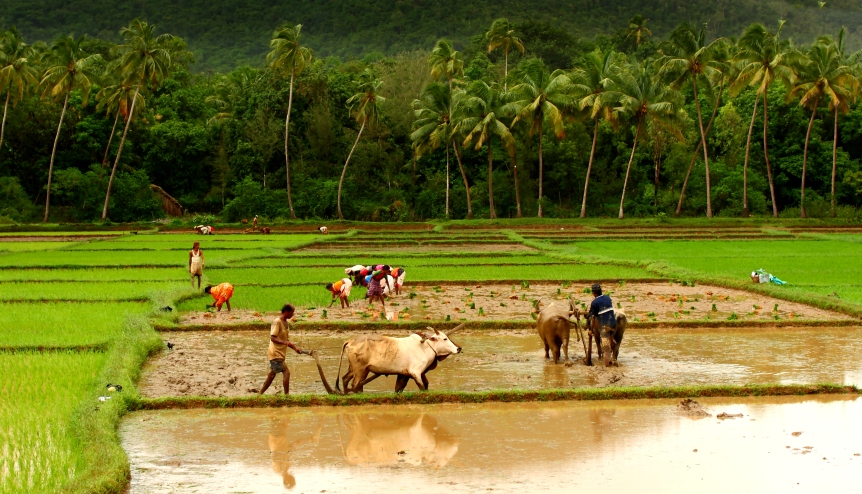 If you hadn’t realised, it’s football crazy season. With giants such as Germany and Argentina crashing out in the early stages, the FIFA World cup has ignited the imagination of many non-committed watchers around the world.  I will be rooting for England all the way – that’s of course in the football, and not in the cricket!

India, though not known for its football prowess, has seen a week where the proverbial political football has been kicked around a fair bit.

Indian Prime Minister Narendra Modi has fired his first salvo across the bows of the Opposition in the run-up to the 2019 General Elections by announcing a steep increase in the Minimum Support Price (MSP) for many staple agricultural products. Much to the delight of India’s all important farming community.

The increase, which varied between 10 per cent and 97 per cent for various crops, is in line with the Bharatiya Janata Party’s (BJP) 2014 election pledge to provide an MSP of 1.5 times the cost of production to farmers. The decision also marks a major milestone in the Modi government’s much-publicised plans to double farm incomes by 2022.

MSP is a mechanism by which the Indian government sets a floor rate for farm products. Farmers unable to sell their produce at this or higher prices to private traders can tender their crops to government agencies, which then buy it at the announced rate. I guess, something similar in sorts to the European Union’s Common Agriculture Policy.

The farming lobby is arguably India’s most powerful special interest group; so, the price increase has major political overtones. Though agriculture accounts for only about 15 per cent of India’s GDP, the sector directly and indirectly employs or provides livelihood to more than 60 per cent the country’s population. They also have a much higher propensity to vote than the BJP’s traditional urban middle-class core voter base, which is getting more and more apathetic to the ongoing cycle of Indian elections.

Over the last couple of years, India has seen sporadic incidents of farmer unrest due to un-remunerative prices of agricultural commodities. There have also been incidents of farmer suicides, which the Opposition parties and sections of the media have played up to allege that the Modi government is more interested in the welfare of industrialists than that of poor farmers.

Most followers of the Indian economy dismiss this allegation as hogwash but farm incomes are an emotive issue in India and no government can afford to ignore the grapevine even if the reality is very different.

At one stroke, the Modi government’s decision to increase MSP has punctured the Opposition balloon though its main rival, the Rahul Gandhi led Congress, still managed to carp about it, predictably calling the hike ‘too little too late’.

Yet at the same time Rahul Gandhi scored an own goal in Karnataka, one of a handful of states his party still controls, where the state government surprisingly increased fuel prices whilst their leader criticised Modi for doing the same at the Centre.

However, leaving the disarray of the Opposition’s policies and messaging to one side, I believe very firmly that Modi’s decision on MSP combines good politics with good economics; I’ll explain why.

The three big state elections due at the end of the year, in Madhya Pradesh, Chhattisgarh and Rajasthan, are being called the semi-final before the big one – the General Elections – in May next year (every state election, it seems, is a semi-final for Modi but not for his rivals… but that’s another story).

Modi’s party, the BJP is in power in all three and, by most accounts, facing some amount of incumbency challenge, particularly from farmers. This decision, therefore, is likely to mollify this important voter segment, which has made and unmade several governments in the past.

Contrary to popular opinion, India’s rural heartland not only holds the key to the agricultural sector, but also plays a major role in shoring up the fortunes of Indian industry and services sectors as well.

Not many people know that rural India, which is usually identified only with farming, accounts for more than 40 per cent of the aggregate demand in India.

India’s rural and semi-rural population generate almost half the country’s demand for two-wheelers, garments and footwear. It is also a major consumer of steel, cement, fast moving consumer goods, consumer durables and telecom services, among many other things.

So, propping up farm incomes not only helps those who feed the country, it also helps generate demand for a host of other products that keep the wheels of India’s recovering economy moving and helps keep GDP growth at a high trajectory.

All this is not to say that there are no areas of concern.

Economists and analysts have warned that the huge expenditure on procuring food grains – some estimates put the cost at about $5 billion, though the final figure will depend on the amount of grains tendered by farmers to the government’s procurement agencies – will mess up the Finance Ministry’s fiscal maths. They have also red-flagged the possibility of this massive injection of money into the rural economy stoking inflation.

Even the Reserve Bank of India (RBI), India’s central bank, has warned against the possible impact of an increase in MSP on inflation.

“If the Monsoon is deficient and the budget proposals on MSPs lead to higher food prices, headline inflation could rise above the baseline by around 80 bps,” it has said in its last Monetary Policy.

This is ominous, especially given RBI’s recent stance on inflation, which has turned more hawkish. Fortunately, though, the weather office has predicted a normal Monsoon this year.

CARE Rating, a leading Indian rating agency, says in a recent report: “The forecast for normal Monsoons this year, the third consecutive year, augurs well for overall agricultural output and thereby food prices. Further, the commodities whose MSPs have been announced have a total weight of less than 4 per cent in the WPI and 7 per cent in CPI. As such, the impact on inflation would be limited.”

My good friend, Dr Rajiv Kumar, Vice-Chairman of NITI Aayog, the government’s official think tank, too does not foresee any spike in inflation as a result of the MSP increase, for precisely the same reason.

Fiscal deficit will not deteriorate

India has amended its fiscal deficit target this year and so, cannot afford to miss it a second year running. The fear is that international rating agencies will have a lot to say if it does and this could prompt many foreign funds to pull out of the country resulting in a further fall in the value of the Rrupee, an increased import bill and a rise in both the fiscal deficit and the current account deficit.

Frankly, these fears are misplaced. After a year of some expected turbulence, the Goods and Services Tax (GST) is stabilising and all indications are that the Indian Exchequer will net an additional $15 billion in indirect taxes. Direct tax collections have also increased as a result of the increasing formalisation of the Indian economy following demonetisation and the introduction of GST.

This will give the Finance Minister a cushion for the increased expenditure on procuring food grains.

In sum, I think it will be fair to say, in football terminology, that the shrewd Indian Prime Minister has artfully dodged the Opposition and scored yet another fine goal.