India-Russia ties have been rooted in history but 2016 marked a shift in gears to give the relationship a solid 21st century dimension.

President Vladimir Putin’s visit to India in October marked a boost for the Make in India programme with the signing of a slew of deals for the co-production of military helicopters. India also signed up to the purchase of Russian missiles and frigates.

Some highlights of the joint statement issued by Prime Minister Narendra Modi and Putin include:

The focal point of the year was the oil and gas sector, with an ONGC Videsh Limited (OVL) led consortium of Indian firms acquiring equity in Russia’s Tass-Yuryakh Neftegazodobycha and Vankorneft, making the $15-billion investment the largest equity oil acquisition by India.

OVL managing director Narendra Verma said: “We have already agreed on purchasing 49.9 per cent in Vankorneft and 29.9 per cent in TAAS-Yuryakh Neftegazodobycha (together with a consortium of Indian companies – TASS). The total volume of investments is $5 billion and we have already invested $4 billion.”

Aalok Shanghvi, head of emerging markets at Sun Pharma, said: “This acquisition is consistent with Sun Pharma’s philosophy to invest in strategic Emerging Markets. This transaction gives us access to local manufacturing capability across multiple dosage forms in Russia, enabling us to serve the Russia pharmaceutical market more effectively.”

The year 2016 was crucial in setting the tone for future ties with the Bear, a reference to Russia, against the backdrop of India edging closer to Russia’s rival US and Moscow taking steps to build relations with India’s neighbourhood rival Pakistan. There was a visible attempt at restoring the geo-political alignments in the region.

As India Inc. analysed earlier this year, President Vladimir Putin has leveraged a growing relationship with China and Pakistan to remind India that Moscow is not without options, as New Delhi itself seeks friends in Washington DC and European capitals. Yet, the fact is this is a short-termist game because the broader sweep of civil society and private-sector business relations between Russia and India no longer exist. Indian business has tended to steer clear of Russia because it is seen as a tough place to invest in.

Yet, the country retains enough capacity and military prowess to be a factor in the immediate future and the New Year is likely to see movement on some crucial issues, including the much-hyped joint pipeline costing close to $25 billion to ferry natural gas from Siberia to India. 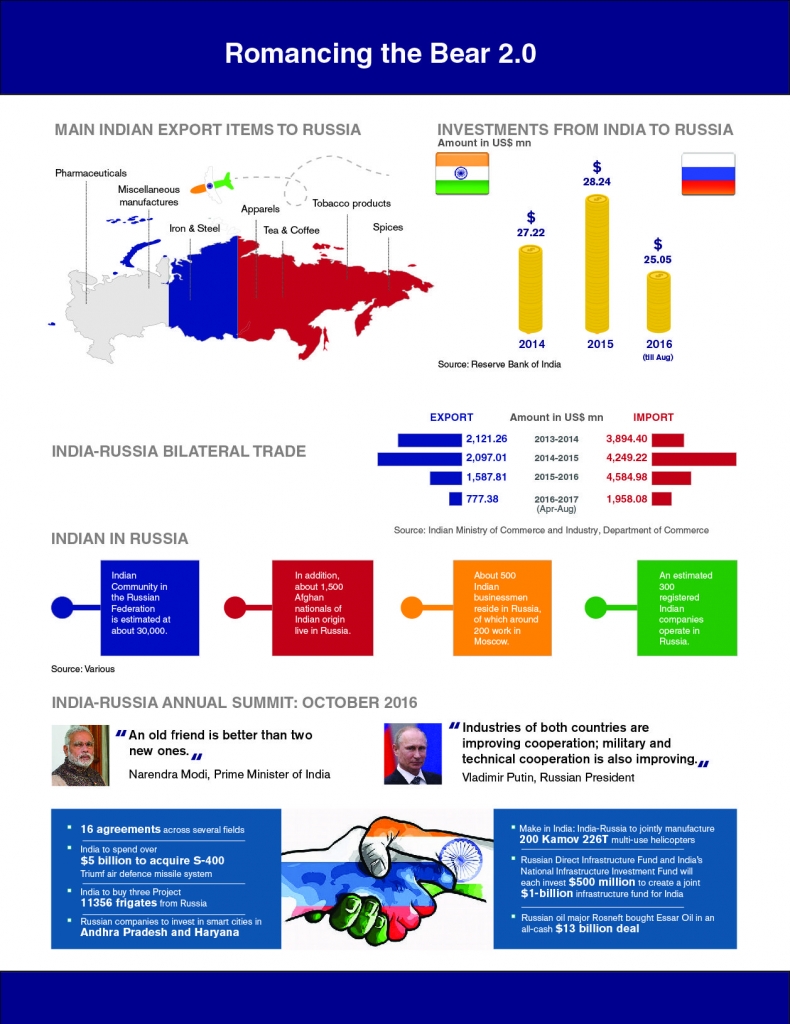