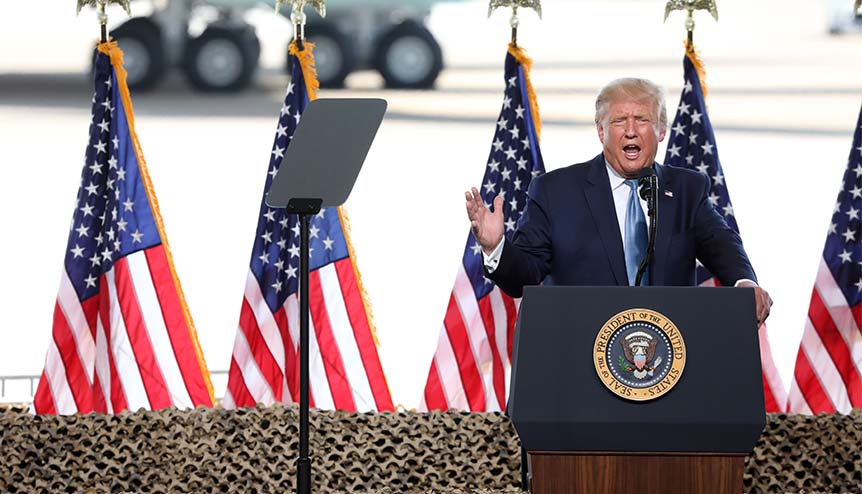 The US President’s transactionalism on trade and hard line on immigration has caused some hiccups in India-US ties but robust cooperation on defence and strategic affairs has turned the two countries into natural allies in the emerging tussle with a rising totalitarian hegemon.

How should India look at the Trump presidency? Foreign policy wonks and economic analysts are divided over this question. There is no doubt that over the last three-and-a-half years, the US has hurt India on trade and hit the country where it hurts by clamping down on H1B visas, which are mainly used by technology companies to send Indian professionals to the US. However, his decision to call out Pakistani duplicity on terrorism and his support for India in its tensions with China are huge positives for New Delhi. This congruence of interests has led to a much closer strategic relationship and an almost total convergence in the sphere of sphere geo-politics, especially in Asia and the Indo-Pacific. Then, the energy partnership between the two countries has also blossomed under Trump and Modi.

It’s true that India and the US are now close strategic allies and the military relationship is closer than ever before; it is also a fact that there is now a much wider chasm dividing the two countries on issues relating to bilateral trade and immigration. But even here, there are shades of grey that make it impossible to paint the relationship in black and white.

The Trump administration recently issued an executive order suspending the H1B visas that IT companies mainly use to send India professionals to the US. Almost every leading technology leader, from Sundar Pichai of Alphabet and Google to Tim Cook of Apple have criticised this move.

Immigration has contributed immensely to America’s economic success, making it a global leader in tech, and also Google the company it is today. Disappointed by today’s proclamation – we’ll continue to stand with immigrants and work to expand opportunity for all.

The US has also cracked down on issuing L-1 visas that many companies now use to send their employees to enter the US on. These are reserved for experienced professionals who are already on the payrolls of firms that propose to begin or expand operations in the US. Indian IT companies and the Indian subsidiaries of US tech giants are the biggest beneficiaries of L-1 visas and account for 23 per cent of all such visas issued.

But, as a senior Indian government pointed out, it will be unfair to blame Trump alone for this imbroglio. All over the world, countries are clamping down on immigration. So, it’s not just the US and Trump that are doing it. The US has been tightening immigration norms since the George W Bush administration. This trend continued through the Obama years and has only hardened under Trump. But he pointed out, Trump’s idea of having a points-based system for new immigrants will help Indian professionals.

So, he pointed out, the pain felt by tech companies in India and the US may not last beyond the mid-term. Of course, a lot will depend on the result of the US presidential election due in November.

The angst over trade and commerce 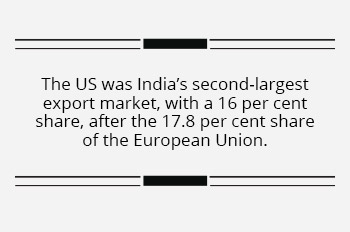 The US was India’s second-largest export market, with a 16 per cent share, after the 17.8 per cent share of the European Union. It was also the third largest source of imports, with a share of 6.3 per cent after China and the EU.

The vexed issue of a trade deal with the US is making very good progress and is likely to be finalised soon. Initially, tariffs on 50-100 products will be cut. This will be followed by a comprehensive Free Trade Agreement, Indian Commerce Minister Piyush Goyal said recently. 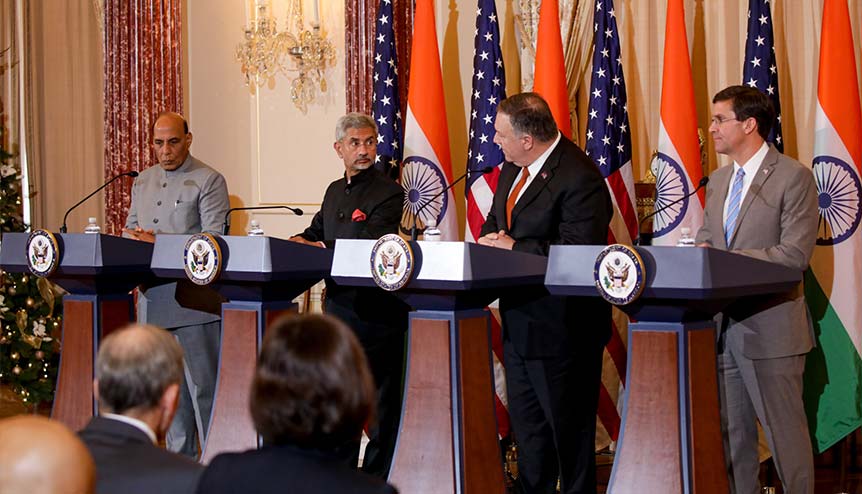 US Secretary of State Mike Pompeo (2nd L), US Secretary of Defense, Mark Esper (R), Indian Defense Minister Rajnath Singh (L) and Indian Foreign Minister Subrahmanyam Jaishankar (2nd L) at a joint press conference at the State Department in Washington, DC, United States in 2019. The US and India are actively working to resolve issues on trade.

The talks have dragged on for more than a year as the two sides failed to come to any agreement on providing market access for agricultural products, including dairy products, medical devices, and information and communications technology (ICT) products and easier immigration norms for professionals.

The discord over trade has not yet begun to threaten the robust bilateral strategic relationship but unless it is settled quickly and US actions lead to job losses and economic hardships in India, it could come in the way of fulfilling the potential of what many have described as the “defining partnership of the 21st century”.

However, nothing significant beyond the limited trade deal referred to above is likely before the US presidential election in November.

Trump takes aim at India; how should India respond?

The areas of convergence

The convergence of strategic interests, most notably on global terrorism, the rise of China and the importance of maintaining peace and stability in the Indo-Pacific Region is what keeps the India-US relationship relevant and important for both countries.

The leaders of both countries have worked hard over the last couple of decades to overcome the baggage of the previous decades when India and the US invariably found each other in opposite corners on almost every issue of mutual interest.

Trump first US President to call out Pakistan on terrorism 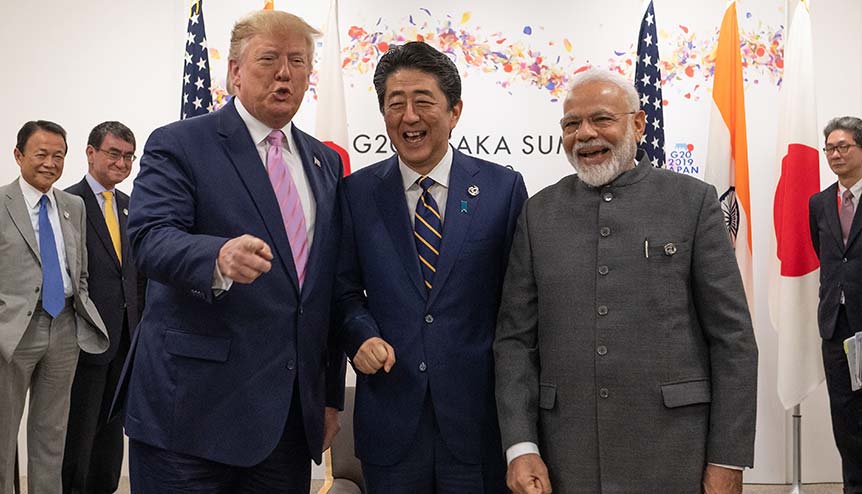 The convergence of strategic interests on global terrorism, the rise of China and the importance of maintaining peace and stability in the Indo-Pacific Region underline the US-India ties.

The US has for decades paid lip service to India’s terror concerns and winked at Pakistan’s complicity in using terrorism as an instrument of state policy against India. It did so because it needed Pakistan’s cooperation to pursue its war on terror in Afghanistan.

Trump was the first US President to call out Pakistan and punish it for nurturing terrorists by clamping down on military aid and cutting other assistance. Then, his administration pursued sanctions against 26/11 mastermind Hafeez Sayeed in the UN, in the face of stiff resistance from China, and finally succeeded in putting him on the sanctions list last year.

Then, the US administration has largely supported Indian actions in Jammu & Kashmir, including the abrogation of Article 370, which gave the state special status. This, too, has helped curb Pakistan-backed terrorism and helped bring a semblance of normalcy to the troubled state.

Geostrategic convergence in the Indo-Pacific 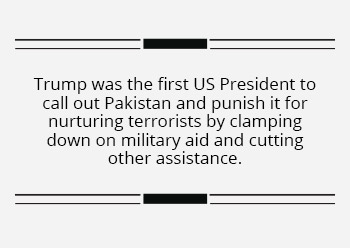 The US provided India will real time intelligence inputs on Chinese troop movements during the recent military clashes between the two Asian giants in Ladakh. This was an extension of their military, diplomatic and strategic cooperation in the Indo-Pacific.

It must be noted that it was under Trump that the US renamed what was earlier known as the Asia-Pacific Region as the Indo-Pacific underlining the centrality of India in its new strategic paradigm. India, the US, Japan and Australia are the four corners of the Quad, the emerging regional security alliance that wants to maintain an open and free Indo-Pacific region in which free trade and freedom of navigation is guaranteed. 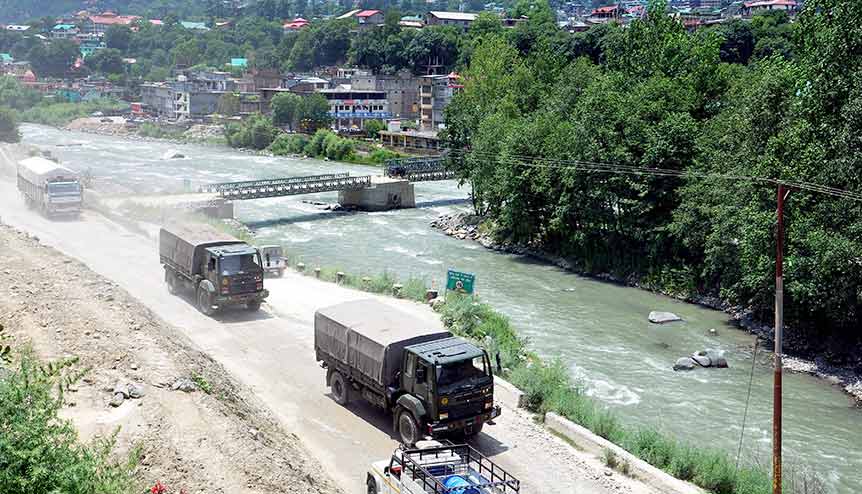 The US provided India will real time intelligence on the movement of Chinese troops during the recent military clash in Ladakh.

Besides, the US, under Trump, has removed most restrictions on the sale of weapons to India. As a result, it has supplied India with sophisticated Apache and Chinook helicopters, Poseidon P-8i anti-submarine and maritime surveillance aircraft and other defence platforms. The two countries have also signed several foundational agreements to enhance inter-operability among its defence forces.

Thus, there is now near total congruence of strategic goals between India and the US.

To quote Charles Dickens out of context, it will be fair to say it is the best of times for India and the US in the foreign policy, defence and strategic sphere but the worst of times in areas such as immigration and trade.