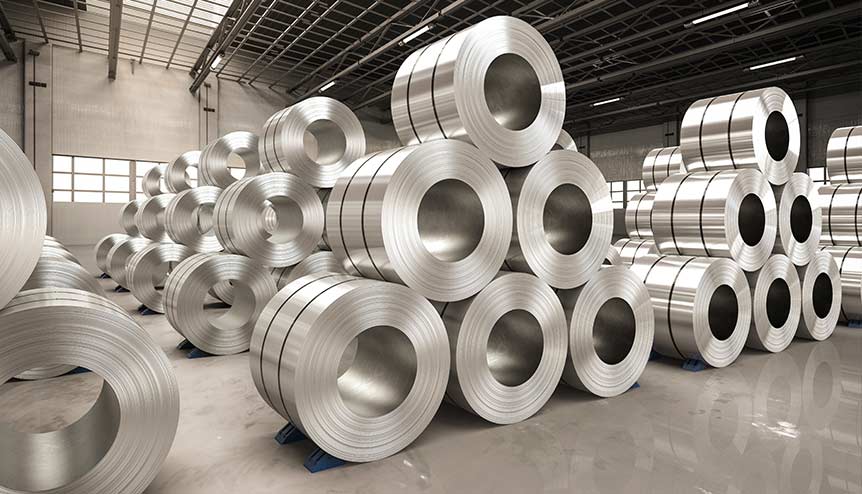 Leading Indian steel companies have raised prices for the second time in November on the back of recoveries in several key consuming sectors. This is giving rise to optimism that the country is on the cusp of a quick and broad-based growth revival. 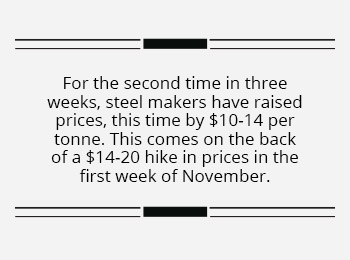 Talking about economic recovery these days is like going back to school to learn the alphabet – one comes across almost every letter. But the first concrete signs that the recovery in India will be V-shaped are emerging.

Several industries are cited by experts as proxies for the economy – commercial vehicles, electricity, fuels, cement and capital goods, among others. But the sector that has, perhaps, the most upstream and downstream linkages with almost every other is the steel industry.

The data never lies as the economy turns the corner 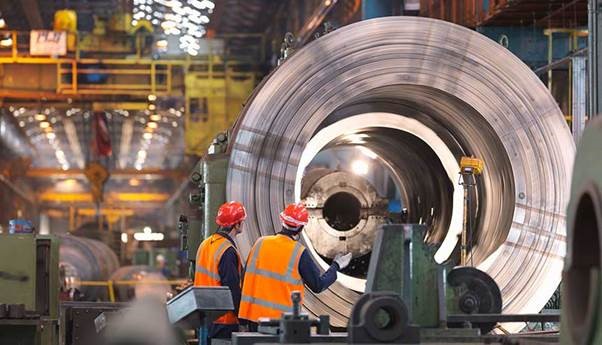 All the major Indian steelmakers have raised prices twice this month on the back of rising demand from the auto and real estate sectors.

Good news emanating from the steel sector is giving rise to optimism that the Indian economy may have left the worst behind it. For the second time in three weeks, Indian steel companies have raised prices, this time by $10-14 per tonne. This comes on the back of a $14-20 hike in prices in the first week of November.

All the major Indian steelmakers, such as Tata Steel, JSE Steel, SAIL, JSPL and ArcelorMittal Nippon Steel have either already raise prices twice this month or are seriously considering the option, mainly on the back of rising demand from the auto and real estate sectors.

Analysts expect the uptick in demand in these two sectors as well as white goods will help sustain steel demand over the medium term at least.

Uptick in demand for housing 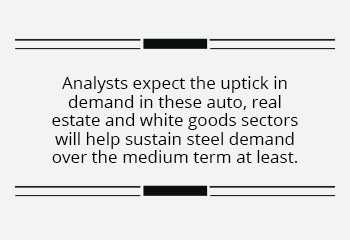 The corroborating evidence from these industries also points to a sustained recovery in demand. For example, there has been a spurt in new home sales over the last couple of months. “New home sales have seen a surprise surge in the last couple of months, making the pandemic-led disruption look like a mere blip. Indeed, units sold in Mumbai and the rest of Maharashtra are 1.1-1.3 times higher compared with January this year,” says a report by Crisil India, the domestic arm of global ratings agency Standard & Poor’s (S&P’s).

“We are feeling cautiously optimistic about the residential market, driven by sales volumes in Mumbai and Delhi. A combination of favourable factors such as low mortgage rates, attractive prices combined with developers’ lucrative payment plans together reinforce the longer-term potential of the sector…,” the CEO of JLL India, a leading property consultancy firm, was quoted as telling the media. 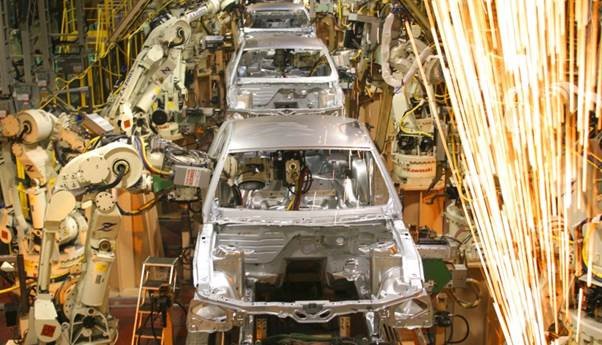 Maruti Suzuki, India’s largest passenger vehicle maker, has raised its output estimate for the November-March period, with a 2-11 per cent higher guidance than its projections in August.

The automobile sector is also seeing a similar rebound. Maruti Suzuki, India’s largest passenger vehicle maker, has raised its output estimate for the November-March period, with a 2-11 per cent higher guidance than its projections in August. 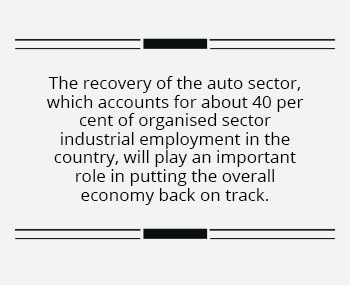 “Some meaningful positive medium-term catalysts emerged this year, with momentum building behind the ‘Make in India’ campaign with a total of $30bn of production-linked incentives for certain industries, autos in particular, announced earlier this week." – Goldman Sachs pic.twitter.com/UAz5YOHmV0

Green shoots are visible across the board

These and other green shoots emerging from other sectors of the economy have prompted Goldman Sachs, one of the world’s leading investment banks, to forecast a full-blown recovery next year.

Other indicators such as the IHS Markit Purchasing Manager’s Index and the Nomura Business Resumption Index, show more green shoots, giving rise to optimism that an uptick in growth rates in the second, third and fourth quarters of the year will significantly temper the impact of the massive de-growth witnessed in the first quarter and ensure that 2020-21 is not a complete washout. 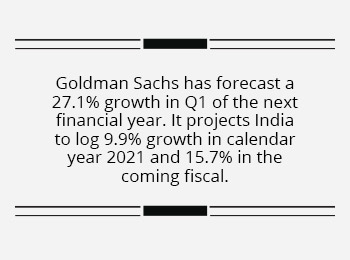 In fact, Goldman Sachs has projected a growth of a massive 27.1 per cent in the first quarter of the next financial year due to a favourable base effect and the full reopening of the economy.

The I-bank has also estimated that India will log a growth rate of 9.9 per cent in calendar year 2021 and 15.7 per cent in the coming fiscal as economic activity across all sectors returns to normal.