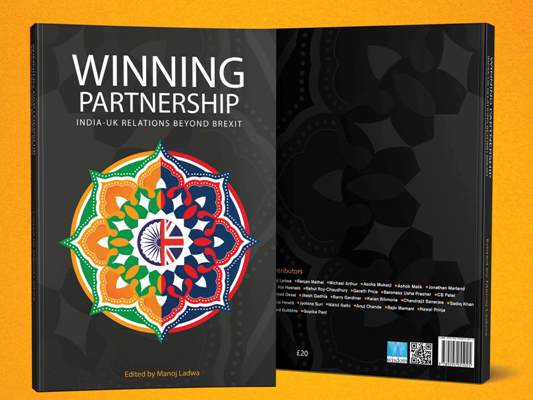 ‘Winning Partnership’ edited by Manoj Ladwa, takes a fresh 360 degree look at a 400-year-old relationship and comes up with several interesting suggestions for keeping it relevant in the 21st century.

What can you say after everything has already been said? Not much, right? Wrong.

With so much literature on UK’s relationship with the former jewel in its crown, it takes a very intrepid intellectual to gather all his bravery to attempt to shed new light on the subject. But Manoj Ladwa and his team of heavyweight contributors – like, diplomats Sir Michael Arthur and Ranjan Mathai, strategic experts Lt Gen Syed Ata Hasnain and Rahul Roy Chaudhary, political commentator Ashok Malik, London’s Mayor Sadiq Khan, Commonwealth Enterprise and Investment Council Chairman Lord Jonathan Marland, India expert Dr Gareth Price, several members of the UK political establishment and top business experts, among other equally notable names – wade into the topic with a gusto and a freshness that make for a very stimulating read.

The book is structured into easily comprehensible and logical sections such as Foundations for the Future, Enhancing Strategic Collaboration, Unleashing the Great India-UK Partnership and Business Voices that allows the flexibility to navigate forward or backward depending on one’s areas of interest.

Everyone agrees that the time is ripe for India and the UK to re-imagine their relationship and rewrite the rules of bilateral engagement. Ladwa’s team of statesmen, politicians, diplomats, businessmen, political commentators and strategic experts offer their vision for the future and, in some cases, tentative steps to get there.

This book is being published in a year when the UK and India are celebrating the cultural cross-pollination that mark each of their societies with a Year of Culture to highlight the vibrant cultural histories and the bonding between two great civilisations on the 70th anniversary of Indian Independence.

As several eminent writers point out in ‘Winning Partnership’, both countries have come a long way since their destinies parted on August 15, 1947. Over the last seven decades, India has gone from being the basket case of the world to its fastest growing major economy and the hottest investment destination.

The relative balance of power between the former colonial master and the erstwhile jewel in its crown has also changed. As in 1612 AD, when Sir Thomas Roe, Ambassador of Queen Elizabeth I, presented his credentials to Emperor Jehangir and sought his blessings to establish trade relations with what was then the richest empire in the world, the UK is again looking for a win-win trade deal with India to deal with the expected Brexit shock.

At this point, the British government needs to demonstrate, in no uncertain terms, that it can find alternative markets and tie up trade deals that compensate for the losses that will accrue from its divorce with the European Union.

This, most observers believe, is the minimum condition Theresa May has to fulfil to get a fair trade deal from Brussels. And that is why, to quote Ladwa from the book, “this may be a good time for UK and India to announce that they are BFF (best friends forever, to use the lingo of today’s youth).”

Sure, India needs the UK for defence technology and access to global finance as much as the latter needs India’s market for its goods and services. But in a stunning reversal of fortunes, New Delhi is in the happy position of being wooed not only by London but also by May’s rivals in Brussels, as well as individual EU members such as Germany and France. The UK, on the other hand, is looking for friends.

It doesn’t need a genius to figure out who holds the aces.

That’s what most of the authors also say.

But this book is a lot more than a commentary on the balance of power between the UK and India. It looks at varied facets of the storied, sometimes bitter-sweet but always highly celebrated relationship such as the need to now join forces for the greatest common good of the world, the necessity of reimagining the place, relevance and future of once useful but nearing their sell-by-date global bodies such as the United Nations and the Commonwealth and the imperative of a shared security vision.

It also explores the possibility of cooperation between the UK and India on deepening as well as revamping the developmental paradigm across countries that need such assistance the most and delves deep into the structures of the soft power each country exercises and raises flags on the lack of cooperation, despite ample opportunities, between Indian government organisations such as Indian Centre for Cultural Relations (ICCR) that have only recently entered the arena of proactively using India’s soft power as the thin end of the country’s diplomatic wedge and the British Council and DfID that have been in the game for decades.

Ladwa suggests very boldly that India can assist other emerging and developing countries by helping them roll out schemes like the Jan Dhan Yojana, the financial inclusion programme initiated by the Narendra Modi government to provide every Indian family with a bank account, which receives all government subsidies, doles and scholarships due to family members. This has reduced corruption and improved lives across the length and breadth of India.
The Unique Identification Number called Aadhaar and the digitisation of the economy are helping reduce corruption, leakages and wastage further, enabling the government to better target benefits at those who need them most.

“This initiative, in my opinion, could, in time, become India’s most influential export since the internationalisation of the zero and help reform the power dynamics and political economies not only in Asia, Africa and South America but also in the developed nations of Europe and North America,” Ladwa says in his introduction.

The contribution and the still untapped potential of the Indian diaspora in the UK is a theme that resonates through several chapters of the book. Dubbed a “living bridge” by Prime Minister Narendra Modi, this small group of expatriates is at last getting the credit that has been due to them for decades.

Ladwa, who hails from a family of such immigrants, adds a personal touch to this otherwise scholarly work by recounting some personal anecdotes from his own fascinating life as a British Indian, born and brought up in inner city Birmingham, engaging in a successful legal and business career, to becoming a widely respected communications strategist and one of Prime Minister Modi’s most trusted sounding boards.

Despite the huge synergies, the contributors are also mindful of the areas of divergence that mark the relationship. In recent times, restrictions on visas for Indian professionals and students have caused angst in the corridors of power in New Delhi. Likewise, the Indian government’s apparent reluctance to ease barriers for exports of goods like Scotch whisky, luxury cars and some value added services such as opening up the legal services and retail sectors to FDI have caused heartburn in Westminster.

Amidst this, there is a perception that the bilateral relationship is drifting, with neither side able to firmly push it in the direction of a closer clinch.

Ladwa and his team of commentators suggest that this drift can be arrested and the perception in New Delhi that “Britain is interested only in Indian trade but not in its people” nipped in the bud only if both sides step in quickly to stem the rot.

And this can be done only by being sensitive to each other’s perspective – India must look at the anti-immigrant sentiment that drove the Brexit vote with empathy and the UK must be more receptive of India’s need to expand its services sector.

Trade, trade and more trade! The authors emphasise that commerce has to be the bedrock of the new, emerging UK-India friendship. It makes eminent sense. India has recently overtaken the UK as the world’s sixth largest economy but the book very rightly points out that India still has miles to go before it can get anywhere close to the levels of welfare the latter provides its people.

And this, the large list of business-contributors point out by drawing on their own impressive experiences, could be the driving force of the relationship going forward.

‘Winning Partnership’ contains several very interesting and mostly doable suggestions to take the UK-India relationship to the next level. So, it will be of interest to politicians and practising diplomats as well as to business people, academics and lay readers.

Arnab Mitra is a senior executive in a large European energy company.