Skip to content
Making Donald Trump a friend of India 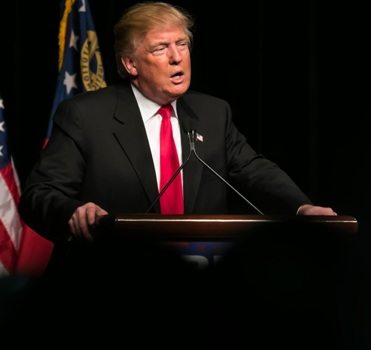 India will do well to take the initiative in correcting the anomalous situation of Indo-US B2B relations and take some immediate steps to project itself as a willing and receptive partner for a Trump presidency, writes a foreign policy expert.

Donald Trump, the first billionaire, to have been elected POTUS, defied all pollsters’ forecasts and cleavages in the Republican party by striking a chord with US voters anxious about their future in a rapidly changing world.

He is now defying all predictions about the nature of his administration by making pronouncements that are diametrically opposed to his campaign rhetoric and by picking a team that is as ‘Republican’ as it can get. It is full of people for whom US foreign and domestic economic policy must cater to advance the global interests of US Inc. It is rather evident that President Trump, like his several Republican predecessors, will keep the US business interests foremost in his domestic policy and in designing US relations with other countries. Perhaps more than ever before, US Inc’s business and commercial interests will exercise overarching influence in the design and execution of US foreign policy.

Here in lies the big opportunity for India. It should move with alacrity to improve the business to business (B2B) relations, which have for some time lagged behind the P2P (people to people) and indeed even G2G (government to government) relations. Both P2P and G2G relations received a big boost during the administrations of President Bush and Obama. However, B2B relations have not kept pace and the full potential of Indo-US economic partnership has certainly not been realized.

The government of India (GOI), under Primer Minister Modi, having accepted that improved Indo-US economic relations will yield relatively larger benefits to India has already moved towards re-setting Indo-US economic ties over the last two years. This has happened largely in upscaling bilateral strategic relations and in directing large public sector procurement orders, both in defense and railways, on US companies. The Obama administration responded positively to these initiatives by liberalising Indian access to dual use technology and diluting the compliance requirements for US exporters of strategic equipment and dual use technology for exports to India.

Despite this upgrading of strategic relationship between the two countries, economic and commercial ties have virtually stagnated with Indo-US bilateral trade in goods and services amounting to only $109 billion in 2015 or about 15 per cent of India’s total trade flows. This is clearly far below the potential as formally admitted in the official communique issued after the conclusion of the IXth Trade Policy Forum (TPF) meeting on 16 October in New Delhi. FDI flows from the US to India have also remained somewhat tepid and well below their potential.

India will do well to take the initiative in correcting the anomalous situation of Indo-US B2B relations lagging markedly behind bilateral P2P and G2G relations. India could take four immediate steps to project itself as a willing and receptive partner to the Trump president . First, India could offer to conclude the Indo-US bilateral investment treaty that has been hanging for nearly a decade. Areas of divergence are not significant and India will benefit enormously by affording the comfort to US investors of the knowledge that their investments are secured by a globally acceptable guarantees and disputes if any will be arbitrated in accordance with international best practices. Second, India has already significantly liberalised conditions for FDI in its financial sector including banking, insurance and mutual funds. Apparently, these liberalisation measures have not yet attracted larger FDI inflows from US firms in this sector. It will be useful to set up a joint task force to expeditiously address some of the niggling issues that could be constraining US FDI inflows into banking, insurance and other financial companies.

Third, the last major outstanding issue is of ensuring adequate IP protection within India by the required strengthening of IP enforcement that is under consideration of the High Level Working Group on Intellectual Property. From all accounts, GOI is committed to rooting the malady of spurious products from the domestic market, and of gross IP infringements in Indian jurisdiction. The Working Group could be tasked with presenting its mutually agreed recommendations within a time bound period. Fourth and finally, India could consider a further dilution of its local procurement requirements for foreign retailers except in the case of agro-products in which it could be retained at 30 per cent to protect farmers’ interests. Additionally, both sides will benefit from a further liberalisation of service sectors such as legal services, accountancy and information technology.

By taking these four specific measures, India will unequivocally and strongly communicate its positive intent for lifting Indo-US economic and commercial relations to a higher level. This will hopefully convince the Trump administration, likely to pursue the US national interests, ostensibly more vigorously, than its predecessors, that India is ready to actively engage in ensuring that bilateral economic ties are win-win proposition. With these three measures, which will hopefully be reciprocated by the new administration in due course, existing bilateral institutional platforms like the Indo-US CEOs Forum and the TPF can be infused with new dynamism.

It is often remarked in India that Indo-US B2B relations will improve once the two sides, particularly the US, agree to lift the overall bilateral relationship from the ‘transactional’ to the ‘strategic’ level. However, it is now important to recognize that an improvement in B2B relations is perhaps the sine qua non for transforming bilateral Indo-US relations from their transactional to a substantive strategic partnership. The causality is quite clearly in both directions. Therefore, India will do well to demonstrate its willingness to address some long standing issues raised by US business and tactically not insist on an instant quid-pro-quo. Such an insistence on quid pro quo and India’s desire to be recognised as a special case, has constrained Indo-US economic and commercial interaction in the past. Incoming Trump presidency, with its overt and strong business bias, could well be the time to turn a new leaf.

Any attempt to bring about a qualitative change in a bilateral relationship, requires one side to take the initiative and show flexibility. The upside for India in taking the first step for qualitatively improving Indo-US B2B relations, are expected to be significantly greater than any possible downsides. Prime Minister Modi will do well to so direct his Cabinet colleagues and officials and ensure that Indo-US relations are given a head start in anticipation of the Trump presidency.

About the Author: Rajiv Kumar