Skip to content
Indian companies scour the world for resources 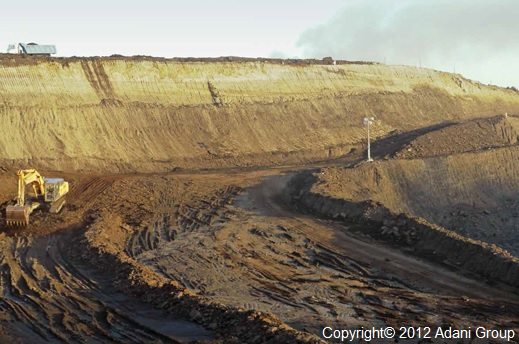 Resource-poor but demand-rich Indian companies are prospecting and mining natural resources such as coal, oil & gas and other minerals at locations as far apart as Indonesia, Africa, Australia and the US to feed their factories back home.

Here’s a trivia question: Which Indian company has a presence, in one form or another, in Audi, BMW, Porsche, Mercedes Benz, Ford, Ferrari, Jaguar and Hyundai cars?

Don’t let the presence of Jaguar on that list fool you. The answer is not Tata. It is that other name that is often taken in the same breath as the Tatas in India – Birla… or, to be more precise, the Aditya Birla group-owned aluminium company Novelis.

Billionaire Chairman of the AV Birla Group, Kumar Mangalam Birla, acquired this company, which was spun off from Alcan, and sold in 2006 for almost $6 billion. It was then awash in red ink and bleeding money every quarter. It took billions of dollars of Birla’s money and the now globally acknowledged frugal management skills of his Indian managers to nurse this company back to health.

The Aditya Birla Group, the Tatas, Reliance Industries, the Adanis, the Essar Group, the Jindals, ONGC and several other Indian companies have invested billions of dollars in acquiring companies in the metals, minerals and mining sector over the last decade.

And despite the recent slowdown in the investment cycle, India Inc’s hunger for cheap raw materials, especially minerals and metals, is fuelling a growing demand for mineral and mining assets in locations as far apart as Indonesia, Africa, Australia and even the US.

That is because India either lacks sufficient reserves of the minerals required to feed their operations or because of the problems associated with acquiring virgin or running mines.

“Developing mining assets in India is facing many roadblocks,” a senior research analyst at Mumbai-based Angel Broking told reporters recently. “Companies such as Adani Enterprises, GVK Power and Sesa Goa have ventured outside to beat resistance to land acquisition and delayed government approvals in India.” 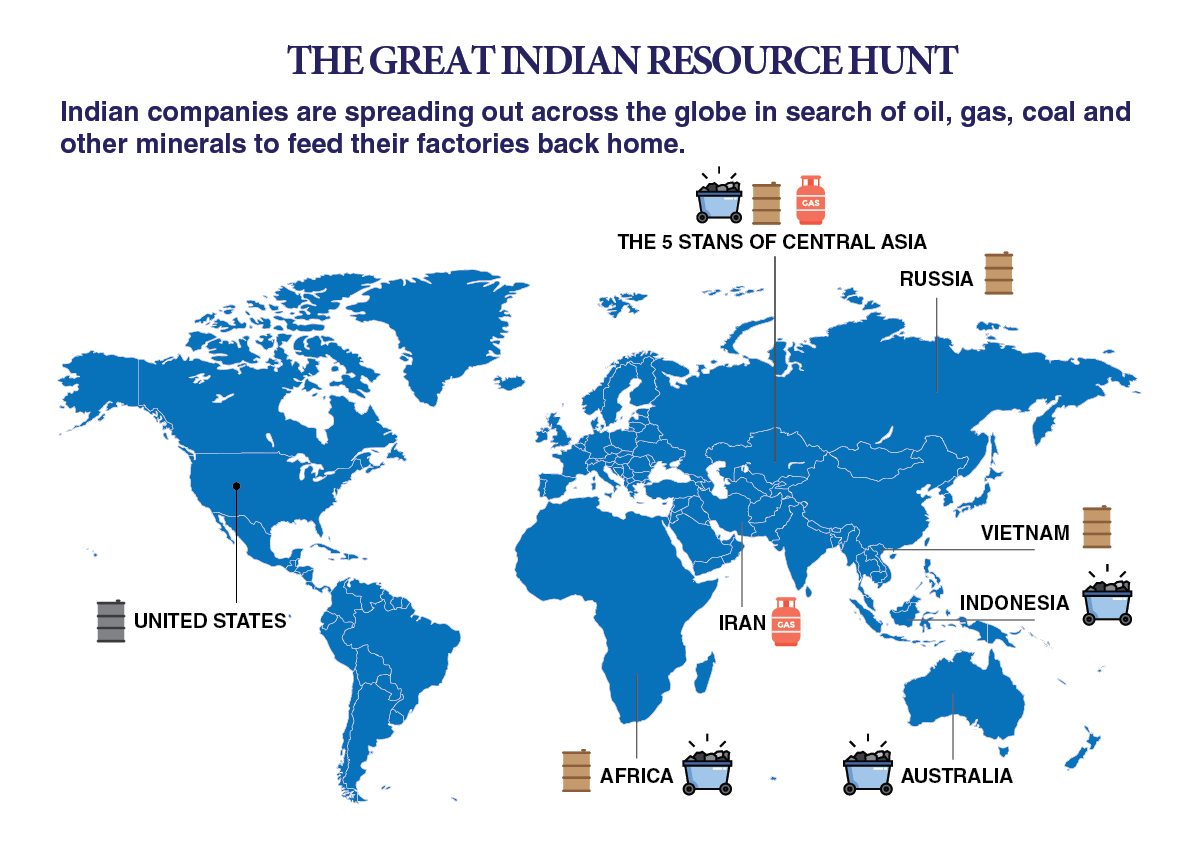 The most reported foreign acquisition of resources was, arguably, ONGC Videsh’s $1.3-billion purchase of a 15 per cent stake in Vankor, Russia’s second-biggest oilfield, from Rosneft, Russia’s national oil company, which holds the remaining 85 per cent.

The field, which is expected to give ONGC Videsh Ltd.(OVL), the overseas investment arm of ONGC, about 3.3 million tonnes of oil per annum, has recoverable reserves of 2.5 billion barrels. 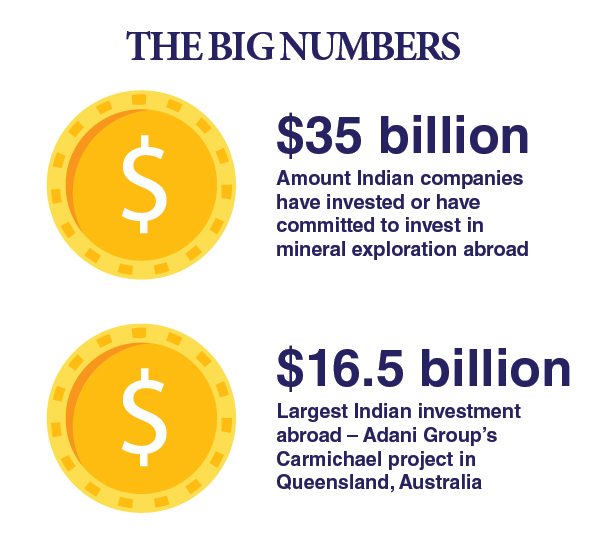 “Vankor is Rosneft’s (and Russia’s) second largest field by production and accounts for 4 per cent of Russian crude oil production. The daily peak production from the field is around 442,000 barrels of oil per day. With 15 per cent shareholding, OVL’s share of daily oil production would be about 66,000 bpd,” an official statement had said at the time of the acquisition.
Though the acquisition is of “significant strategic importance to India, both in terms of augmentation of India’s energy security as well as adding a new dimension to the relationship between Rosneft and OVL besides further strengthening the cooperation between the two countries,” as the statement said, it is by no means OVL’s first or even largest overseas foray.

Topping the list of acquisitions of overseas oil reserves is its purchase of a 16 per cent stake in Mozambique’s offshore Rovuma Area I gas field for $4.13 billion in 2013. The field holds about 75 trillion cubic feet of gas reserves.
Then, in 2001, OVL had bought a 20 per cent stake in Russia’s famous Sakhalin I oil and gas in Siberia field for $1.7 billion and later, in 2009, acquired the Russia-focused Imperial Energy for $2.1 billion. That makes the Vankor purchase the fourth by OVL.

Reliance targets the US 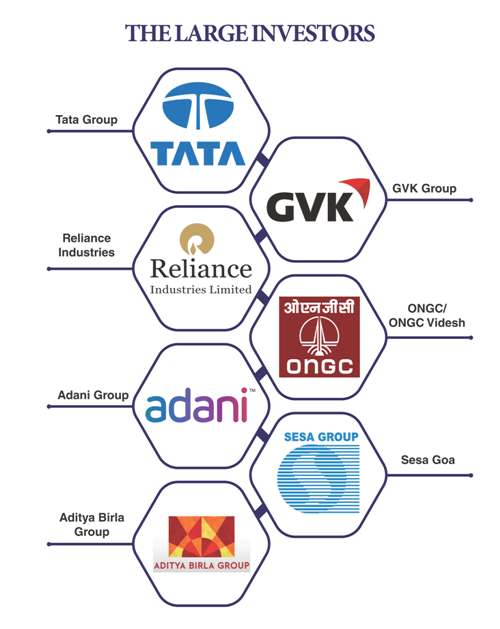 However, falling international crude oil prices have hit the profitability of its joint ventures with Chevron, Pioneer Natural Resources and Carrizo Oil & Gas.

Srikanth Venkatachari, RIL’s joint CFO, told a press conference earlier this year: “We have been scaling down our capex for the shale gas business. Looking at the energy prices, we would be further scaling down investments…”

In fact, RIL even sold one of its joint ventures with Pioneer Natural Resources last year for about $560 million.

After investing massive amounts in the US shale gas industry a few years ago, Reliance is now pulling back slowly and cutting fresh investments over the last few quarters. For example, it invested $781 million in the business last year, down a third from $1.2 billion in 2015.

Despite the lower investments and declining revenues and profits from its shale gas business, Reliance said it would focus on lowering the level of its involvement in this business even as it would retain the option of scaling it up when prices improved.

Oil and gas reserves aren’t the only mineral fuels Indian companies are scouring the world for. The Tata Group, the Adanis, the AV Birla Group and several others are also in the global market for coal assets.

Although India has the world’s second-largest coal reserves, it did not, till recently, allow the private sector to mine the mineral and sell it commercially. It permitted private sector miners to operate only captive mines for their power, cement or steel plants. Then, India also lacks sufficient reserves of coal with high calorific value. This forces many companies to go abroad for coal assets.

The Tata Group, India’s largest business house, has acquired iron ore and coal mines in Ivory Coast, Liberia, the Republic of Guinea and Mozambique in Africa. Tata Steel, which operates these mines, acquired a 35 per cent stake from Australian company Riversdale Mining for almost $90 million. The coal from these mines are exported to Tata Steel plants in Europe, India and other parts of the world.

The most controversial, and definitely the largest Indian investment in a foreign country, is undoubtedly the Adani Group’s $16.5-billion Carmichael coal mining project in Australia.

Adani Enterprises recently announced that it was ready to proceed with the project, which has faced environmental protests and legal hurdles for about seven years.

“I am proud to announce the official start of one of the largest single infrastructure and job creating developments in Australia’s recent history,” Gautam Adani, Chairman of the Adani Group, said it a statement, adding that it was “historic day for Queensland and for Indian investment in Australia.”

“We have been challenged by activists in the courts, in inner city streets, and even outside banks that have not even been approached to finance the project… We are still facing activists. But we are committed to this project,” he added in a filing made to the stock exchanges.

The group has already put in an estimated $3.5 billion in buying the Abbot Point Port, which handles bulk coal, and putting up other infrastructure. The group has already awarded contracts for the design, construction, operations, material supply and professional services. It has also awarded contracts worth at least $150 million for laying railway tracks and concrete sleepers for a 388 km railway line connecting the mine to Port Abbot.

Commenting on the project, Queensland Premier Annastacia Palaszczuk said it “is a vote of confidence not just in the Queensland economy, but in Queensland people.”

Environmentalists remain implacably opposed to the Carmichael project. One of the reasons why large infrastructure and mining projects are so difficult to execute in India is because of the opposition from environmental activists and their civil society supporters.

It seems the same problem dogs these projects in other democratic countries as well. Ecological activists claim the Carmichael project will increase carbon emission and cause irreversible damage to the Great Barrier Reef Marine Park in Queensland.

“The Carmichael mine is an economic disaster but the fact that it would pose significant risks to the environment, air pollution, and our chances of avoiding runaway climate change means that investors have also seen this project as laden with reputational risk,” Julien Vincent, Executive Director of Market Forces, an environmental lobby, said in a statement.

But in August, the Adani Group got relief from the top Australian court, which dismissed appeals against the project by an environmental group and an individual representing the rights of indigenous people. The pre-construction work on the Carmichael project will begin soon. It will generate 10,000 direct and indirect jobs and extract 25 million tonnes per annum in the first phase by 2020-2021.

Tata Power, Adani Power and Reliance Power (Anil Ambani Group) have all invested billions of dollars acquiring large minority stakes in coal mines in Indonesia and other countries to secure supplies for their power plants in India. Tata Power paid $1.2 billion for 30 per cent in Kaltim Prima Coal and Arutmin Indonesia

Tata Power invested about $1.2 billion to acquire a stake of 30 per cent each in two premium coal-producing companies Kaltim Prima Coal (KPC) and Arutmin Indonesia both owned by Bakrie Group, one of the largest mining groups in Indonesia.

But a recent Supreme Court order disallowing higher tariffs for the 4,000 MW Mundhra Ultra Mega Power Project, following an increase in taxes levied by the Indonesian government, has cast a shadow over these investments.

The Adani Group and Reliance have also been adversely effected by this order. 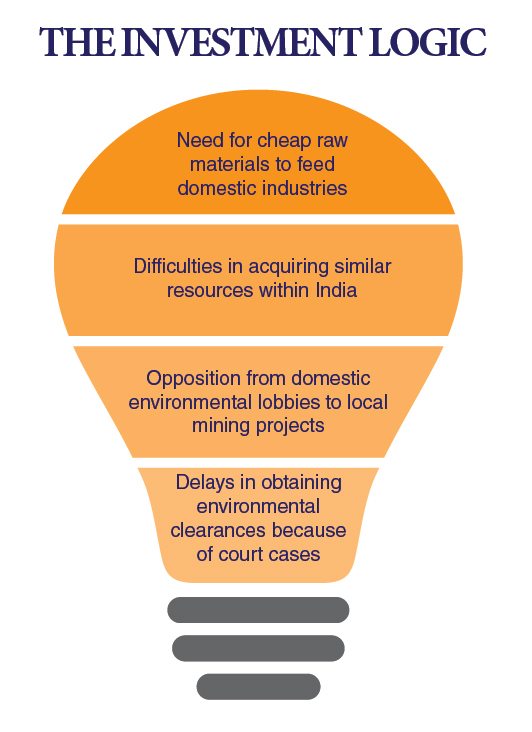 Large Indian investments in the US, Australia and Indonesia notwithstanding, Indian companies, mainly in the public sector, have focused most of their energies on the resources and energy sector in Africa, albeit not always very successfully.

As mentioned earlier in this report, OVL’s largest investment is its purchase of an interest in the Rovuma Area I gas field, which is expected to commence operations from 2022-23.

The public sector Coal India Ltd, too, has invested in Mozambique through its wholly owned subsidiary Coal India Africana Ltd (CIAL). This investment, however, was not successful as the company failed to find commercially viable blocks and finally surrendered its concession.

Like CIAL, the Gujarat State Petrochemical Corporation, too, had to surrender five oil and gas blocks in Egypt as these were not commercially viable.

But these setbacks should not be treated as failures as these are considered normal business risks in the natural resources exploration and extraction sector. Even the biggest oil and gas and coal companies in the world have to abandon many promising leads when detailed due diligence shows that data on the ground does not justify large investments.

Despite a few recent setbacks to both private and public sector companies, Indian companies retain their appetite for large and small acquisitions in the natural resources, especially in the energy sector.

“A fairly large number of our Indian clients in the metal space are actively looking for acquisitions in Australia,” media reports quoted a senior official at a large Australian bank, which opened an office in India to cash in on this appetite for natural resources among Indian companies.

With the World Bank predicting that India will grow at 8 per cent plus once the goods & services tax (GST) regime stabilises a couple of quarters from now, the hunger of Indian industrialists for natural resources across the world will only grow.