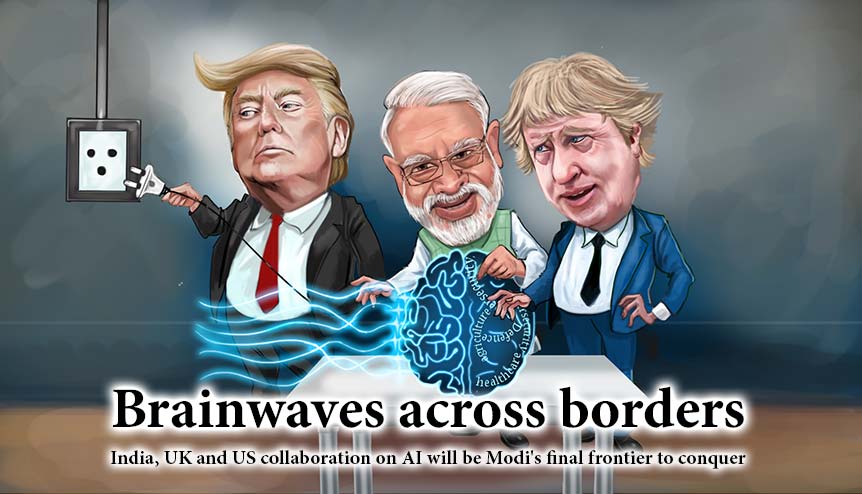 The US could explore a tech alliance with India involving artificial intelligence. This will not only have military and strategic applications but could also promote ease of living in India by revolutionising sectors such as education, healthcare and agriculture. 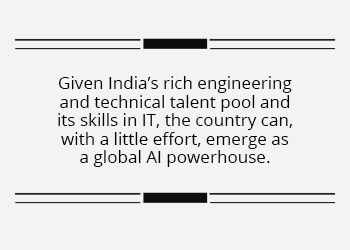 The US National Security Commission on Artificial Intelligence has recommended that Washington should formalise a technology alliance with India based on artificial intelligence (AI) as part of its overall Indo-Pacific strategy.

Such cooperation would fill the last remaining gap in the strategic cooperation between the two countries and also help India plug a critical gap in its technological capabilities. 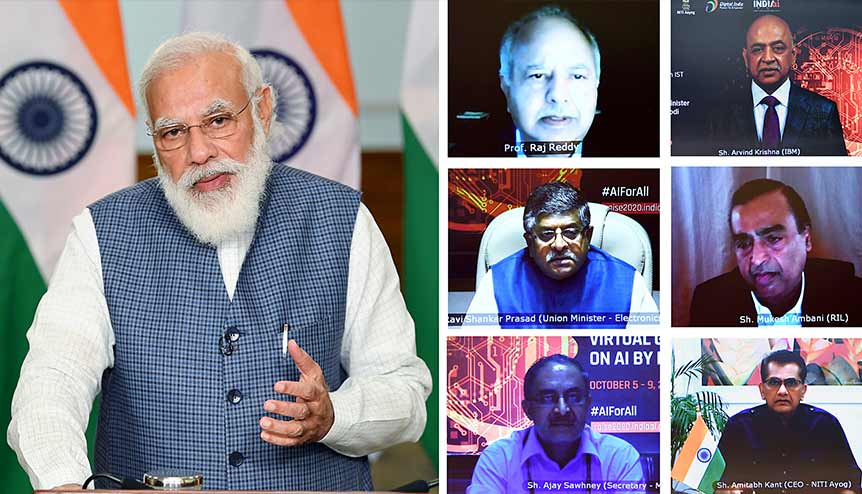 PM Narendra Modi addressing at the inauguration of the RAISE 2020, a Mega Virtual Summit on Artificial Intelligence. Given India’s rich engineering and technical talent pool, the country can emerge as a global AI powerhouse.

With this base and given India’s rich engineering and technical talent pool, the country can, with a little effort, emerge as a global AI powerhouse – especially because many experts forecast that up to 70 per cent of formal jobs in India could be automated over the next 10 years.

Modi says artificial intelligence is as real as it gets

AI can help incentivize people to use more efficient means

Indian MSMEs in the age of AI

AI is a new and emerging technology that gives machines the ability to perform cognitive tasks like thinking, perceiving, learning, problem solving and decision making. Initially conceived as a technology that could mimic human intelligence, AI has evolved in ways that far exceed its original conception.

With the science of data collection advancing exponentially in recent years, AI can be used to process this information into actionable intelligence on a variety of subjects and can be deployed to take over a variety of tasks, enable connectivity and enhance productivity.

Final frontier for India to conquer

This could be the final frontier for the Modi government to conquer and goes well with the Atma Nirbhar Bharat narrative as this is one critical area that India is still lagging in.

“India, being the fastest growing economy with the second largest population in the world, has a significant stake in the AI revolution. Recognising AI’s potential to transform economies and the need for India to strategise its approach, Hon’ble Finance Minister, in his Budget speech for 2018-19, mandated NITI Aayog to establish the National Program on AI, with a view to guiding the research and development in new and emerging technologies,” NITI Aayog CEO Amitabh Kant wrote in his introductory statement in the paper on National Strategy for Artificial Intelligence in June 2018.

This is such a brilliant infographic on the evolution of #AI .. the journey from I Repeat to I contribute and I exchange… we have indeed come a long way… but miles to go before we sleep!#Atoshttps://t.co/vo8SWJY8Zy@achyutaghosh @reemaswani @SiddiquiAsna @OfficialIndiaAI pic.twitter.com/skoeUH5uHR

AI has applications not only in defence but also in areas such as healthcare and social well-being – the latter being in line with Modi’s emphasis on Ease of Living. It also telescopes well into Modi’s call for Indians to reskill and upskill themselves.

“#AIforAll will aim at enhancing and empowering human capabilities to address the challenges of access, affordability, shortage and inconsistency of skilled expertise; effective implementation of AI initiatives to evolve scalable solutions for emerging economies; and endeavours to tackle some of the global challenges from AI’s perspective, be it application, research, development, technology, or responsible AI,” Kant wrote. 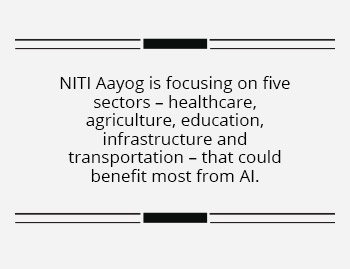 NITI Aayog is focusing on five sectors that could benefit most from AI. They are:

* Increasing access and affordability of quality healthcare,
* Enhancing farmers’ income, improving farm productivity and reducing crop wastage,
* Improving access to and the quality of education,
* Improving the efficiency of and connectivity in Smart Cities, and
* Providing smarter and safer modes of transportation and better traffic and congestion management solutions.

The think tank has identified the following challenges to widespread AI adoption in India. These include:

The following statistics make for grim reading. The Global AI Talent Pool Report says India has only 386 out of 220,000 PhD holders in AI globally. This is corroborated by Scopus, a global citation database, that has very few citable AI research documents coming out of India – compared to the US, Europe and China.

These findings are validated by data from the NITI Aayog paper on “National Strategy For Artificial Intelligence” that says India produces 2.6 million science, technology, engineering and mathematics (STEM) graduates a year but only a negligible number of them go into research and fewer still into AI.

Unless India gets its act together fast, it risks being left behind in this important field that could provide countries with a decisive competitive advantage in the 21st century. There is also a strategic dimension to this issue. India’s northern neighbour and rising Asian hegemon China is fast emerging as a global leader in this field. It is increasingly using AI in its defence and cyber applications and unless New Delhi takes up this issue in mission mode, it risks missing the global bus altogether.

Only through tackling the skills gap will India become truly Incredible 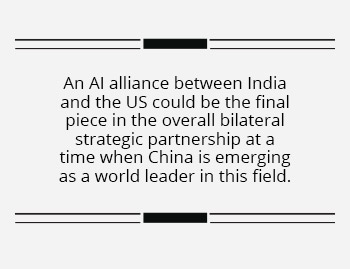 How corporate India can solve the skilling puzzle

Alliance with US could plug critical gap in India’s capabilities

As mentioned above, an AI alliance between India and the US could be the final piece in the overall US-India strategic partnership at a time when China is fast emerging as a world leader in AI and cyber warfare. AI could also bring India and the UK closer as the two countries have existing protocols in place for deeper understanding and cooperation in this area.

“India’s biggest focus has been #ResponsibleAI & #InclusiveAI. Confident that with this approach, #AI can turn out to be the biggest equaliser to bridge the gap between the haves and the have nots”, @debjani_ghosh_ shares her views with @DDIndialive.@amitabhk87 @SecretaryMEITY https://t.co/JX0lfIx79K 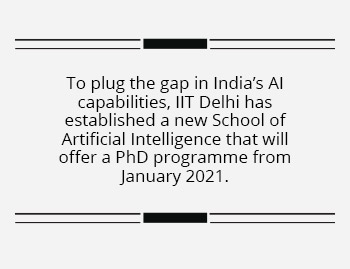 To plug the gap in India’s AI capabilities, the Indian Institute of Technology (IIT) Delhi has established a new School of Artificial Intelligence (ScAI) that will offer a PhD programme from January 2021. It is also planning to offer postgraduate degrees in the subject soon.

“The future progress of a nation will depend on its AI capability. Therefore, many countries have started investing heavily in AI. India is also responding to this,” IIT Delhi Director Prof. V Ramgopal Rao told the media. 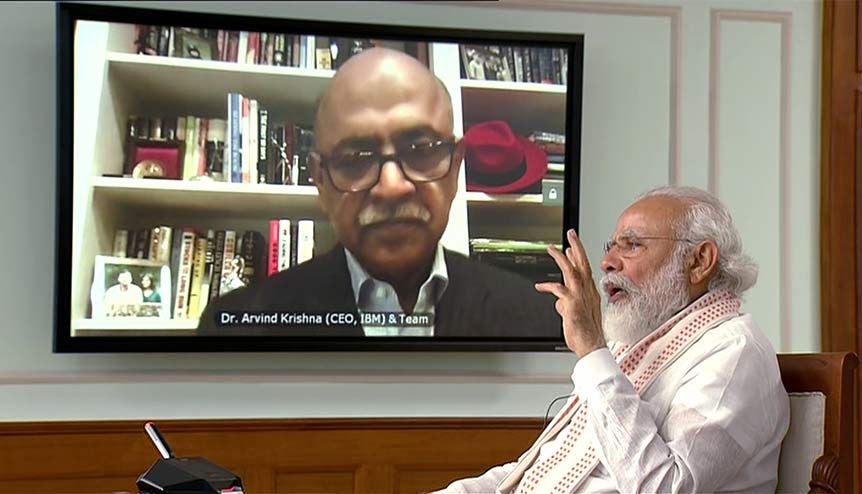 Prime Minister Narender Modi interacted with IBM CEO Arvind Krishna via video conferencing. The Modi Government has signed an agreement with IBM to carry out a Train-the Trainer programme in basic artificial intelligence throughout India.

In this context, the Modi government has also signed an agreement with US-based IT giant IBM to carry out a Train-the Trainer programme in basic artificial intelligence throughout India, an official government statement released at the time of signing the agreement had said last year.

As part of the programme, experts from IBM will train teachers at ITIs in basic AI skills to empower them to use technology in their day-to-day training activities. Besides this, the trainers will learn workflow and application of artificial intelligence in their training modules. 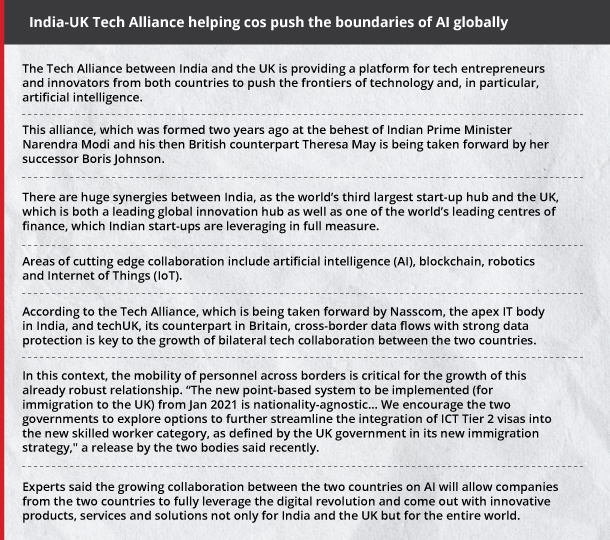 “IBM aims at training 10,000 faculty members from ITIs across the country and the programme will be executed over a period of one year with 14 trainers across seven locations with over 200 workshops,” the statement added.

It has become imperative for workers in many industries to be empowered with digital skills as this provides them with an edge as India enters the Industry 4.0 era.

“Programs for training the trainers that bridge the technological gap between the students and teachers are the need of the hour. These programs will ensure the passing of industry-relevant skills to students, promoting better learning and better retention by the students,” RK Singh, Minister of State, Ministry of Skill Development and Entrepreneurship had then told the media.

That is why closer cooperation in AI with the US is necessary not only for strategic reasons but also to help Indians scale up the technology ladder in a new and emerging field that where the global leadership hierarchy is still wide open.