The controversial and much delayed Turkmenistan-Afghanistan-Pakistan-India (TAPI) gas pipeline is finally getting a move on – a full 22 years after it was conceived.

Following the groundbreaking ceremony last December, India will host the next meeting of the Steering Committee which has been formed for the $7.6-billion, 1,814-km-long pipeline that will transport gas from the Central Asian republic of Turkmenistan to India to feed its power plants and meet its energy security needs.

The initiative to hold the meeting in the Indian capital was taken by Prime Minister Narendra Modi when he met the Turkmenistan President in Ashgkabad last year.

The revival of the project marks a real step-up in India’s hitherto lukewarm engagement with Central Asia and is the culmination of Modi’s proactive outreach to the five “Stans” – Uzbekistan, Kazakhstan, Turkmenistan, Kyrgyzstan and Tajikistan – which gained momentum following his very successful visit to the region in 2015.

Why the 5 Stans are important

Central Asia and, particularly, the five republics that form the core of the region, is crucial to India as a source of raw materials such as oil and gas as well as uranium and it is also a potentially large market for Indian exports.

Kazakhstan, which has 15 per cent of the uranium reserves, is the world’s largest producer of this strategically critical mineral and accounts for more than a third of global supplies and Turkmenistan has the fifth-largest natural gas reserves in the world.

India has also signed an agreement with Uzbekistan for the supply of 2,000 tonnes of uranium to feed its nuclear reactors – on the same lines as the pact with Kazakhstan.

Given the millennia-old ties that bind India with the region – Babur, the founder of the fabled Mughal dynasty, hailed from Uzbekistan – New Delhi views Central Asia as part of its extended neighbourhood.

Following the collapse of the Soviet Union in 1991, Uzbekistan, Kazakhstan, Turkmenistan, Kyrgyzstan and Tajikistan proclaimed independence, setting off what some experts have called The Great Game 2.0 – intense jockeying among Russia, China and the US for influence in the region and access to its raw materials.

India has been a late entrant to this game, primarily because of its traditionally diffident foreign policy stance. Although the previous UPA government did come out with a Connect Central Asia Policy, the attempted outreach petered out partially because of a missing concerted push to see it through and partly because the landlocked region lacked direct connectivity with India.

It was only after Modi came to power in New Delhi in 2014 that the Indian foreign office began to take an active interest in the region and the Indian establishment woke up fully to the commercial and strategic opportunities in Central Asia.

“We share deep historical, cultural and civilisational links. Tajikistan is nearest to India among all Central Asian countries. We are separated by a narrow corridor. Our linguistic links are the closest in Central Asia… We discussed measures to tap the rich potential in trade and commerce and to encourage joint ventures and investments,” the Indian Prime Minister had said after his meeting with Emomali Rahmon, President of Tajikistan.

The lack of direct connectivity is the main reason for the absence of large Indian private sector investments in the five Central Asian “Stans”. Two PSUs, ONGC Videsh and Punjab National Bank have a presence in Kazakhstan.

Among private companies, the Sun Group operates the Yubileinoye gold mine in Kazakhstan, while EPC contractors like KEC International and Cosmopolitan Builders have bid for, won and completed projects in Tajikistan.

The pipeline project referred to earlier is by far the most serious economic engagement that India has with the region and could set the tone for more investments and closer business relations.

The economic and energy security aspects apart, there is also a strategic intent behind India seeking closer business links with the region.

India is keen on procuring gas from Turkmenistan’s Galkynysh gasfields – the world’s fourth largest. It has to ensure that China, which is building its One Belt One Road project through Turkmenistan and is the largest buyer of the country’s gas, does not swoop in and grab the project, which is being financed by the Chinese Development Bank.

In order to access oil, gas, uranium and other minerals from these Central Asian republics and also open up this market for Indian businesses, the government is pressing ahead with two large connectivity projects.

The most important of these is the International North South Transport Corridor, the agreement for which was reached between Russia, Iran and India 17 years ago. The project, which is now backed by 13 countries, envisages opening a sea route from Mumbai to Iran’s Bandar Abbas port and then on to Bandar-e-Anzali on the coast of the Caspian Sea. From here, road and rail transport will carry the material to Central Asia via Russia.

Most importantly from India’s perspective, the route bypasses Pakistan and completes the journey from Mumbai to Central Asia in 25-30 days compared to 45-60 days that it currently takes goods shipped via the Suez Canal.

The second route runs through Iran’s Chabahar Port from where a road and rail corridor will help transport goods shipped from Mumbai to Central Asia. Incidentally, Japan has expressed interest in partnering India and Iran on this project.

SCO and the Dragon Dance

Another important step towards increasing Indian engagement with the five Central Asian republics – critical for accessing its raw materials for Indian industrial and strategic needs – is India’s membership of the Shanghai Cooperation Organisation (SCO).

At a time when major powers like Russia, China and the US are jockeying for influence and resources in the five Stans and even Pakistan has thrown its hat into the ring primarily to outflank India in this game, membership of the SCO will act as a force multiplier for New Delhi in Kazakhstan, Kyrgyzstan, Tajikistan, Turkmenistan and Uzbekistan.

India was given observer status at the SCO in 2005 and though it has always wanted to play a larger role in the region, it was had to remain content being a marginal player. New Delhi’s hopes rose when the moratorium on admitting new members was lifted in 2010 but it is only now, following proactive lobbying by the NDA government, that India has become a full member.

This has raised expectations that the Modi government will now be able to play a role as a stabilising factor in this volatile region, though it will have to contend with an aggressive Beijing that will do everything in its power to ensure that its dominance is not challenged.

China is clearly ahead of every other country in this regard. It is already the largest trading partner of four of the five countries in the region, its One Belt One Road promises to connect these countries with itself and the world and it is spending billions of dollars on mining and industrial projects. It is helped by the fact that it shares a border with Kazakhstan, Kyrgyzstan and Tajikistan.

Beijing has also provided $10 billion in aid and grants to this region and its trade with the five countries is more than $50 billion (the comparable figure for India is $2 billion).

The US, which was the last great power to enter the region in the aftermath of the Soviet collapse, shares a strategic convergence with India as neither country wants these five states to come under the exclusive or even dominant influence of either China or Russia.

To take its ties with Uzbekistan forward, the Indian government has proposed to extend the Friendship Railway Bridge to Herat in western Afghanistan.

But strategic affairs experts say that India’s energy security needs in Central Asia will be best served by continuing the present warm relationship with Moscow, even as it allies with the US, and maintaining the friendly ties with the five republics.

India’s sporadic and anaemic ties with the five Stans of Central Asia underwent a paradigm shift following Prime Minister Modi’s successful visit to these countries two years ago. He became the first Indian Prime Minister to visit all five states on a single trip.

Looking to seal agreements to ensure India’s energy security, open up these hitherto virtually untapped markets for Indian goods, win allies in the fight against terrorism and counter growing Chinese influence in the region, Modi said: “We are both located in the proximity of the main source of terrorism. Combating terrorism and extremism has always been an important and productive area of cooperation. At a time of growing threat of terrorism, we have resolved to intensify our cooperation further.”

In Kyrgyzstan, where the two countries signed agreements to cooperate with each other in the fields of information technology and medicine and explored the possibility of generating power from that country’s massive untapped hydro potential, the Prime Minister repeated the theme that found ready takers among his hosts.

India and Kyrgyzstan, he said, “shared interest in combating extremism and terrorism that has become a threat without borders… We see an important place for Central Asia in India’s future. We can reinforce each other’s economic progress.”

The Prime Minister also pushed for early revival of the stalled TAPI gas pipeline in his talks with the Turkmenistan leadership.

“The most significant initiative in our relationship is the TAPI gas pipeline. This could transform regional economic cooperation and bring prosperity along the route… We underlined the need to implement the project quickly,” Modi said.

This project is now underway and is expected to be completed in 2020.

“Kazakhstan is our biggest economic partner in the region. We will work together to take economic ties to a new level,” the Indian Prime Minister said after his talks with that country’s President, Nursultan Nazarbayev.

The two countries also signed agreements on boosting cooperation and business ties in sectors such as defence and railways, besides, of course, the pact on uranium supply.

“We are pleased to have a much larger second contract for purchase of uranium with Kazakhstan and expanding our civil nuclear cooperation,” Modi said.

The Prime Minister and his team also signed agreements on combating terrorism and increasing economic relations with Uzbekistan and Tajikistan.

The gas pipeline remains the most visible and most expensive project involving India and Central Asia.

“I strongly believe in this project, and this is the position of Turkmenistan. It is not just a commercial project, but one which will be a good foundation for providing peace and security in the region,” said Deputy Prime Minister and Foreign Minister of Turkmenistan Rashid Merodov after a recent meeting with Indian Petroleum Minister Dharmendra Pradhan.

The 56-inch pipeline has a capacity to carry 3.2 billion cubic feet per day (bcfd) of gas from Turkmenistan to India via Afghanistan and Pakistan. Pakistan and India will each get 1.325 bcfd gas while Afghanistan will get 0.5 bcfd gas.

Energy security, defence ties, trade and geo-politics will dictate the future of India’s relationship with the five Stans of Central Asia. The TAPI pipeline will play a major role in this by tying up a part of Turkmenistan’s gas revenues to India’s continued growth. It will also give that country a stake in India’s future. More deals for the exploitation and supply of oil and gas are likely with this country and its neighbours.

The agreements for the supply of uranium will, likewise, boost both India’s N-security and provide the two Central Asian republics with a steady and responsible customer for this very rare and highly restricted raw material.

And with India under Modi finally waking up to claim the regional geo-strategic legacy of the British Raj that post-Independence Indian governments had frittered away, the future looks bright for further and deeper economic and geo-political ties between New Delhi and the five republics of Central Asia. 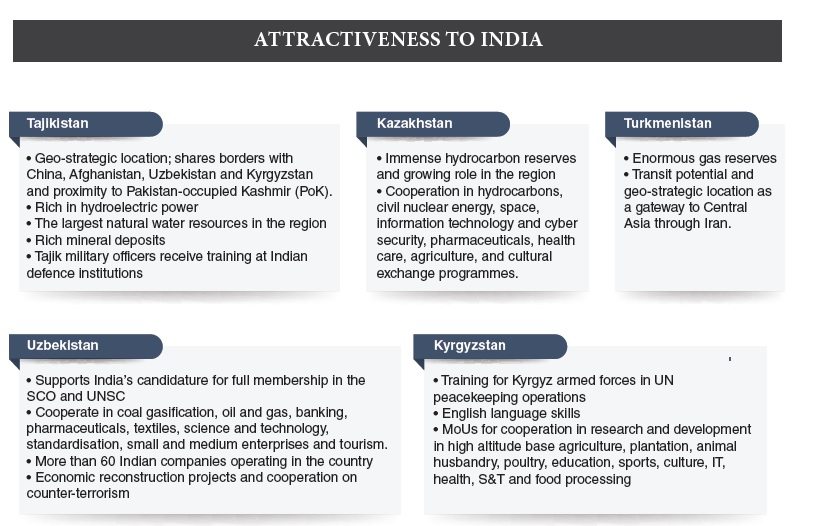