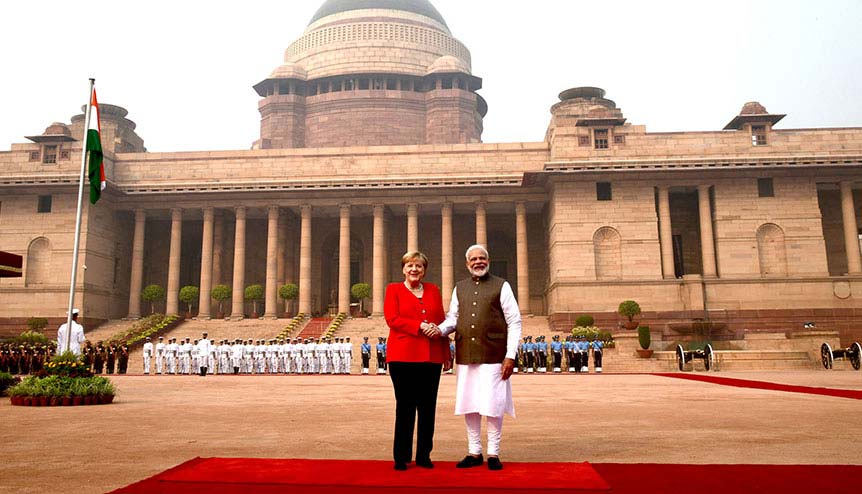 India and Europe are working on the blueprint of a new foreign policy structure. The Modi government seems to have decided to invest further in the relationship with the continent, and more specifically, particular countries within it.

India is reaching out to the EU and is deepening trade and strategic partnerships with individual EU members in preparation for a post-Covid world. The recent visit of Indian Foreign Secretary Harsh Vardhan Shringla to Paris, Berlin (and London) should be seen in this context.

Many foreign policy analysts have taken note of the fact that Shringla chose to visit Western Europe, and not Russia, the US or Japan, for his first visit abroad after the outbreak of the Covid-19 pandemic.

India-EU ties may be coming of age at last

A healthy approach to India-UK ties

With the US in the throes of what is increasingly looking like a political and constitutional crisis and with India’s relationship with China looking more fraught by the day, the Modi government seems to have decided to invest further in the relationship with Europe, and more specifically, particular countries within it.

There is a growing realisation in Europe that the rise of China is not only about trade, tourism and investment. With ugly facts like strategic coercion, debt trap diplomacy, territorial expansionism, domestic political repression and military aggression abroad by Beijing now out in the open, there is greater acceptance in both New Delhi and Europe that stronger bilateral ties can be a force for international good.

In his talks with German officials, Mr Shringla said: “As you know, India has faced multiple challenges in the recent months due to the pandemic, tensions on our northern border (with China) and the ever-present menace of terrorism on our western border (with Pakistan).”

Highlighted importance of India and EU to work together in healthcare, digital, climate action, counter-terrorism and towards a reformed multilateralism.https://t.co/gGqvIFn8R7 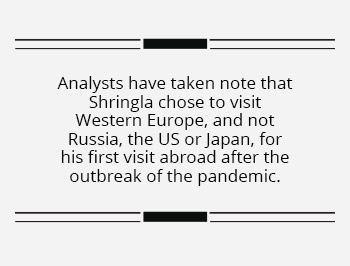 Referring to the recent knife attacks and shooting incidents in France, he added that Europe is seeing a “manifestation of extremism” linked to Islamic radicalism to drive home India’s oft repeated point that terror “knows no boundaries”.

“Unfortunately, the terrorists are united in purpose and action while we, the victims, are yet to be so. Ironically, some countries that are the fountainhead of terror are practising dissimulation and claiming to be victims of terror to gain international sympathy,” he told his German hosts.

Shringla did not mention either country by name but left no one in any doubt about who they were. And unlike in the past, when such references would be met with polite smiles, this time, there was an acceptance that India as raising issues that concerned both sides.

There is, thus, a realisation on both sides that the rising tide of terrorism and the not-so-peaceful rise of China pose a challenge to the global order. In this context, India and the EU – particularly, countries like France and Germany within it – as well as the UK, are realising that they are natural partners because of their shared vision of a rules-based global order, sustainable development and trade and investment.

Germany’s #IndoPacific Guidelines is an example of a positive shift in EU’s interest in #Asia – EAM @DrSJaishankar in conversation during a @CEPS_thinktank event with @karel_lannoo, @SoerenGade and Ana Paula Zacarias.
Watch the full discussion at https://t.co/z0iigJ9X1O https://t.co/jwrk0pqbxr 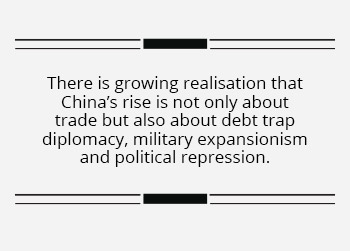 In fact, France and Germany have already announced a new pivot to the Indo-Pacific that, in many ways, complements the Quad, comprising India, the US, Japan and Australia. France has gone so far as to describe India as its foremost strategic partner in Asia.

Germany, too, signalled a subtle shift in in Asian goalposts when it became the second EU member after France to formally announce a new policy on the Indo-Pacific that calls for Berlin to make “an active contribution to shaping the international order in the Indo-Pacific”.

On an earlier occasion, German Foreign Minister Heiko Maas had said this region “is where the shape of the international rules-based order of tomorrow will be decided. We want to help shape that order – so that it is based on rules and international cooperation, not on the law of the strong.”

It is pertinent that Germany has included the word “Indo” in its strategic doctrine for the region. This marks a diplomatically significant turning point in the traditional German policy of treating China as the central point of the Indo-Pacific.

Brussels warming up to New Delhi 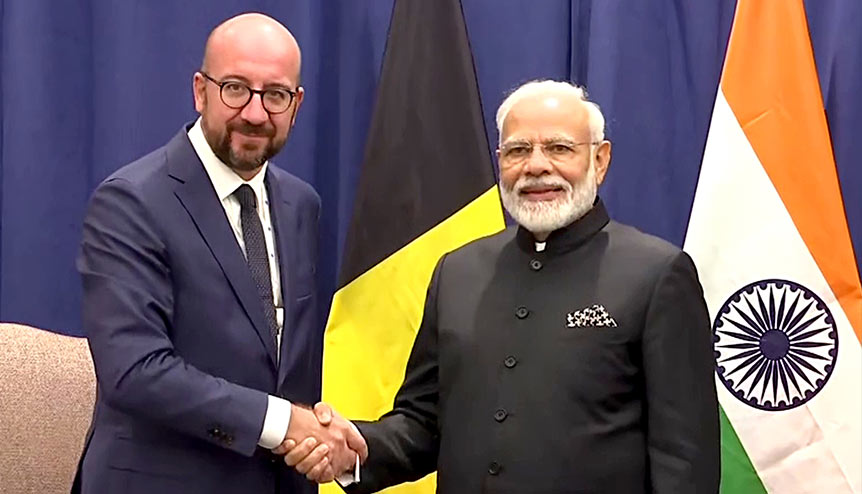 Meanwhile, even as India is strengthening its bilateral relationship with the two EU powerhouses (as well as the UK), making them central to its Europe strategy, there are indications that Brussels, which has traditionally been cool to the idea of closer ties with New Delhi, now wants to bring the relationship out of the cold storage.

This became evident at the virtual summit between the two sides on July 15 this year – the first such meeting after a gap of two years – although it has been in the works for a few years now.

External Affairs Minister Dr S Jaishankar holds a meeting with his counterparts from QUAD (India, Japan, Australia and USA). Germany and France have also joined an Indo-Pacific grouping that recognises India as a strategic partner in Asia.

Signs of thaw began to show up in official documents in 2018 when the EU hailed India as an important pillar in a multi-polar Asia and released a new strategy for mutual cooperation that was crucial for promoting peace in the region, creating jobs both in India and in the EU, boosting economic growth and achieving the sustainable development goals committed by each side in the Paris climate pact.

The excellent dialogue at the #IndiaEUSummit concludes as PM @narendramodi, @eucopresident Charles Michel and President of @EU_Commission @vonderleyen set a template to further strengthen the India-EU Strategic Partnership. See the outcome documents at https://t.co/PDlBRULpJw pic.twitter.com/2yTar0hI6X

Both sides decided to strengthen the India-EU Strategic Partnership, based on shared principles and values of democracy, freedom, rule of law and respect for human rights that aim at delivering concrete benefits for the people in India and the EU.

India strides across Asia with its influence and inspiration

India staying away from RCEP is a good move

Respect for multilateralism and a rules-based order

India and the EU, which are home to the largest concentration of free people in the world, affirmed their determination to promote multilateralism and a rules-based global order with the United Nations and the World Trade Organisation at its core.

I would like to thank India for the cooperation your country has shown with the EU. I would like to pay tribute to your role nationally and internationally, multilaterally in combating COVID19 pandemic: European Council President Charles Michel during India-EU Summit pic.twitter.com/qqZuGjh3C8

In this context, the two sides also agreed to increase their cooperation on international security, strengthen their response to global health emergencies such as the Covid-19 pandemic, enhance global economic stability and inclusive growth, implement the Sustainable Development Goals and protect the climate and the environment.

The statement also affirmed EU’s enthusiasm for India’s G-20 Presidency in 2022 and its non-permanent membership in the UN Security Council in 2021-2022. 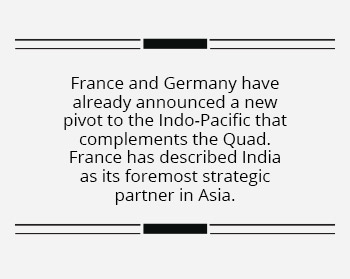 Despite such good intentions, there are several trials that have to be overcome before the full potential of closer Indo-EU ties can be unleashed.

The foremost among them is the India-EU trade pact, which has been pending since 2007. The talks are stalled because of Brussels’ insistence on easier market access for goods, a stronger intellectual property regime that will hit the Indian generic pharmaceuticals sector and environmental and social clauses that India considers extraneous to trade without any reciprocal concessions on granting easier access to Indian professionals.

The 3 R approach that EU & India are using:

Is removing barriers to trade between Europe & India and is the way forward: @PiyushGoyal

It is imperative that the EU realises that services constitute about 60 per cent of the Indian economy and that India’s main competitive advantage lies in the skills of its professionals. Unless the EU concedes ground on this issue, it could be well-nigh impossible for India to make concessions in other areas.

China’s growing unpopularity not just with a majority of EU member governments, but also their populations, is indicative of widening cracks in the EU-Beijing relationship, says Mahika Sri Krishna: https://t.co/acaNhK5q2x

Closing ranks against the rising hegemon

But with the world’s leading democracies taking note of the rising new hegemon in Asia and with India getting into a closer strategic clinch with the two engines of EU’s global reach (as well as recently departed powerhouse UK), diplomatic circles in India expect Brussels to be more flexible in its future negotiations with New Delhi.

As mentioned above, some signs of that are already visible. And that’s good for the EU, India and the world at large.