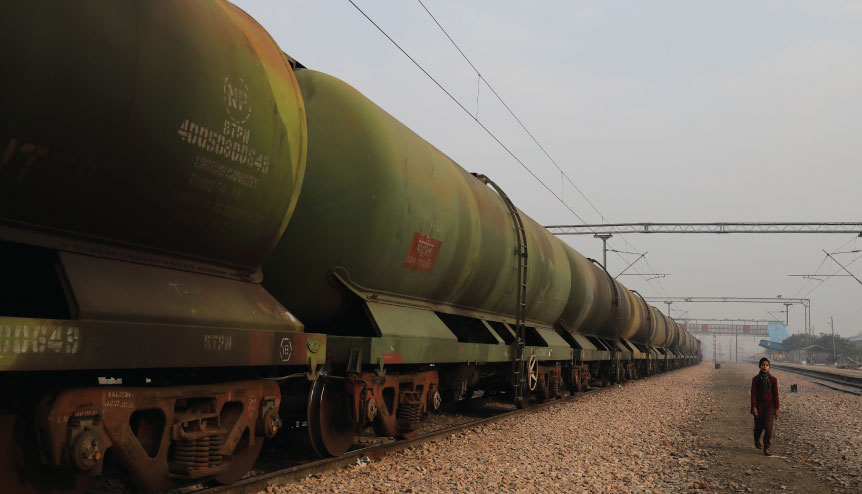 India has opportunistically bought and stored cheap oil. As it actively ramps up strategic petroleum reserves from its current base of 9 days to 90 days cover, private players can find ways to benefit in this ten-fold capacity buildout.

The dust is just about settling a month after the West Texas Intermediate (WTI) crude prices dropped into negative territory for the first time in history, and there are number of takeaways for the Indian government as it looks to enhance its energy security in the future. How is this related to the country’s financial health? The answer lies in the fiscal deficit which is intrinsically linked with oil imports that constitute around a quarter of the import bill.

Moreover, amidst the Covid-19 related economic slowdown, there will be a renewed focus on carefully managing the finances. Import volumes have been rising at a rapid 4 per cent a year and in the context of a multi-year low in prices, the world’s third largest oil consumer can be innovative in its approach to capture value, thereby cushioning the widening fiscal deficit. A multipronged approach involving building and renting storage facilities and using financial derivatives for hedging will enable India to achieve its energy and financial security goals. 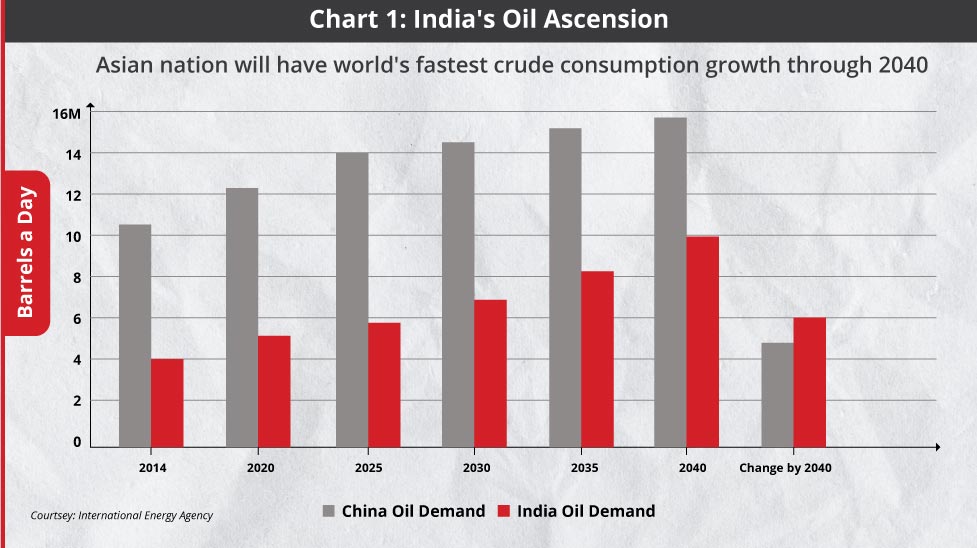 While domestic crude production declines (table 1) and consumption growth soars (chart 1), there will be a natural need for raising storage capacity to ensure energy security.

Strategic Petroleum Reserves (SPRs) – Assets that give security and flexibility

It was the first Gulf War of 1991 that brought to India’s attention the importance of building strategic reserves. With the country already in economic crisis at the time, the oil price shock only aggravated the existing financial condition. The national energy policy has come a long way since, and in 2005 the Vajpayee government and the Indian Strategic Petroleum Reserves Limited (ISPRL) began the buildout of what is today a 39 million-barrel (9 days of national oil consumption) SPR capacity. 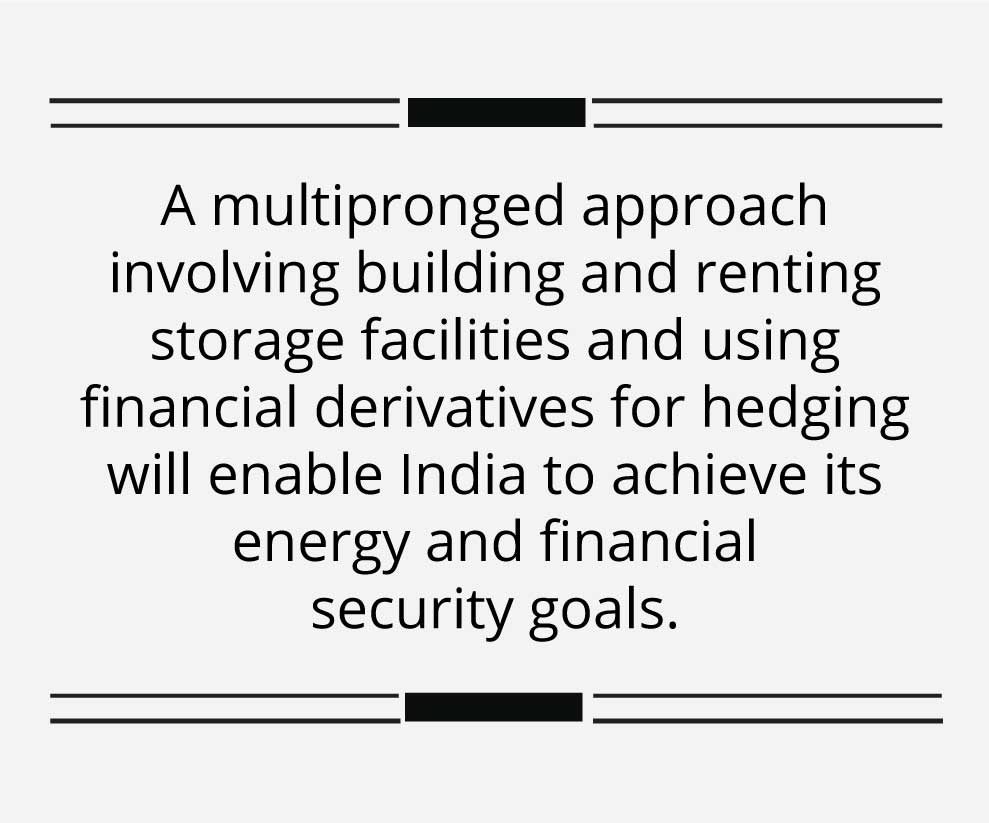 Recently, the Petroleum and Natural Gas Ministry explored options for renting offshore SPR capacity in the US and Saudi Arabia. This enabled the domestic shale producers in the former that are coming under severe financial pressure to offload production, while simultaneously giving India the chance to capture the prevailing prices of around $30/barrel. Furthermore, nearly 50 million barrels of floating storage (oil tankers) has been utilised as the contango – which is the difference between near term and long-dated oil prices – offered attractive levels for buying, storing and hedging the volumes.

As two more onshore storage sites are under construction in India which should add 47.7 million barrels, the ISPRL has floated tenders for enabling private companies to participate in a rapid expansion and maintenance of SPR facilities. Yet, more would have to be done to establish the target of 90 days of reserves. This brings attention to the increased need for public-private partnership in the coming years. A ten-fold increase in capacity is needed, and it likely to pay off for private asset-backed traders or oil companies making avail of flexibility of the storage in part, in order to further domestic commercial operations. 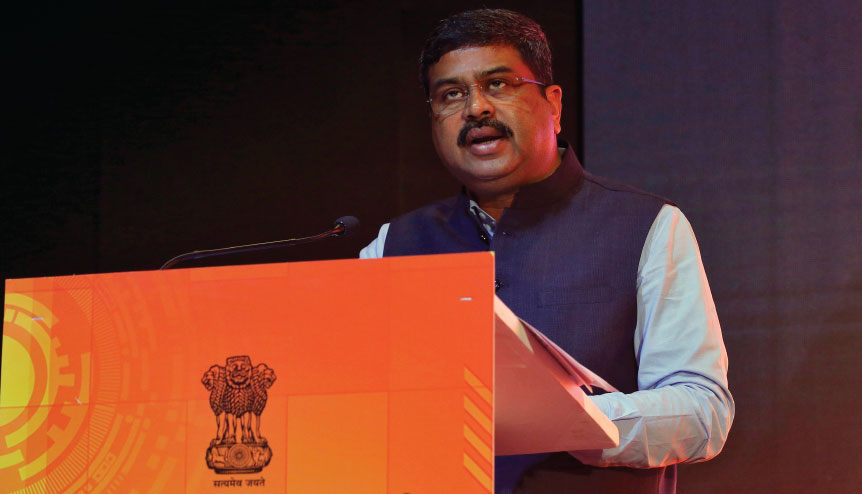 Will there be further reforms to attract private players? The once closed market is slowly opening to FDI. As refineries garner multi-billion-dollar investments from the likes of Rosneft and Saudi Aramco, storage access will gain both importance and value. Already there are signs that Saudi Arabia is exploring how they can deepen their interests in the Indian oil space by participating in reserve capacity building.

Financial derivatives – can they help in budgeting? 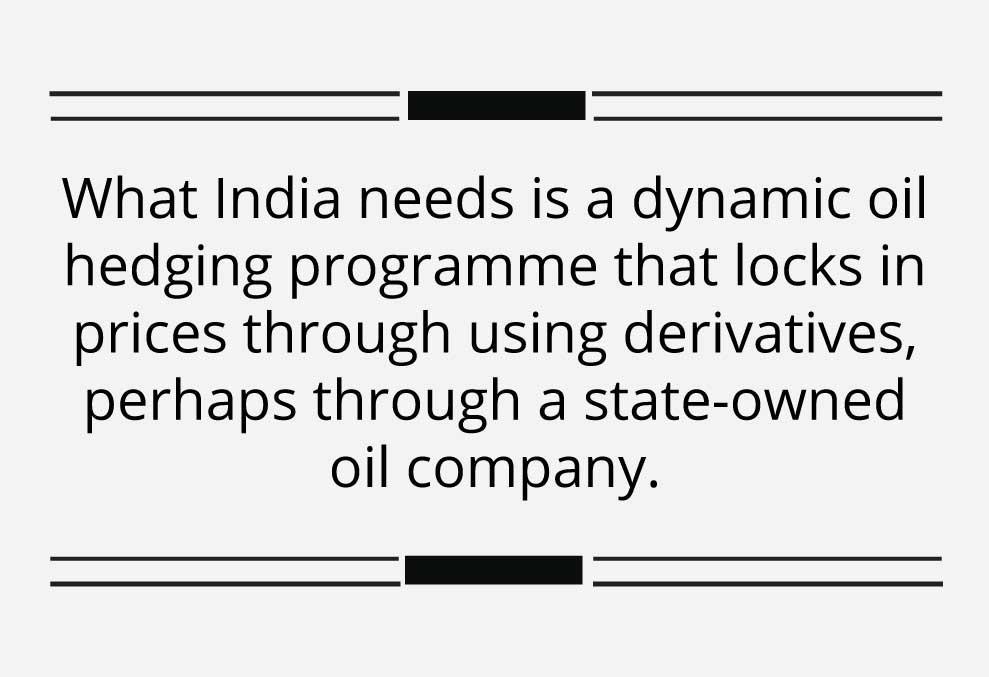 The government announced that that it has 20 per cent of India’s annual fuel demand in storage in the aforementioned SPRs, floating, offshore and domestic private capacity, but why should it stop there? Setting aside margins for buying futures and options structures that enable financial participation in long term upside in prices would be operationally simple. What India needs is a dynamic oil hedging programme that locks in prices through using derivatives, perhaps through a state-owned oil company. Although the volatility in marked-to-market PnL of such a “trade” and basis risks (the price difference between the derivative contract, example North Sea Brent and the physical oil procured from non-North Sea suppliers) may raise scrutiny of such operations, the ability of the government to take advantage of low pricing can drastically enhance the reliability of its revenue and expense forecasts.

About the Author: Surya Kanegoakar