Does a no-deal Brexit bode well for UK-India ties?

Does a no-deal Brexit bode well for UK-India ties? 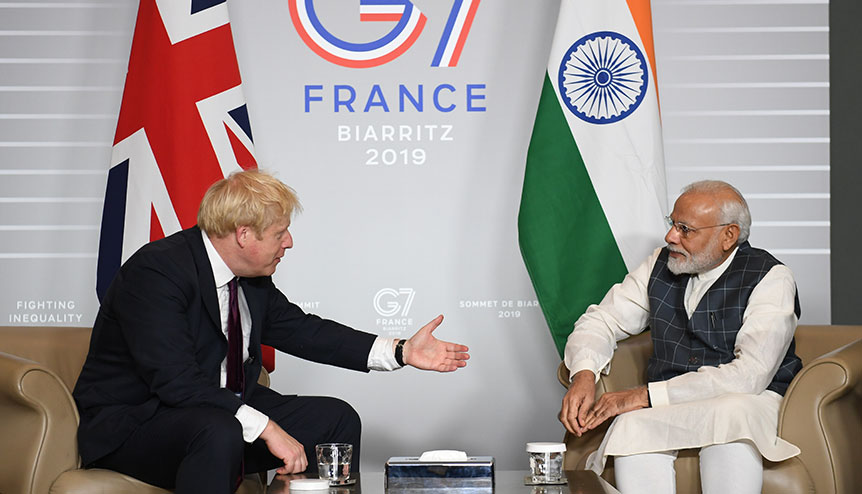 If the UK were to leave without an agreement in place with the European Union (EU) by the October 31 Brexit deadline, the reverberations will be felt around the world – including in India.

Unprecedented developments have a direct connect with a propensity to speculate, and Brexit undoubtedly falls within that category.

Boris Johnson lobbed a bombshell in the form of parliamentary suspension plans ahead of the October 31 Brexit deadline as part of a particularly frenzied return from the UK’s summer holiday break of August. The so-called “silly season” for news, dubbed as such due to the long parliamentary recess depriving the media of solid political headlines, came to an abrupt end as the UK Prime Minister declared his “bold and ambitious” agenda for a new post-Brexit government.

The motivations behind the move are quite clearly directed at skirting the parliamentary hurdles that proved insurmountable for his predecessor, Theresa May, and also goad the EU into action in an effort to avert a no-deal crash-out with a last-minute offer on the controversial Irish backstop clause.

While Johnson was at pains to insist his decision had nothing to do with blocking rebel MPs from activating legislative drives against an EU exit without a deal in place, the timing of the move can hardly be misunderstood. The Opposition parties and rebels within his own Conservative party have since gone on overdrive to prevent what they have branded an unconstitutional stance to prorogue Parliament until October 14, leaving hardly any days in the calendar for Brexit scrutiny.

“However it is dressed up, it is blindingly obvious that the purpose of [suspending Parliament] now would be to stop [MPs] debating Brexit and performing its duty in shaping a course for the country,” said a furious John Bercow, the Speaker of the House of Commons – a post traditionally expected to stay out of expressing an opinion on such matters.

The move will continue to play out in the coming weeks, including facing legal challenges brought by anti-Brexit campaigners as well as street protests. But beyond this landscape of the latest standoff over an issue that has deeply divided the UK, it remains to be seen how the outcome plays out in the context of the UK’s relationship around the world – including with countries like India.

The Donald Trump administration has already expressed its glee at the hard Brexit stance being pursued by the Boris Johnson led government.

A recent Twitter message, characteristic of the US President, read: “Would be very hard for Jeremy Corbyn, the leader of Britain’s Labour Party, to seek a no-confidence vote against New Prime Minister Boris Johnson, especially in light of the fact that Boris is exactly what the UK has been looking for, & will prove to be a great one! Love UK.”

He has previously spoken equally gushingly about the prospect of a wide-ranging free trade deal with the UK after it is rid of the “anchor round its ankle” in the form of its EU membership.

The Indian government has been conspicuous in its fairly non-partisan stance on Brexit, playing it in the spirit of an internal issue that needs resolution which would eventually have an impact on bilateral relations. As Dominic Asquith, the British High Commissioner to India, told the media in India recently, the importance of developing trading and investment relationships, not just with European mainland but with major partners abroad, will be “even more important” once Britain has left the EU.

He noted: “Brexit is causing some companies to delay decisions, that tends to be the expansion of companies which are based in the UK. It does not seem to be stopping Indian companies from investing in the UK.

“Last year alone, 50 Indian firms had invested in our country. So the number is rising.”
And, that sense of confidence in the UK economy among Indian companies remains fairly consistent. However, the factor that would come into play if indeed the UK and EU fail to agree upon the terms of their divorce, would be one of prioritising. The likelihood of Britain becoming preoccupied with grappling with the fallout of a no-deal Brexit over and above international relations is quite a strong one.

On the other hand, the EU member countries themselves have a direct bond with India, which they would inevitably try to further bolster. French President Emmanuel Macron has made no secret about wanting to build upon the rising numbers of Indian tourists and students to Britain’s neighbouring country.

Boris Johnson seems to have taken this reality on board and during his meeting with Indian Prime Minister Narendra Modi on the sidelines of the G7 summit in Biarritz, France, in late August, the two leaders agreed to set up a dedicated team to work on the UK-India economic relationship.

“The principal discussion was focussed on how in the post-Brexit scenario, we can develop the partnership and strengthen economic and commercial relations,” Indian foreign secretary Vijay K. Gokhale told the media following their talks – the first since Johnson took charge at Downing Street.

The optics seem to be well in place, but post-Brexit realities are likely to trigger certain unknown variables that could throw some of the planning awry. However, given the unprecedented nature of what is set to unfold come October 31, the UK would most certainly like to have India and its rapidly growing economy in its corner. For India, on the other hand, the stakes are not as high and therefore it is up to Britain to make Brexit – deal or no deal – work for UK-India relations.