COVID-19 hits an Indian solution to a UK problem

COVID-19 hits an Indian solution to a UK problem

Indian student numbers had started registering promising growth only to be struck down by the coronavirus crisis, a conundrum that UK universities must now grapple with.

Indian students have traditionally made up a significant chunk of the UK’s international student population, with universities openly wooing these higher fee-paying customers to balance their books. University education has been billed as Britain’s most successful export, with alarm bells sounding as the numbers from India began registering a drop over the past few years due to unfriendly visa policies.

However, just as British Prime Minister Boris Johnson took charge at Downing Street last year, this trend registered a visible reversal with a record 63 per cent hike in student visas granted to Indians at the end of 2019. The UK’s Office for National Statistics (ONS) reveals that 30,550 Indian students received a Tier 4 Study Visa for the year ending September 2019, up from nearly 18,730 the previous year.

But this uptick proved short-lived as the coronavirus pandemic wreaked havoc with travel restrictions and campus shutdowns, casting doubt on the next academic year.

According to London Economics consultancy’s analysis for the University and College Union (UCU), COVID-19 and the ensuing recession will lead to 111,000 fewer UK and 121,000 fewer international first-year students attending UK universities this year. This will mean a £2.5-billion funding black hole for the universities.

The largest decline in income is the expected loss of £1.51 billion from students outside the European Union (EU), with Chinese and Indian students making up a majority of this international group of students who pay significantly higher tuition fees. 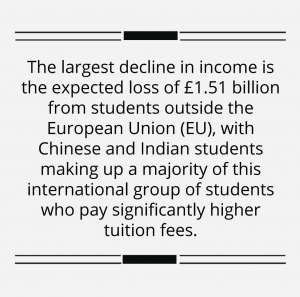 The report finds that universities hit hardest by the falls in fees and grant income are those that cater for significant numbers of international students, with their difficulties having severe knock-on effects for the rest of the sector. It concludes that without government intervention, an estimated 30,000 university jobs are at risk, with a further 32,000 jobs under threat throughout the wider economy.

“This alarming report shows that university staff and students are now staring over the edge of a cliff and desperately need the government to step in and protect the sector,” said UCU general secretary Jo Grady.

“Our world-renowned universities are doing crucial work now as we hunt for a vaccine and will be vital engines for our recovery both nationally and in towns and cities across the UK. It is vital that the government underwrites funding lost from the fall in student numbers. These are unprecedented times and without urgent guarantees, our universities will be greatly damaged at just the time they are needed most,” she said.

The total economic cost to the country from the reduced direct and indirect economic activity generated by universities due to the loss in income is estimated at more than £6 billion.

According to London Economics, all universities would suffer substantial falls in income, with 91 institutions – almost three-quarters – left in a critical financial position where income only just covers expenditure. 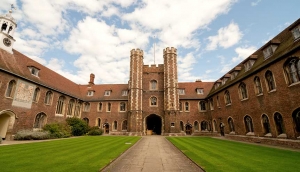 Dr Gavan Conlon, Partner at London Economics, said: “Many institutions have a very considerable exposure to international students, and the pandemic will result in a very substantial loss in enrolments and income.

“Government support of universities is crucial to protect students in the short term and institutional research and teaching capacity in the longer term.”

Alistair Jarvis, chief executive of Universities UK representative group which had tabled a proposal for state support recently, said the government must take “urgent action” to financially support institutions. “Some institutions will be particularly impacted by any combined reduction in international student numbers and increased deferrals,” said Jarvis.

The government’s approach so far has been to encourage universities to access the financial measures already put in place to tackle the fallout of the pandemic. These include a furlough or forced leave scheme for staff who are paid 80 per cent of their wages by the government as well as continuity loan schemes, unveiled by UK Chancellor Rishi Sunak in March. But the Opposition Labour Party has stressed that universities cannot be treated like any other business.

Rebecca Long-Bailey, Labour Shadow Education Secretary, said: “UK universities must be valued as part of the frontline response to the coronavirus pandemic, supplying students to the NHS [National Health Service] and conducting world-class research into the virus.

“Labour is calling on the government to underwrite all Higher Education institutions to secure their future and their role in our economic recovery and acknowledge their contribution to the national effort to fight this pandemic.”