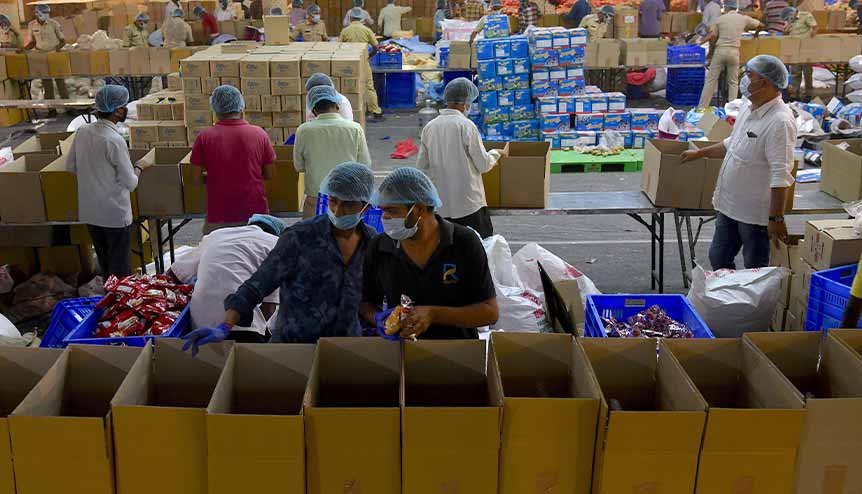 The Indian private sector’s contribution to social good despite stretched bottom lines sets a shining example for the rest of the world.

Adding more muscle to the theory that, ‘if it is India, it is possible,’ global financial authorities have trained their lens on India’s growth chart as the world is coming to grips with containing the COVID-19 pandemic.

Why? Because it is necessary to do so.

India shows its mettle amidst the crisis

Even though the economic outlook appears to be challenging – and this applies to almost every major country – the experts expect New Delhi will make a statement of intent of its solid credentials in a matter of time.

The Asian Development Bank (ADB) has projected India’s growth to slow down to roughly 4 per cent in the current fiscal year due to weak global demand and the country’s efforts to opt for a ‘safety first’ approach while catering to the well-being of its people against the pandemic.

Thereafter, it will be a different story as the government will find the wind in their sails to repair, recover and reignite. Against this scenario, the financial year 2022 should see the registration of at least 6.2 per cent in India’s GDP. Resilience is a hallmark which reveals itself under pressure and India is nothing if not strong.

Government reforms will be the switch that turns on the country’s economic power system – restructuring of personal and corporate taxes, instruments adopted to strengthen agriculture and the rural economy.

Prime Minister Narendra Modi is piloting the country by making his priorities loud and clear – the common goal being to ensure a minimum loss of life; testing, tracing, isolation and quarantine are to be the areas of focus; the crucial necessity of maintaining the supply of essential medical products, availability of raw material for the manufacture of drugs and medical equipment.

The PM also emphasised upon the readiness of dedicated hospital facilities for COVID-19 patients. To boost the number of doctors on call by tapping into a pool of AYUSH physicians, organising online training and utilising para-medical staff, NCC and NSS volunteers.

Awareness has trickled right down to the grassroots and a country in excess of one billion people has risen to the occasion to meet the government halfway. It is a test that quite a few other notable nations have failed to pass, but India with its sense of organised chaos in most times appears to be changing gears quite smoothly.

Corporate India has also endorsed the government’s directives by rallying around to be seen as conscientious corporate citizens and this despite their bottom-lines being subjected to a stiff financial test. It is a lesson that the rest of the world can learn as it has many valuable indicators.

Social innovation strategies are a hallmark approach as top Indian corporations are gearing up to do the right thing – providing a positive impact on society as well as on the bottom lines for businesses; reassuring employees, customers and partners alike against the dangers being posed by the pandemic; and providing support to local communities.

So even while businesses big and small find that their bottom lines are being stretched, it has not deterred them from rallying around as one to lift the spirits of the citizens.

In this context, 50 Indian corporates made a statement of intent to contribute to the social good. Assistance ranged from cash, food, medical facilities, protective equipment, sanitisers, bars of soap and even biscuits.

While Standard Chartered Bank stepped up to commit $987 million (Rs 7,500 crores) of financing for companies that provide goods and services to help the fight against COVID-19, the Escorts Group is providing free food to the poor and needy from the canteens of their headquarters in Faridabad. The teams cook more than 4,000 meals every day and hand them over for distribution free of cost.

The Wipro and Azim Premji Foundation together committed $148 million (Rs 1,125 crores) towards combating the virus outbreak, enabling the dedicated medical and service fraternity fighting the battle in the trenches.

Tata Steel Ltd announced their commitment by instituting health safety measures for its employees and a pledge to donate $65.7 million (Rs 500 crores) for various tasks. Paytm has partnered with more than 300 hotels in 60 cities to offer temporary lodgings for frontline medical professionals. In addition, they chipped in with $65.7 million (Rs 500 crores) to the PM CARES Fund.

The Board of Control for Cricket in India (BCCI), which has had numerous run-ins with the government on various issues in the past, stepped on to the front foot with a commitment of $6.7 million (Rs 51 crores). Tiktok who have earned notoriety for being a platform that beams out eyeball grabbing videos, which range from the sublime to the ridiculous, donated 400,000 hazmat suits and 200,000 masks worth $13 million (Rs 100 crores) to protect doctors and front-line medical staff in India.

Numerous organisations became members of the $13 million (Rs 100 crores) club with their donations. The smaller entities were not to be left behind, showing that they also care, by aiding the greater cause of saving lives and addressing the effects of the virus.

The list of companies that make up India’s corporate fabric stood up to be counted. It is a testimony not just to their sense of commitment to the greater cause of fighting against this pandemic, which is claiming human lives across the globe, but also to their sense of integrity and belief that the government, under the able leadership of Narendra Modi, is instilling into each and every organisation a sense of self-belief, which is being illustrated across the world. India will stand up to be counted yet again, as a major force in the league of nations.