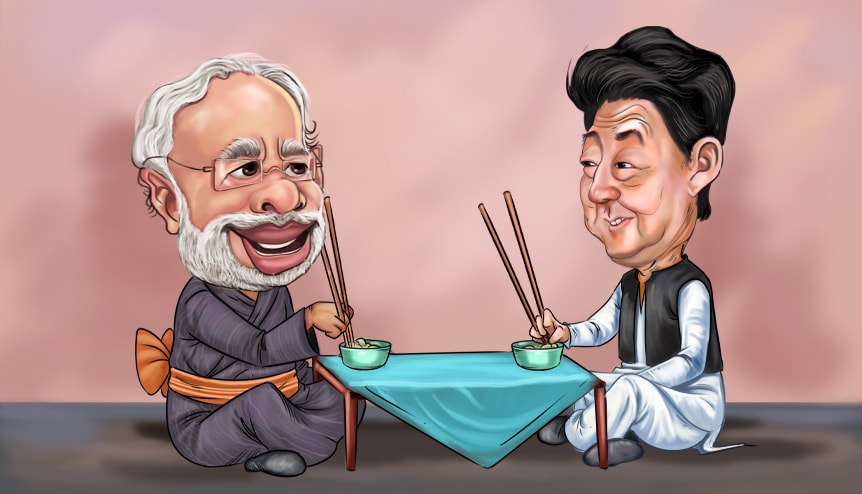 It was Shinzo Abe who, in his first term as Japan’s Prime Minister, had suggested an “Arc of Democracy” from Japan to India as the defining feature of the new global architecture in the 21st century.

Though he didn’t say it in so many words, most geo-political experts interpreted this as some sort of a still-not-fully-defined iteration of a Free World 2.0, fashioned after the Western European liberal democracies that played such as leading role in generating and spreading global prosperity and economic expansion in the half a century and more following the Second World War.

Looking to the future

But that era, which saw the longest period of peace and prosperity for most parts of the world ever experienced in history – yes, a vast majority of the Asian countries included in Abe’s Arc also underwent unprecedented transformation and wealth generation – had a context.

That context was the rise of the Soviet Union, which offered a then much-hailed but ultimately failed alternative model of development under a totalitarian police state that guaranteed some amount of social good in the form of universal education and healthcare.

History seems to be repeating itself. India and Japan, the two shining beacons of democracy in Asia, are coming closer, helped along by the strong personal chemistry that Indian Prime Minister Narendra Modi shares with his Japanese counterpart.

Their fabled personal rapport extends to, by Modi’s own admission, lessons on eating with chopsticks. Two Prime Ministers who can discuss geopolitics and economics, interspersed with tips on how to dine the Japanese way, over a very private dinner is what gives Indo-Japanese ties its special flavour.

The agenda of this, arguably the most important bilateral relationship in Asia, is wide ranging – helping India access and internalise the latest technology and cheap finance to upgrade its infrastructure, from the Delhi-Mumbai Freight Corridor to the Bullet Train to renewable energy and more to helping other Asian and African countries develop their economies and infrastructure.

There is also a geo-political aspect to this relationship: to foster a partnership model of global economic and strategic cooperation in the face of a not-very-well-disguised attempt to create a new global hegemony.

As mentioned above, there are several areas in which the two countries are collaborating closely. Japan is helping India bridge its infrastructure gap and New Delhi and Tokyo are together doing the same in other parts  of Asia and Africa.

But I have to highlight one important missing link: despite the personal chemistry between Modi and Abe, in spite of the obvious convergence of global world views of these two liberal democracies and notwithstanding the hefty political capital both are bringing to the table, the pace of change on the ground can still be improved.

That, in my opinion, is the next step that these two countries must take. The quantum of bilateral trade between India and Japan, at about $20 billion, if piffling compared to the size of their economies – come on, they are the sixth and third largest global economies, after all.

Beyond the election cycle

Both India and Japan will get into election mode very shortly. With five important state elections underway in India, this may already be the case in India and with elections to the Japanese Upper House scheduled for the middle of next year, Japan will soon get there.

But I’m optimistic that these issues will be addressed as all opinion polls suggest Modi will return to power in 2019 and there is every indication that Abe’s party will do well in the polls next year.

The issues involved are, however, more complex and go beyond the personalities of the two leaders.