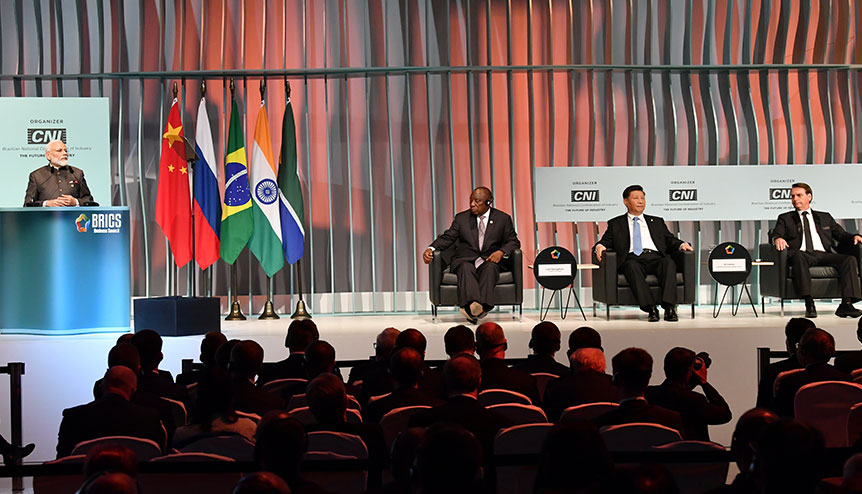 The recent annual BRICS summit gave India the platform to further its ties with China and Brazil and also highlighted India’s growing diplomatic prominence and its significance in BRICS.

The 11th annual BRICS summit in Brazil in mid-November this year was held at a time when multilateralism as a global economic policy is under siege.

Ever since Donald Trump assumed the office of the President of the United States in early 2016, he has railed repeatedly at how multilateral forums have not adequately benefitted the world’s largest economy. The Brexit referendum of 2016 only underscored the need to re-draw traditional multilateral tie-ups as the clouds over the global economy have darkened.

BRICS – Brazil, Russia, India, and China with the addition of South Africa in 2010, was aimed at playing the role of a collective counter to the likes of more heavyweight and mature groups like the NAFTA and EU on matters that pertain global interests. In the thirteen years of existence, the track record has been a mixed bag with some unequivocal major successes matched by some cracks that have emerged from time to time due to the members’ own bilateral misgivings.

This year’s summit was held barely a week after India decided to exit another mammoth in the works free trade agreement, Regional Comprehensive Economic Partnership (RCEP) that comprises China, a fellow BRICS member.  India’s trade deficit with China stands at over $50 billion and the country was insecure about RCEP opening more doors for Chinese goods to come through from third countries. India’s stance did not change despite the fact the Chinese premier Xi Jinping met India’s Prime Minister to assuage some of his concerns just a month ago in Mamallapuram in the southern part of India.

The summit in Brasilia offered a timely check on whether relations between the two Asian giants had been affected by RCEP. That it hadn’t, was clear by the Chinese premier’s invitation to Modi for the third informal meeting in China that showed eagerness on his part to engage more, and not less, with India. The two leaders also further reviewed the ongoing preparations for the celebration of the 70th anniversary of the establishment of diplomatic relations while reiterating the importance of maintaining peace and security in border areas. Views were also exchanged on issues including RCEP, WTO and BRICS.

The maturity of Sino-India relations in multilateral forums like BRICS where neither party allows bilateral misgivings to dominate shows how BRICS as a whole can be the template for multilateralism as a whole. The continual success of BRICS in future would not only offer emerging nations a useful instrument to fight the agenda-setting monopoly of Atlantic powers but also further the cause of a multipolar world.

Besides China, India’s bilateral ties with other members also got a leg up. The most tangible results were with host nation Brazil. The two nations decide to deepen cooperation on biofuels, post-harvest technologies and animal husbandry. India is one of the largest consumers of energy in the world and also the largest importer of crude oil. Brazil is the world’s largest producer and user of ethanol as a transport fuel. There is huge potential for the two to meet somewhere for a win-win for all.

Brazil also decided to allow visa-free entry to Indians and the invitation to President Jair Bolsonaro, the chief guest to India’s Republic Day parade in January 2020, is likely to open up new avenues.

Modi’s meeting with Russian President Vladimir Putin, the fourth in this calendar year did not break any new ground in relations between the two countries as such but built on a solid edifice that has already been built. Post Independence, Russia has been one of India’s oldest and biggest allies. The two nations have already achieved the 2025 target of achieving $25 billion bilateral trade. Some of the agreements included the decision to hold the first bilateral regional forum between Russian Provinces and the Indian States in 2020, to do away with the trade barriers at the regional level and an invitation to Modi to participate in Russia’s Victory Day celebrations next year.

At a more intangible level, the summit highlighted India’s growing diplomatic prominence and its significance in BRICS.  In the motley group of five nations, India has the best relations with the US and its credentials as a liberal democratic society is also unmatched. It lands heft and an equilibrium to the group that would be impossible to achieve otherwise. Without India, BRICS would be reduced to just an illiberal anti-Western coalition. The fragile economies of Brazil and South Africa would not be adequate counters to the expansionist and divisive perceptions shared by Russia and China.

Fully aware of its position, both in strength and weakness, the Brasilia summit showed India’s newfound confidence in dealing with the world. While, on one hand, it can hold its own when required as in the case of RCEP, it doesn’t wish to stop engaging with the world at large. Global diplomacy is an area where India scores over most others and Brasilia just provided more evidence of that.