Affordable bio-pharma innovation that is Made in India 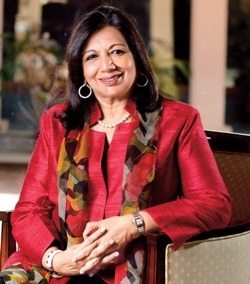 Kiran Mazumdar-Shaw is a consistent presence on definitive global lists as one of the world’s most powerful women. As the Chairman and Managing Director of Biocon Limited, she is a trendsetter in the field of biotechnology in India. Here she takes time out for ‘India Global Business’ to give us an insight into her entrepreneurial drive and India’s own biotech journey.

How has India’s biotech sector grown since you entered as a pioneer in the field?

The Indian biotech industry has grown exponentially since the seventies, when I started Biocon with the objective of manufacturing bio-enzymes which were eco-friendly and helped in replacing industrial chemicals in order to ‘Green the world’.

Over the years, entrepreneurs have used innovative techniques to launch a wide variety of products with applications in healthcare, diagnostics, agriculture, industry etc. Leveraging the power of biotechnology, India has achieved critical mass in recombinant technology based agricultural and pharmaceutical products. India has thus emerged as the world’s largest vaccines producer, global scale insulin manufacturer and the world’s largest supplier of genetically modified cotton. It is estimated that enabling policies can create a favourable business environment capable of generating biotech revenues of $100 billion by 2025.

India’s bio-economy is estimated to be at $35 billion currently, of which Biopharmaceuticals & Diagnostics account for nearly $19 billion. Agricultural biotechnology is worth $ 9 billion, while Bio-services, Industrial BT, Biofuels and Bioinformatics contribute the balance $7 billion.

However, when I started Biocon in late 1970s, it was a total different ball-game since biotechnology as a science was unknown. The success of biotechnology in India then was a distant dream due to challenges associated with funding, availability of talent and long gestation period. For a very long time after I started, the investor community was reluctant to invest in biotech.

The government of India had set up the Department of Biotechnology (DBT) under the Ministry of Science and Technology in 1986 with the aim of encouraging the fledgling Biotech Industry in the country.

Since then, India has emerged as a thriving centre of biotechnology, with Bangalore being the vibrant Biotech hub due to the availability of high-end scientific talent pool and an enabling ecosystem.

Which are some of the geographies Biocon has a strong presence in?

Biocon has been driven by its mission to develop affordable biopharmaceuticals for cancer, diabetes and autoimmune conditions and is committed to take safe, efficacious and affordable drugs to countries challenged with a rising incidence of non-communicable diseases (NCDs). Our commercial footprint now stretches across 120 countries, including emerging markets and key developed markets like Japan, Europe and USA.

We are a leading producer of statins and immunosuppressants, with ‘one in three’ statin pill sold anywhere in the world containing the drug substance made by Biocon. We are also the fourth largest insulins producer, serving the needs of patients across the globe. Our ready-to-use prefilled Insulin Glargine pen launched in Japan last year has been fast gaining market share due to the increasing acceptance among patients and physicians.

What are some of the company’s future global expansion/acquisition plans?

Biocon is among the pioneers in bringing the benefit of high quality, yet affordable insulins and biosimilars to thousands of patients in India. Having developed and launched five biosimilars in India, we are now leveraging that experience to take our robust portfolio of biosimilars spanning human insulin/insulin analogs, monoclonal antibodies and other biologics with an addressable market size of over $60 billion to a global patient population.
We are now preparing to extend the benefits of our ‘highest quality at lowest cost’ affordable healthcare model to address the unmet needs of patient populations in developed markets. For this, we have laid the foundation through strong development capabilities, world-class manufacturing facilities, unblemished track record of quality compliance and strong global and regional partnerships.

With the commercialisation of our new Malaysia facility, designed as Asia’s largest integrated insulins manufacturing plant, we are on track to become one of the world’s largest insulin producers. Our aim is to provide our affordable insulins to ‘one in five’ insulin dependent people with diabetes, over the next few years

Is Trump’s negative rhetoric on drug production in countries like India a concern for the bio-pharma industry?

The Indian pharma industry has for decades contributed significantly to contain and bring down healthcare costs in the US by supplying high-quality yet affordable generic drugs to the country. The US bought $4.74 billion, or over a third of the $12.54 billion worth of drugs exported by India in 2015.

With India now emerging as a leading global supplier of biosimilars, biopharma companies are well-placed to address the unmet need for more affordable versions of biologic products around the world including the US.

If controlling healthcare costs is a priority for the new administration, I believe the Indian pharma industry is already aligned with US President Donald Trump’s vision. Mr Trump would focus on introducing new pricing models that will make expensive innovator drugs more affordable. Considering the fact that India offers a low-cost innovation and manufacturing hub and India-made generics sometimes cost almost one-tenth of branded drugs sold in the US, we are likely to be least affected by the anticipated policy changes.

How far do you feel Biocon is succeeding in your mission to make medicine affordable to the poorest of the world?

Biocon has harnessed the potential of biotechnology to increase affordable access to highly complex biopharmaceuticals like Insulins and Antibodies for the benefit of people with diabetes and patients suffering from cancer.

We entered the diabetes space over a decade back, when the disease was assuming epidemic proportions in India but treatment was by and large inaccessible to most due to the high cost of imported products. We, therefore, developed a recombinant human insulin (rh-Insulin) through an innovative proprietary fermentation technology, which allowed us to make a significant difference to diabetes management in the country and expand access to insulin to a much larger patient pool by making it affordable. We also launched Basalog®, a long-lasting basal Insulin Glargine for Type 1 & Type 2 diabetes, at an affordable price point in 2009.

In our quest to make cancer care affordable, we developed and introduced BIOMAb EGFR® for head and neck cancer patients in 2006. This affordable novel monoclonal antibody therapy developed by Biocon is considered the best available treatment in its class of drugs given its efficacy and superior safety profile in terms of minimal skin toxicity.

At Biocon, we believe that innovation should go hand-in-hand with affordability – it is only when the benefits of research reaches the person on the lowest rung of the economic ladder that it can be considered to deliver true value.

What have been some of your high points as the chief of India’s leading biotech firm?

There have been several high points in this journey, including the Indian government’s decision to confer the Padma Shri and the Padma Bhushan for my pioneering work in biotechnology.

Another milestone that I am proud about is Biocon’s record-setting IPO in 2004. On the day Biocon debuted on the stock market, its market capitalisation soared to $1.11 billion, making it only the second Indian company to cross the $1 billion mark on the first day of listing. Our ability to create long-term value for our shareholders was proven once again when Syngene’s market capitalisation crossed $1 billion within a week of its listing on 11 August 2016.

In between the two market listings, Biocon has made a big difference to the lives of millions of patients suffering from chronic diseases in India by launching two novel biologics – one for cancer and the other for psoriasis – and five biosimilars.

Is India on track to become a globally recognised research and innovation hub in the sector?

India is now ranked among the Top 12 biotech destinations in the world and second in Asia. Already a biotech hotspot, India has all that it takes to become a global biotech innovation hub. Its competitive edge lies in its large, qualified English-speaking scientific talent pool, production costs that are roughly a third of that in the West, a network of reputed research laboratories, state-of-the-art pharmaceutical labs, global scale manufacturing facilities and bio-diversity.

India now needs to create an optimal ecosystem to enable its evolution into the preferred destination for biotech innovation.

On a personal note, what continues to motivate you on a daily basis?

I personally believe that ‘right to health’ should be the fundamental right of every human being. But, unfortunately, that’s not the case. The world over even basic healthcare facilities are a distant dream for the poor and underprivileged.

I am driven by the belief that the pharmaceutical industry has a humanitarian responsibility to provide affordable access to essential drugs for patients who are in need. My vision for our research programmes for treating diabetes and cancer is to bring transformative change in treatment paradigms. I am therefore focused on leveraging affordable innovation to develop high quality cost effective drugs with a ‘Made in India’ label that can change the lives of billions of patients around the world.