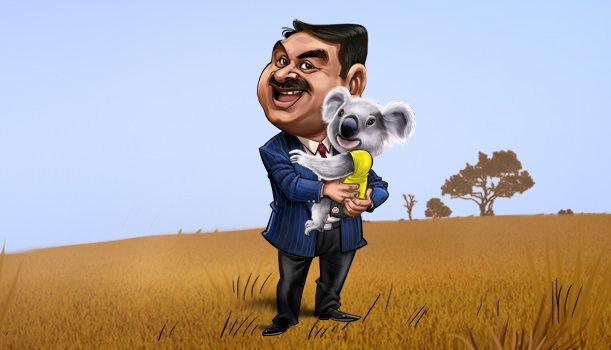 Steadfast support from the public at large is likely to see Adani’s $16.1-billion mining project, India’s largest outbound FDI, through the hurdles.

There appears to be some sort of jinx revolving around projects carrying the twin labels of “largest FDI” and “India.” Remember Dabhol?

The power project by the now bankrupt US company Enron in Maharashtra was the largest inward foreign direct investment (FDI) project at the time. After several false starts, it is finally limping along as the Ratnagiri Power Company, in its latest, public sector avatar.

Then came South Korean steelmaker Posco’s tryst with Indian environmental activists in Odisha. The project, envisaged as the largest FDI project in India, has now been abandoned.

Unlike the two examples above, Gautam Adani’s Carmichael coal mine project in Australia’s Queensland is an outbound FDI deal – India’s largest outbound investment yet. At $16.1 billion, it ranks among the largest greenfield private FDI projects by any country anywhere in the world.

The project involves mining coal in Queensland’s Galilee Basin coal tenements, which are estimated to hold 7.8 billion tonnes of reserves. The greenfield project includes both open cast as well as underground mining. It also involves building a 388-kilometre railway line to connect the mine to Abbot Point. The Adani Group had acquired the coal terminal at Abbot Point port from the Queensland government in 2011 for almost $2 billion on a 99-year lease.

Coal from this mine will be shipped to India to fire Adani’s thermal power plants in this country.

Despite the controversies generated by environmental activists opposed to the project, the Carmichael mine, rail link and port venture has received unstinted support from political parties across the Australian spectrum with the exception – perhaps expected – of the Australian Greens Party.

This is significant as politicians who are expected to know a thing or two about the public mood and parties in democracies, scrupulously avoid decisions that the ordinary voter does not approve.

But in Australia, as in India – and, indeed, in all democracies – small but well-funded and powerful special interest groups often launch high decibel campaigns against projects that they oppose on ideological grounds.

Two of the most vocal supporters are the Queensland state government led by the Labour Party as well as the Australian government, which is run by the Liberal-National coalition. The two parties have set aside their bitter political rivalry to support the project, which is expected to create 10,000 jobs in Australia.

Australian Prime Minister Malcolm Turnbull has gone further and projected that the venture will generate tens of thousands of jobs for Australians at the mine, railway line and the port. On a recent visit to India, he had a private meeting with Adani Group Chairman Gautam Adani and promised that the issues plaguing the project will be resolved.

Then, earlier this year, Annastacia Palaszczuk, the head of the Queensland government, visited Adani’s Mundra Port with eight mayors from her state to show solidarity with Adani’s Carmichael project and to show that the people of Queensland support the venture.

The Government of Queensland declared the venture a “significant project”, thus, setting the stage for it to undergo a comprehensive environment impact assessment. The lengthy and very stringent process – Australian environmental standards are among the strictest in the world – began in 2011 and ended with the Adani Group securing the mining lease in 2016.

The Environment Impact Study (EIS), which is available online, is a massive multi-part document. The executive summary alone is 35 pages long and concludes: “…Based on the findings of the EIS… the project can be undertaken without unacceptable social, environmental and cultural impact. The project also presents a range of opportunities and positive impacts to regional and state economies.”

Despite this, a small group of environmentalists and activists have been opposing the project.

Why activists are opposing the project

They further claim that the mine will generate 4.7 billion tonnes of greenhouse gases and use up more than 0.5 per cent of the global climate budget that has been proposed to limit the rise in global warming to less than 2 degrees Celsius in accordance with the Paris Climate Pact.

The decision of the Government of Queensland to grant Adani a license to use groundwater from the Great Artesian Basin for 60 years for use in the mine is also being used by the activists to fuel fear of water shortages among farmers and ranchers.

The opposing groups have formed a “Stop Adani” alliance and organised protests and roadshows outside banks and the offices of politicians urging them not to fund and, instead, scrap the project.

It isn’t yet clear who is financing these protests but media reports T-shirts, bandanas, caps, socks and earrings with “Stop Adani” emblazoned on them are fairly easily available on many Australian streets.

Videos carrying messages opposing the project, graffiti in public toilets and on streets as well as protestors performing songs asking people to “Stop Adani” have sprung up at various places. Media reports further point out that the protestors have also put up Adani’s pictures on large billboards with words like ‘destruction’ and ‘exploitation’ written over them.

This obviously points to good organisation and deep pockets.

The campaign, despite its few thousand activists – and largely ignored by mainstream politicians – has been suspiciously receiving good coverage in the media. “Coal has become the villain for a lot of Australians and Adani is very much a part of that broad narrative,” a political scientist at the Griffith University in Queensland was quoted by the media as saying.

A short while before the Queensland premier’s show of solidarity with Adani earlier this year, a group of Australian activists visited the Adani headquarters in Ahmedabad. They could not meet Gautam Adani but did submit a letter signed by a group of famous Australians including former Aussie cricket captains, Ian and Greg Chappell and authors Richard Flanagan and Tim Winton, calling upon the Adani Group to “abandon the Adani Group’s proposal to dig the Carmichael coal mine in Queensland’s Galilee Basin”.

“I feel deeply about climate change. Coal is not the future, it is the past. According to experts, the mine is not financially viable. Adani’s track-record in India is not great. This mine should not happen,” Ian Chappell was quoted in the media as telling the correspondent who filed the report. Chappel also felt the project could hamper relations between India and Australia. “It has the propensity to hamper relations.”

The Adani Group issued a media statement in response to the letter pointing out that the project enjoyed popular support among Queenslanders. “We categorically reject such motivated letters of representation by a very small group of 76 misled people,” it said.

Given that the Adani project has already cleared the stringent dictates of the Enviromental Impact Study and has the continuing support from politicians across the Australian political spectrum, it is likely that this hiccup will soon be resolved and the project will soon take off.