Skip to content
A crafty solution to plastic waste

A crafty solution to plastic waste 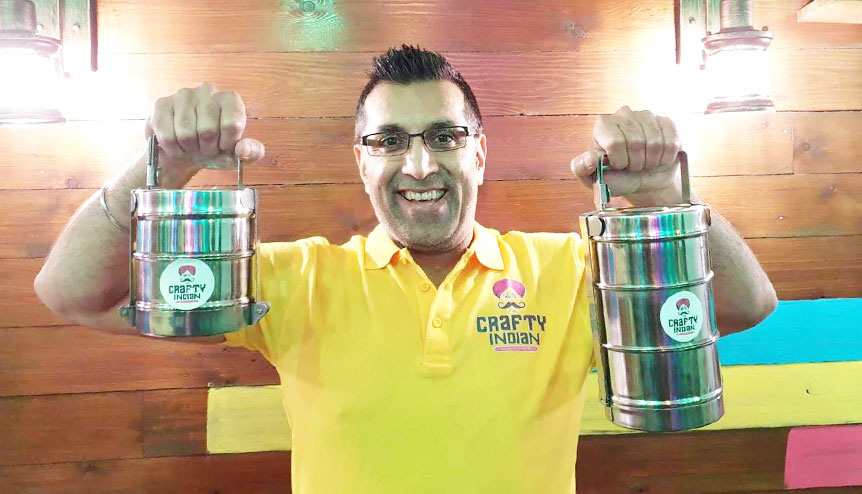 The traditional stainless-steel tiered tiffin boxes, referred to as dabbas in India, have had a makeover in the UK as a sustainable packaging solution by a restaurateur inspired by his father’s decades’ old lunchbox.

A restaurateur who runs The Crafty Indian restaurant in Bradford, northern England, has rolled out an effective food takeaway system inspired by his father’s decades’ old stainless-steel tiffin box, which is not reliant on the more common plastic containers.

Harry Khinda, whose family hails from Punjab before settling in the UK in the 1960s, believes that India and Indians have naturally been reusing and recycling many items as part of their daily lives. This under-appreciated tendency has contributed to at least slowing down the negative impact of single-use plastic from a country with a large population.

And reusable tiffin boxes, or dabbas as they are known in India, is one such practice that he has embraced as his very own recycling mission to fight against unsustainable single-use plastic.

He said: “The inspiration came from our desire to stop using single use plastic containers and carrier bags. Much the same as many people around the world, we have become increasingly aware of the problem associated with plastic use and waste and the negative impact this is having on our planet.

“It comes as no surprise that the answer to this problem has been staring us in the face for many decades. Therefore, the tiffin idea came from my parents who are originally from Punjab.”

Khinda hit upon the concept of offering his customers discounts on the purchase of their order in the tiffins as part of a wider effort to cut down on plastic waste within his business.

“When my family came to the UK in the 1960s, they brought with them steel tiffins which they would use to pack their lunch or dinner in when they went to work in the factories and foundries of post-war northern England. Indeed, we still have my dad’s tiffin which demonstrates the longevity of this product,” he said.

The 48-year-old entrepreneur has invested in the containers for his restaurant in Shipley area of Bradford and found that the response was “tremendous and wide-reaching” among his regulars. They not only get a 10 per cent discount for the purchase of the tiffins, many of them sourced directly from India, but are also able to bring back the containers every time they come in for a new takeaway curry – as Indian food is commonly referred to in the UK.

Khinda, who founded his restaurant in 2008, has seen the popularity of the cuisine catapult over time and is hopeful that the tiffin concept will add a new dimension to its appeal.

“Indian food is massive in the UK and its popularity never seems to decline. Packaging this amazing cuisine using street food methods has helped to re-brand and re-package Indian food in a totally new and refreshing way, which will keep this cuisine at the forefront of dining out scene in the UK,” he said.

Khinda now hopes that other restaurants will also get inspired and follow a similar trend, which he feels would go a long way in cutting down the daily use of plastics.

As part of wider sustainability efforts, he has also banned the use of cling film in his kitchen and tries to ensure the meat served is locally sourced rather than shipped from miles away to cut down on the carbon footprint.

“It’s such an important topic at the minute and a lot of people are ethically concerned,” he said.