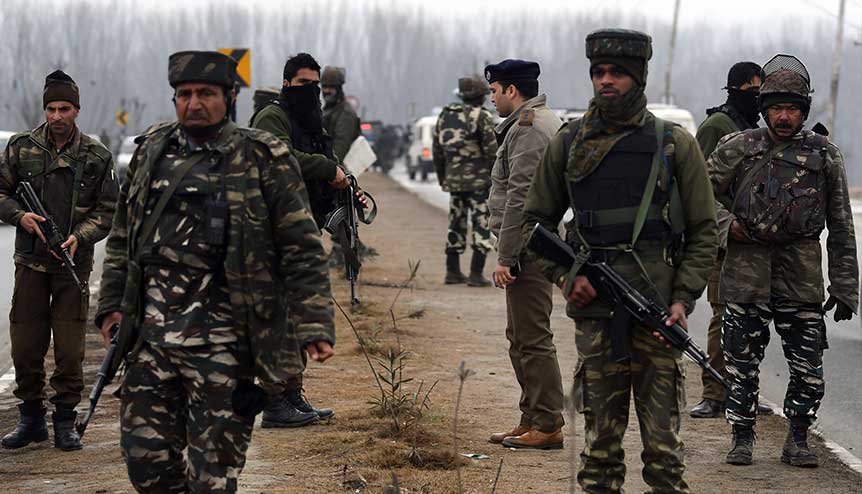 From table-top exercise among Quad countries to setting up a training centre in India to a stinging statement by its Joint Working Group last week, counter-terror has emerged as a bold area of strategic convergence between New Delhi and Washington.

The list of cross-border terror attacks and terror-related proxies seems unending and unsurmountable – but that’s what US-India Counter Terrorism Joint Working Group has openly called out in a statement last week, marking a new and bold area of strategic convergence between the two nations against the backdrop of shared misgivings about China’s growing aggressiveness across much of Asia and its growing patronization of Pakistan and Iran.

Shared values lie at the core of warm Indo-US ties

In pursuit of the Indo-US pharma trail

We welcome the conclusion of the 17th US-India Counterterrorism (CT) Joint Working Group. CT cooperation is a key pillar of the #USIndia Comprehensive Global Strategic Partnership & we'll continue to work w/India to combat terrorism in all its forms. https://t.co/OmpmxjNYGa 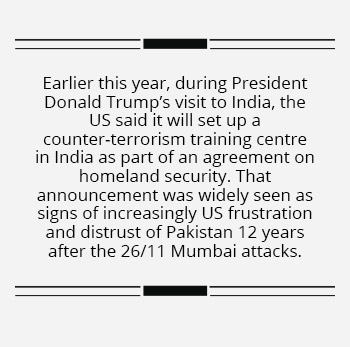 Of course, this is not the first such dialogue between the stakeholders of the US-India Counter Terrorism Joint Working Group – it’s the seventeenth, and was led by Mahaveer Singhvi, Joint Secretary for Counter Terrorism, Ministry of External Affairs of India and Ambassador Nathan A. Sales, US State Department Coordinator for Counterterrorism. But the joint statement at the end of the dialogue was unusual and is bound to trigger a far-reaching conversation on counterterrorism cooperation: “Both sides denounced use of terrorist proxies and strongly condemned cross-border terrorism in all its forms. They exchanged views on threats posed by UN-sanctioned terrorist entities and emphasized the need for concerted action against all terrorist networks, including al-Qa’ida, ISIS/Daesh, Lashkar e-Tayyiba(LeT), Jaish-e-Mohammad (JeM), and Hizb-ulMujahideen.

The two sides also shared information about their priorities and procedures for pursuing sanctions and designations against terrorist groups and individuals, particularly in light of recent legislative changes in India. The two sides underlined the urgent need for Pakistan to take immediate, sustained, and irreversible action to ensure that no territory under its control is used for terrorist attacks, and to expeditiously bring to justice the perpetrators of such attacks, including 26/11 Mumbai and Pathankot. The US reiterated its support for the people and government of India in the fight against terrorism.”

India is a critical market for Lockheed Martin

Trade, defence deals to be focus of Trump’s visit 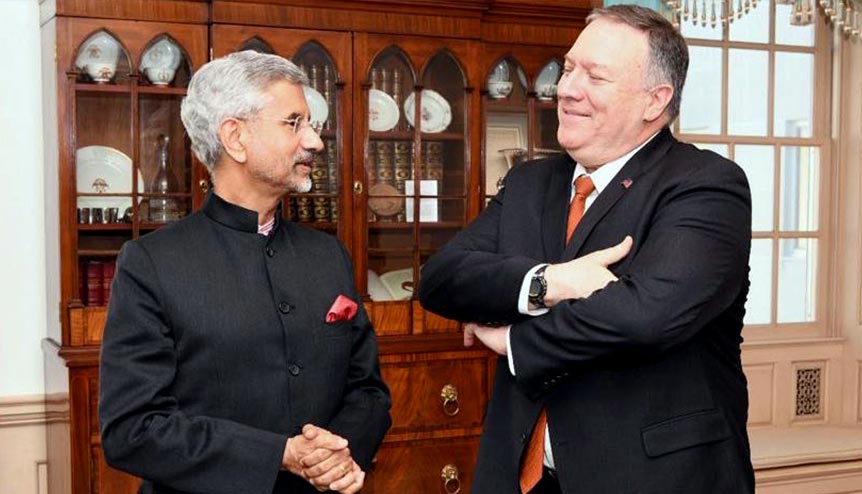 Closely aligned. External Affairs Minister S.Jaishankar with US Secretary of State Mike Pompeo. The latter has publicly condemned China’s aggressive actions against India along the LAC on behalf of his government.

That last line is itself a long way off the US disposition toward India nearly 50 years back in the early 1970s, when the combination of Richard Nixon and Henry Kissinger teamed up to work on a clandestine outreach to China that involved placating Pakistan as an interlocutor. Even though the ploy to isolate India as what was then East Pakistan fought the battle of liberation with New Delhi’s help in 1971 spectacularly backfired on the US administration, Kissinger and Nixon persisted in the outreach to China. Compare that with the recent warning from US Secretary of State Mike Pompeo to China for its “incredibly aggressive” actions along the Himalayan border and elsewhere, and the deployment of the nuclear-powered aircraft carrier USS Nimitz as part of a contingent of US warships that carried out a naval exercise with their Indian counterparts near the Andaman and Nicobar Islands in the Bay of Bengal in July this year. 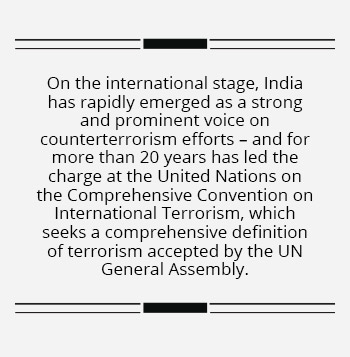 Such a close-knit cooperation is yet another indicator of the convergence of ideas between the US and India on security issues, and has been made possible due to a variety of factors. On the international stage, India has rapidly emerged as a strong and prominent voice on counterterrorism efforts – and for more than 20 years has led the charge at the United Nations on the Comprehensive Convention on International Terrorism, which seeks a comprehensive definition of terrorism accepted by the UN General Assembly. Significantly, India is also a member of the Financial Action Task Force (FATF), the Eurasian Group on Combatting Money Laundering and Financing of Terrorism, and the Asia-Pacific Group on Money Laundering – and last year India provided valuable inputs to the US authorities in their effort to put Pakistan on the FATF grey-list for “outstanding counterterrorism deficiencies”.

The centrality of American bipartisanship for US-India defence ties 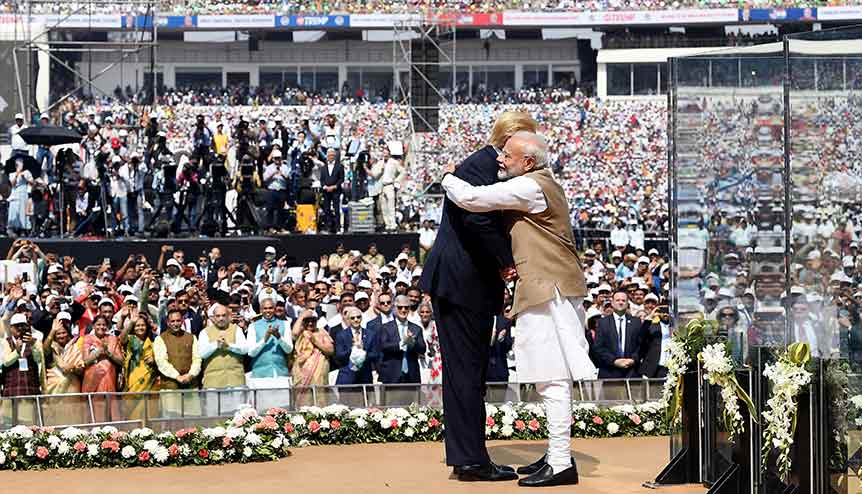 Indian prime minister Narendra Modi and US president Donald Trump are closely aligned. With collaboration on counter-terrorism activities India and the US will have the ability to share threat assessments.

Earlier this year, during President Donald Trump’s visit to India, the US said it will set up a counter-terrorism training centre in India as part of an agreement on homeland security. That announcement was widely seen as signs of increasingly US frustration and distrust of Pakistan 12 years after the 26/11 Mumbai attacks – during which it failed to take any meaningful action either against its masterminds or operatives.

“With the speed and veracity that threats – from lone wolf attacks to full blown state-sponsored terrorist actions – come into the purview of law enforcement and intelligence agencies, it is critical for information to be shared in real time. More so, the same must be done in a secure manner in order to protect the general public. The key advantage the Indian and American governments will have over those wishing to do ill to their citizens, is the ability to share threat assessments – from particular individuals, before an untoward incident occurs,” said Douglas Smith, a former Assistant Secretary for the Private Sector at the US Department of Homeland Security, and currently Managing Director at Kent Strategies. 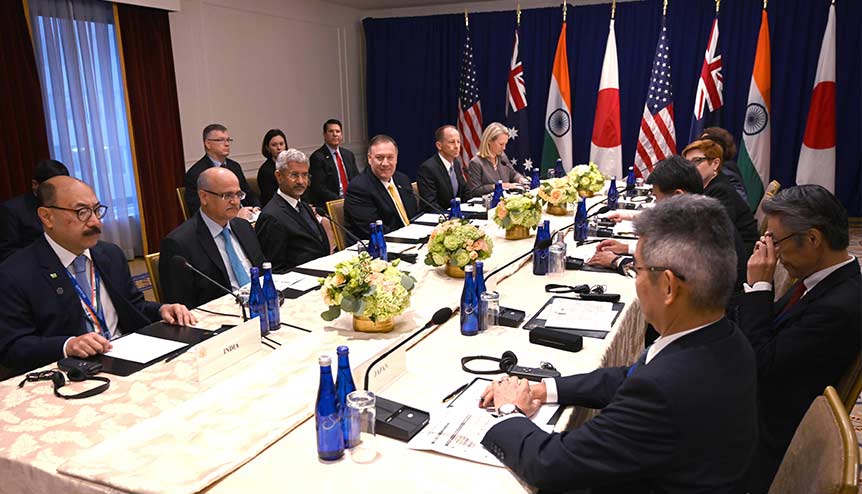 External Affairs Minister S Jaishankar at a Quad Foreign ministers meeting. Countries are aligning to assess and validate counter-terror mechanisms against a range of existing and emerging terrorist threats at both the regional and global levels.

Efforts to bolster join counter-terror initiatives have also come from the grouping of QUAD, with India hosting the first counter-terrorism table-top exercise (CT-TTX) among the Quad countries in New Delhi in November last year. While the exercise was hosted by India’s National Investigation Agency, its reported aim was to assess and validate counter-terror mechanisms against a range of existing and emerging terrorist threats at both the regional and global levels, along with sharing best practices in terms of preparedness, mitigation strategies and to expand the areas for strengthened cooperation among India and US and the other Quad countries. 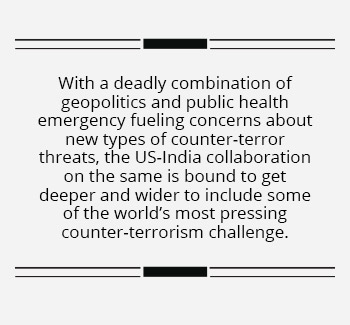 With a deadly combination of geopolitics and public health emergency fueling concerns about new types of counter-terror threats, the US-India collaboration on the same is bound to get deeper and wider to include some of the world’s most pressing counter-terrorism challenges – such as combating the financing and operations of terrorist organizations, countering radicalization and terrorist use of the internet, cross-border movement of terrorists and prosecuting, rehabilitating, and reintegrating returning terrorist fighters and family members.

With a concerted effort between the two countries, hopefully the future will be a world bereft of Al Qaida, ISIS, Lashkar e-Tayyiba, Jaish-e-Mohammad as well as Mumbai, Pathankot and Pulwama.