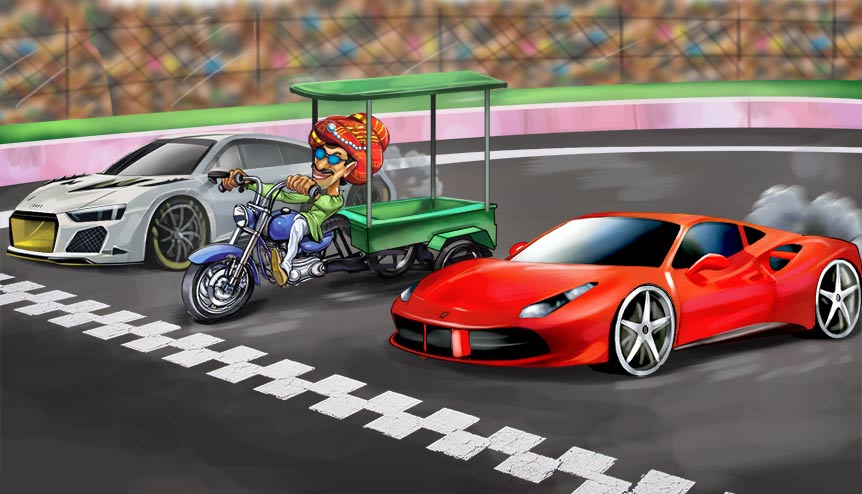 With an intrinsic focus on frugal engineering, India has shown the world for decades how to make a profound transformation and impact on society and environment. Companies such as Google, PepsiCo, Siemens and Facebook have all followed the lead, and now more investments are pouring in to support this uniquely Indian idea.

The sleepy hamlet of Mhaswad deep in the heart of Maharashtra boasts a motley mix of professions typical of rural India: working in the fields, poultry businesses, local millers and blacksmiths, street vendors and micro farmers.

With people used to handling things the traditional way it’s been done through generations, it struck everyone as odd when the village welder Kantabai Salunke came up with an unusual request – to open a bank account that will allow her to save some money every day to buy a tarpaulin sheet to shelter her children during the upcoming monsoon.

Related stories: Indian innovation leads the fight against the pandemic

India, Israel, and the UK: A new horizon for innovation

It was a bold idea in Mhaswad – but there was just one problem.

Kantabai wanted to save about Rs 10 every day – equivalent of less than $0.15 today – and the nearest bank was in no mood to allow a new account with such meagre money. 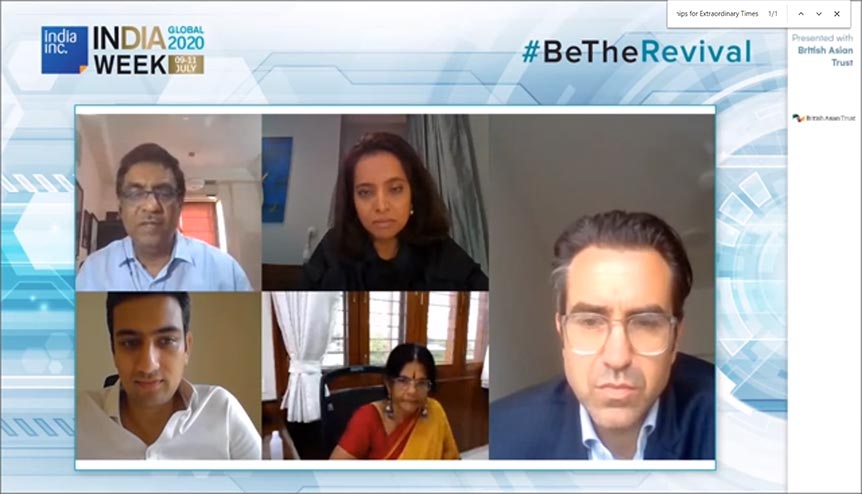 Despite multiple representations to the bank, it all looked like a losing battle to Kantabai – until help arrived from the most unexpected quarters.

Chetna Gala Sinha was new to Mhaswad, having arrived at the village from Mumbai after falling in love and marrying local activist-farmer Vijay Sinha. But she decided to push back on behalf of Kantabai.

“If banks are refusing to open accounts, then I thought why not start a bank… Most of the women were street vendors. Many were doing dairy farming, there were those selling bangles. They couldn’t read and write,” Chetna recalled in a TedTalk in 2018.

So she applied for a banking licence – but the first attempt failed since none of Chetna’s co-applicants could read or write.

Undeterred, the group of women began literacy classes, learnt mathematics and reapplied after six months. This time, the licence for the new bank came through – and Kantabai and countless others like her were able to finally save their small sums to secure a better future. 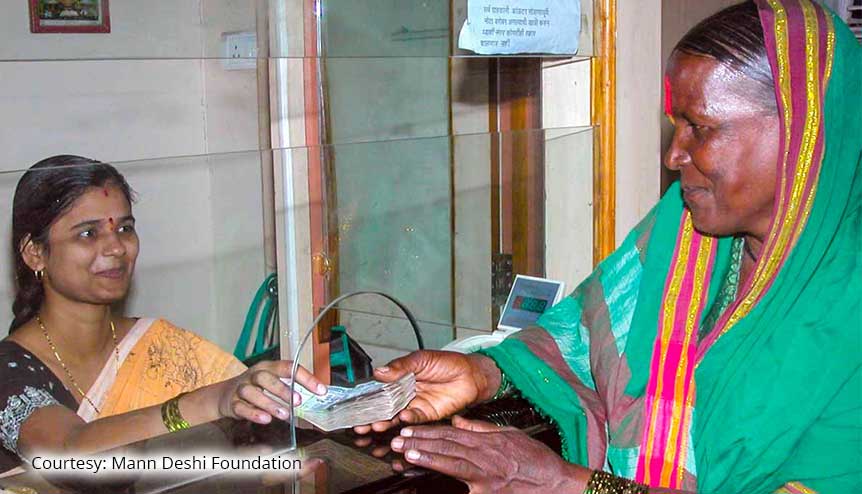 The Mann Deshi Bank and Foundation supports more than half a million rural women micro-entrepreneurs around Maharashtra.

Today, Mann Deshi Bank – India’s first bank for and by rural women – has more than 100,000 account holders and has loaned more than $50 million to support women micro-entrepreneurs. The journey of social activism blended with entrepreneurship that started with a village bank has taken Chetna places around the world – she chaired the 48th Annual Meeting of the World Economic Forum in Davos in 2018, with the likes of former IMF chief Christine Lagarde and IBM chief executive Ginni Rometty; she was awarded the Nari Shakti Puraskar, India’s highest civilian award for women; and she still lives in Mhaswad, where her foundation supports more than half a million rural women micro-entrepreneurs around the state. 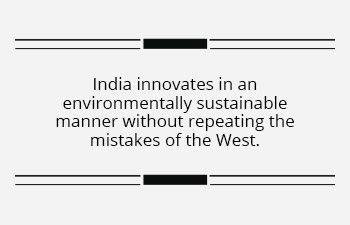 But more than a successful activist, micro-finance banker and an economist, Chetna typifies the new class of disruptive social entrepreneurs who are breaking barriers and redefining the future – the ultimate embodiment of the deep-rooted culture of frugal innovation that pervades Indian society.

According to Navi Radjou and Jaideep Prabhu, authors of “Do Better With Less: Frugal Innovation for Sustainable Growth,” India is in a unique position to harness trends like micro-credit banks, maker movement and sharing and circular economy.But due to its limited natural resources and growing population, India innovates in an environmentally sustainable manner without repeating the mistakes of the West – where the flurry of innovation and homegrown start-ups has most often extracted a huge social cost in the long run. 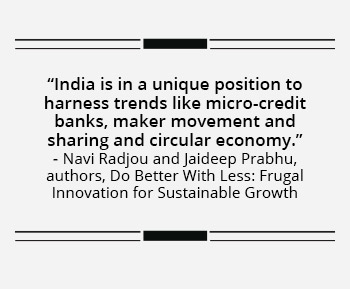 Ironically, India’s frugal innovators in most cases are successful products of their own limitations – restricted by poverty, poor infrastructure and public apathy for decades, they have soared beyond ground reality to find solutions that not only work but also last in a sustainable way. 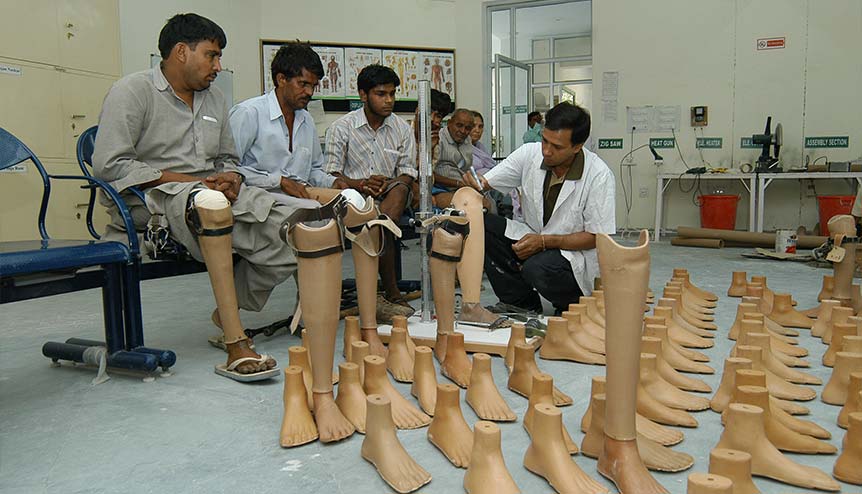 View of the Jaipur Foot and Calipers, World’s largest prosthetic limb fitting society. The Jaipur Foot is an example of India’s most historic and iconic frugal innovation success.

Perhaps India’s most historic and iconic frugal innovation success is the prosthetic limb popularly known as the “Jaipur Foot.” Apart from the fact that its components are all sustainable (wooden interior and sponge-rubber protective exterior), have a look at an average price comparison: A prosthetic limb in the US costs between $5,000 – $15,000, and in developing countries between $200 – $1,500.

By contrast, the Jaipur Foot costs about $20.

But the story of frugal innovation doesn’t just end there. Thanks to the materials used, it can be constructed in less than three hours and fitting it can take just a day. Then comes a highly effective service delivery model: employing a hub-and-spoke delivery model, the Foot reaches patients in India through 22 nationwide centres and more than 50 mobile camps in remote rural areas. 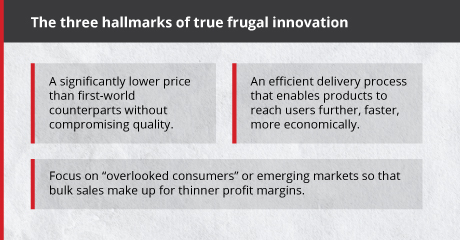 Similar successful examples of frugal engineering abound in the outskirts of Jaipur, or for that matter the bylanes of every Indian city and village.

Rural Rajasthan is full of the improvised vehicle that’s literally called Jugaad - a quadricycle recycled out of wooden planks and old car parts and powered by motorbikes or diesel engines originally intended for agricultural irrigation pumps. Even though these vehicles cannot go any faster than about 60km per hour and are mostly not street legal, they manage to carry more than 20 people and have quickly become one of the most cost-effective transportation solutions for rural Indians.

“Though many in India would argue that Jugaad is not just frugal or flexible innovation but sometimes also a makeshift workaround or ‘bandage’ solution and not true innovation, this term seems to have stuck and is finding acceptance in Western business jargon as well – even for those who do not attach a romantic or positive connotation to jugaad,” said Radjou and Prabhu. “Jugaad thrives in environments which are harsh, politically and economically unstable, culturally diverse, with poor infrastructure and inadequate access to finance and skilled human resources,” they said. 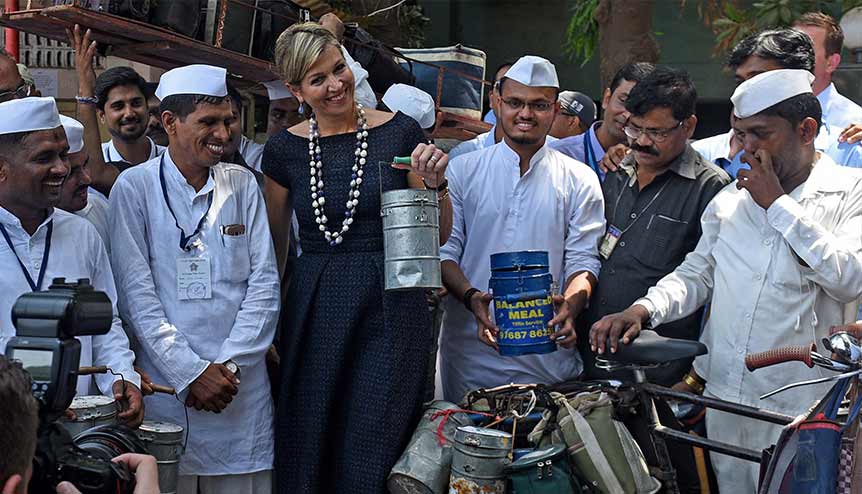 Queen Maxima of the Netherlands poses with Dabbawalas, also known as tiffin carriers, during their meeting in Mumbai, India. The Dabbawallas are recognised worldwide for using innovative thinking to solve complex logistics and management problems.

While this is generally true, there are many who defy the pigeonhole.

Aniish Shah is a proud Mumbaikar who gave up a lucrative corporate career in 2016 to pursue his passion – farming.

“I had worked in marketing and sales and was earning well, but after a point, I realised that I was doing the same thing in different organisations. I was living out of a suitcase because of all the travelling, and I was tired of the rat-race. So I decided to pursue what I love,” Shah told YourStory. 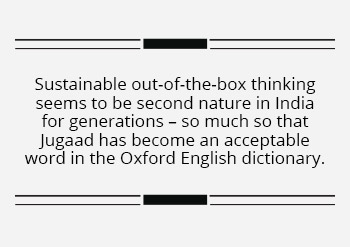 Instead, Shah is now an organic farmer-entrepreneur, who grows close to 20 sustainable crops on 30 acres and runs a farm-to-table venture called Earth Harvests where customers are sent weekly crates of fresh organic and natural produce such as groundnuts, wheat, turmeric, black-eyed beans, corn, pepper, mangoes and cashews. His farm specialty: he uses ingenious techniques of biodynamic farming, a form of alternative and natural farming without any chemicals.

Whether it is Shah, the dabbawalas of Mumbai or the enterprising Sikh shopkeeper in New Delhi who uses a washing machine to churn his lassi, sustainable out-of-the-box thinking seems to be second nature in India for generations – so much so that Jugaad has become an acceptable word in the Oxford English dictionary and India has recognised the word as the abbreviation of “Justified Guideline to Achieve the Desired State”. 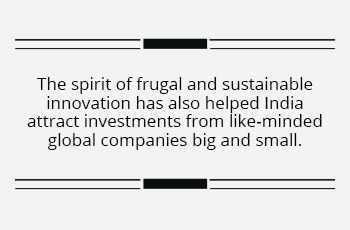 Along with global appreciation, the spirit of frugal and sustainable innovation has also helped India attract investments from like-minded global companies big and small.

Malaysian health giant Columbia Asia, for instance, has set up no-frills hospitals using standardised designs across 11 Indian cities, connected like spokes to a hub that can handle more complex ailments. While services carry a relatively modest price tag, by targeting urban dwellers with an annual income between $10,000-$20,000, the group hopes to bag those customers not in the sights of fancier chains. Similarly, Mumbai-based medical devices firm Biosense has secured $500,000 in seed funding from multiple global investors to produce a device that eliminate the need to draw blood to screen for anaemia and blood-draw-based device to screen for diabetes.

While the model of frugal improvisation is not totally unique to India – China’s zizhu chuangxin and France’s Systeme Debrouillard are touted as close siblings and Benjamin Franklin and the Wright brothers as practitioners of the same school of thought – the complex matrix of resource-scarcity, cost-effectiveness and business sustainability makes Jugaad a typical synonym for India.

In the aftermath of Covid-19, as companies, businesses and governments seek a way out of the economic wasteland, it’s a matter of time before Jugaad becomes a state of mind around the world more than a product on the street.