Why India is ready to lead the post-Covid world

Why India is ready to lead the post-Covid world 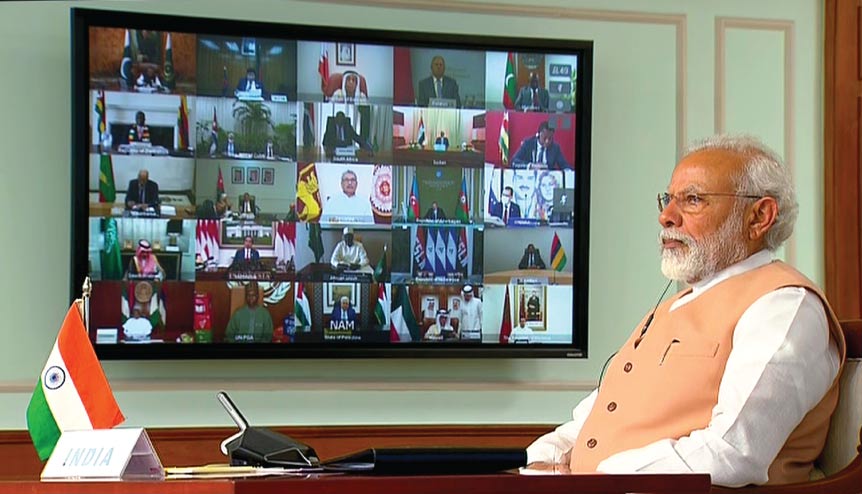 The Covid-19 crisis has laid bare the terrible inequality of global leadership. India can change this by creating a new paradigm of multilateral cooperation, as demonstrated by its participation at NAM summit and rushing medical supplies to 123 countries.

“We can no longer take it for granted that our multilateral institutions are strong enough to cope with all global challenges.”

That was the concern of then UN Secretary-General Kofi Annan, way back in September 2003.

Nearly two decades later, Annan’s fears have not only come true, the current Covid-19 crisis has also laid bare the terrible inequality of global leadership in a multilateral world order, with the world’s most affluent countries preoccupied with battling the pandemic and its economic aftermath on the domestic front rather than fulfilling their global responsibility.

Related stories: COVID-19 could spur a revival of the SAARC

India, US bolster engagement on COVID-19

It is in this void of leadership that India has astutely stepped in – with Prime Minister Narendra Modi’s recent participation at the Non-Aligned Movement (NAM) Summit, convening a virtual SAARC Summit and setting up an Emergency Covid-19 fund with new Delhi pledging a $10-million contribution being the primary driving forces.

Providing medicine to the world 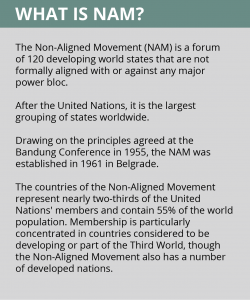 Consider this: ever since the pandemic started, India has rushed medical and essential food supplies to more than 123 countries, including 59 members of NAM. Much of the hydroxychloroquine and paracetamol supplied to these countries has been a free gift from the Indian government. It has mobilised forces for disaster management drills. It has also organised digital trainings to share its medical expertise with other affected countries and has actively partnered global efforts to develop remedies and vaccines against the new coronavirus.

It has had a special focus on Africa, a continent wracked by outbreaks such as cholera, TB, Malaria and Ebola, apart from the pandemic. From the Prime Minister reaching out to the African Union chairman and several heads of governments through phone External Affairs Minister S. Jaishankar reassuring his counterparts in Africa about New Delhi’s commitment to the region and ensuring critical medical supplies, India has succinctly leveraged its unique advantages in the medical field in the service of humanity and stood by the international community in this hour of global crisis. 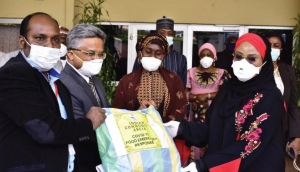 The Indian diaspora as ambassadors of hope

The Indian diaspora across the world has also pitched in with equal vigour, positioning themselves as ambassadors of hope at a time when every country and community is caught in the crisis.

The resultant credibility and goodwill has once again demonstrated why, in the words of NR Narayana Murthy, “India sits at the high table in most major multilateral deliberations and what India says is heard with attention and seriousness”.

On the other hand, as Modi put it at the NAM summit: “Even as the world fights Covid-19, some people are busy spreading other deadly viruses such as terrorism, fake news and doctored videos to divide communities and countries.” 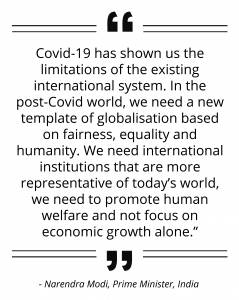 Being part of the solution

As world powers abdicate their responsibilities at a time of grave crisis or even aggravate the crisis itself, India has chosen to be part of the solution by leading global efforts not only to combat the pandemic but also to salvage multilateral leadership. “During this crisis, we have shown how democracy, discipline and decisiveness can come together to create a genuine people’s movement… India’s civilization sees the whole world as one family. As we care for our own citizens, we are also extending help to other countries,” Modi said in his intervention at the NAM summit.

By deciding to be a part of the summit for the first time as the Prime Minister, Modi also sent out a powerful message that resonates with most of the world: the non-aligned movement has the potential to shake off its antiquated Nehruvian residue to become a truly cooperative force for a multilateral world.

While India was a founder member of the movement in 1961, the cluster of 120 developing countries spread across Asia, Africa and Arab world has not been a key part of New Delhi’s recent focus. That’s been a blessing in disguise since in the intervening period India has managed to develop robust ties with key NAM member countries – strengthening their bilateral relations and recalibrating diplomatic equations in many cases.

The post-Covid-19 world order will be radically different, and India is ready for a major leadership role in it. But India’s leadership must be supported and reciprocated by key reforms of multilateral institutions that the Modi government has been seeking for several years – namely an overhaul of the United Nations and a permanent seat at the UN Security Council.

As Emmanuel Lenain, the French Ambassador to India, said in a recent post: “We will keep fighting for a UN system that is more representative of today’s world, starting with the reform of the UN Security Council’s composition so that G4 countries, including India, become permanent members”. Those sentiments have been echoed by a multitude of countries and leaders – and the time has come to enact those changes or fall back to the global leadership nightmare that Annan envisioned in 2003.

As outlined by Modi, the post-COVID era demands a new template of globalization based on fairness, equality, and humanity.

India is certainly ready to prepare that template and say NAMOSTE to the world.