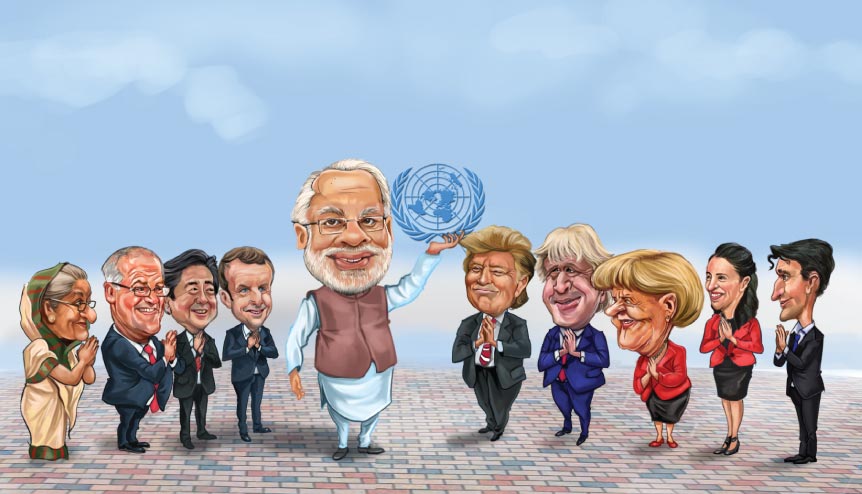 Amid chaotic geopolitics and isolationist behaviour from major world powers, India, with its decisive leadership and commitment to humanitarian initiatives, has demonstrated that it is clearly ready for a permanent role at the UN Security Council (UNSC) – the highest multilateral platform. This five-part special report establishes why, how and what needs to happen to enable it.

The year 1545 was a pivotal moment in the history of Mexico’s flourishing Aztec nation. This was the year when the Aztec people started coming down with a strange high fever, headaches and bleeding from the eyes, mouth and nose. Death followed in three days. 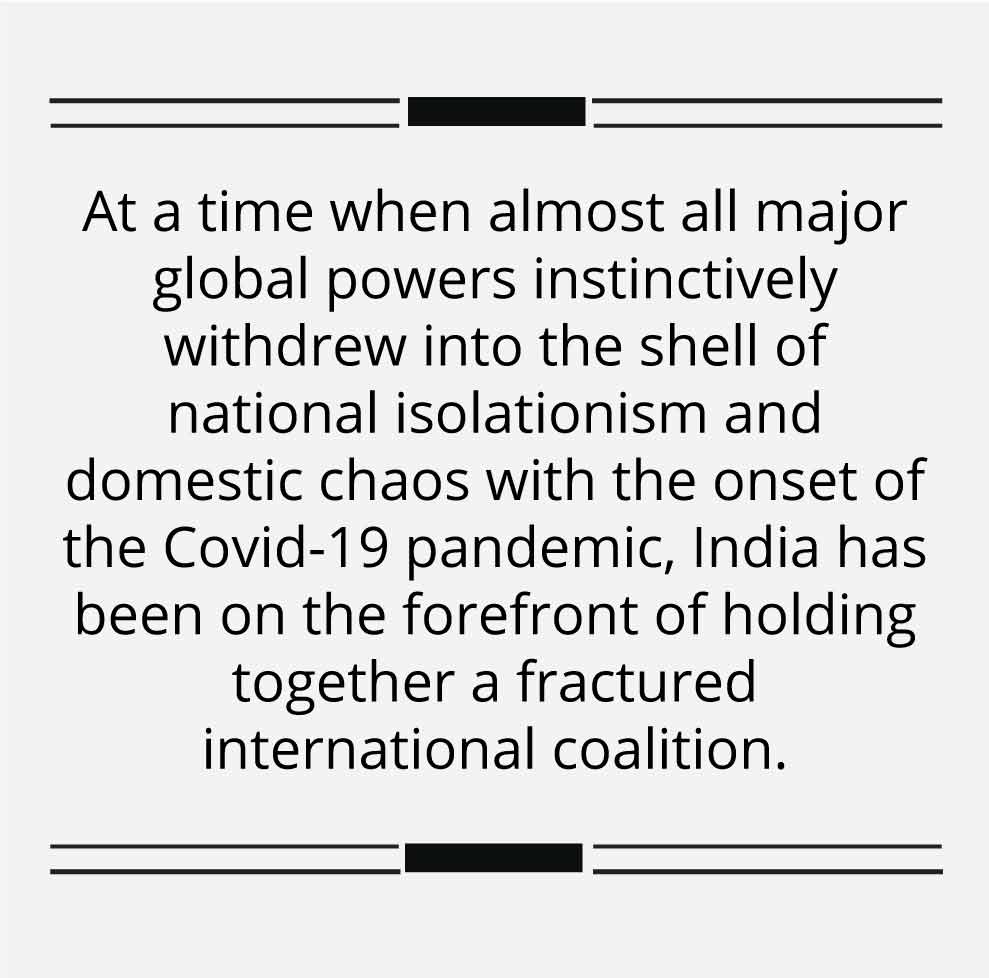 Within five years, nearly 15 million people or about 80 per cent of the Aztec population were gone – wiped out in an epidemic the locals named “cocoliztli” or pestilence in the Nahuatl language. While it’s now known that the strange and deadly illness was a type of typhoid-like enteric fever, it took an invisible germ to dramatically alter the course of history for the Aztecs and change the fate of America.

The outbreak is considered one of the deadliest epidemics in human history, ranked in its lethal outcome close to the Black Death that killed 25 million people in western Europe in the 14th century.

Whether it’s a plague, typhoid or the coronavirus, the unexpected arrival of a global pandemic has been proven to dramatically reshape global geopolitics and transform the balance of power throughout history – and the current Covid-19 pandemic fulfils that criteria perfectly not only with its unrelenting reach but also its devastating economic impact. 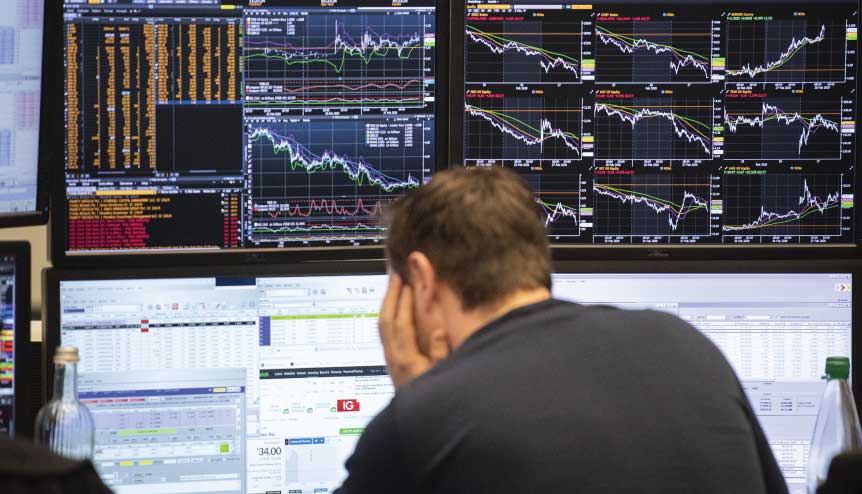 But one country has emerged as a bedrock of global stability and responsibility amid the shifting sands of global power play and institutional abdication that started with the outbreak of the virus in China’s Wuhan. Whether in rushing aid and medicines to far-flung corners of the world, in mounting the world’s biggest peaceful civilian evacuation exercise or in simply spreading the contactless culture of greetings through its millennia-old Namaste, India in the past four months has been an embodiment of the adage that with great power lies great responsibility.

At a time when almost all major global powers instinctively withdrew into the shell of national isolationism and domestic chaos with the onset of the Covid-19 pandemic, India has been on the forefront of holding together a fractured international coalition during a time of unprecedented crisis, heralding the arrival of a new world order with far-reaching implications in geopolitics as well as economics and investments.

The politics of a pandemic

Let us travel back in time to the age of the Aztecs for a moment. This was a time when European colonisers spread diseases as they ventured into the new world, bringing germs that the local populations had never encountered and lacked immunity against. The result was instant decimation of local populace. What was mostly an unintended consequence back in the Middle Ages has now turned into a strategic choice – China’s utterly criminal behaviour in hushing up the contours of a global pandemic in January, while it was still mostly limited to the country – has exposed its blatant irresponsibility in the global community and permanently damaged its credentials as a dependable world power.

Despite fully knowing the consequences of not alerting the international community, Beijing allowed the virus to spread silently and rapidly to all corners of an interconnected world, choosing instead to silence the voices of scientific reason within the country. 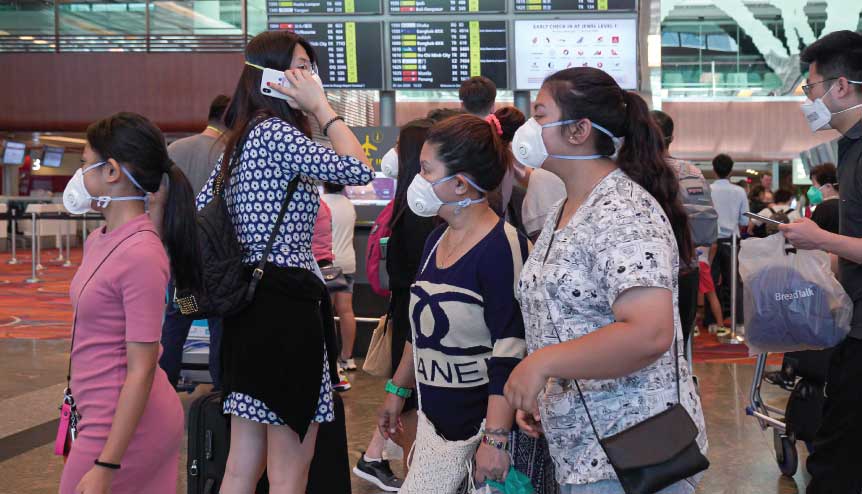 As the virus spread with unexpected contagion and virulence around the world, most other major global players and advanced economies were caught unawares and have been preoccupied in dealing with the domestic catastrophe that has followed – battling at once the pandemics of healthcare, economic ruin and unemployment.

The US is now left tackling a movement against racial inequality, apart from being the world’s topmost country by far in Covid-19 cases. The UK has managed to initiate a global coalition in the hunt for a Covid-19 vaccine, but its own cases of infections continue to rise amid political divisions – rendering such initiatives mostly stillborn. The European Union is in the throes of deep dilemma over how to handle the aftermath of the pandemic and how to reopen their economies in a safe and sustainable manner – with deep disagreements within Germany, France and the rest of the bloc. Russia and Brazil meanwhile remain fully focused on the surge in domestic cases and the resultant stress on national infrastructure. And the World Health Organisation (WHO) – which remains in oversight of the pandemic – has also not done its reputation any favour by constantly reviewing its own findings and issuing contradictory statements. 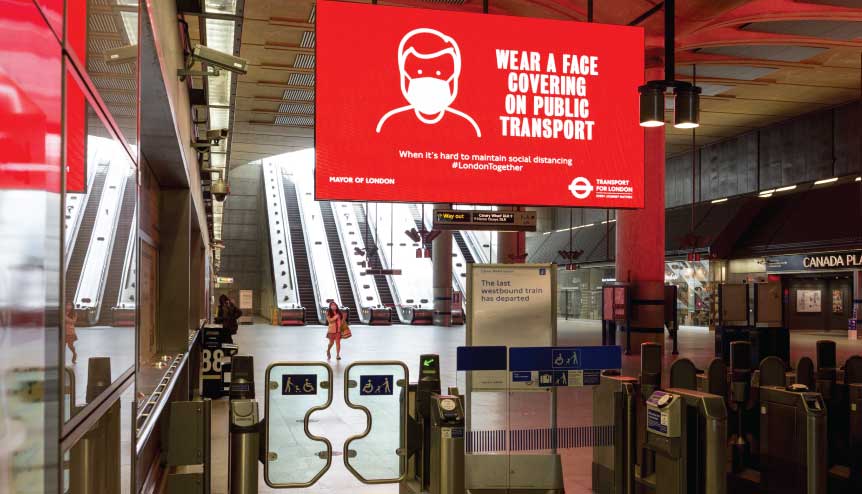 In many ways, the current crisis has exposed the inadequacies of a world order dominated by West-centric policies and a global value chain that depends on China for supplying even the smallest of cogs in the wheel. With its lack of preparedness and foresight, the contemporary world order was perhaps ready to counter a political or military crisis – but certainly not a health pandemic.

Amid this gloom and chaos, India has taken command of the global seat of leadership, carefully balancing its strategic and security needs with helping countries in need and propagating the soft power exuding from the land of Mahatma Gandhi. 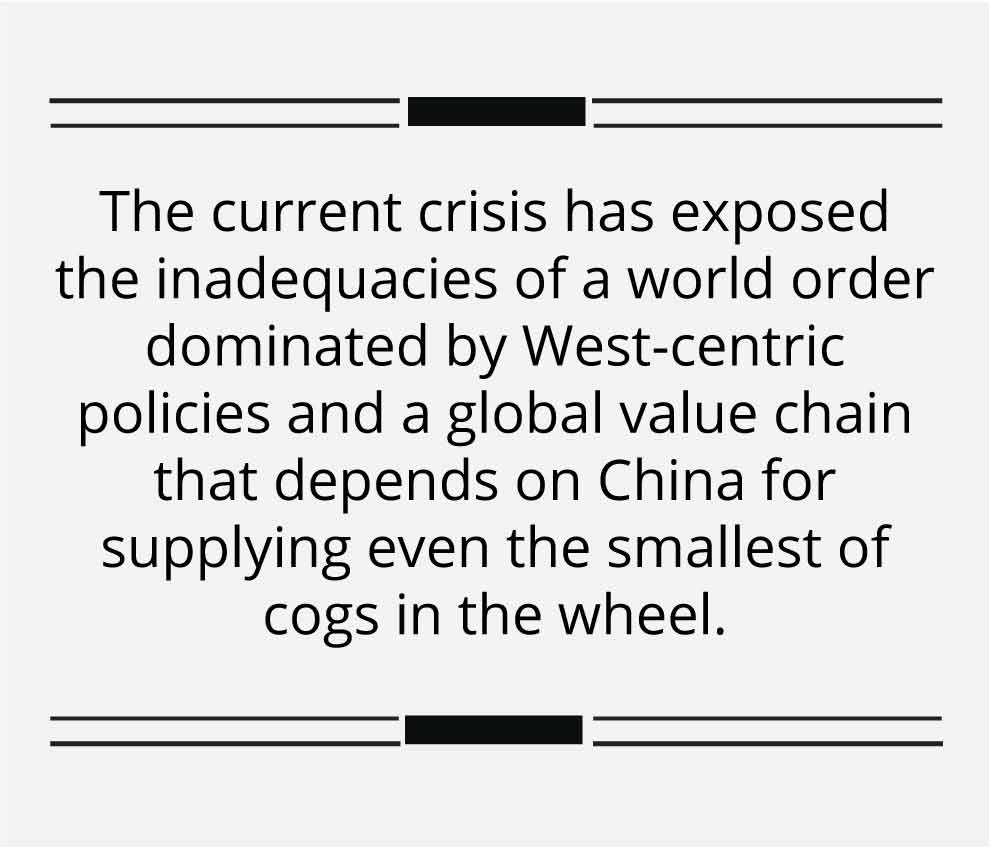 It was in the early stages of the outbreak that Prime Minister Narendra Modi vowed that India would do everything possible to help with humanity’s fight against Covid-19. Many other countries of course made the same promise – but India is the only one which has lived up to its pledge and walked the talk. Consider the following actions: 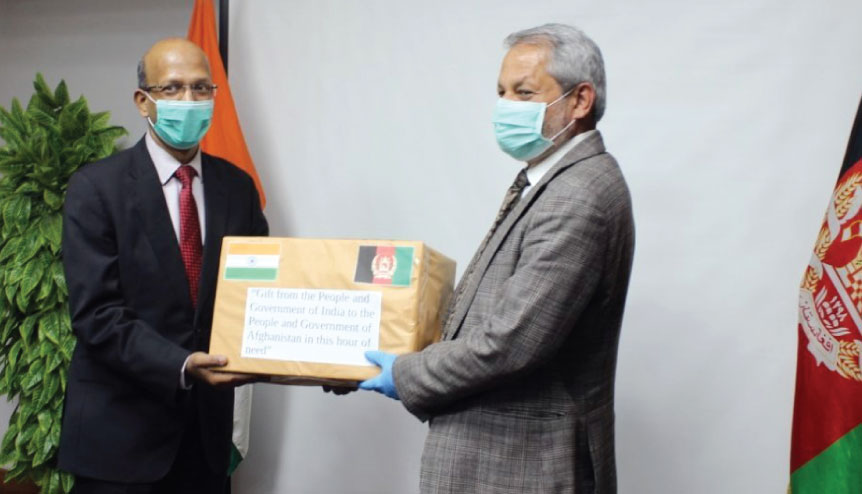 Amid a global psyche scarred by the virus and China’s cavalier actions, India has, thus. undertaken a vast gamut of actions and philanthropic initiatives to heal the world and bring even rival countries closer in the process. In doing so, it has earned universal praise and acknowledgment as the world’s lighthouse, so to say, helping the international community sail through stormy waters never seen in recent history.

From the Australian and the British Prime Ministers to President Donald Trump, WHO Director General, Brazil President and European leaders, every major world power today remains indebted to India for its firm and fair actions during the pandemic. 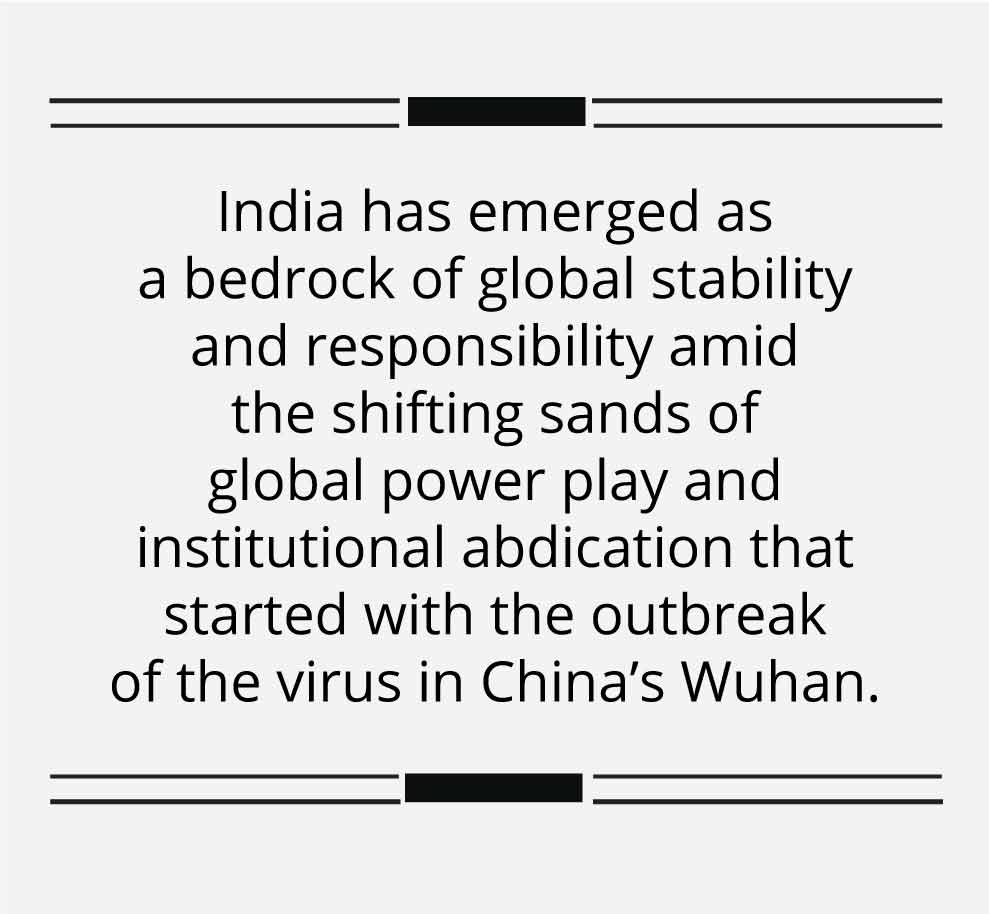 While the actions have earned a salute from UN Secretary-General Antonio Guterres, India has actually fulfilled the duties of multilateral agencies such as the UN and WHO – while major world powers have only been too preoccupied with their domestic situations. Beyond the promise of a $5 trillion economy, India has clearly demonstrated that with its deep reserves of modern skills, ancient knowledge and decisive leadership, it’s well placed to handle the challenges of a post-Covid world order.

One natural byproduct of this leadership can also be measured by the trust of the global community on India. Companies, businesses and investors ravaged by the virus-induced economic crisis have not only looked at pulling their investments out of China, but also looking at India’s sunrise sectors for stable investments. Of course, the Indian economy faces headwinds ahead like any other major economy in the world, and India has its fair share of rebuilding to do. But with the balance of global geopolitics now in turmoil following the abysmal leadership of major world powers, India is strategically placed to consider its position in the world afresh – thanks to the combination of its global humanitarian outreach, economic opportunities and strong culture of sustainable innovation. 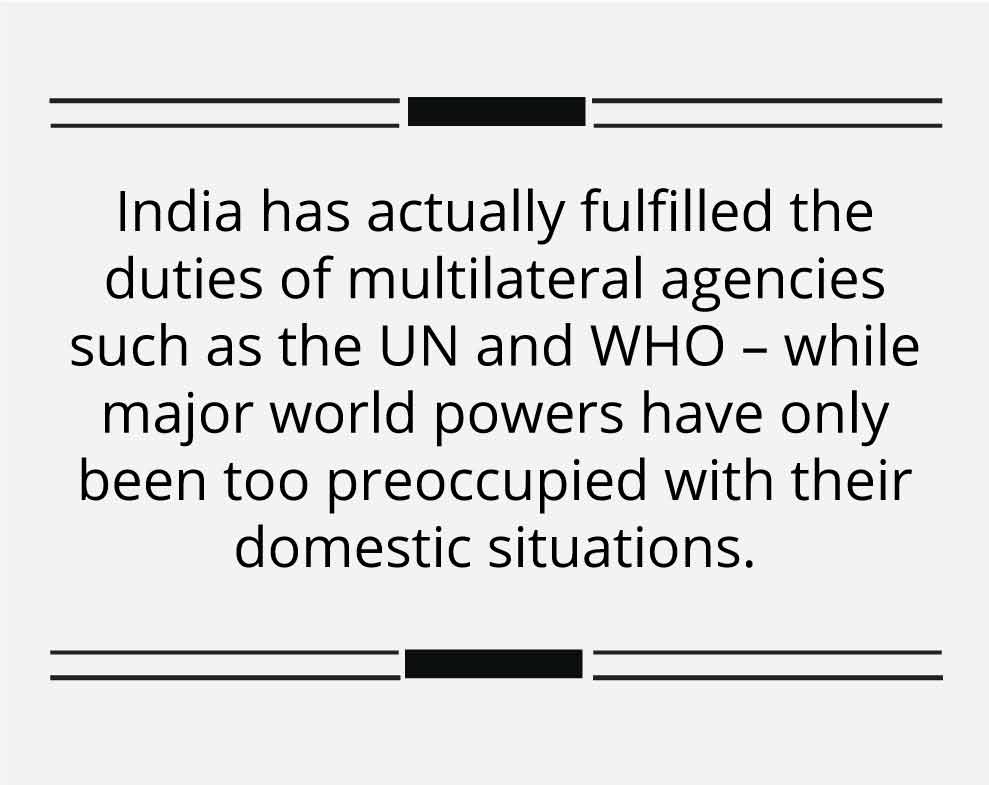 The need for a new leader at the helm

Global leadership in the post-Covid world order entails a clear focus not only on the eco-political dimensions based on sustainability and human development, but also the ability to tackle non-political and non-military crises such as epidemics, climate change and natural disasters. These are precisely the areas where India has already demonstrated unambiguous and dynamic leadership – and the time has therefore arrived for the rightful recognition of that role.

When the United Nations was being shaped during the Second World War with the mandate to save succeeding generations from the “scourge of war,” the two founding principles of the agency were to secure and sustain international peace and security, and the UN Security Council was thus set up by all signatory states of the UN Charter with that primary responsibility. As the world emerges out of the pandemic and the UN prepares to celebrate its 75th anniversary, it is evident that India has not only fulfilled that primary responsibility time and again, barely any of the permanent members of the UNSC have been able to handle the pandemic with the mature leadership that India has shown in the past four months. A permanent seat for India’s permanent responsibility will only be a just reciprocation of those efforts, and any further delay will be an insult to humanity and an embarrassment for global multilateralism. The world doesn’t need to suffer the same consequence as endured by the Aztec nation. 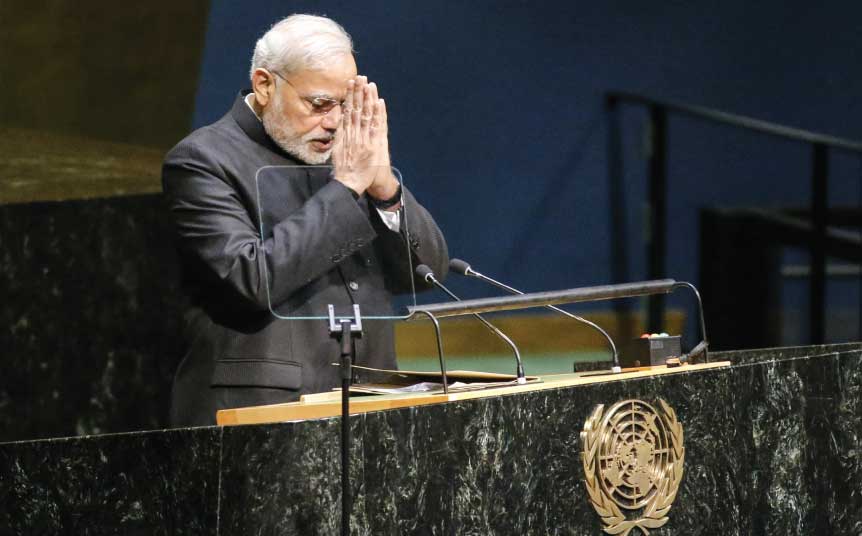 In the next four parts of this series, we will not only examine in greater depth why the much-bandied reforms of the United Nations must happen immediately and get India a seat at the UNSC, but also review in details India’s outreach to the world, the successful thought process of the government and its quick implementation that has led to India’s impressive Covid-19 leadership, and why it will become one of the most lucrative investment destinations of the post-Covid era.

**Tomorrow: India’s outreach to provide assistance and medical supplies to various countries around the world