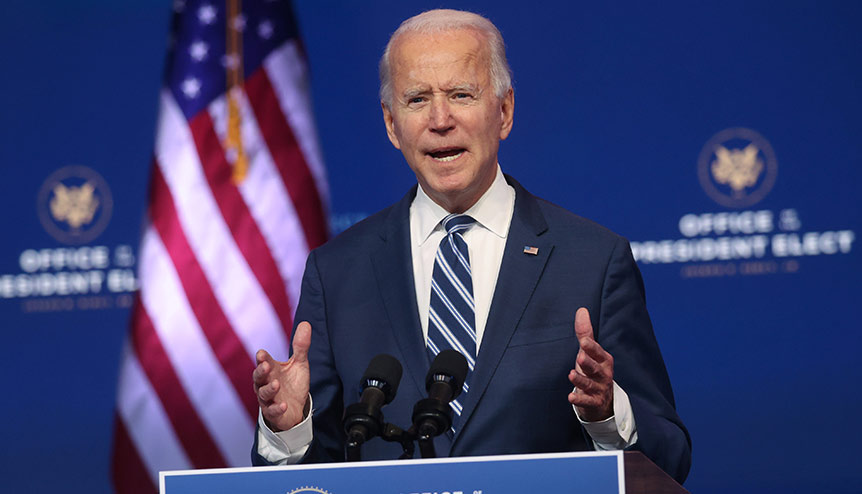 While Indo-US relations have been on a solid trajectory of growth during Trump, a Biden administration will add further momentum to that in key areas like counter-terror, defence partnership, supply chain, trade negotiations and immigration reforms.

When the US media called Joe Biden as the winner of the US presidential election last week, there were worries in some Indian quarters that it was an inevitable signal of rupture with the bonhomie developed between President Donald Trump and Indian Prime Minister Narendra Modi.

After all, who can forget the roaring success of Howdy Modi, Namaste Trump and the personal friendship between the leaders of the world’s oldest and largest democracies?

But while Indo-US relations have been on a solid trajectory of growth during the Trump presidency, a Biden administration will add further momentum to those relations, according to former diplomats and foreign policy experts.

Not only are the stakes too high in the relation between the two democracies but the convergence of strategic interests between New Delhi and Washington also point the way to a smooth continuation of Indo-US policies followed since 2000. In his message of congratulations to Biden, PM Modi noted his “critical and invaluable” contribution as Vice President towards strengthening Indo-US relations and looked forward to working closely together once again to take India-US relations to “greater heights”.

There are several instances in the past which offer India assurances about Biden. Releasing the agenda for the Indian-American community on India’s Independence Day this year, the campaign of the US President-elect said: “Biden will deliver on his long-standing belief that India and the US are natural partners, and a Biden Administration will place a high priority on continuing to strengthen the US-India relationship.

No common global challenge can be solved without India and the United States working as responsible partners. Together, we will continue strengthening India’s defence and capabilities as a counter-terrorism partner, improving health systems and pandemic response, and deepening cooperation in areas such as higher education, space exploration, and humanitarian relief.” 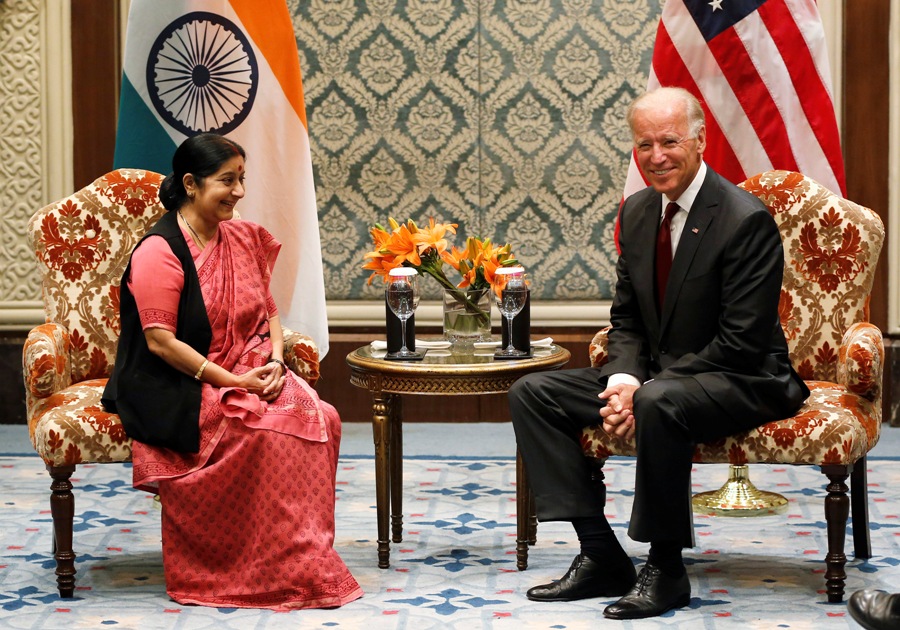 New Delhi July 23, 2013 during the former’s visit to India. Biden was a valuable supporter for the India-US partnership under the Barack Obama administration.

Significantly, Biden played a vital role, both as Chairman of the Senate Foreign Relations Committee and later as the US Vice-President, in systematically deepening strategic engagement with India. In 2006, three years before he became the Vice-President of the US, Biden articulated this vision for the future of US-India relations: “My dream is that in 2020, the two closest nations in the world will be India and the United States”.
Although (then) Senator Barack Obama was initially hesitant to support the landmark Indo-US nuclear deal, Biden led the charge and worked with both Democrats and Republicans, to get the agreement approved in the US Congress in 2008.

And he was a valuable supporter for the India-US partnership under the Barack Obama administration. “Biden has been supportive of India over the years: in 2001, as Chair of Senate Foreign Relations Committee, he had written to President George W Bush, calling for removal of sanctions against India; in 2008, as Ranking Member of same committee, he had helped pilot US-India civil nuclear cooperation agreement through the Senate; as Vice President, he was part of the Administration that declared India a Major Defence Partner, and expressed support for India’s permanent membership of UN Security Council,” Arun K Singh, former Indian ambassador to the US, said in an interview with Mint.

Indian Navy holds passage exercise with US Navy’s Nimitz Aircraft Carrier in the Indian Ocean. The Obama-Biden Administration named India a “Major Defence Partner,” the first time that any country was given this status, outside of the US’s traditional alliance system.

When the Obama-Biden Administration named India a “Major Defence Partner” – a status approved by the US Congress – it was for the first time that any country was given this status, outside of the US’s traditional alliance system.

In August 2016, the two sides also signed the Logistics Exchange Memorandum of Agreement (LEMOA), the first of the three “foundational pacts” for deeper military cooperation. LEMOA allows the militaries of the US and India to replenish from each other’s bases, and access supplies, spare parts and services from each other’s land facilities, air bases, and ports, which can then be reimbursed. This has been crucial for India-US navy cooperation, since the two countries continue to work very closely in the Indo-Pacific. The Trump administration further strengthened the cooperation with the signing of the remaining foundational pacts – COMCASA and BECA.

Indeed, faced with a common threat of China flexing its muscles across Asia, successive US governments of both Republican and Democratic parties have always regarded India as central to the defence architecture of the Indo-Pacific region. In recent months, with China increasingly asserting its economic and military belligerence, those compulsions have become only more ingrained in the foreign policies of India and the US.

The continuity of that is reflected in the defence cooperation agreement signed by Prime Minister Modi with the US as a bulwark against China – and thereby one can rest assured that the Indo-US defence and counter-terror cooperation will not only remain intact but is likely to grow even further.

It was also during Biden’s time as Vice-President that the US officially declared its support for India’s membership in a reformed and expanded United Nations Security Council – a key demand of successive Indian governments.

Congratulations @JoeBiden on your spectacular victory! As the VP, your contribution to strengthening Indo-US relations was critical and invaluable. I look forward to working closely together once again to take India-US relations to greater heights. pic.twitter.com/yAOCEcs9bN 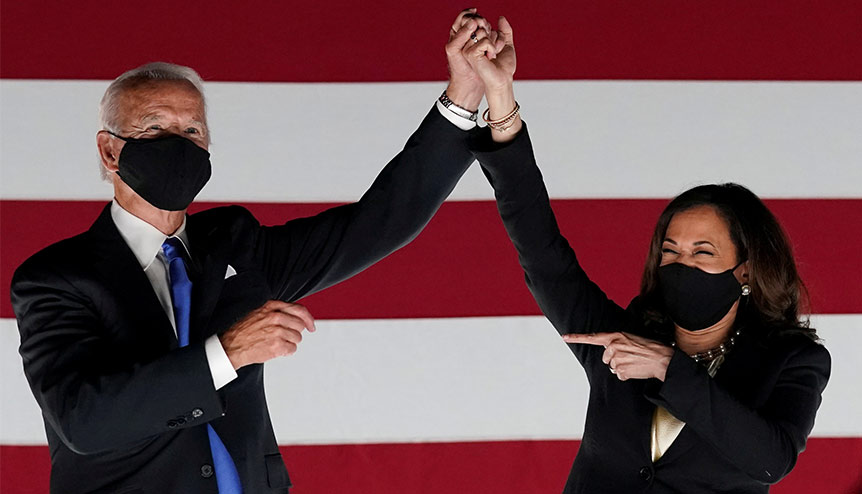 One of the key concern areas where the Biden administration will need to demonstrate its willingness to work with allies like India is trade relations.

On balancing the relations between India and Pakistan, several experts point to the fact that with a severe trust deficit currently in play between Washington and Islamabad and terror groups targeting American soldiers in Afghanistan, relations between them are at an all-time low. It is also useful to recall that Biden was the Vice-President when President Obama ordered the operation against Osama Bin Laden in the Pakistani garrison town of Abbottabad.

Time to focus on an FTA

One of the key concern areas where the Biden administration will need to demonstrate its willingness to work with allies like India is trade relations. While Biden’s ‘Made in America’ plan proposes to restrict buying of steel, cement, concrete, building materials and equipment from abroad, India’s key demand from the new administration would be the restoration of GSP benefits and the removal of tariffs on steel and aluminium.

The US is India’s top trading partner with bilateral trade of $88.75 billion recorded in 2019-20, as per Indian government data. According to USTR data, the parameters of which are calculated differently, total trade in goods and services between the two countries for 2019 was more than $146 billion. But from June 2019, President Trump removed India from countries eligible for the Generalized System of Preferences (GSP), thus reinstating tariffs on certain Indian imports.

With a new United States Trade Representative (USTR) set to take charge, it would also be a great opportunity to reset the reset button in trade negotiations as well as set the sights on an eventual free trade agreement between India and the US – with manufacturing and supply chain being key highlights as the US seeks to develop a more reliable and less China-centric global trade order. With a comprehensive FTA has remained elusive under the Trump administration, New Delhi has signaled its readiness for a more limited trade deal. In September, Indian commerce minister Piyush Goyal said that Delhi was ready to seal the deal “tomorrow”, but the US government had gone into a slow mode due to COVID-19. At the ministerial ‘2+2’ summit on October 30, a joint statement noted that there were “ongoing discussions” between India’s Ministry of Commerce and Industry on market access, removing trade barriers and ease of business. 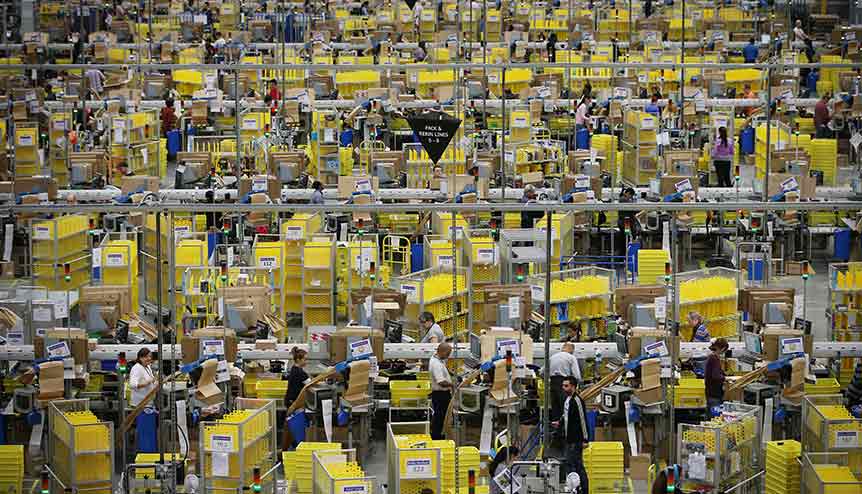 Governments as well as business in both the US and India should be involved early in a deep dive dialogue on possibilities based on synergies and complementarities, especially in diversifying supply chains.

“The US will need partners as it seeks to develop an alternative, and a more reliable and secure supply chain,” said Singh, the former ambassador. “The US global competitiveness in many areas, particularly in digital technologies, will be enhanced through a partnership with India. PM Modi has also spoken of India becoming a trusted partner in supply chains, while also building its self- reliant capabilities. I believe the US and India will both benefit by focusing on exploring cooperation in emerging technology areas such as artificial intelligence, cyber, data, digital, quantum computing. Governments as well as business on both sides should be involved early in a deep dive dialogue on possibilities based on synergies and complementarities. This would also provide a stronger geo-economic basis to the growing geostrategic convergence,” he said.

Coupled with the fact that Biden has vowed to support family-based immigration, increase the number of visas offered for permanent, work-based immigration, reform the temporary visa system for high-skilled jobs and eliminate the limits on employment-based green cards, the new US administration’s engagement with New Delhi is certain to take bilateral relations to more enduring heights.