Under the shadow of the pandemic, India-US relations hit new highs

Under the shadow of the pandemic, India-US relations hit new highs 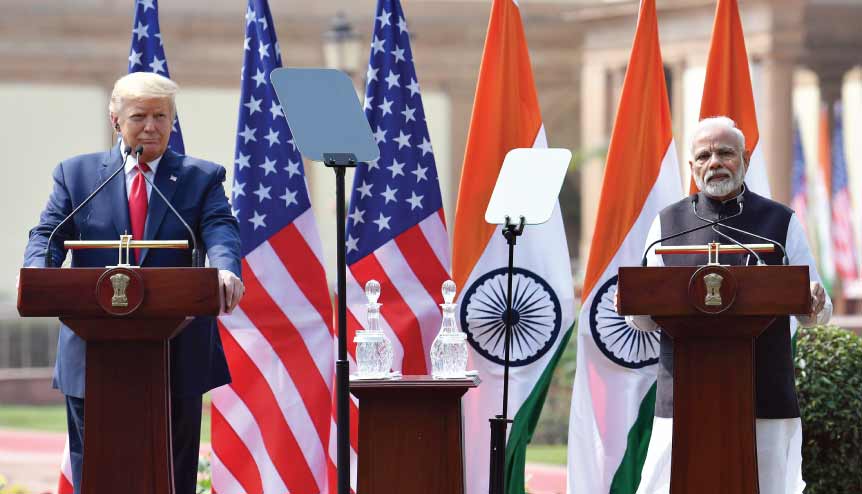 Beyond vaccines, ventilators and drugs, India and the US must continue to support each other in order to neutralise the threat posed by China.

A pandemic as widespread and lethal as the novel coronavirus brings with it the obvious set of challenges for any country. It, however, also presents an opportunity to distance yourself from your foes and further cement your ties with friends. In the case of India and US, it has only accelerated the growing proximity.

Relations between the two countries have generally been on an upswing in the last few years. It reached a new high in February when US President Donald Trump made his first state visit to India just before the pandemic took giant proportions. Trump is known for his maverick persona and blunt outbursts but the consistent camaraderie he shares with India’s Prime Minister Narendra Modi is an exception to his relations with other heads of states across the world. Even including the heads of NAFTA member countries. This has helped bilateral relations in no uncertain way. 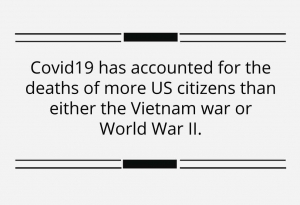 “India has been so great and as you know your Prime Minister has been a very good friend of mine. I just got back a short while ago from India and we are very much together,” Trump said on his return from the trip.

With nearly 2 million cases and 100,000 deaths and counting, the US is the biggest victim of the virus. Already, Covid19 has accounted for the deaths of more US citizens than either the Vietnam war or World War II. The scale of the crisis is such that it has overwhelmed the healthcare system of even the biggest economy of the world. Short of answers, India, which is also known as the pharmacy of the world, was among the first to lend a solid helping hand. The country allowed export of the anti-malarial drug hydroxychloroquine, which is known to be beneficial in the treatment of the virus, to the US in April. More than 50 million doses have so far reached the shores of the US since then.

India extends medical aid to the US

“Extraordinary times require even closer cooperation between friends. Thank you India and the Indian people for the decision on HCQ. Will not be forgotten! Thank you Prime Minister @NarendraModi for your strong leadership in helping not just India, but humanity, in this fight!” Trump had promptly tweeted in response. “I want to thank Prime Minister Modi of India for allowing us to have what we requested for the problem arose and he was terrific. We will remember it.”

Extraordinary times require even closer cooperation between friends. Thank you India and the Indian people for the decision on HCQ. Will not be forgotten! Thank you Prime Minister @NarendraModi for your strong leadership in helping not just India, but humanity, in this fight!

Things have only gotten better ever since. In a barter of sorts, the US announced it would supply India with ventilators to help bridge the shortage of the life-saving device in the country. The two countries are also collaborating on developing a vaccine for the virus.

“I am proud to announce that the United States will donate ventilators to our friends in India. Together we will beat the invisible enemy! We stand with India and Prime Minister Modi during this pandemic,” Trump tweeted in mid-May. “We are also cooperating on developing a vaccine.”

Modi was equally quick to acknowledge the gesture by the US President.

“Thank you @POTUS @realDonaldTrump. This pandemic is being fought collectively by all of us. In such times, it’s always important for nations to work together and do as much as possible to make our world healthier and free from COVID-19. More power to India – United States friendship!” he tweeted that very day.

This pandemic is being fought collectively by all of us. In such times, it’s always important for nations to work together and do as much as possible to make our world healthier and free from COVID-19.

Details on the number or type of ventilators that US will provide to India were not forthcoming, but there are at least three vaccine candidates in various stages of development. These are part of separate bilateral projects involving two of India’s leading pharmaceutical companies. The US counterparts are research units of two universities and the third is a biotechnology company.

The improvement in ties is not restricted to just the sphere of the fight against the pandemic though. 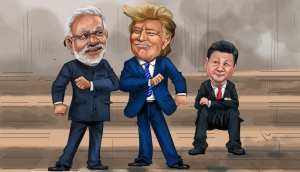 Putting China in the corner

At a global geo-political level, both nations have a common adversary in China and the early contours of a global anti-China alliance show prominent role of US and India. While the US has been openly critical of China’s handling of the virus –Trump has repeatedly referred to it as the Chinese virus, India has for long been a fence sitter. The only mild act of antagonism towards China was adding restrictions on investment from Chinese firms into India in a bid to thwart opportunistic and hostile takeovers of Indian companies.

Last week however, India hardened its stance when it joined a list of 62 countries in backing a draft resolution that seeks a probe into the origin of the Covid-19 outbreak. This hasn’t gone unnoticed in China. The increased transgressions by the Chinese army in Ladakh region threatens to reopen an old chapter of acrimony between the two Asian neighbours. 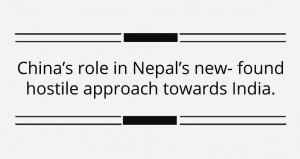 The unprecedented skirmish with Nepal, the Hindu majority Himalayan country that serves as a buffer between India and China, offers further proof. Nepal objected to India’s construction of a road in an undisputed area that has always been believed to be Indian territory. The tract of land is close to the Nepal-India-China trijunction point. Traditionally, India has had good relations with Nepal with no territorial dispute between the two countries. In recent times though, China has made inroads in the country offering aid and investments in building infrastructure – a strategy it has employed in other Asian countries like Pakistan and Sri Lanka as well.

This growing intimacy between the two countries prompted the chief of Indian Army MM Naravane to hint at China’s role in Nepal’s new- found hostile approach towards India.

“There is reason to believe that they must have raised these problems, these issues at the behest of someone else. That is very much a possibility,” he said.

This is not the first time, India and China have faced off on a battlefield. The two countries fought a war in 1962 and as recently as 2016, they were involved in a tense face off at Doklam near Sikkim. In the Ladakh sector too, there have been allegations of transgressions from time to time. Unlike in the past when US had stayed clear treating these as regional disputes, this time it has indicated it may not be a mute spectator.

“For anyone who was under any illusions that Chinese aggression was only rhetorical, I think they need to speak to India,” US diplomat Alice Wells said recently.

Beyond the vaccines, ventilators and drugs, India and the US need as much help and support as possible in neutralising the threat posed by China. It would not be the first time the threat of a common enemy acts as a glue in deepening a friendship.