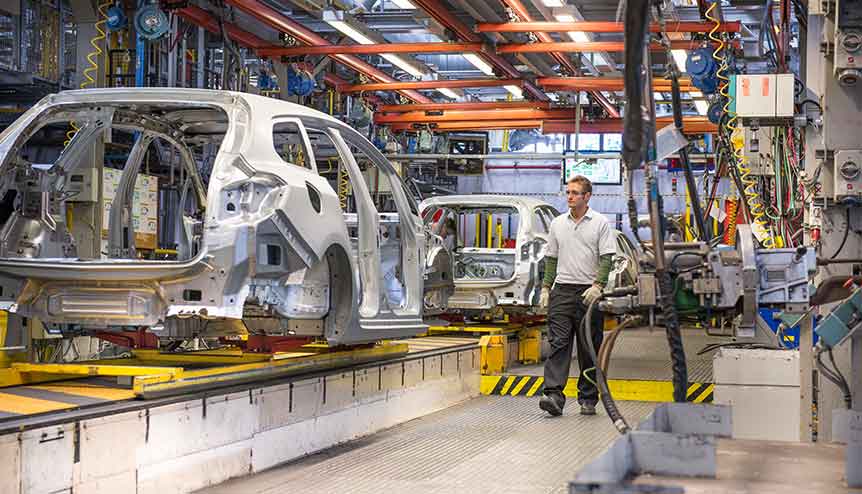 Companies around the world have been forced to look beyond their conventional production lines and expertise to join the war against an invisible common enemy.

Corporations exist to solve problems and provide services, not just to make profits. This formed the basis of the concept of stakeholder capitalism, which was at the heart of the World Economic Forum (WEF) at Davos in January this year. At the time, the coronavirus pandemic was an invisible enemy that had not made its potential for havoc at a global scale fully known as yet.

The idea that long-term shareholder returns can increase if society in general is better served has never seemed more relevant than right now as the world mounts a war-time fightback against an invisible enemy. And just as in the times of war, industries the world over have geared themselves towards a focussed mission of joining the supply chains for equipment required for the COVID-19 fightback – from ventilators and testing kits to hand sanitisers and face masks.

Indian companies have been at the forefront of this mission, with Pune-based Mylab Discovery Solutions making worldwide headlines with its affordable coronavirus testing kit. The Made in India kit was created in record time to help tackle the country’s reliance on expensive imported kits from countries like Germany.

The firm has now joined hands with the Serum Institute of India to start producing these kits on scale, a multi-million-dollar deal that may eventually help address the global demand for testing kits.

Another such frugal innovation from India that stands out in this war against the pandemic is from India’s Mahindra Group – from plants and assembly lines traditionally associated with the manufacture of automobiles and tractors. The group’s chairman, Anand Mahindra, declared that the company would join the war against coronavirus by producing affordable ventilators desperately required by hospitals dealing with an increasing flow of patients afflicted with the deadly virus. The company has since developed a prototype of a bag valve mask, commonly known as an Ambu bag, which could result in a breathing aid that would cost less than $100. The engineering teams based at the automaker’s Mumbai and Nashik plants developed the prototype within a record 48 hours.

Thinking out of the box 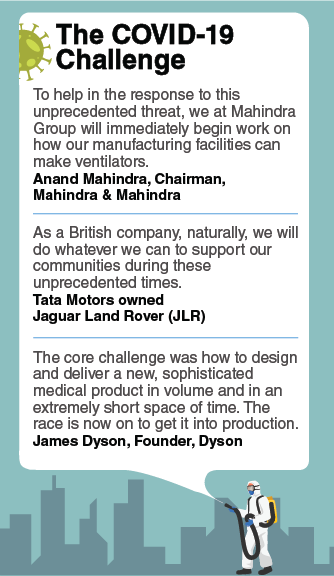 James Dyson, the head of an engineering company with no medical expertise but known for its out of the box thinking, declared in a company-wide rallying cry that “the race is now on to get it into production” after the government placed an order for 10,000 based on a prototype. Dyson has also promised to donate another 5,000 to aid global efforts to fight COVID-19, with 1,000 of them reserved for the UK.

Other companies, including Tata Motors-owned Jaguar Land Rover (JLR), was among the companies approached by the Boris Johnson-led government to get their thinking caps on to this war effort.

“We have been approached for help with the production of ventilators as part of ongoing discussions with government. As a British company, naturally, we will do whatever we can to support our communities during these unprecedented times,” said JLR.

The biggest reflection of this new kind of approach to fighting a common global enemy came in the form of a collective of seven UK-based Formula 1 teams, traditionally accustomed to competing against each other on the racetrack but ready to unite for a higher purpose.

Their respective technology arms have made significant progress in coordinating their response to the UK government’s call for assistance with the manufacture of medical devices to help in the treatment of COVID-19 patients. The seven teams’ combined efforts, termed Project Pitlane, are part of a British industry-wide effort to manufacture and deliver respiratory devices to support the national need.

F1 said that Project Pitlane will pool the resources and capabilities of its member teams to greatest effect, focusing on the core skills of the F1 industry: rapid design, prototype manufacture, test and skilled assembly.

It is not just the big manufacturing giants but also smaller breweries and distilleries in the UK that are looking at alternative uses for their production lines and offering to bolster supplies of hand sanitisers.

Regularly washing hands with soap and water and keeping hands sanitised is the central advice for the fight against the rapidly spreading virus, with the supplies of hand sanitisers coming under understandable strain. The Metropolitan Police, the UK’s largest police service at the frontline of enforcing the UK government’s stay-at-home message, said it was feeling the squeeze as the demand for hygiene products have skyrocketed during the outbreak.

The force identified the alcohol industry as an alternative source for the provision of hand sanitisers and opened talks with a range of gin distilleries and breweries, several based in London, with many offering to supply hand sanitisers to the force.

Portobello Road Gin in Notting Hill, 58 Gin Ltd from Haggerston and Copper Rivet Distillery from Chatham are among the companies joining the drive. Other distilleries are also in conversation with other police forces and public bodies with similar plans. And, Budweiser Brewing Group has said it would donate 6,000 litres of hand sanitiser free of charge to the Met Police.

With mega giants from Alibaba to Amazon trying to do their bit in the fight against COVID-19, the concept of stakeholder capitalism is certainly set for the kind of real-world experience that few would have imagined even during Davos in January 2020.

The scale of the war against coronavirus is still beyond complete grasp but the hope would be that this drive and innovative approach among companies would resonate long after the world has come to grips with this crisis.

*Read more on the role of the private sector in the coronavirus relief effort next.