Tunisia – A pool of talent in the Mediterranean

Tunisia – A pool of talent in the Mediterranean

The African nation invites Indian investors to partake in its growth journey with a wide array of financial advantages and tax incentives.

Tunisia underwent a crucial phase in its history, launching a revolution that dazzled the world with its peacefulness and quietness. In 2019, the country was able to secure the pillars of its democracy, through the organisation of transparent and free fair elections.

Like the political process, the road to the next step – economic reform – is challenging. Indeed, several incentives are designed to channel resources toward selected high-value-added and knowledge-intensive sectors, and likewise stimulate product innovation and market diversification.

growth reached 1.5 per cent in 2019, signalling a certain resilience of economic recovery. According to the World Bank, Tunisian economic growth will reach 2.2 per cent, as the business climate improves, structural reforms are implemented and security and social stability increase.

With almost 65,000 new graduates each year – out of which more than 30 per cent are in the fields of engineering, computer science, multimedia – able to sew complicated models in a short time, Tunisia is considered as a pool of talent in the Mediterranean area.

The European Union (EU) accounted for almost 70 per cent of Tunisian imports and about 74 per cent of its exports.

As part of its policy to promote and diversify its trade, Tunisia has signed 52 double taxation agreements and 54 bilateral agreements for the promotion and protection of investments.

Tunisia became a member of the Common Market of Eastern and Southern Africa (COMESA) in 2018 which represents a market of 500 million people with trade valued at more than $110 billion annually.

The legislation and the specific procedures govern the right to intellectual property. They are consolidated by the law on the protection of personal data.

Moreover, the Transversal Law to improve the business climate, enacted in April 2019, aims at removing the administrative obstacles in order to mobilise investments and facilitate procedures. 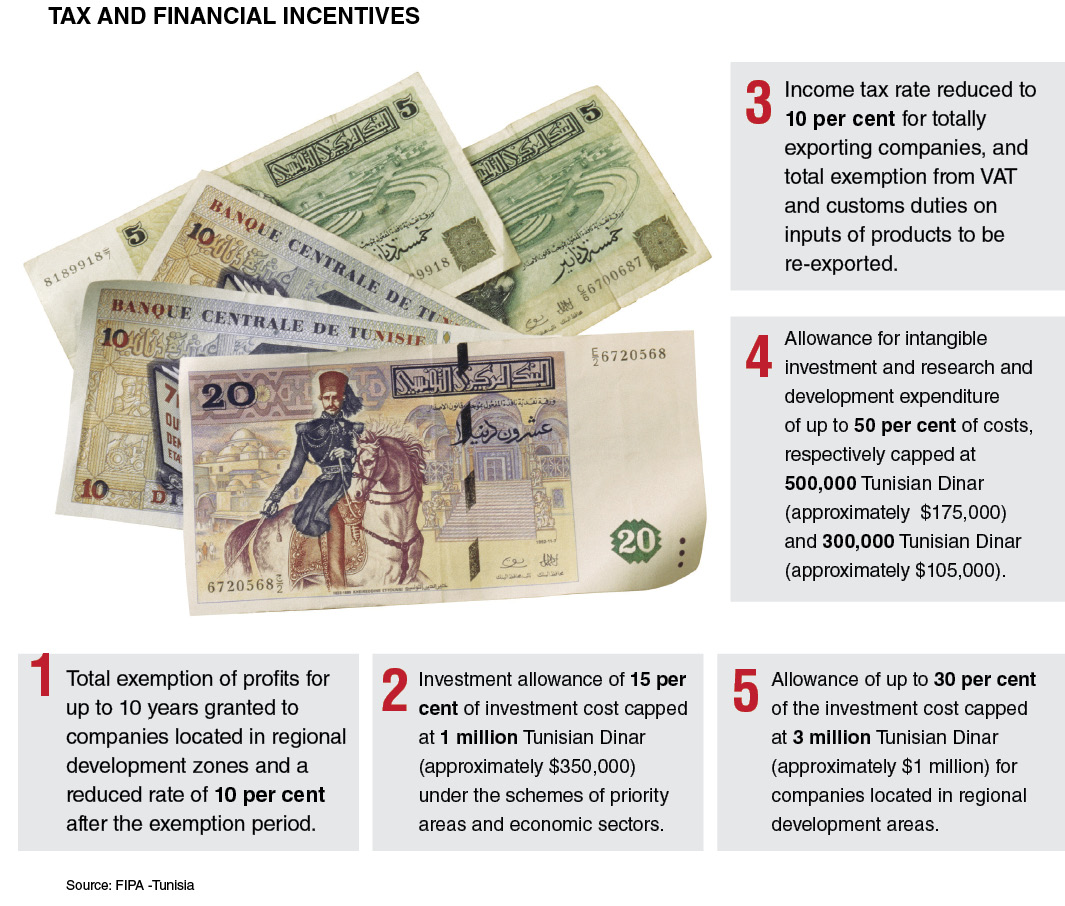 Diplomatic relations between India and Tunisia were established in 1958 and the two countries have signed numerous bilateral agreements.

Indian companies in Tunisia are mostly operating in the fields of mechanics, chemicals and rubber and textile. Tunisia has been a reliable source of phosphate exports to India since the 1950s. Furthermore, India purchases over 50 per cent of Tunisia’s total phosphoric acid exports.

Whether it be high-style garment or extremely sophisticated and highly technological mechanical or technical parts, Tunisian institutions respond in a timely manner and with accuracy to orders coming from Europe, America and other Arab and Asian markets.

INVESTMENT LAW SET UP ON 1 APRIL 2017 OFFERS THE FOLLOWING ADVANTAGES:

• Total freedom of foreign participation in the capital of offshore companies.
• Reduction in the number of authorisations and revision of specifications.
• Freedom to transfer funds (profits, dividends and assets) abroad.
• Possibility to recruit 30 per cent of foreign executives during the first three years upon simple declaration and 10 per cent guaranteed thereafter in all cases.
• Strengthening of the incentives to support regional development and the projects of national significance.

Abdelbasset Ghanmi is the General Director of FIPA-Tunisia.

About the Author: Abdelbasset Ghanmi