Skip to content
Trump’s GSP bite may not hurt India much, but…

Trump’s GSP bite may not hurt India much, but… 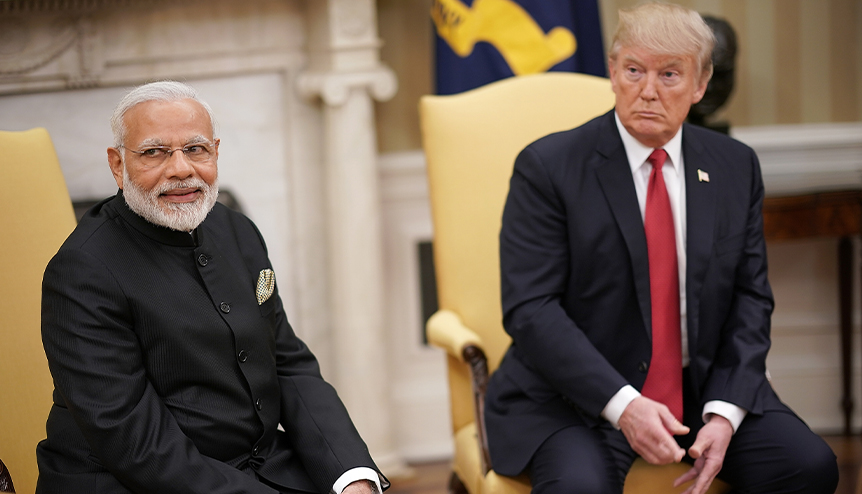 The latest US move to deny Indian exports a tariff-free regime under the Generalised System of Preferences (GSP) is an unnecessary irritant.

It had to happen sooner rather than later. US President Donald Trump’s transactional administrative paradigm has found a new target after China, Mexico, Canada and the European Union (EU) – India.

The US has decided to remove imports from India from the Generalised System of Preferences (GSP) programme that enabled some Indian products zero-tariff access to the American market.

India is the world’s largest beneficiary of the GSP programme. It exports about 2,000 products worth $5.8 billion, or 12 per cent of its exports to the US. These include auto components, marine products, carpets, granite and other raw materials, handicrafts and jewellery.

The Narendra Modi government and most analysts in India have treated this news with nonchalance. The reason for this apparent lack of concern: The duty concession is only about $190 million – not a very great deal in the context of overall exports.

The withdrawal of GSP will take effect 60 days from the date of the announcement via a presidential proclamation. But there is little likelihood of the Indian government striking a deal during this period to stall this withdrawal as India’s Election Commission (EC) is almost set with the dates for the Lok Sabha elections, bringing into force the election Code of Conduct, which will tie the government’s hands on providing any concessions to any party.

Though not entirely unexpected given Trump’s mercurial and unpredictable nature, this latest salvo from the White House quite unnecessarily adds an irritant and a new imponderable into the otherwise close, robust and growing bilateral relationship and the almost perfectly aligned geo-political vision of the two countries.

No one on the Indian side is saying so on record but there is surprise that Trump has opened another front with a major ally at a time he is locked in a high octane trade war with China.

The US President’s main grouse is India’s refusal to remove the price caps it has imposed on knee implants and medical stents. The Modi government views these as life-saving medicines – India is committed to providing cheap healthcare for its citizens – but the decision has not gone down well with US companies for which these are big money spinners.

Also new rules that place restrictions on foreign e-commerce companies and encourage domestic retailers and an insistence that all companies store the personal data of Indians in India have upset large US companies such as Amazon, Google and Walmart.

Newspaper reports say the Indian government is unlikely to drag the US to the World Trade Organisation (WTO), although it has a strong case as the amounts involved are piffling and Indian exports are not expected to take a significant hit. Also, labour-intensive sectors such as textiles and footwear, which don’t come under GSP, will not be touched by Trump’s decision, thereby mitigating any risk of large-scale job losses ahead of the Lok Sabha elections.

Then, the denial of easy access to the US market may actually present Indian exporters with an opportunity to explore alternatives – like the UK market, which is experiencing a significant amount of churn as it wrestles its way to its eventual divorce with the EU.

‘India Global Business’ is also surprised at this turn of events and especially at Trump for bringing out the big guns for what is essentially small change, given the huge stakes involved in the US-India strategic partnership and the humungous orders that the Indian defence establishment will bring to the international arms market over the coming decade.

As the Modi government has shown time and again, today’s New India does not take a hit on the chin as just another blow; it hits back with all its might at a time and place of its choosing. It is still not clear how the Indian government will react to this latest shot across its bows. So far, it has handled the fallout as one would expect from a mature nation.

One can only hope that there are no fresh provocations from the White House – for the sake of what most people still believe could be the defining partnership of the current century.