Skip to content
Trump takes aim at India; how should India respond?

Trump takes aim at India; how should India respond? 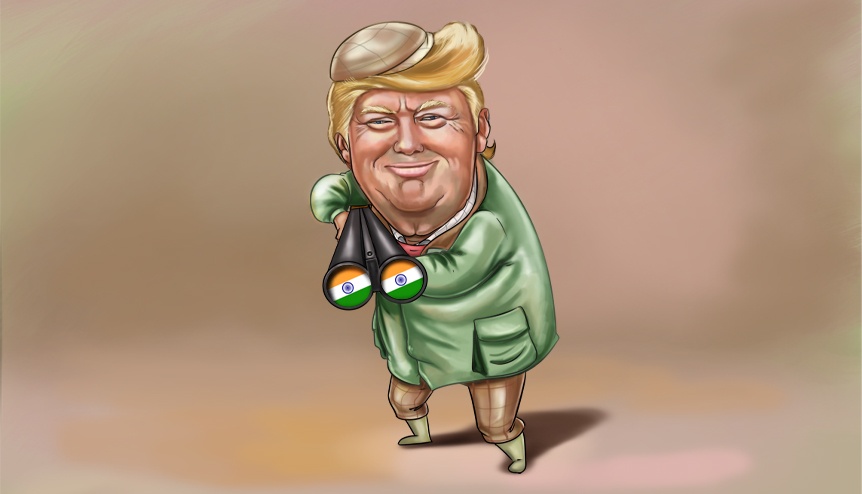 In US President Donald Trump’s playbook, trade and strategic relationships with important allies seem to reside in mutually exclusive tight silos. How else can one explain the series of trade fights he has picked with countries such as Canada and Mexico, the EU, Japan and now India.

This laser focus on trade to the exclusion of all else is causing serious concern and consternation in capitals around the world. And it’s easy to make Trump the punching bag in response.

But to be fair, the US regression on free trade started much earlier under Barrack Obama. His Trans Pacific Partnership (TPP), a multilateral trade deal that Trump has scrapped, was panned for doing little to reduce trade barriers while increasing protectionism, which would have forced consumers to pay more for, among other things, prescription drugs, recorded music, books and computer software. Perhaps, this was to be expected.

After 70 years of unprecedented dominance as the world’s policeman and trade arbiter, some regression was inevitable regardless of who occupies the White House. With Obama, one could at least discern a pattern in his actions. But with Trump, it is a high stakes game of chicken. There is no template that can be analysed for pointers to his probable course of action.

If India retaliates in response to his recent measures – scrapping GSP benefits, levying taxes on steel and aluminium exports from India – by putting up barriers, New Delhi will demonstrate to the world that India won’t bend. This will be tactical. But this won’t solve the problem. India will need to be more strategic.

India and its friends need to constantly demonstrate that delinking trade and strategic considerations by the Trump administration is not only counter-productive but also plain stupid. India and the US have much more in common than even 10 years ago. They have more interests in common and more concerns in common.

Indian Prime Minister Narendra Modi has proved time and again that he will not premise India’s engagement with the world – and the US – on the country’s past ideology-driven positions. This has enabled India’s strategic and diplomatic establishment to approach several important issues – such as the still evolving strategic relationship, the shared concern on ensuring freedom of navigation in the disputed South China Sea, the precise parameters and architecture of the Quad as a platform to ensure the security of the Indo-Pacific region, among others – with a clean slate and a clear vision to push the country’s enlightened self-interest.

But Trump’s single-minded focus on unilaterally pushing American interests can lead to a backlash. India’s new Commerce Minister, Piyush Goyal, has a lot of nimble footwork to do in order to get things back on an even keel. But he is too wise a politician to think this can be done in silos.

And though Modi has walked down the path of national interest – much to the chagrin of those advocating a more ideologically “pure” approach – it remains a fact that significant sections of India’s diplomatic machinery, still clinging India’s legacy positions on foreign policy, is in urgent need of recalibration. More trade, less ideology is the way forward. Fortunately, in Dr S. Jaishankar, India has a foreign minister who is well equipped to navigate this transition.

An important part of this new paradigm will be the primacy of bilateral relations. Global and multilateral alliances will remain important, but most have been framed in the issues of the past rather than on the opportunities of the future. Hence, their rational is being questioned now more than ever before, resulting in multi-nation blocs increasingly playing a lesser role.

Bilateralism is steadily becoming the new desired norm for many countries. It will suit India in many ways. For example, Britain’s dramatic and unexpected vote to leave the EU, will provide both London and New Delhi an opportunity to reorder their deep but currently drifting relationship without the bureaucrats of Brussels breathing down their necks.

But to come back to Trump, India and other allies will have to find a less hostile, more realistic way of dealing with him.