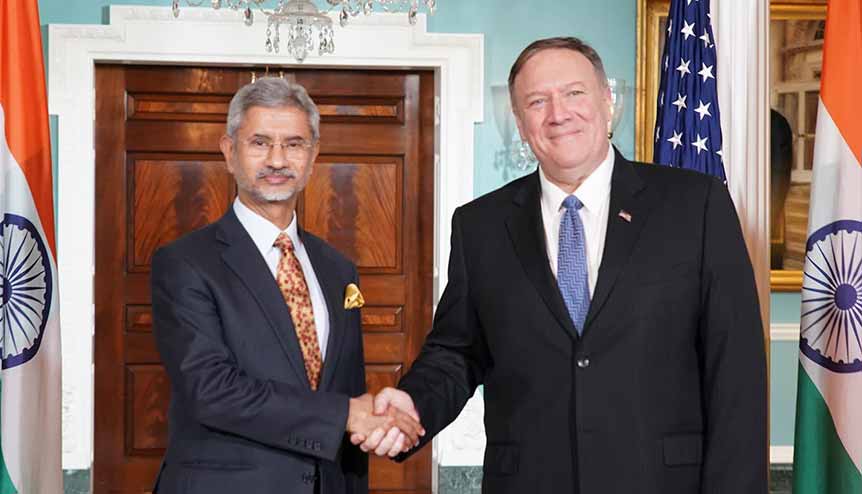 The close cooperation between India and the US on ways to combat COVID-19 stands in sharp contrast to India’s transactional ties with China.

On 24 March, Chinese Foreign Minister Wang Yi tried to push New Delhi into a tricky corner by seeking Indian Foreign Minister S. Jaishankar’s support to ward off the US’ remarks on the COVID-19 as a “Chinese virus” and squarely blame Beijing for failing to stop the spread of the coronavirus by providing the world with an early warning.

Now, it is common knowledge in world capitals that India and the US share a deep-rooted suspicion of China’s rise and its great power ambitions. And though the Narendra Modi government has made common cause with the US on several issues, it has finessed its foreign policy to maintain a functional working relationship with the Chinese government.

Jaishankar carefully sidestepped the trap and avoided blaming any country for the global pandemic that has affected more than a million people worldwide and more than 2,000 people in India as of 2 April 2020.

And although the two countries have agreed to collaborate on ways to control and fight the outbreak of the virus, New Delhi seems a little bit wary of China’s offer of assistance given the experience of countries such as Italy, Czech Republic and Spain, where Made in China testing kits have given an unforgivably high percentage of incorrect results.

It will also be difficult for India’s democratically elected government to ignore the sentiment of the people, which largely blame China for the medical and economic crisis that is engulfing the entire world and causing job losses and other hardships in India. Influential sections of the Indian media and commentariat have written and spoken about how China first tried to cover up the story on the virus and then was less than transparent about the spread of coronavirus across that country and on the issue of human-to-human transmission.

Even before the COVID-19 pandemic hit the world, China had been making thinly veiled moves to challenge Washington’s global leadership position. So, it came as no surprise to analysts when the Chinese leadership claimed the upper hand in the fight against coronavirus by first declaring it had controlled the virus even as the United States and Western Europe struggled so visibly to tame this invisible enemy.

Given the long history of wariness in Indo-Chinese ties, it came as no surprise that India has jumped wholeheartedly into the partnership with the US to find ways to combat the virus – including research on a new vaccine – compared to the more transactional issue of buying Personal Protective Equipment (PPE) from China.

Senior ministers and other officials have been in regular contact to work out the modalities of this cooperation. Recently, Jaishankar spoke to his counterpart, US Secretary of State Mike Pompeo on two separate occasions on ways to strengthen the supply chains relating to global pharmaceuticals, healthcare and manufacturing.

China still at the core of Indo-US ties

Importantly, they also discussed the Indo-Pacific Region – a clear indication that China was the 800-pound gorilla in the (virtual) room – and the developments in Afghanistan. This is particularly significant as it indicates that the core of the relationship is still humming smoothly even though more immediate concerns, such as COVID-19, are grabbing the headlines.

Reading between the lines, it has become clear that cooperation with the US on COVID-19 is only an extension of the already robust strategic relationship – though tensions remain on trade. The virus has simply become another strategic issue that the two sides have decided to tackle together. With China, things aren’t obviously that simple. The transactional buyer-seller relationship on coronavirus-related equipment and other material doesn’t, therefore, have the same resonance as the close coordination on the issue between India and the US.

Policy makers in India and the US and governments across the world will wait eagerly for the middle of April. That’s when we’ll know the results of a study on the clinical trials of Remdisivir, an anti-viral drug that can, depending on the test results, be used for treating Covid-19 cases. Gilead is an American research-based pharmaceutical company with deep links and a large R&D presence in India.

In a parallel but unrelated development, the Serum Institute of India, the world’s largest maker of vaccines, has tied up with the New York-based Codagenix for the development of a Covid-19 vaccine. This will be ready for animal testing soon and could hit the markets in two years, if all procedures progress smoothly.

The US has requested India to relax the ban on the exports of chloroquine and hydroxychloroquine, both of which have been approved by the US Food and Drugs Administration (FDA). India, which has long experience of dealing with infectious diseases is cooperating with the US for the development of vaccines and medicines to COVID-19. For example, India’s Transnational Health Science and Technology Institute and the Indian Council of Medical Research (ICMR) are collaborating with their US counterparts such as the Centre for Disease Control (CDC) and the US National Institute of Allergies and Infectious Diseases for this purpose.

Then, keeping in mind the close ties between the two countries, the US administration has allowed companies such as Abbot, Sanofi Pasteur and GM to enter bulk supply contracts with India for diagnostic kits and ventilator machines. Such deals are being permitted only for the US’s closest friends and allies.

A senior government official described the collaboration between the two countries on COVID-19 as an extension of their close strategic clinch and their mutual wariness of China. There is also a clear, if unstated, goal of trying to deny China the diplomatic advantage of emerging as the saviour of the world – from a problem that was created by irresponsible behaviour by the Chinese authorities in the first place.

These collaboration agreements, he continued, are adding another layer to already deep and widespread cooperation between the two countries on several scientific issues – ranging from defence to space technology to computing to cyber security. Almost every US technology company worth the name has large R&D centres in India, which do cutting-edge work for the global markets.

Drug and pharmaceutical companies were the one missing link in this technology chain. The joint efforts to quickly develop a COVID-19 vaccine could help fill this critical gap and lay the foundation for a long-term relationship in original pharmaceutical research in India.