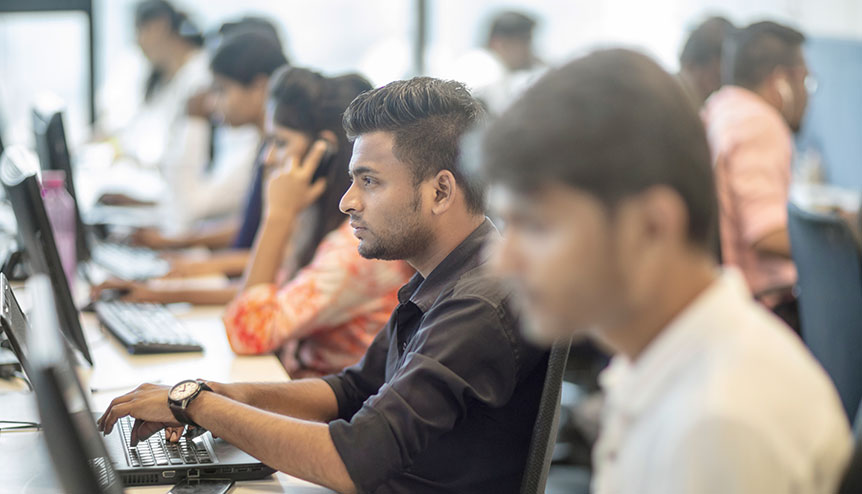 India’s tech start-ups have placed the country at the cutting edge of emerging technologies and are attracting billions of dollars of investments from tech giants and investors such as Google, Amazon, Softbank and Alibaba. A proactive government, a helpful policy environment and the second largest internet user base are fuelling this boom.

New age Indian IT companies, especially start-ups working in cutting areas such as robotics, virtual reality and augmented reality, among others, are once again putting Indian innovation on the world map.

Suddenly everyone from Masayoshi Son of Softbank to Mark Zuckerberg of Facebook to Satya Nadella and Sundar Pichai of Microsoft and Alphabet (parent of Google), respectively, to Jack Ma of Alibaba want a larger piece of the Indian IT pie.

Consider this: Nasscom, the trade body representing Indian IT companies, recently released its fourth annual report in collaboration with Zinnov, a global consultancy. It says:

* India has the world’s third largest start-up eco-system after the US and China.
* India also has the third largest numbers of unicorns (24), in the world, after China (206) and the US (203).
* India added seven unicorns in the first eight months of 2019.
* 50 more start-ups are likely to become unicorns in the near future. Of these “soonicorns”, as they have been dubbed, as many as 35 are likely to touch $1-billion valuation within two months.
* The cumulative valuation of all start-ups in India is $101 billion.
* Indian start-ups now account for 430,000 jobs, 60,000 of them within the last year.

The report adds that India will have 100 unicorns by 2025 that will create 1.1 million direct jobs.

“There are 23,000 start-ups (in India) and 800 are technological start-ups… But, when I see global number of unicorns, that number is 400-plus and so there is a case for greater mentorship and encouragement,” India’s Law, Communications & IT Minister Ravi Shankar Prasad said recently.

Some global tech giants such as Google have set up incubators in India that provide fledgling start-ups with office spaces that they share with other start-ups, in addition to funding and support services.

Y Combinator, a US fund that has helped seed the birth of many iconic start-ups such as Dropbox, AirBnB and InstaCart, among others, is stepping up its bets on India. Sam Altman, President of Y Combinator recently told the media: “I think there will be multiple $10 billion-plus companies which will be started in India in the next few years and, hopefully, we will get a shot at funding some of those.”

Fuelling this boom are policies unveiled by the Narendra Modi government specifically targeted at making India a major hub for start-ups and recent disruptions in the telecom space that have boosted internet penetration to 58 per cent (627 million users) and pushed its smartphone user base to 500 million. According to a Boston Consulting Group-The Indus Entrepreneurs (BCG-TiE) report titled “The $250 Billion Digital Volcano: Dormant No More”, the Indian internet economy is expected to touch $215-265 billion (7.5 per cent of Indian GDP) by 2020 from 5 per cent in 2018.

Billions of dollars pouring in

The largest of these investments was the $16-billion acquisition of Indian e-commerce start-up Flipkart by US retailer Walmart. But this will be dwarfed by Softbank’s plan to invest $100 billion in Indian tech start-ups through its Vision Fund.

Facebook, meanwhile, proposes to launch three more innovation hubs in Mumbai, Bengaluru and New Delhi by the end of the current financial year to nurture and incubate Indian start-ups in emerging technologies. It has already set up its first such hub in Hyderabad.

These massive investments and the efforts of hundreds of thousands of bright Indian Indians, bankrolled by global and Indian tech giants and venture capitalists, is making a difference to India’s standing in the world.

The Global Innovation Index, released on 24 July 2019 in New Delhi by Indian Commerce and Industry Minister Piyush Goyal, showed that India had gained five positions and now ranks 52nd in the world, a gain of 29 positions since 2015.

This was preceded by the 2018 KPMG Global Technology Innovation Report, in which India was ranked third, after the US and China as the place tech leaders around the world expect the next big tech breakthroughs to come from.

“India maintains a strong showing…. It is ranked in third place, as 13 per cent of global technology industry leaders indicate its potential for tech breakthroughs. India has prioritised government support for entrepreneurship and a burgeoning culture of innovation. Many start-up business models are leveraging emerging technologies to cater to India’s mobile-first generation,” the report said.

“Start-ups are at the core of India’s transition journey towards becoming a leading innovation hub in the world. With the young and dynamic pool of entrepreneurs and skilled workforce, India is likely to become a focal point to generate innovative ideas in the near future,” Akhilesh Tuteja, Head of Technology, KPMG in India, told the media.

Artificial intelligence – a challenge for India

While Indian start-ups are doing well and are at the cutting edge of innovations in robotics, fintech and e-commerce, it is way behind the curve in artificial intelligence. And this, many believe, could be India’s Achilles’ heel.

A 2018 discussion paper at NITI Aayog, the Indian government’s official think tank, titled “National Strategy for Artificial Intelligence” pointed out that India had only 386 PhD-educated researchers, out of more than 22,000 such personnel worldwide, in the field of AI.

“Moreover, serious research work in India in the field of AI is limited to less than 50 researchers with concentration mostly in institutes such as the IITs, IIITs and IISc,” it said.

Unless remedial action is taken immediately, this could emerge as the pothole that stymies India’s tech ambitions as almost all future innovations will have a large AI component. Experts say it needs a concerted push from the government in the form of policy support and incentives, with active support from industry and academia, for AI to develop in India.

India has justifiably earned the moniker of being the world’s back office thanks to its success in outsourced IT services. But countries such as the Philippines are chipping away at India’s advantage. Building on the outsourcing base and dipping into largely the same pool of talent, India is slowly reinventing itself as a global innovation hub.

To facilitate this, the Ministry of Electronics and Information Technology (MeitY) has set up the MeitY Startup Hub (MSH), a platform to connect the start-up eco-system, which was inaugurated in October this year by IT minister Prasad. India has about 23,974 government-recognised start-ups.

“MSH will act as a national coordination, facilitation, and monitoring centre that will integrate all the incubation centres, start-ups, and innovation related activities of MeitY,” reads the MSH website. The hub will promote technology innovation, start-ups, and the creation of intellectual properties.

To maintain the momentum, though, there must be better regulations that support technological innovation, train tech talent, incentivise it to stay in the country, and attract foreign and domestic investment. If these conditions are met, India has unmatched potential to become the next Silicon Valley.