A first-of-its-kind research into the Indian diaspora’s influence on UK-India relations throws up not only some solid tax and revenue data but also reflects upon the intangible inputs of this 1.5-million-strong resource.

It was during his first visit to the UK as Indian Prime Minister back in November 2015 that Narendra Modi coined the phrase “Living Bridge” during his historic address to a gathering of Global Indians at Wembley Stadium in London. The phrase has since become etched in the bilateral vocabulary as a symbol of the vibrancy of the UK-India relationship.

However, what had remained unquantified so far was an estimate of the kind of monetary value that can be attached to the many successful diaspora-owned businesses in the UK.

‘India in the UK: The Diaspora Effect’ is an attempt at measuring this unknown quantity following some detailed research conducted by Grant Thornton UK and the Federation of Indian Chambers of Commerce and Industry (FICCI), alongside the High Commission of India in London.

The highlight findings reveal that these companies have a combined revenue of £36.84 billion, employ over 174,000 people and pay over £1 billion in Corporation Tax in the UK.

These figures relate to 654 Indian diaspora-owned companies in the UK, out of an estimated total of 65,000, as the analysis focussed on companies with a turnover of at least £100,000. On the investment side, these 654 companies collectively invest around £2 billion through capital expenditure.

The report, taglined “Celebrating the energy and entrepreneurship of the Indian diaspora in the UK”, finds a sector-wide sweep of diaspora-owned firms, with hospitality dominating the landscape at 19 per cent, followed by healthcare and pharmaceuticals at 15 per cent, retail and wholesale (13 per cent), real estate and construction (13 per cent) and food and beverage (9 per cent) to complete the top five. London dominates the overall spread, with 52 per cent of the diaspora-owned companies based in the UK capital. 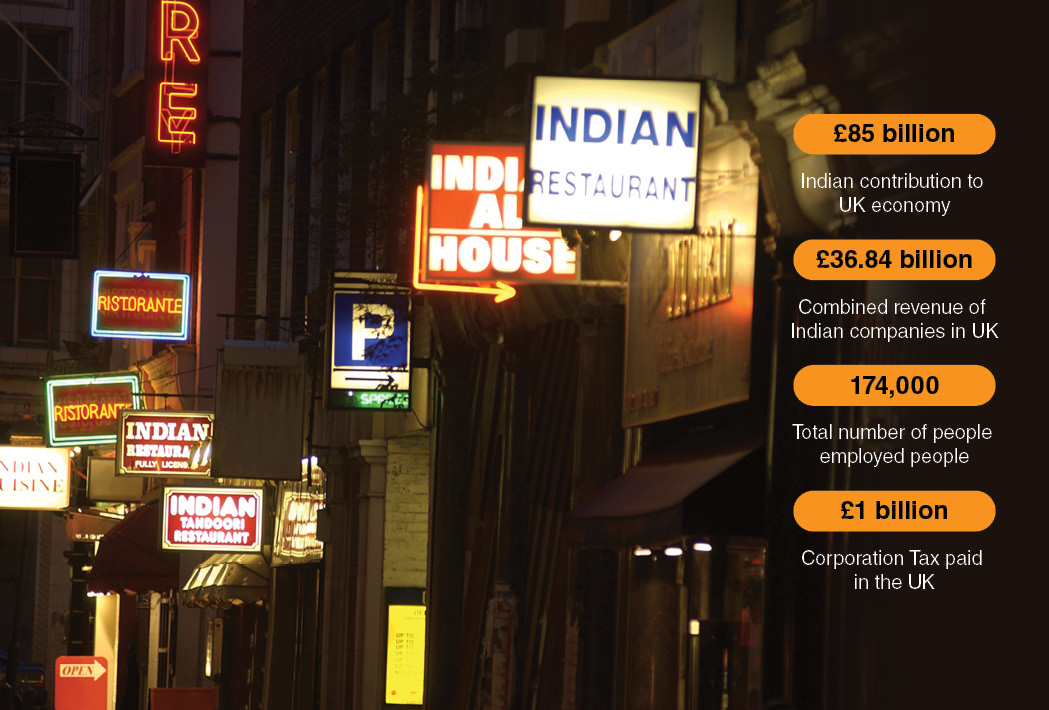 A row of Indian restaurants in the UK. The British have adopted certain Indian dishes to their palate, the curry being the most popular among them. 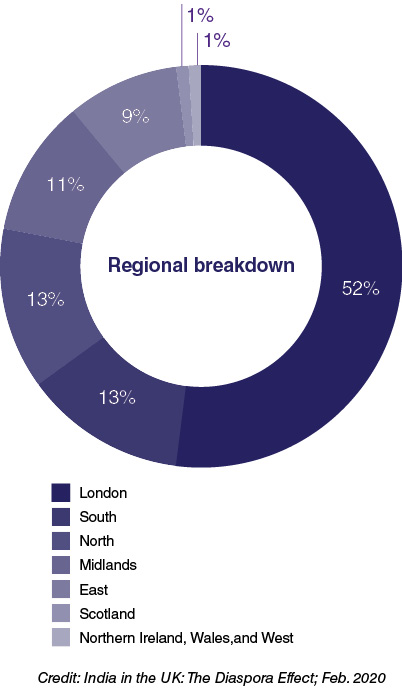 The researchers stress that the inaugural report is an effort to create some indicative rather than absolute reference point, as the effort was to try and fill a knowledge gap in relation to an important aspect of the UK-India tie-up.

Baroness Usha Prashar, Chair of FICCI UK, said: “The economic contribution of the Indian diaspora in the UK is rightly applauded and commented upon but to date it has not been quantified. This report is an attempt to fill that gap.

“It provides very helpful information which we hope will be built upon in the future. As the size, spread and influence of Indians around the world grows, the potential of the diaspora to make a substantial contribution to its adopted countries around the world and to India is enormous.”

The Indian High Commissioner to UK, Ruchi Ghanashyam, who had triggered the research project last year, echoed this view and said expects future editions to cover smaller and medium enterprises (SMEs) – an area the diaspora businesses are very active in.

She said: “Though this report looks only at the businesses with an annual turnover of more than £100,000 we hope that contributions of the many smaller enterprises will be added in future reports.

“The task has been challenging due to the size of the diaspora and paucity of readily available information in the public domain.”

As a result of the latest analysis, released in London in early February, the estimated India-related contribution to the UK economy brings the combined turnover to £85 billion, employment generation of 280,000 and over £1.7 billion paid in taxes. This data has been collated by Grant Thornton UK by combining the figures for India-owned UK companies from its annual ‘India Meets Britain Tracker’ with the latest diaspora-owned company findings.

“These are significant numbers. We anticipate that these numbers are likely to grow even further as the bilateral relationship develops,” notes the report.

In other highlight statistics, around 35 per cent of diaspora-owned companies have one or more women directors on their board. On the employment generation front, 23 businesses generate 80 per cent of the total jobs provided by the Indian diaspora companies in the UK – a total of 140,000 jobs. The top five employers include B&M Retail Limited, with 26,496 jobs, followed by Vedanta Resources Ltd (25,083), Boparan Holdco Ltd (21,949), Hinduja Automotive (19,601) and HC-One Ltd (10,949). 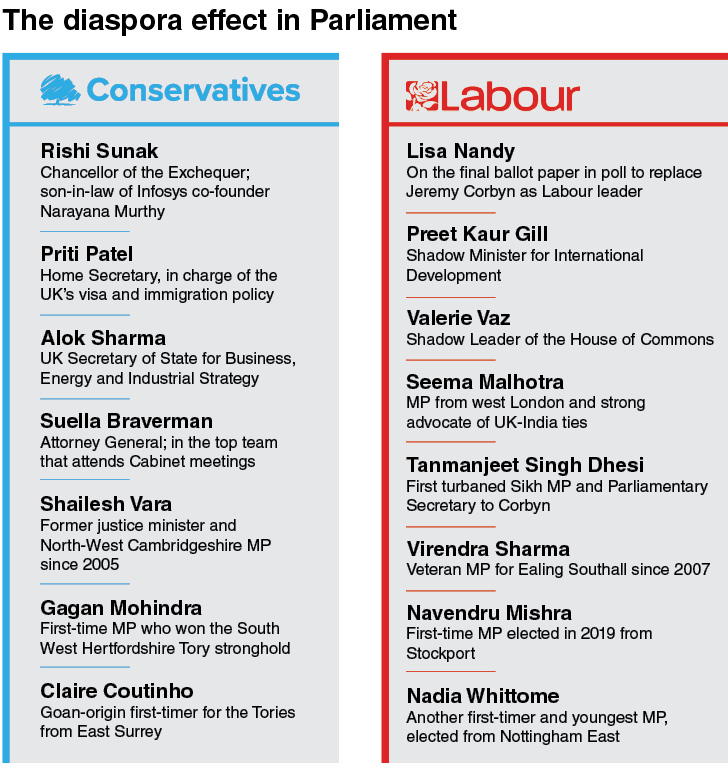 As Anuj Chande, Partner and Head of the South Asia Group, Grant Thornton UK, pointed out, the new analysis is intended as a celebration of Indian diaspora contributions not just to the UK’s economic prosperity, but increasingly to its wider society too, in fields of science, the arts, sports and politics.

Some of the other aspects highlighted include the fact that 15 members of Parliament of Indian origin were elected to the House of Commons in the December 2019 General Election, and that there are 23 peers of Indian origin in the House of Lords. The UK’s most prestigious academic institutions all count experts of Indian heritage among their highest-ranking academic staff and British Indian actors, musicians, chefs and sportspersons have made their mark over the decades.

The contribution of the Indian diaspora to public institutions such as the state-funded National Health Service (NHS) is described as “indispensable”, with an estimated 50,000 medical professionals of Indian origin employed in the sector.

A bridge to build on

The message at the heart of the new research is for the UK to recognise and embrace this positive aspect of immigration, which is integral to any discussion around closer trade and economic ties.

As the Indian diaspora in the UK continues to drive business and help shape the nation’s economic, social, political, academic and cultural life, it’s time for the UK to engage with India as a powerful future partner.

And, this is where India Inc. offers an avenue with India Global Week, scheduled between 22-26 June this year, for both sides to fully capitalise on the diaspora effect amid discussions on what promises to be a “Decade of Aspiration, Acceleration and Assertion” for UK-India ties.