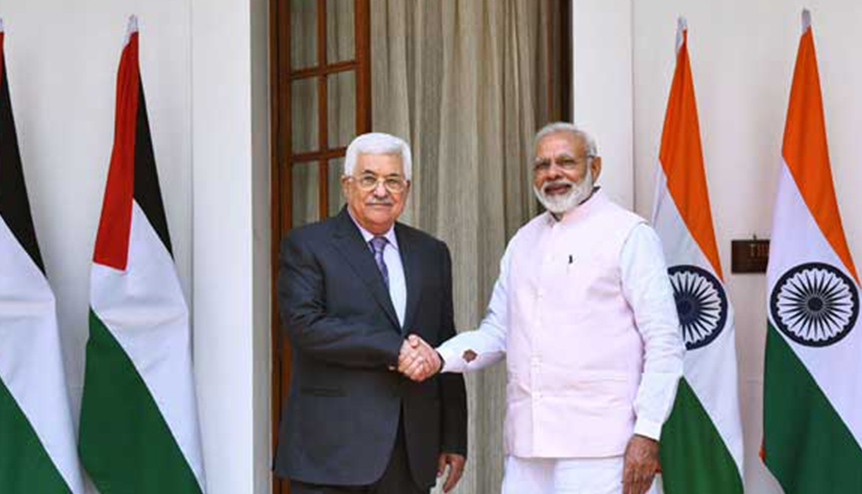 India has successfully managed the tough balancing act of maintaining friendly relations with both Israel and Palestine.

If there is one country that has successfully managed to balance relations with Israel and Palestine, which are interlocked in what is referred to as the most intractable conflicts in the world, it is India. In more than 70 years that the conflict has festered ever since the state of Israel came to force in 1948, the world has been divided between one that supports the Jews or the Arabs. The ethnic and religious overtures in the conflict, Israel as being the only native country for Jews around the world, means even unrelated countries often see each other with the prism of who supports whom in this fight.

As a secular democratic nation, India has managed to successfully walk the tightrope. Its diplomacy in the broader West Asian region is two-pronged – offering support in international forums to one side and bolstering economic relations with the other. Its dependence on crude oil from the Arab world coupled with a sizeable Muslim population back home meant India has been a strong ally of Palestine in multi-lateral platforms. In 1974, India became the first Non-Arab State to recognise the Palestine Liberation Organization (PLO) as the sole and legitimate representative of the Palestinian people. Fourteen years later, it also became one of the first countries to recognise the Palestinian State and in 1996, India opened its representative office in Gaza, which was later shifted to Ramallah in 2003. India also co-sponsored the draft resolution on “the right of Palestinians to self-determination” during the 53rd session of the United Nations General Assembly (UNGA) and voted in favour of it. It voted in favour of UNGA Resolution in October 2003 against the construction of the separation wall by Israel and in 2011 it again voted in favour of Palestine becoming a full member of the UNESCO. In fact, to appease the Arab world, India had also voted against the UN membership of Israel in 1949.

India also co-sponsored and voted in favour of the UNGA Resolution on 29 November 2012 that enabled Palestine to become a ‘non-member Observer state’ at the UN without voting rights while it supported the Bandung Declaration on Palestine at the Asian African Commemorative Conference in April 2015 and supported the installation of the Palestinian flag at UN’s premises in September 2015.

These are not insignificant steps and any other country would have earned the ire of Israel and with it, the US and possibly other West European nations as well. But that has not been the case with India. Its non-partisan approach in the 1960s and 70s when the world was getting drawn into the Cold War era meant India could start afresh and without any baggage when stability would return to global politics. After the fall of the Soviet Union in the late 80s and the end of the Gulf War in 1991, India was quick to realise the potential of Israel by establishing diplomatic relations in 1992.

Over the last 27 years, bilateral trade between the two countries has grown from just $200 million in 1992 – that comprised mostly of diamonds – to $5.65 billion in 2018-19. India enjoys the balance of trade here by $1.8 billion. Trade in diamonds constitutes close to 40 per cent of the trade between the two nations. India is Israel’s third-largest trade partner in Asia and seventh-largest globally. This, however, excludes defence procurement which has in the last two decades become a cornerstone in relations between the two countries.

Israel was one of the few countries that did not condemn nor levy sanctions on India in the aftermath of the Pokharan nuclear blasts in 1998. Defence ties between the two countries have only gone northwards ever since fuelled by India’s need to modernise its army and Israel’s prowess as a defence equipment hub. The Kargil war in the summer of 1999 was another watershed moment when the credibility of Israel as a reliable defence partner was reinforced for India. Israel supplied the Indian Air Force (IAF) with the Unmanned Aerial Vehicle (UAV) ‘Searcher’ and surveillance systems for Jaguar and Mirage squadrons and also upgraded the MIG-21 combat aircraft and supplied laser-guided bombs and 160mm mortar ammunition. These were not insignificant contributions for India in winning the war and India’s defence procurement from Israel has only gone up from there. From just $19 million in 1999, India’s procurement of weapons from Israel went up to a high of $767 million in 2016. In 2017, India, which is already the world’s largest arms buyer, was also Israel’s biggest market for arms and ammunition.

The strong economic ties have also rubbed off on diplomatic relations between the two countries. Indian Prime Minister Narendra Modi became the first head of the state to visit Israel in 2017. This was followed by Israel’s Prime Minister Benjamin Netanyahu making his own trip to India in January 2018.

That it did not induce even a murmur of protest or consternation in the Arab world is the proof of how well India has successfully de-hyphenated Israel and Palestine.