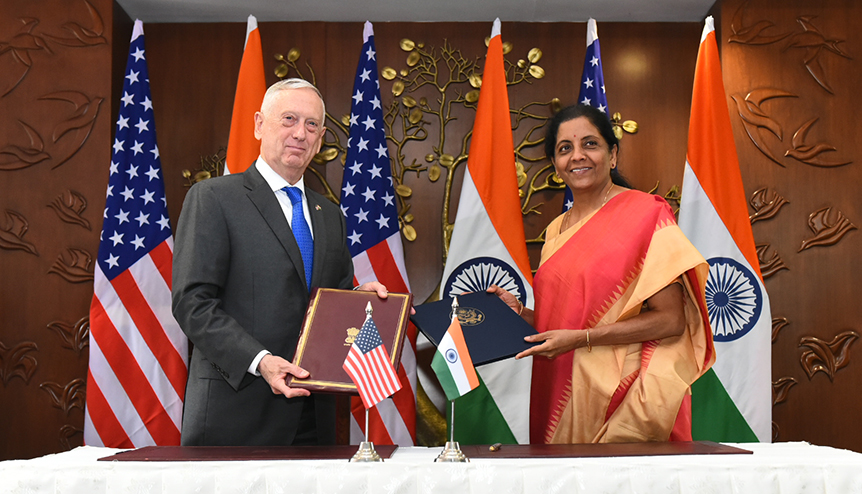 A strategic expert looks back at the first-ever India-US 2+2 Dialogue to analyse its long-term impact on bilateral relations.

In the end, it was the strategic logic of the bilateral partnership that was on display at the Indo-US 2+2 talks. The ‘transactionalism’ of the Trump Administration, of much concern to many in India, was relegated to the margins, and for good reason, and at least for the time being, Washington and New Delhi can hail the upward momentum in the relationship’s trajectory. It is clear that India and the US want to see their relationship evolve into a more robust strategic engagement. And both sides are not shy of being ambitious.

The format of the dialogue itself is indicative of a new maturity in the relationship, which according to US Secretary of State Mike Pompeo seems to have entered “a new era,” and is “symbolic of our increasingly close partnership”. Such a dialogue is important as it will keep the conversation focused at the strategic level allowing the two to tackle more tactical problems that will continue to bedevil the relationship from time to time.

This was underlined by the two main outcomes of the dialogue: the signing of the long-pending Communications Compatibility and Security Agreement (COMCASA) and setting up of a hotline between External Affairs Minister and Defence Minister with their American counterparts. After being under consideration for more than a decade, the Modi government finally took the decisive action of signing COMCASA, which will enable the transfer of communication security equipment from the US to India, facilitating “interoperability” between the two defence forces as well as with other militaries that use US-origin systems for secured data links.

It is one of the four foundational agreements that the US signs with its close partners for enhancing interoperability between militaries and will facilitate access to advanced defence systems, thereby allowing India to more efficiently utilize its existing US-origin platforms. After signing the General Security Of Military Information Agreement (GSOMIA) in 2002 and the Logistics Exchange Memorandum of Agreement (LEMOA) in 2016, the final one to be negotiated between India and the US is the Basic Exchange and Cooperation Agreement for Geo-spatial Cooperation (BECA).

While the two nations are taking their joint military training a notch higher by deciding to conduct a tri-services joint exercise off the eastern coast of India in 2019, the deployment of an Indian liaison officer at the US Naval Forces Central Command (NAVCENT), which is responsible for naval operations in Afghanistan, Pakistan and the oil-rich Gulf countries is even more significant. The message to Pakistan was unambiguous with the Secretary of State and Indian External Affairs Minister Sushma Swaraj calling on Pakistan to ensure that their territory was not used to launch terrorist attacks on other countries in their joint statement. As Swaraj underlined: “We have discussed terror emanating from Pakistan and have agreed that Pakistan needs to do a lot more to curb terror originating from it” even as they were unequivocal about their support for an Afghan-led, Afghan-owned peace and reconciliation process. This assumes importance in light of reports that the US has had recent back channel talks with the Taliban in Doha.

India-US convergence on Pakistan was even more striking coming as it did after Pompeo’s short five-hour visit to Islamabad, where the tension in the air was palpable. The Trump administration’s recent announcement that it would suspend $300 million in military support funds to Pakistan has unnerved the new government of Imran Khan which was hoping to get the benefit of doubt usually reserved for new governments. But this was the second major US cut in security assistance to Pakistan this year, underscoring the reality that patience with Pakistan is running thin in Washington. And Pompeo rubbed it in when he suggested that the Pakistan government had been told in advance about the impending sanctions and that the Trump Administration is yet to see “the progress that we need to see from them.” Where the US is still trying to settle old scores with Pakistan, Indo-US ties are about the future.

Defence cooperation continues to drive the relationship. US Secretary of Defence Jim Mattis made it clear that the US “will continue working together, join hands and expand India’s role as a primary major defence partner, to elevate our relationship to a level commensurate with our closest allies and partners”. And moving the defence engagement a notch higher, the two nations are now focused on enhancing closer private defence industry collaboration which will help Indian defence manufacturers to join the US military supply chain, thereby boosting the Modi government’s ‘Make in India’ initiative. And innovation is at the heart of this defence collaboration for which a Memorandum of Intent was signed between the US Defense Innovation Unit (DIU) and the Indian Defence Innovation Organisation — Innovation for Defence Excellence (DIO-iDEX).

The larger strategic realities continue to shape Indo-US engagement. It was evident when the joint statement talked of the need “to ensure freedom of the seas, skies, uphold the peaceful resolutions of the maritime disputes, promote market-based economics and good governance and prevent external economic coercion”. Though there are some divergences between the US and Indian conceptions of the Indo-Pacific, the fundamental reality of the above statement makes the two real partners in their endeavor to promote a prosperous, free and equitable regional order. As India’s economic heft increases, the Indo-US bilateral relationship will transform into one of peers, shaped by mutual interests.

The two issues on which there was much discussion before the dialogue – Russia and Iran – ended up being the footnotes to the broader convergence between India and the US. While tensions remain in so far as their resolution is concerned, it was evident from the 2+2 Dialogue’s first edition that the world’s two major democracies are willing to bet on the multitude of factors that bring them together as opposed to harping on the few challenges on the way.

About the Author: Harsh V. Pant