The new space reforms introduced by the Indian government will reenergise the sector for start- ups and private companies.

Indian Finance Minister Nirmala Sitharaman’s recent announcement that the private sector will play a key role in augmenting India’s space programme will now provide fledgling private space start-ups a real shot at the moon, the stars and geospatial data. Freeing up ISRO from the pursuit of more commercially viable projects will enable it and the Department of Space to devote their resources and energy on the strategic security functions of India’s space industry.

Related stories: Private and public sector to team up and boost India’s flight into space 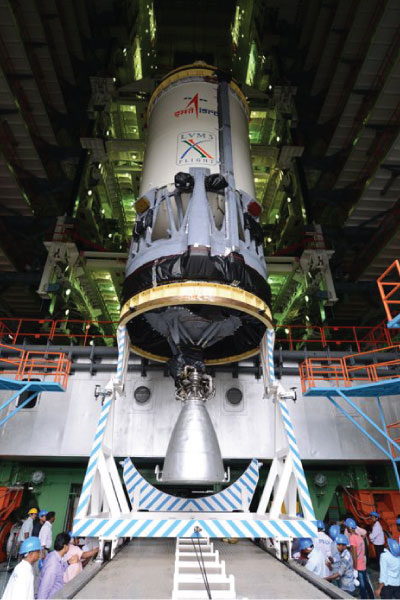 ISRO has long been associated with private companies such as Larsen & Toubro, Godrej and Walchand Nagar Industries. In the last few years, it also began to work with companies like the Bengaluru-based Alpha Design Technologies to build satellites and Bellatrix Aerospace for advanced in-space propulsion systems because of significant capacity deficit.

But the mode of participation that the Indian government has proposed through the new reforms is vastly different and bound to energise the sector so far used to the outsourcing model.

“The maturity and size of the global space industry is heavily dependent on government investment and policies. The largest share of the global commercial space industry belongs to the United States due to higher investments by government and a well-defined space policy that promotes industrial participation,” said Narayan Prasad and Prateep Basu, two prominent faces in the Indian space start-up segment. “Futron’s Space Competitiveness Report (2014) found that not only has the US been successful in leading with globally reputed space companies like Boeing, Lockheed Martin and SpaceX, but it is also leading in creating human capital,” they jointly wrote in an Occasion Paper titled “Space 2.0: Shaping India’s Leap into the Final Frontier” for the ORF.

“India counts itself among the top nations in the world in terms of government space investment, but is far behind when it comes to creating successful private industry that is globally reputed. India’s space budget has increased in size and is one of the largest in the world; however, the lack of an active space industry at turnkey level might have an immense opportunity cost for India in manufacturing satellites and launch vehicles to service the global market. This in effect is also due to the absence of a single Indian company among the top space companies in the world (which in itself is an alarming statistic) that needs to be addressed urgently through policy push under the several grand schemes announced by the current government, such as ‘Make in India’ and ‘Digital India’,” they wrote.

While this assessment came way before the current announcement, the low-cost operations advantage of the New Space industry and start-ups should be a big incentive for the government to make them active stakeholders. An expanding number of stakeholders will also ensure more transparency, along with better regulation and accountability that’s been missing in the space industry.

India’s focus on the commercial partnerships for its space program has been a cornerstone of Prime Minister Modi’s plan to make space a major industry focus under the government’s Vision 2030 document. The 10-point agenda in Vision 2030 includes making India “the launchpad of the world and placing an Indian astronaut in space by 2022.”

With that in mind, the Indian Cabinet last year cleared the establishment of a private institution, the Newspace India Limited (NSIL), under the Department of Space, in line with its efforts to bolster the commercial aspect of its space programme.  The new entity was set up with a paid-up capital of around $1 million and functions under the two ISRO directors. The major goal for the NSIL will be to facilitate the transfer of ISRO technologies to private industries as well as aid in marketing space-based products and spin-off technologies. NSIL is many ways is also a reminder of Antrix Corporation, which was set up in 1992 primarily to facilitate ISRO’s commercial launch of foreign satellites.

Those collaborations are a reminder that the Indian space fraternity has always engaged with each other for the best possible solutions – and the liberalisation of the sector only enhances its allure.

Almost all experts agree that the recent announcements will lead to a new era in India’s Space Age – and to fully enable that the government must also go ahead with reforms of ISRO and space policies – such as the liberalisation of the stringent geospatial data policy that restricts commercial activity and participation in that business area. “India has a lot of geo-spatial data. But most often technology start-ups doing some good work for India do not get the data within India, but end up paying through their nose to get that data from abroad. We want to provide remote sensing data to technology entrepreneurs, but with a sense of caution as it is a very sensitive area. We want to give the benefit to Indian start-ups who are doing pioneering work,” Sitharaman said in her remarks to the media.

With the US and China on the brink of what looks like a new cold war, India has a splendid window of opportunity to level the playing field with them in the space industry. With the perfect partnership between private enterprise and government initiatives, India’s space age is ready to reach for the stars once again. 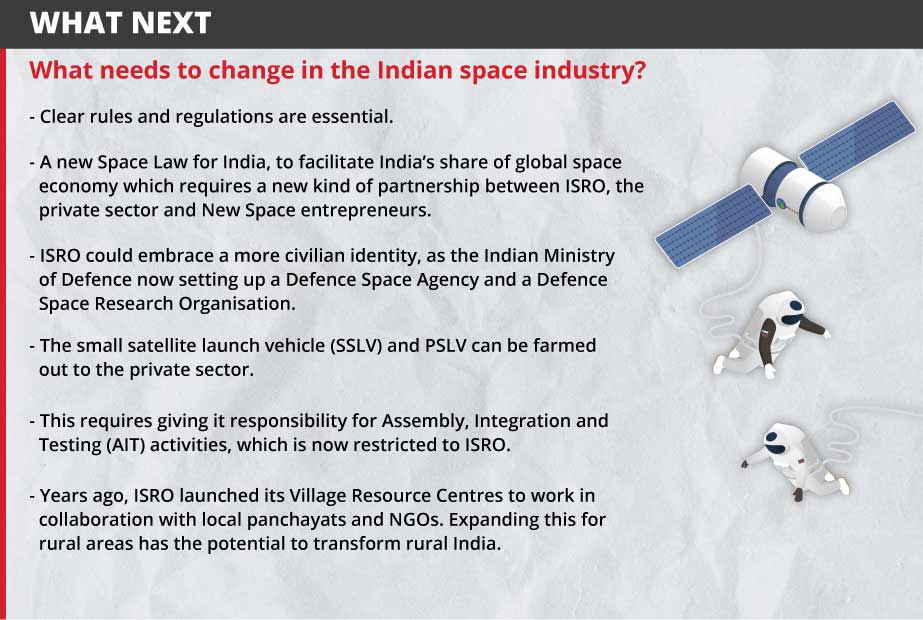