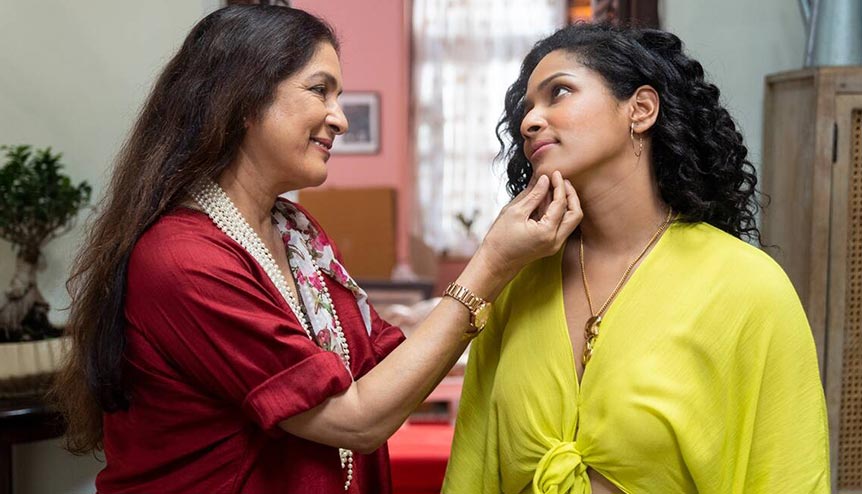 A real-life Indian mother and daughter playing fictionalised selves on screen could easily be a recipe for disaster. Thankfully, when that duo happens to be National award-winning actress Neena Gupta and her fashion designer daughter Masaba Gupta, the drama is a spicy dish worth consuming.

Full points to writer-director Sonam Nair and her predominantly female production team for creating ‘Masaba Masaba’, the surprisingly addictive Netflix series that reflects modern India and its women. Individuality and independence are the key themes here as we follow the trials and tribulations of the Mumbai-based mother-daughter duo; a generation apart but both experiencing obstacles in their personal and professional lives.

While settled in her second marriage and living apart from her husband for the sake of her career, Neena struggles for better roles as a mature thespian in her late 50s. Stereotypical Aunty ji and grandmother parts are the only roles that lay on her horizon (if she’s lucky).

Meanwhile, Masaba is coming to terms with being in her 30s and facing her impending high-profile divorce. Added to this is the unavoidable media scrutiny and aggravated investors who impatiently await the delivery of her new fashion line. The creative and mental blocks experienced by the mother and daughter and how they handle the pressures upon them lead to light-hearted, relatable moments.

The incidents and storylines laid out in the show are undoubtedly borrowed from Neena and Masaba’s real lives, which make them all the more intriguing. For example, we see Neena compete to win the role in a movie in which she plays a pregnant aging mother (basically ‘Badhai Ho’) and become a viral hit by upping her social media profile. Throw in a bunch of comic cameos by industry figures such as Farah Khan, Pooja Bedi and Kiara Advani, you have tongue-in-cheek humour with a film and fashion industry insider nod.

As the daughter of Neena and iconic West Indies cricketer Viv Richards, Masaba’s mixed race is a background fact in the show, mercifully handled with sensitivity and not rammed down the viewer’s throats. Being raised by a strong-willed single mother like Neena, Masaba’s unconventional life choices and attitudes are a reflection of her mothers. The way both women handle their relationships with men is also interesting. While fiercely independent, both show their flaws and respect the role men have to play in their lives, from the bedroom to the boardroom.

If you’re looking for a light-hearted comedy drama that depicts a contemporary slice of high society Indian life (minus the pretentions), ‘Masaba Masaba’ is it. With the eye candy bonus of handsome young actors Neil Bhoopalam and Smaran Sahu playing important supporting roles, this ride is definitely one for the ladies.