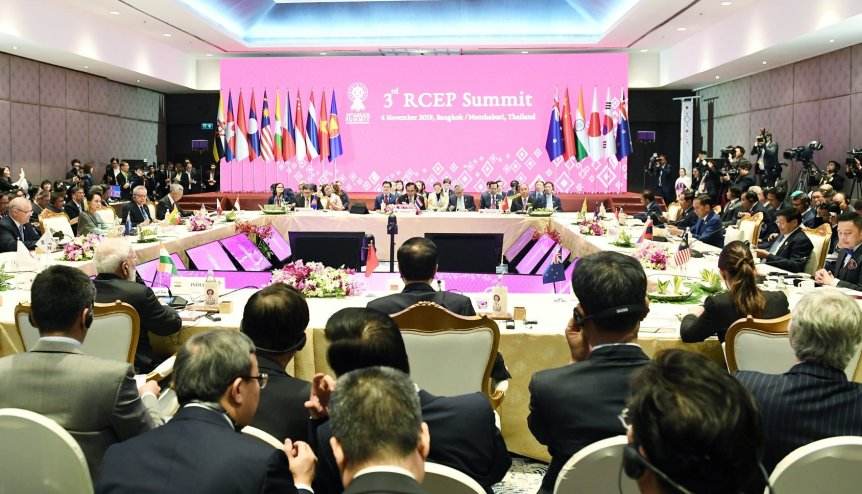 India’s withdrawal from the RCEP trade pact indicates that it remains open for business on its own terms and is also an acceptance that reforms must carry on at pace, writes India Inc. Founder & CEO Manoj Ladwa.

Unanimity and consensus are difficult to achieve in India but Prime Minister Modi’s decision to pull out of the Regional Comprehensive Economic Partnership (RCEP) deal has been welcomed by almost all stakeholders – political parties, businesses and farmers associations.

For me, this sends out two important messages. One, India is open for business but only on its own terms. And two, it is an acceptance that Indian industry and farming are still not globally competitive.

India has indicated that it will be willing to join the RCEP in the future if its concerns are addressed. This sends out a third message: that the government realises that economic isolation breeds stagnation and that the way forward lies in greater engagement and integration with the world.

The RCEP, which is a free trade zone comprising the 10-nation ASEAN, China, South Korea, Japan, Australia and New Zealand will be dominated by China. And India’s entry into this bloc would have the same effect as signing a free trade agreement with China – an eventuality Indian industry can ill afford.

India runs a $105-billion trade deficit with the RCEP nations, of which China alone accounts for more than half. Easing the entry of Chinese manufactured goods, dairy products from Australia and New Zealand and spices from Malaysia and Indonesia could debilitate large sections of Indian industry, the dairy sector and parts of the farming value chain in India.

As leading economist Dr Surjit Bhalla said, India should join trade agreements such as RCEP but only after negotiating from a position of strength. “We should be very cognisant of our own interests,” he said in a recent interview. For example, the RCEP agreement did not provide Indian pharmaceutical products with easy access to the Chinese market. It did not also give India’s services sector – and especially Indian professionals – easer entry into other member states.

Then, it must be borne in mind that following the US-China trade war, the Chinese manufacturing sector is saddled with massive over capacities. Easier entry norms would have allowed it to dump goods in India – to the detriment of Indian industry.

Every trade agreement produces opportunities as well as threats. Under the current circumstances, it would have been very difficult for India to have taken full advantage of the opportunities that this deal would throw us. Therefore, the decision to withdraw from RCEP is, in my opinion, the best one in the present context.

The Indian government has already initiated a number of measures to improve the competitiveness of Indian industry. It must now double up on those measures.

The steep cut in corporate tax rates, making India competitive on this count compared to ASEAN and other Asian peers, is a step in the right direction. There are media reports that the Indian Finance Ministry is toying with the idea of lowering personal income tax rates also. A committee, appointed by former Finance Minister the late Arun Jaitley, has already submitted its report on the draft Direct Tax Code, which reportedly proposes a reduction in rates. Experts expect the government to act on this soon.

Then, real interest rates, that is the interest rate charged on loans minus the rate of inflation in India, at 2.5 per cent are among the highest in the world. Compare this to the average in OECD countries, (-)0.5 per cent, and it will become clear why Indian industry’s competitiveness remains sub-par. This comes under the domain of the Reserve Bank of India and its Monetary Policy Committee. Hopefully, it will take steps to correct this glaring anomaly soon.

I’ve written several times in the past about the urgency to reform and ease India’s factor markets – for land, labour and capital. The government has made a beginning by reforming some of India’s rigid and antiquated labour laws. But little movement is evident in the case of land and capital. Reforming these as soon as possible is a necessary precondition to India becoming globally competitive.

There’s a very narrow window of time during which India will have to achieve these reforms. The good news is that many of these are already works in progress.

Meanwhile, I feel, it will be a good idea for India to aggressively pursue bilateral trade deals with countries such as the US, UK (post-Brexit), Australia and Japan and blocs like the EU. Success in these will give the country the necessary edge to resume negotiations with RCEP, but this time with a stronger hand.