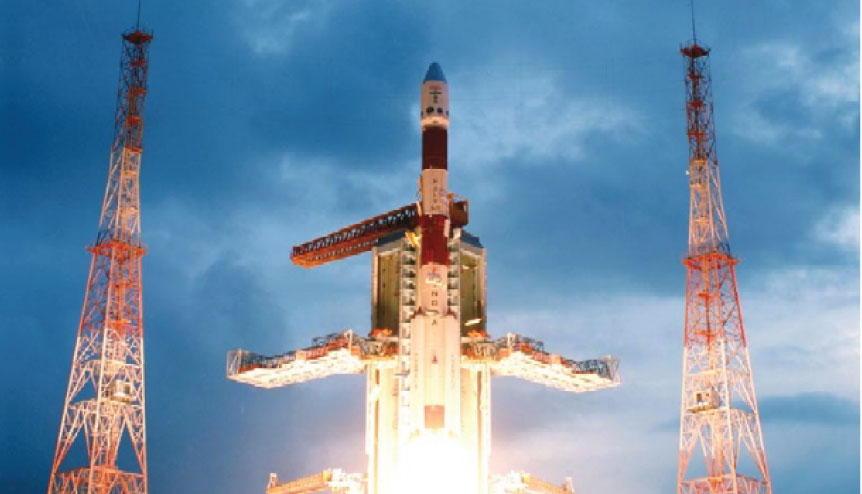 India’s space competitiveness has suffered from the absence of a globally reputed private industry. All that is about to change with the advent of public-private space manufacturing and technology partnership, thanks to the recent liberalisation of the sector by the Indian government.

The quest for exploring the sun, moon and all other ethereal operators in outer space has been an age-old fascination in India. Long before the Indian Space Research Organisation (ISRO), Elon Musk or even Neil Armstrong could set their sights on the moon, legendary lyricists and crooners of Bollywood conquered it several times over – and the result is the stuff of legends such as “Chaudhvin ka chand,” “Yeh chand sa roshan chehra” and “Khoya khoya chand”.

But Indian Finance Minister Nirmala Sitharaman’s recent announcement that the private sector will play a key role in augmenting India’s space programme will now provide fledgling private space start-ups a real shot at the moon, the stars and geospatial data.

The fact that the Indian government intends to share the facilities of ISRO with the private sector was part of the Narendra Modi government’s call for new and bold reforms in an effort to promote its ‘Self-Reliant India’ mission, and is the fourth segment of the $266 billion Aatma Nirbhar Bharat Abhiyan (Self-Reliant India) economic stimulus package. The decision also opens up India’s burgeoning space sector to potentially lucrative investments from entrepreneurs the world over. 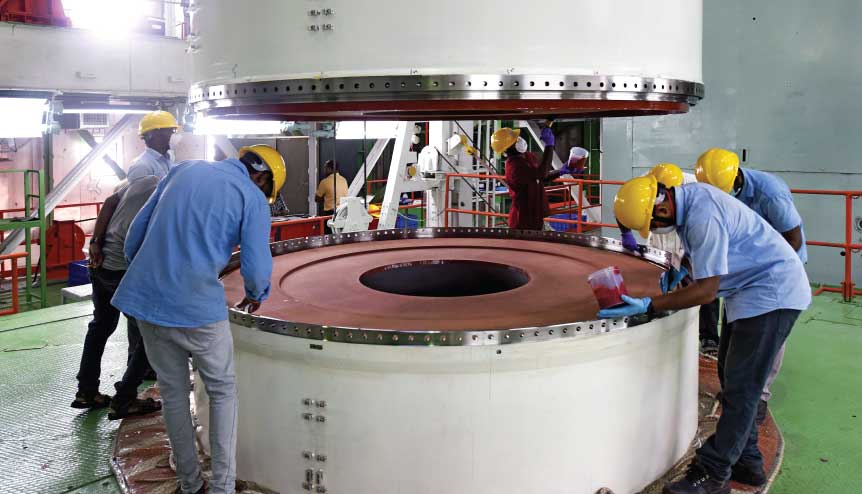 India has always been a pioneer of low-cost innovation in space science and exploration, with ISRO fabulously punching well above its weight despite a shoestring budget of less than $2 billion. Consider the following:

However, the government’s decision also points to a pragmatic realisation that the premier space agency by itself, does not have the capacity in terms of capital, skills or equipment to develop and exploit all benefits of the space industry. Opening up the space sector will therefore not only make it more competitive, but also level the playing field for companies when competing and cooperating with India’s large state space sector, unlocking a great scope for private investments.

A further boost for this is the Minister’s announcement that “future projects like planetary explorations and outer space travel (such as future Chandrayaan, Venus and Aditya missions) will be opened for the private sector. The private sector is being given a good access to the space arena so the industry and ISRO can work together for a self-reliant India”. 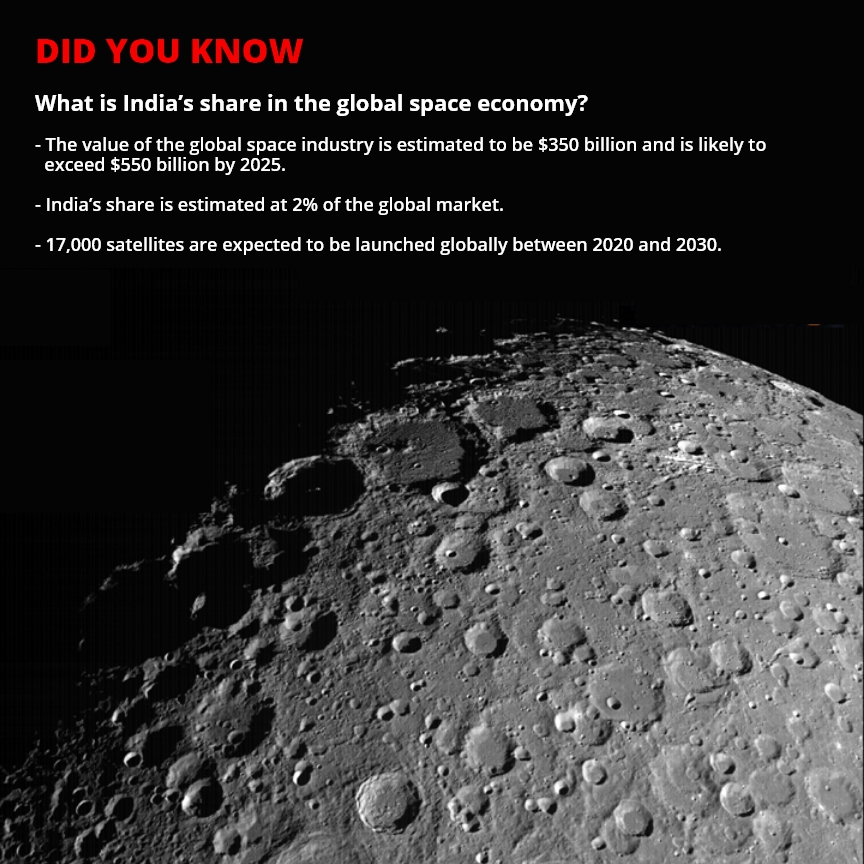 Commenting on the shape of India’s space policy, Utkarsh Narain, a research analyst with the Takshashila Institution, observed in a policy paper earlier this year: “Since international law guides the actions of sovereign states and not private enterprises, the Indian State needs to harmonise international law in state law for it to be applicable to private enterprises and individuals. India is a signatory of the 1967 Outer Space Treaty and a member of the United Nations Committee on the Peaceful Use of Outer Space (COPUOS). India has also signed the Rescue Agreement, the Liability Convention, and the Registration Convention. All national space activities must be in accordance with the aforementioned four treaties, international law in general, and the UN Charter in particular. Article 51 of the Constitution of India mandates to foster respect for international law and treaty obligations. However, the current regulation of space activities in India is disjointed and done on a piecemeal basis. Therefore, a coherent space law which clearly and explicitly lays down rules for space activities, carried out by any person in India, is required.” 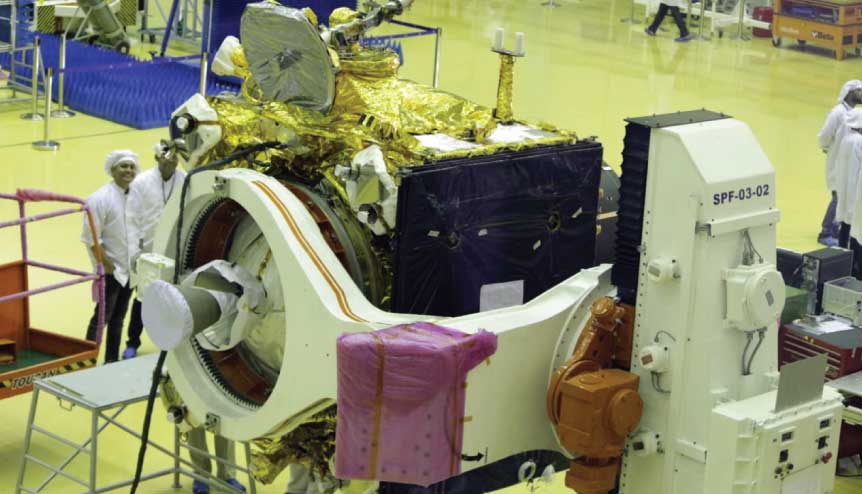 While the government’s bold new direction certainly makes a strong case for unlocking the potential of private capital and skills in the space sector, according to Gateway House Fellow Chaitanya Giri, India’s antiquated endorsement of the 1979 Moon Agreement is also shackling its true potential for economics-driven space exploration.

“Under the Artemis Accords, the US is planning an international coalition to extract natural resources from the Moon. China is concurrently planning an Earth-Moon Special Economic Zone… India must immediately do away with Cold-War era, vintage whims of global commons,” Giri wrote in a Gateway House commentary shared widely within the community.

“Since the beginning of the country’s space exploration programme in 1999, Indian space policymakers have planned for the utilization of lunar resources and long-duration human presence in outer space and on the Moon. With successful missions, Chandrayaan-1 and Chandrayaan-2 behind it, India is now preparing to land on the South Pole of the Moon with its Chandrayaan-3 mission, scheduled for 2021. Simultaneously, India is also scheduled to undertake its maiden orbital human spaceflight test – Gaganyaan – by 2022 and has plans for an Earth-orbiting space station by 2030,” according to Giri. “Being the third largest economy in the making, India need not conceptually side with any of the space groupings but make pragmatic collaborations,” he wrote. 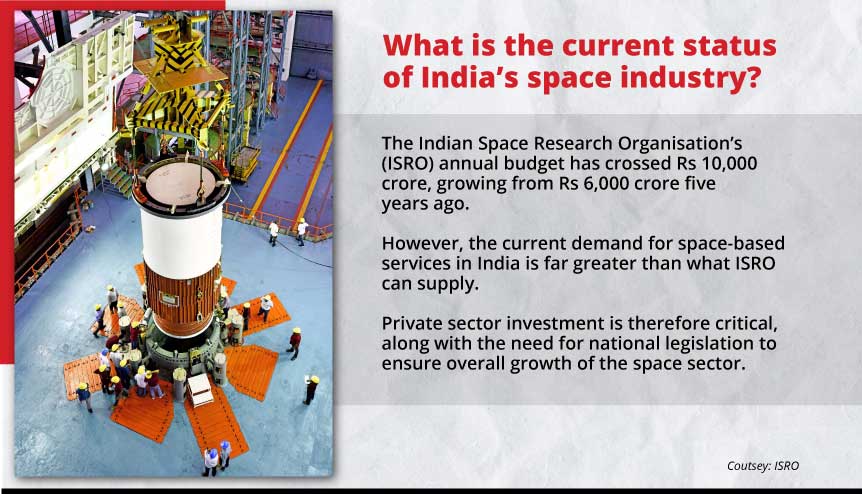 Indeed, the government’s active intervention in the space industry is a testimony to the urgency with which India is ready to tackle to these challenges and transform the sector into an active global leader rather than a passive bystander. The driving principle behind the entry of the private sector is not only enabling commercial enterprise but also to modify the sectoral set-up where the same agency has traditionally undertaken promotion, commercialisation and regulatory functions – which inherently makes it less effective despite the brilliant efforts of its scientists. Freeing up ISRO from the pursuit of more commercially viable projects will also enable it and the Department of Space to devote their resources and energy on the strategic security functions of India’s space industry.

* Tomorrow, a deep dive into various areas of investment within India’s space sector.