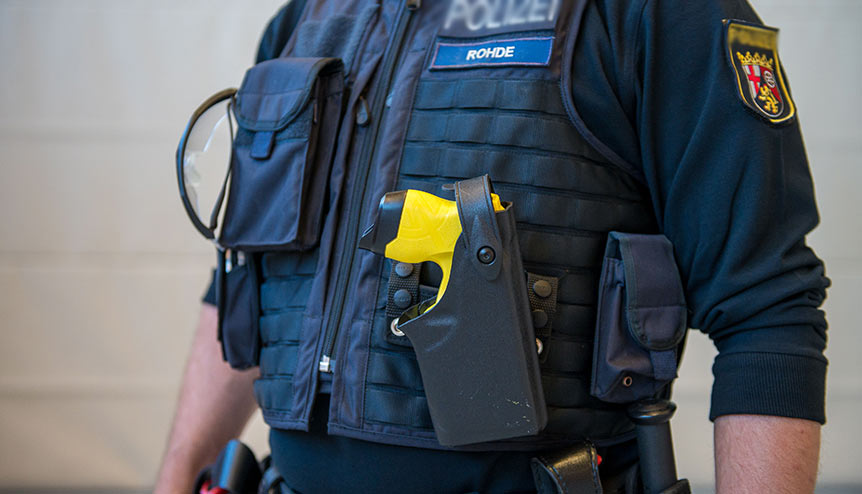 Taser 7 is said to be more accurate, faster and compact than previous models and also reduces costs for forces by replacing disposable batteries with rechargeable ones. Upon procurement by 43 police forces across England and Wales, officers can start training with the new model within weeks, the Home Office said.

Priti Patel said: “It is sickening that our brave police officers face assaults and attacks as they work tirelessly to keep us all safe.

“They are our protectors and I will do everything in my power to give them what they need to keep themselves and the public safe. This new Taser model will provide a safe and effective tool for apprehending criminals.”

Taser guns are electroshock devices approved for use by police forces in the UK for the purpose of momentarily incapacitating perpetrators of crime and are described as an important tactical option for police in potentially dangerous situations. In September last year, the UK government announced a £10-million ring-fenced fund to significantly increase the number of officers carrying Taser.

“The authorisation of the new Taser 7 model has passed rigorous independent scientific and technical assessments, and we are pleased it has received authorisation to be considered by forces. This testing ensures all necessary safety standards are met, alongside continued operational reliability when using the device against those who are violent or threaten violence,” said Deputy Assistant Commissioner (DAC) Lucy d’Orsi, the National Police Chiefs’ Council lead for Less Lethal Weapons.

“The deployment of Taser will differ from force to force due to many factors. The accountability of Taser is important to Chief Constables, who have undertaken a commitment for every officer who patrols with Taser to be equipped with Body Worn Video. Independent research is also beginning to further assess the use of Taser, and the proportionality of its use,” DAC d’Orsi said.

Only specially trained officers will be able to use the new device and those who are already trained to use older models will require new training for the Taser 7. Police Chief Constables will decide how many officers in their forces can carry the new devices based on strategic assessments of threats and risks in their force areas.

Chief Constable Mike Cunningham, CEO of the College of Policing, said: “Policing is becoming ever more challenging and ensuring officers have the training and support needed to keep themselves safe while protecting the public is rightly a priority for the service.

“All officers carrying Taser, regardless of their rank or role, will continue to be trained to the high national standards set by the College.”

The Home Office said that forces will be required to complete an additional record every time a Taser 7 device is used, to monitor the effects and performance of the device.